The Canberra National Arboretum, by TCL, Canberra, Australia. The loss of habitats and the extinction of species are prevalent topics among environmentalists today. We are witnessing the largest extinction crisis since we lost the dinosaurs. According to the World Wildlife Fund, at least 10,000 species disappear every year — forever. At the same time, awareness of the amazing diversity and the imminent danger of its loss are probably higher than ever. Multiple organizations and even whole countries are working against the threat of extinction and habitat loss. Australia is one such notable example.

In January 2003, a wave of fires wreaked havoc on the Australian mainland and its unique forests. Saddened by the loss, the ACT Government decided to act instead of grieving: It developed a proposal for an International Arboretum, to be established on a 250-hectare site six kilometers from the center of Canberra, at the western side of Lake Burley Griffin, an area offering unique, panoramic views over the capital. WATCH: National Arboretum Canberra: World Landscape of the Year 2014

The site included four existing forests, which were included in the final master plan: Quercus suber, planted between 1917 and 1920, which became Forest 1; Cedrus deodara, planted between 1917 and 1930 and again in September 2010, at present Forest 11; Pinus radiate, currently Forest 76; and finally other native trees and plantings, which now make up Forest 2. In 2004, an international design competition was held and in 2005, the winner was announced — the Australian landscape architecture practice Taylor Cullity Lethlean (TCL) in cooperation with Tonkin Zulaikha Greer’s (TZG), for their “100 Forests/100 Gardens” concept. The Design The original vision has its roots in the plans and dreams of Walter Burley Griffin and Marion Mahony Griffin, who 100 years ago drew the first plans for an arboretum that would include iconic trees from all over the world. 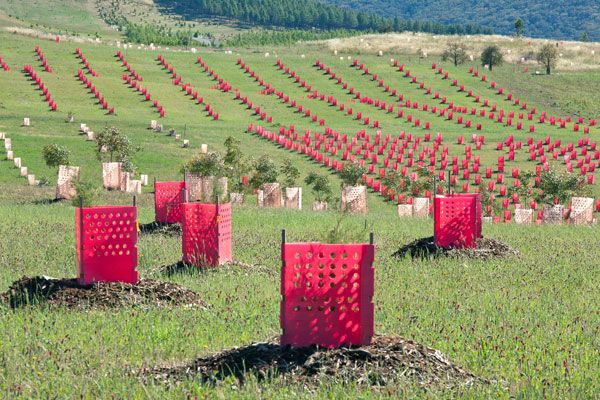 All of the 100 forests are arranged differently, the qualities provide distinct spatial arrangements that respond to species horticultural requirements and many cultural themes. Photo credit: Ben Wrigley

The Winner The winning master plan has sustainability at its core, with aesthetics coming in second. One hundred of the world’s most endangered tree species, chosen by experts from the IUCN’s Red List, are creating an invaluable seed bank and a viable population to preserve vulnerable and endangered species. The environmentally friendly irrigation system supplies water to all of the plants of the arboretum. Other Articles Featuring TCL:

The design’s orthogonal grid is superimposed bravely over the rolling hills of the impressive landscape. The sculptured earth terraces are filled with trees grouped into 100 single-species forests intertwined with 100 gardens. The Layout of the Forests Each forest consists of 200 to 3,000 trees and covers two to three hectares. The design’s form is simple and geometrical, with terraces linked by a cascading stream and a fully accessible pathway. It is supposed to not interfere with the natural landform nor with the planting. The individual forests are planted in a grid, arranged across the landscape to align with a civic axis created by the Burley-Griffins. 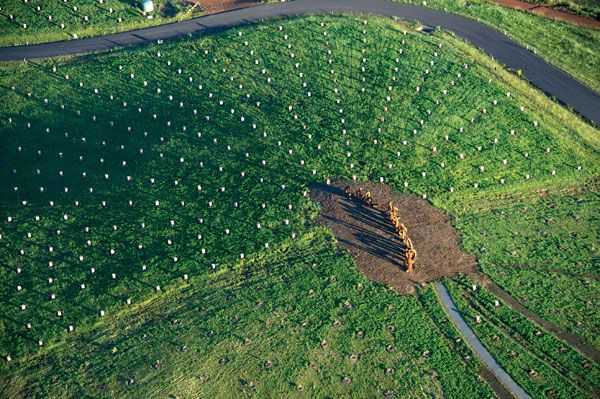 The Arboretum is host to a series of large sculptures that will, over time, be discovered within the forest landscape. Photo credit: John Gollings

The design’s form is simple and geometrical, with terraces linked by a cascading stream and a fully accessible pathway. It is supposed to not interfere with the natural landform nor with the planting. The individual forests are planted in a grid, arranged across the landscape to align with a civic axis created by the Burley-Griffins. The entry road takes visitors from the main entrance directly into the forests. The twisting path immerses them in the tree–filled space, leading them upward into the central valley clearing, where 12 hectares of sculpted and terraced landform reaches up toward the 900-person Visitor’s Centre designed by TZG. Their Royal Highnesses, the Duke and Duchess of Cambridge Playing a Part The planting along the path is particularly special: The ceremonial trees have been planted by dignitaries and leaders from Australia and around the world, including Their Royal Highnesses, the Duke and Duchess of Cambridge. The sculpted earth creates the Events Terrace — a wonderful, open public space offering wide views of the neighboring capital. Finally, the gabion-lined cutting leads to the Visitor’s Centre, hosting service spaces, a bonsai garden, sheltered seating areas, a cafe, meeting rooms, site administration, and retail spaces. 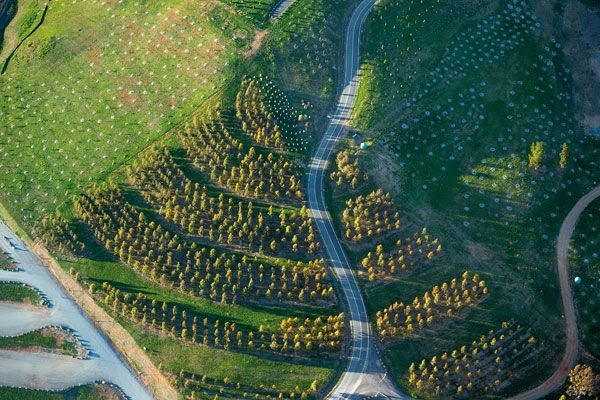 The layout of trees are distinct for each forest and are designed based on their botanical or cultural qualities for each species. Each TCL designer provided ideas for the 100 forests, with the result of a patchwork of ideas. Photo credit: John Gollings 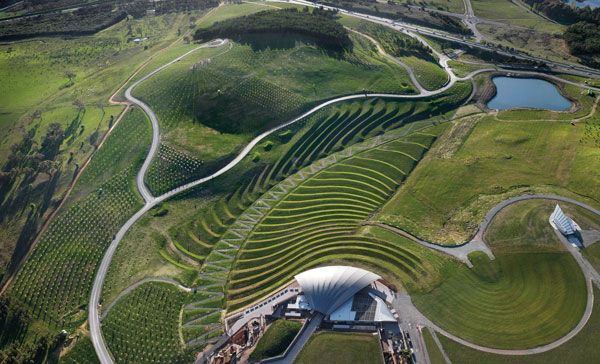 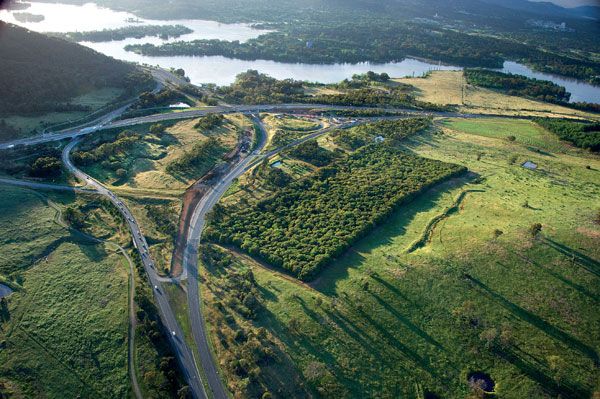 Cork Plantation that survived the 2003 Canberrra Fires. This existing plantation provided an insight into the potential of the immersive 100 forest concept. Credit: John Gollings

Each forest accommodates a range of visitor facilities, such as picnic areas, art installations, and secret gardens. The number and variety of such areas will grow with time and will be adjusted according to the community’s needs. The Famous Playground Presently, the site includes, besides the aforementioned Visitor’s Centre, art installations by renowned Australian artists and a recently completed, state-of-the-art children’s playground. The imaginative Pod Playground, situated next to the Visitor’s Centre, is one of the best playgrounds opened for young users in recent years. 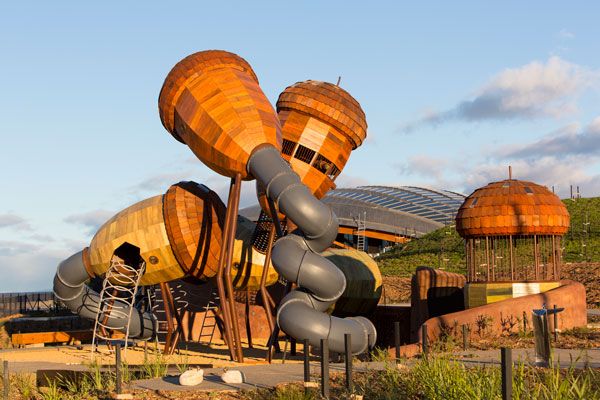 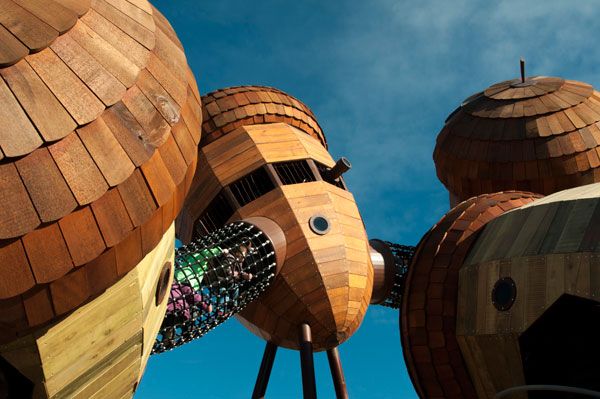 Rope tunnels connect four of the Acorns together, creating an clambering play element for children to explore the Acorns. The enclosed rope tunnels also allow heights to exceed 2.5 metres from the ground. Photo credit: Gemma Fennell

The Development of the Canberra National Arboretum

The first trees were planted in 2006, and the arboretum was opened to the public on Feb. 2, 2013, as a centerpiece of Canberra’s centenary celebrations. All of its 100 forests were already planted with trees such as Washingtonia filifera, Liriodendron chinense, and Wollemia nobilis. However, it is not nearly completed — the National Arboretum is meant to continue to develop and grow over time. Its potential and possibilities are unlimited. 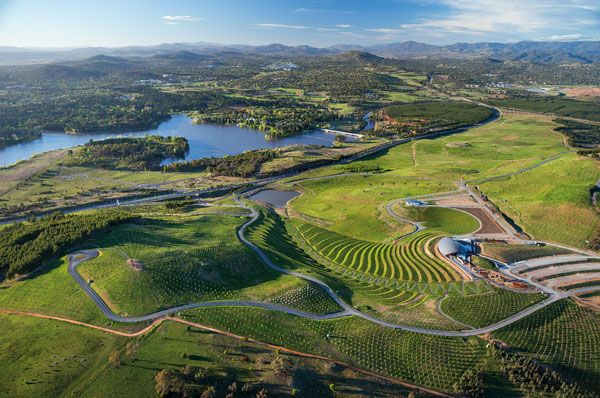