Advancements in ecology and environmental studies have been particularly prevalent over the past few years. We recycle waste on a daily basis in the hopes of preventing past mistakes, because decades ago we did not understand the full extent of pollution. In the spirit of reusing waste, we have adapted contaminated sites to become useful once again through many means of cleansing and renovating the soil and surrounding structures. Here is a list containing some industrial landscapes that, helped along by Mother Nature and man, have become core to the surrounding communities, remembering the past while embracing the future. 10. Concrete Plant Park — Bronx, New York 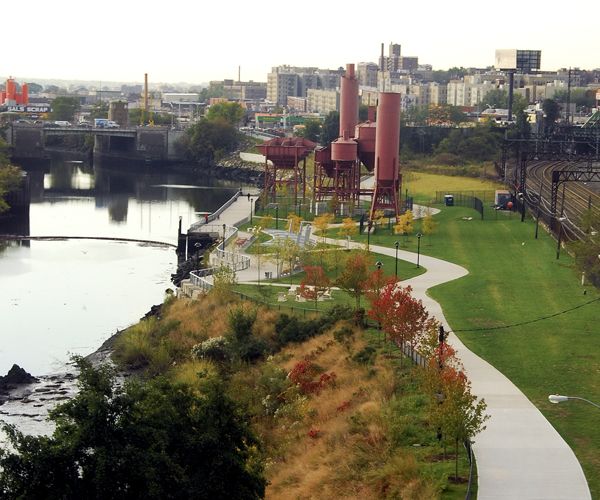 The Concrete Plant Park was once a concrete batch mix plant located on the southern side of the Bronx River, along the western shore. The park is surrounded by large bridges and is cut off from the mainland by an Amtrak line. Community is at the heart of this renovation, as it is packed with chess tables, a beautiful waterfront, a boat launch, and a busy bike trail — all you need for a lazy Sunday. 9. Rincon Park — San Francisco 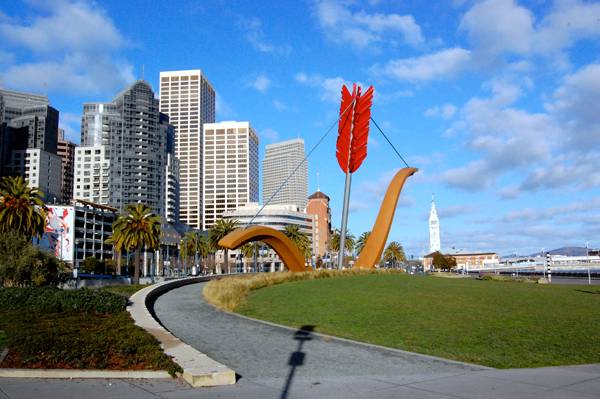 “Creative Commons Rincon Park and Cupid’s Span in the Embarcadero, San Francisco, California, USA” by Dewet is licensed under CC BY 3.0

Rincon Park, located just underneath the Bay Bridge, is truly a memorable park due to its large sculptural bow and arrow in the center created by Claes Oldenburg and Coosje van Bruggen. A past of industrial and commercial use left the waterfront with low levels of contamination. After renovation, this park gives visitors a base to view some of the iconic aspects of San Francisco, such as San Francisco Bay, The Bay Bridge, and views across to Oakland. With open green space, walled seating, and the surrounding bustling area, this park shows it does not have to be large to make an impact! 8. Glass Beach — Fort Bragg, California 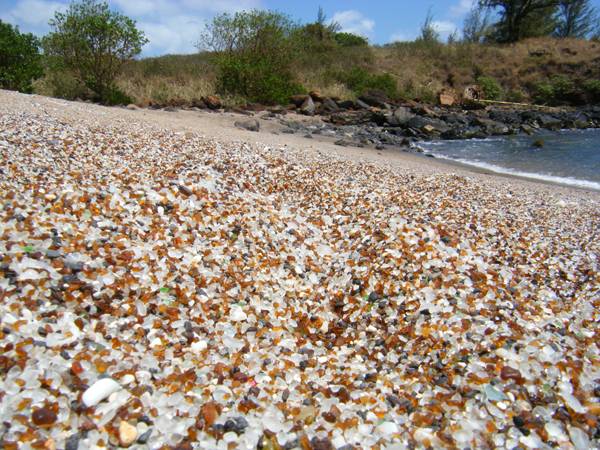 “Creative Commons A beach in the industrial section of Hanapepe, Kauai called “Glass Beach” due to tons of smooth glass pebbles on the beach” by Travis.Thurston is licensed under CC BY 3.0

Glass Beach is situated in Fort Bragg. After years of being the site of dumped glass, this beach has morphed into a very interesting result, as Mother Nature shows us her power. The beach is littered with smooth glass pebbles, creating a beautiful and colorful park. 7. Thames Barrier Park — London, England 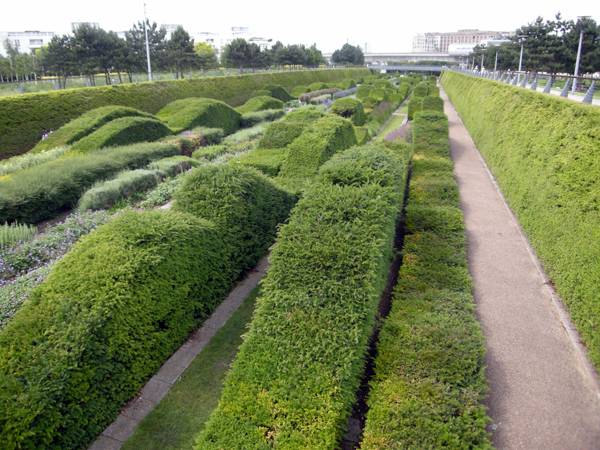 “Creative Commons Thames Barrier Park” by Matt Kieffer is licensed under CC BY 2.0

Thames Barrier Park was an industrial site for chemical and dye works, leaving the soil and groundwater contaminated. Today, it is a very different site, with weaving hedges representing the site’s dockland heritage. The park has strong contrasting diagonal lines, dividing up a rectangular park running toward the river. The park not only caters to tourists, but also welcomes the community surrounding the park, as it boasts a playground, fountain plaza, and a basketball court. There is a strong historical theme throughout this park, strengthened by the choice of vegetation and its location close to the docks. 6. Ayalon Park — Tel Aviv, Israel 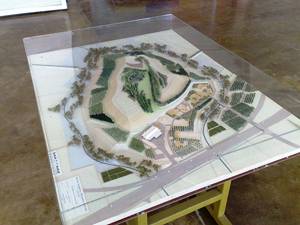 “Creative Commons Ayalon Park” by Israel Peled is licensed under CC BY 3.0

Ayalon Park, named after the Ayalon Valley that lies at its feet, was the site of Israel’s largest landfill. This project turns 16 million cubic meters of waste into a 2,000-acre park, bursting with eco-friendly amenities such as a biological waste treatment plant, a garden waste recycling system, a battery collection facility, and many more ecological facilities. This project is set to continue until 2020. 5. Landschaftspark — Duisburg Nord, Germany Rather than reject this park’s polluted past, Latz and Patner embrace and accept its industrial history by using the remaining structures and cleansing the remaining contaminated soil through phytoremediation. The existing and past uses were carefully considered as they chose different uses for the remaining structures. Old concrete walls were morphed into a rock climber’s ambition and an old gas tank transformed into scuba diving pools, with the former steel mill creating the main square. 4. Trail of the Coeur d’Alenes — Silver Valley, Idaho Trail of the Coeur d’Alenes is a rail trail running through Silver Valley in Idaho. This trail was a positive outcome from the remaining residue left behind from the area’s silver mines. After the removal of the rails, the 73-mile track was transformed into a bike and hike trail with stunning sights along the paths. This trail won the 2006 EPA Region 10 Phoenix Award for achievement of excellence in brownfield redevelopment.

“Creative Commons Trail of the Coeur d’ Alenes” by Robert Ashworth is licensed under CC BY 2.0

3. Alumnae Valley — Wellesley College, Washington This 13.5-acre campus site was transformed into a beautiful and lavish green valley consisting of various sections all coming together to create a unified landscape. The site was an environmental concern as lead paint, oil, and coal-tar was found on site. After decontamination, the college started a seven-year construction, altering the 175-space car park into a sloping, lush valley embracing the college within. See more here 2. Westergasfabriek Culture Park — Amsterdam, Holland by Gustafson Porter 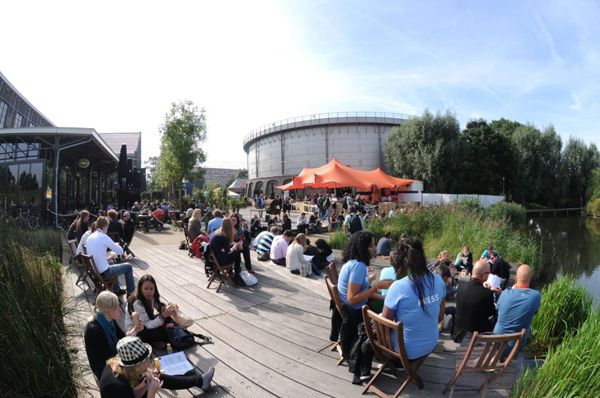 In the late 19th century, two coal gas factories were built in Amsterdam along the waterways. By the time both factories ceased production in 1967, the site was heavily polluted. During the clean-up phase, they found tar, minerals oils, asbestos, and cyanide. Now stands a stunning 14-hectare city park designed by Gustafson Porter. This park stirs all the senses using the variety of spaces within, boasting marsh ponds, wildflower meadows, large open green spaces, and waterside decks. This park runs in conjunction with Bretten Zone,  a 10-kilometer stretch of waterways that encourage amphibians, reptiles, and fish to move freely within the waterways, another outstanding accomplishment that only adds to this park. 1. Freshkills Park — Staten Island, New York New York has made a leap forward, dealing with the iconic landfill on Staten Island and turning it into a new park for New York City. Freshkills Park is a 2,200-acre park, symbolizing renewal and restoration within New York. The area is divided into various terrains; 45 percent of the site is wetlands, open waterways, and unfilled lowland areas, creating a difficult and challenging space to consider. This space redefines New York parklands by introducing the community to the surrounding ecology. This short list of  industrial landscapes portrays the reuse of these hazardous sites and how they were turned into town attractions. They creatively engage in their industrial past while promoting a change for the future. These are proof of our leap forward into environmental studies in the hope of protecting our already stunning landscapes. Article written by Lisa Tierney. Featured image; courtesy of  Gustafson Porter Published in Blog