Just a week ago, I had the pleasure of interviewing Professor Nigel Dunnett from University of Sheffield about his experience in working as one of the lead horticulture and planting design consultants for the 2012 London Olympic Park, along with fellow colleague James Hitchmough. Whilst being in the landscape ecology profession for many years, carrying out the planting and designing for the Olympic Park has been the most memorable and challenging projects for Nigel. Dive into his insights on being part of a project of a tremendous scale…

James Hitchmough and I were taken on as the main planting design consultants of the park. What they didn’t want to do was have something very traditional- looking at UK’s heritage and trying to recreate some sort of a Victorian Park. They wanted the Olympic Park to show what Britain might be like in the future. So that’s very much what they did and took us on. 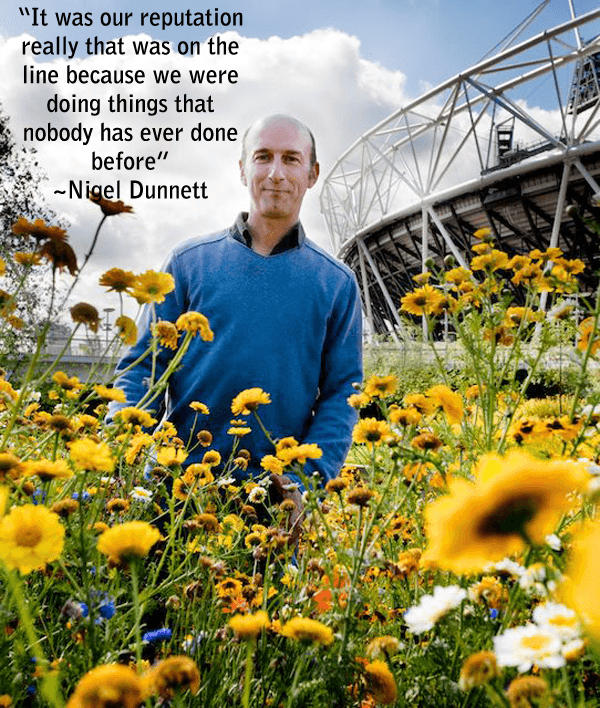 The great thing was that we were part of the design team from the start so we were working with all the landscape architects and having the influence over the whole master plan. What was also great is that because we had such a long involvement, we were able to work with the contractors and be on site for the last two years to implement everything and to look after it. We went from a very conceptual thinking to doing the drawings through actually being on site- it was very exciting!

We were working with the main Masterplan. We were inspired by the UK’s natural habitats and making designed versions of them- more enhanced, more colorful, more visually strong– but still very much with an ecological framework so putting plant communities in the right situations.  Within the 2012 gardens, we were able to look at fantastic landscapes around the world and produce stylized designed versions of them, which were very naturalistic yet very architectural as well. So we went from celebrating the UK’s natural heritage in the wider part of the park to the designed versions of fantastic landscapes from around the world. We chose four different regions to represent biodiversity hot-spots  from European influences, which was closer to home, to North America, to Asia, particularly China and Japan, and then South Africa, Australia and New Zealand. They were all starting points for doing a stylized design of these idealized beautiful landscapes. 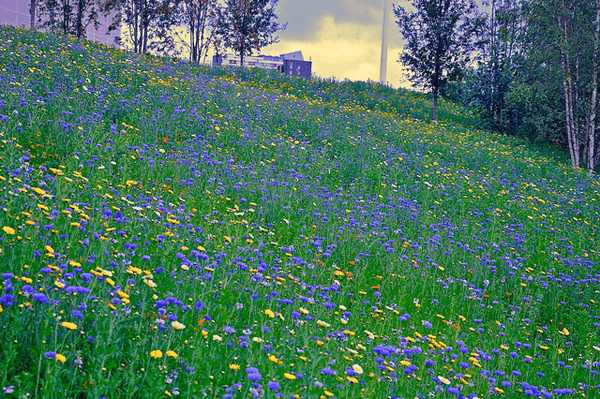 The first was that it all had to look good for the opening ceremony. It was incredible to be working for five years and just zooming on one day, and to be told that that was all that mattered. Of course that meant that it didn’t really matter, for this year, what happened in the spring and early summer and autumn and winter. We were just designing for such a small time scale. To make wildflower meadows flower for late summer, we had to push everything back. The biodiversity action plan was the main thing and we all had to meet that. We had to make every square meter that we worked on have some sort of a biodiversity habitat value. The idea of having the 2012 gardens in the park was not there to begin with and that was something we had to push for. The planners really wanted it to be native plants only and to recreate the countryside. That was the initial idea that they had so we had to really fight for the idea of the gardens, which had to be beautiful and fantastic for millions of people visiting- like a festival landscape. 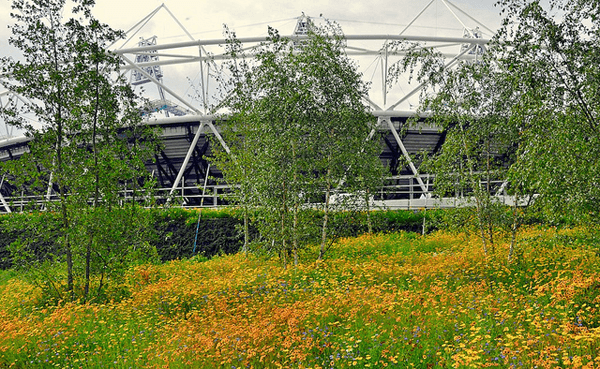 Then of course having millions of people over for five weeks was a huge challenge, which did result in quite a lot of damage. The pressures were so great, there was no second chances so it was quite a stressful thing.  But there were also backup plans if things did go wrong. The final back-up plan was to cover everything with grass and we always had this thing in the back of our heads that if we didn’t get this right, we would put grass everywhere. It really was only until the very last minute that we were able to relax and think that well actually, this is going to work. The weather was also very difficult. We had the two driest winter ever, so we had water restrictions. Then suddenly it switched and we had the wettest summer for 100 years or so and the cold in the spring so it was a challenging weather. In the end, having a wet summer was king of useful to us because it was good for the plants. Now it’s very challenging on personal terms to have a normal life really during that time! It was our reputation really that was on the line because we were doing things that nobody has ever done before with all the seeding of the naturalistic planting. So we were going throughout thinking yes this is going to work but I think we both knew a little bit that it might not work. So yes, it was very challenging. 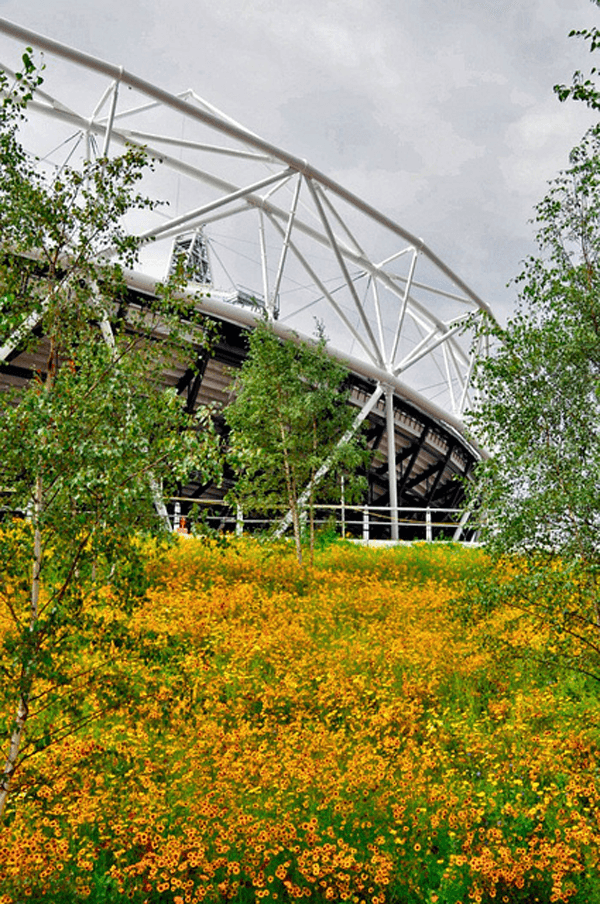 It was a huge regeneration project so the whole basis of the design was to regenerate the area and attract a lot of new investments and put new facilities. That was always the basis of the design. In that sense, yes, the whole philosophy was to improve the environment to what was a very disadvantaged area. Now beyond that, of course, there were lots of small-scale problems within the local community. A lot of route ways and footpaths were closed off so people couldn’t get around the area. There was also a big thing about allotments, which were taken over and people displaced from there. James and myself were purely there to do the planting and I suppose our viewpoint was that it was such a fantastic thing that those local problems were for the local politicians to work with. I think in the future, part of the park you will have to pay to get into. But the old footpaths and route ways through will be opened up again. There will be a huge amount of economic activity happening on the area so I think on the long term it will be very beneficial but of course, on a short medium term, there were problems to be resolved. I think the big picture is that, this kind of intervention is a massive thing to happen in that kind of area.  The Olympics is such a big thing that this kind of thing is bound to happen. 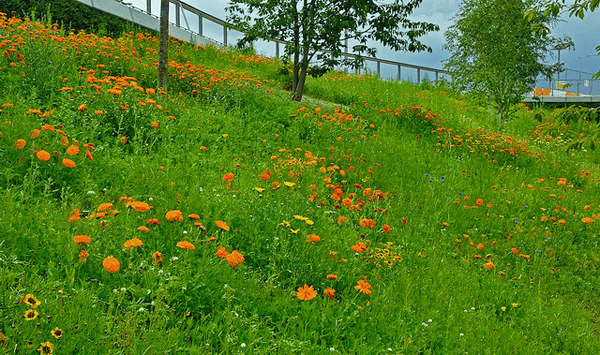 Absolutely, if not more! It was a big experiment and what we did has never been done on such a scale before. I think it was very successful. The public response was so huge that it was more than the vision that we had- the way that the park has been seen as such a great representation of the UK and its landscape. And the way the public responded to the landscape, well, we had no idea that it would be like that. We knew it would be good but we didn’t know it would be that good! The Olympic Park was and continues to be a project of epic proportions, with its legacy impacting upon generations for decades.  The management and design implemented by Nigel Dunnett and his colleagues goes to show the colossal amount of input and co-operation needed to achieve a vision.   Find out more about the 2012 Gardens in the Olympics Park here on Nigel’s website. Interview conducted by Win Phyo