Chimecco Chime Bridge by Mark Nixon. The beauty of sound, movement and vision blend together in architect, artist and designer Marc Nixon’s interactive instrument and kinetic sculpture- ’Chimecco’. His creation is an installment of bell chimes that resonate a sweet melody. These giant and playful wind chimes hang below a bridge that is surrounded entirely by woodland. Passersby will experience a musical discovery as a harmonious sound escapes the chimes depending on the wind conditions. The London designer, wanted a presence of secrecy yet exposure within the elements of this kinetic sculpture. 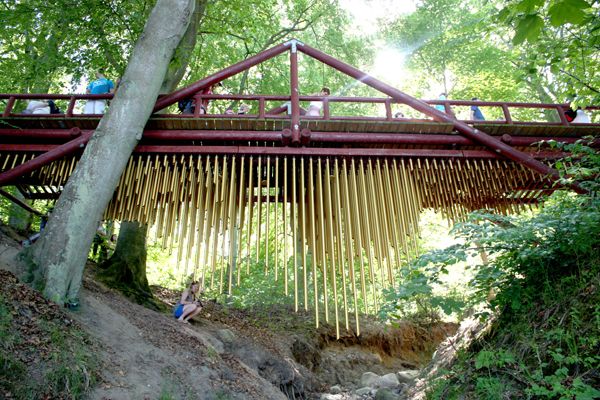 “Chimecco hides silently beneath the bridge in the forest until activated by human movements or the wind causing it to sing, dance and play with the senses.” – Mark Nixon The chime bridge acts as moving art The piece was constructed from 600 50mm diameter gold anodized aluminum pipes ranging in length from 120 3750mm to achieve the contour hugging, organic shape. These pipes hung between the bridge’s wooden planks, attached with raised, spring-loaded screws. The golden metal chimes followed the contour of the gully and, hidden from the pedestrians’ views, only their sound alerted people to their presence. 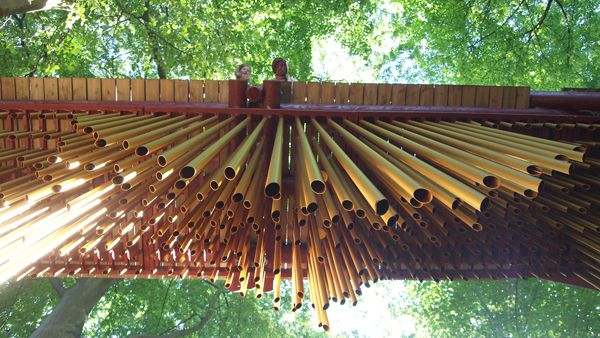 The sculpture was exhibited at “Sculpture by the Sea” in Aarhus, Denmark– one of the most popular outdoor sculpture exhibitions in the world. The design was selected as one of the winners in an open competition of 350 submissions. Mark Nixon, with a team of assistants, spent a month putting the piece together. Throughout the most of June 2011, this sculpture piece was sited along a three mile sea-side stretch of the Jutland peninsula. Viewers were encouraged to venture beneath these golden tubes to move the sculpture by hand. 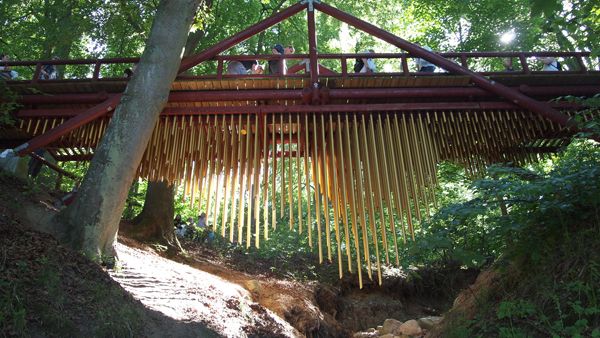 The sculpture became a reality from three conceptual ideas. Firstly,  the idea of music and interaction as a catalyst for conversation and play. On  top of the bridge are interactive nodes that allow people to ‘play’ with the instrument. However, the piece also somehow remains untouched and doesn’t allow people to interact in its totality. Secondly, there is a hidden element to the design. The sculpture will remain unseen unless the wind creates the various melodies. Because of this, there certainly is a dynamic mystery of performers vs.  audience that is created. The last concept is the alluring mixture of human and natural movement that takes the element of interaction to another level! Designer Mark Nixon says:  Nixon states ‘The sculpture is ‘hidden’ beneath the bridge. A constant varying in wind conditions on the site mean that the sculpture will hide and reveal itself through the creation of sound when the wind chooses to blow. Someday the sculpture will be discovered, creating a beautiful moment of realization’. Related Articles:

The beautiful factor in this design element is the simplicity and the almost secretive nature of this object, as well as the form of the ground underneath that is animated in the sculpture. To connect nature with sound is genius; to contrast secrecy with interaction is a hard thing to achieve, yet we see this done sensitively here. Mark Nixon’s sculpture doesn’t scream for attention- it brings music to a natural habitat enhancing the beauty of nature in ways we have never done before. 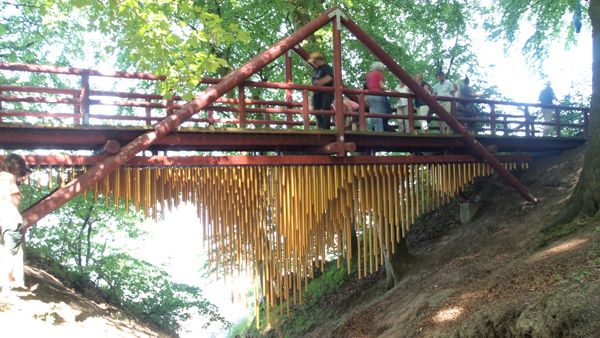 Who knew something so functional and everyday can be transformed into a beautiful object that enriches our lives? Mr. Nixon has succeeded in displaying a glorious and interactive piece of art. Recommended Reading: