Millenary Park by Ujirany / New Directions Landscape Architects, in Budapest, Hungary. The story of the rehabilitation of a former industrial site is not a new one. It usually involves demolition or re-use of existing structures and may require environmental remediation or restoration. The potential of these “brownfield” sites provides exciting opportunities for landscape architects, as they can design the landscape to transform spaces into habitable public assets. Former industrial sites also hold within them the memory of past technology and its place within the urban context. For this article, we shall tell this story through the powerful creation of Millenary Park in Budapest.

Millenary Park is located in a dense residential area in Budapest on the site of the former Ganz Works factory. The factory was home to one of the most innovative engineering firms of the 19th century, making it an important part of Hungary’s history. [contextly_sidebar id=”ZXv3wgpbtP8j7oXMuV0SvC2fusJlivrz”] It was originally located on the outskirts of the city, amongst vineyards and forests, but as the city grew, it became surrounded by a residential suburb and thus needed to be moved. This presented the opportunity to use the site as a public asset. It was decided to coincide its development with the Hungarian millennium in 2001, marking 1,000 years since the first Christian king, St. Steven, was crowned. The Industrial Site Dilemma As with most industrial sites, the first phase of development involved deciding which elements would be demolished and which would be kept. By retaining and re-using 30 percent of the existing factory buildings, a sense of memory and cultural history was maintained. This approach also allowed for unique experiences to be created through the contrast of historical elements and materials with contemporary form and function. 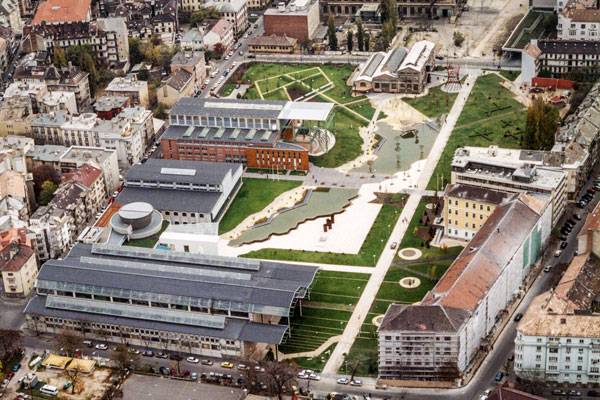 6 Months to Clean up the Site Former industrial sites also call for the rehabilitation of pollutants in the soil and groundwater. In the case of Millenary Park, one meter of soil was exchanged and the groundwater was remediated by using a drainage system that extracted polluted groundwater and recharged it. It took six months to clean Millenary Park, but once this was done, the exciting development of a green park space and a cultural center could take place. 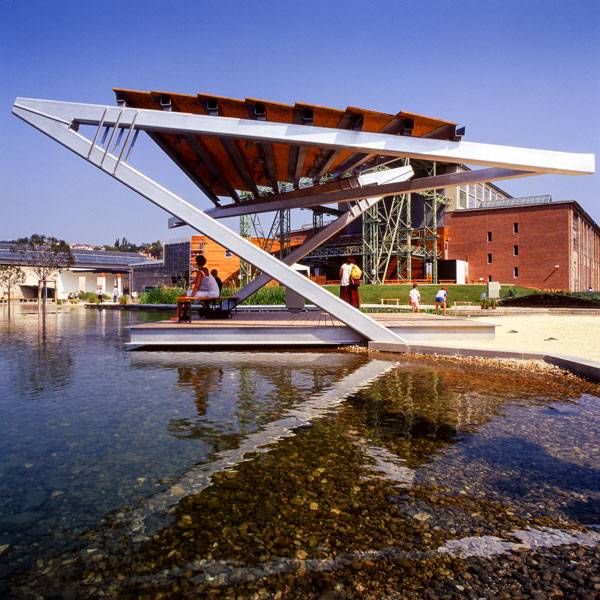 Design from Concept Újirány’s concept behind the park was the notion of “creating”. This enabled them to design a public space that would celebrate the elements of the millennium in an abstract and interactive manner while providing a much needed green park space. The park was divided into two parts: the first being an interpretive space of “motivation” and the second being an interactive space for “creation”. 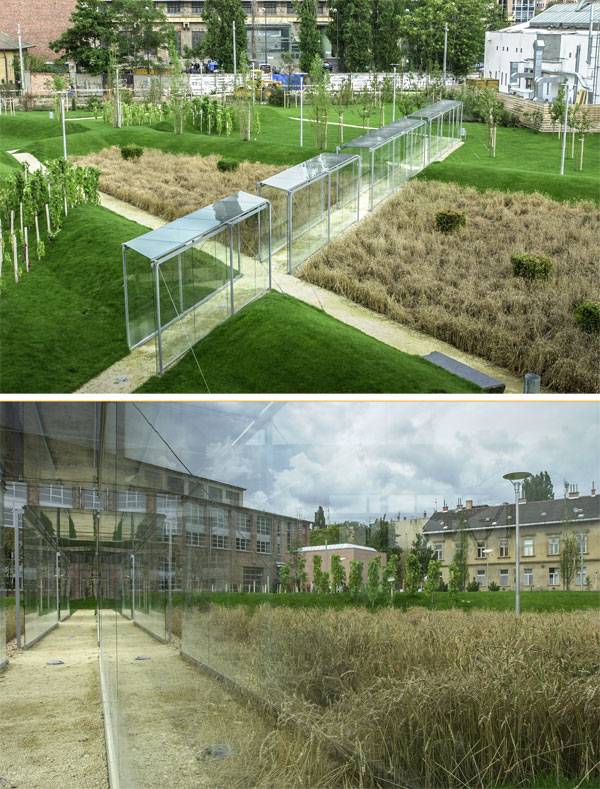 Man-made Lake Spotted with Trees In the motivational part of the park, parts of the millennium were descended into elements and reinterpreted by taking them out of their original context. In this manner, people can examine elements freely, making them aware of their own urban environment. These elements include surprising combinations such a man-made lake spotted with trees and shrubs growing through hard urban surfaces. 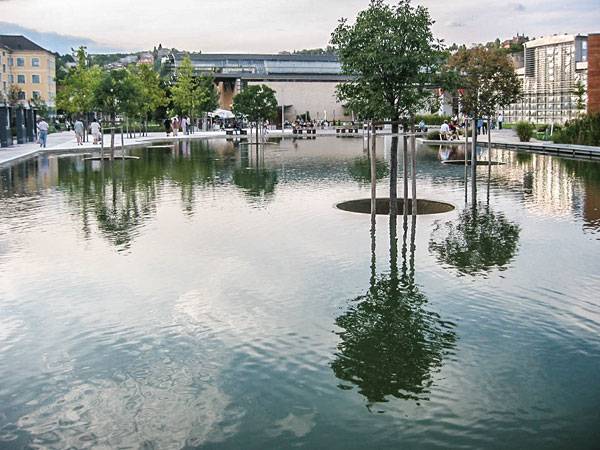 Shifting People’s Perceptions Other design interventions, such as shrubs that form “benches”, gave Újirány the opportunity to draw on the idea of creating through careful shifting of people’s perception and understanding of elements. However, the design does not prescribe a specific meaning; rather, it allows the visitor to be motivated to create his own interpretation. Proposing a New Strategy for Public Activity This idea was continued into the interactive part, where a playground of creativity was created by putting elements into mobile form in a manner that engages directly with the public. The playground extends its function by interacting with people of all ages, allowing them to engage actively with their environment. In this way, Újirány reacted in direct opposition to the passive public spaces of shopping malls in Budapest, proposing a new strategy for public activity. Instead of trying to dictate people’s activity and movement, Millenary Park aims to create a pathway for experience where people are given alternatives and options within a visual and interactive space. 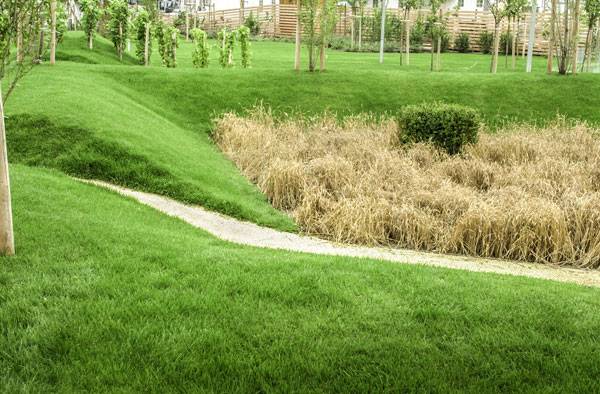 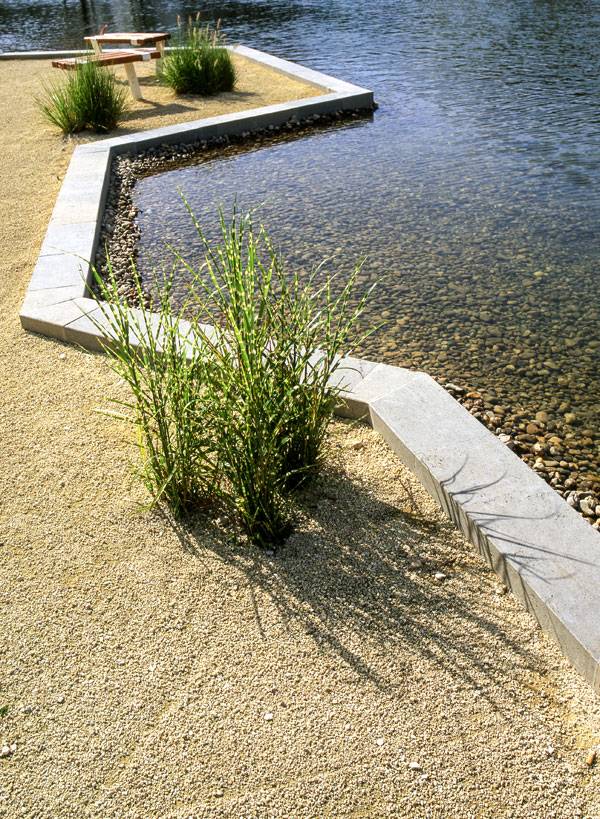 Translating Concept into Function The true genius of this project lies is the manner in which it achieves this experience while providing a functional and aesthetically pleasing public space. Újirány has also managed to design a park that consists of separate elements that organize space and give it function, yet allow for continuity that reflects the notion of design as a process. Further design success lies in the detailing of each element and material to perfectly fit its immediate context while creating links to the surrounding context both visually and physically. 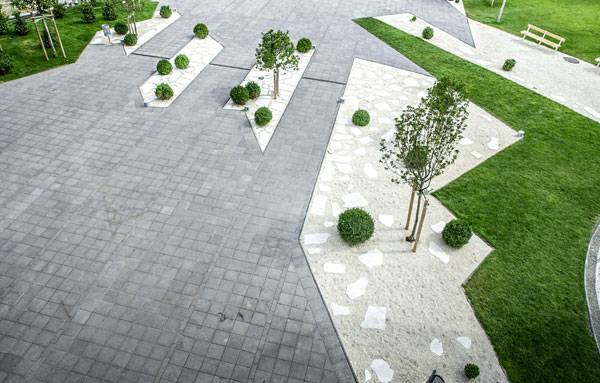 Creating an Active Public Space Millenary Park provides us with an intriguing example of how to take a former industrial site and place it firmly in contemporary public life in a manner that looks to the past, present, and future while at the same time creating a public space that is exciting in a psychological and physical way. It does not ask you to come and evaluate whether you like it or not, but rather invites you to mold your own experience and create your own park. Now that’s what we call active public space! 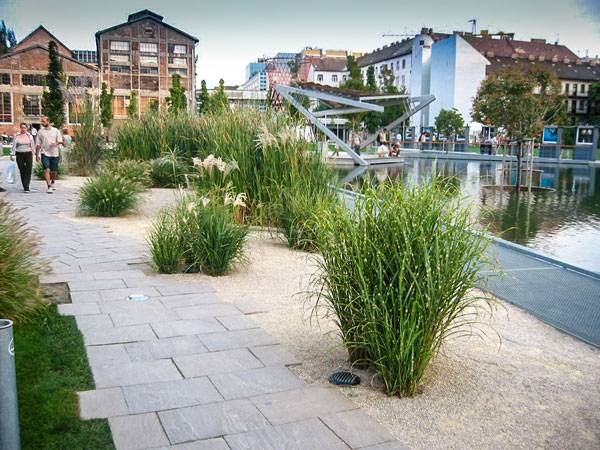