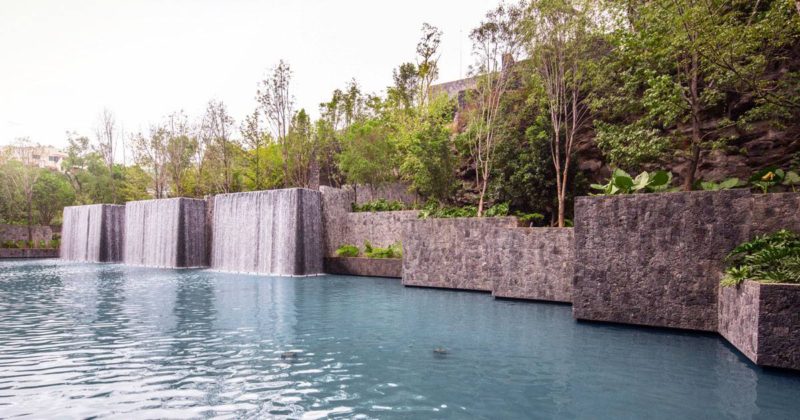 Article Mai Nguyen –  OASIS Coyoacán by DLC Architects, in Coyoacán neighborhood, Mexico City.  With the effort to increase urban green and to confront urban sprawl, the office of DIC Architects has completed the project OASIS Coyoacán in the Coyoacán neighborhood of Mexico City. Indeed, they managed to make good use of the project’s location to turn it into an exciting “park mall”. Moreover, DLC creatively applied a module design to enrich the experience of the space for the users. Last, but not least, by bringing water into their design, not only is the microclimate of the mall improved, but also people’s appreciation for nature is awakened. 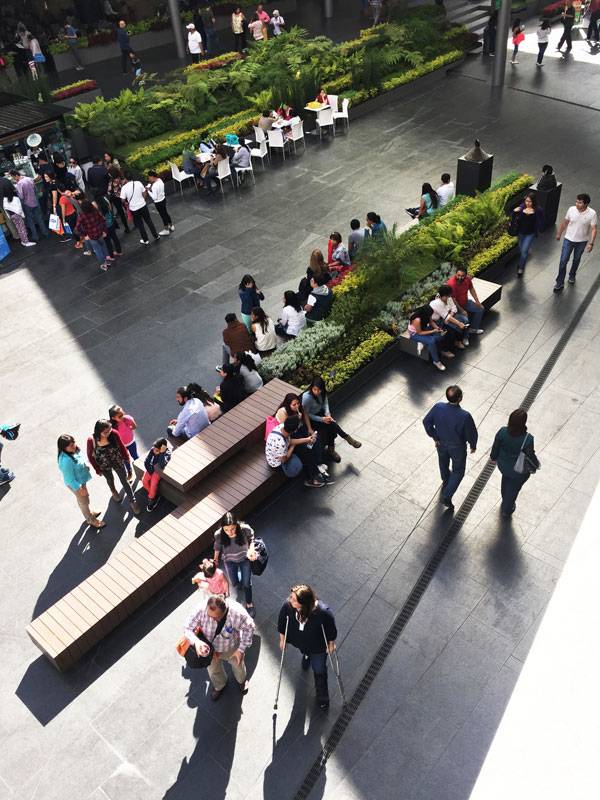 First of all, the site is close to the city’s green lung, named Viveros de Coyacan, in the north, a city park named Jardin de La Bombilla in the east, as well as other local green “spots” nearby. Secondly, the OASIS Coyoacán project site is also close to the Metro Line No. 2 and a lot of bus stations. Thirdly, the site connects to the Coyoacán neighborhood’s civic spine through the busy avenue Miguel Angel de Quevedo. 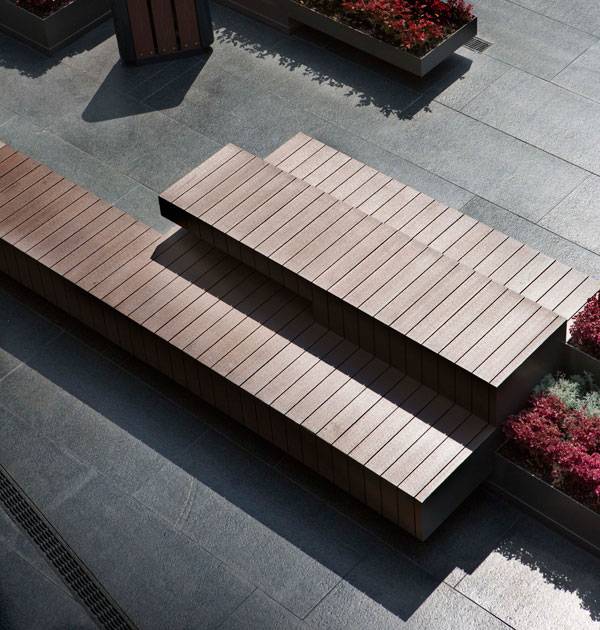 With those mentioned potential assets, DLC decided to create a public space while also encouraging shopping activities. According to DLC, the team tried to create a “park mall” that would allow people to spend the whole day in their park mall with enjoyment. Last but not least, DLC’s design also plays as a connector for the neighborhood with its greenery and public spaces. 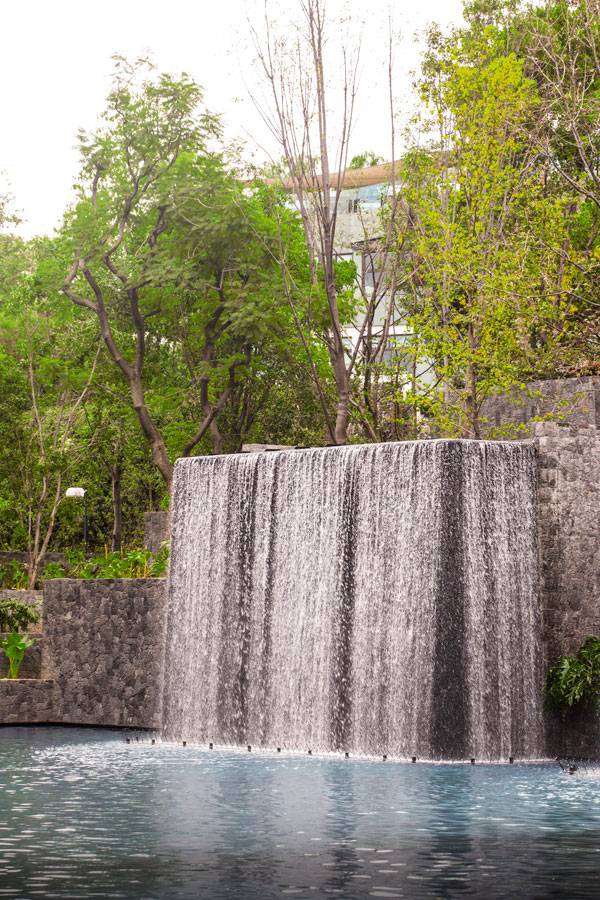 The overall concept can be summarized as the transformation of “a pixel” (different landscape elements) to create an exciting environment yet still retain the unity of the whole works. Indeed, the concept of multiplying rectangular modules is used as the main design language from general scale to detailed amenities creating a modern atmosphere for the users, from paver, to bench planter, to platform. In the paving design, DLC used the stretcher paving style (running bond) with contrasting stretcher inlay and header. The paving with looser texture is installed mainly at the walking and plaza areas; while a denser one is applied at areas which contain planter boxes or benches to highlight those areas. 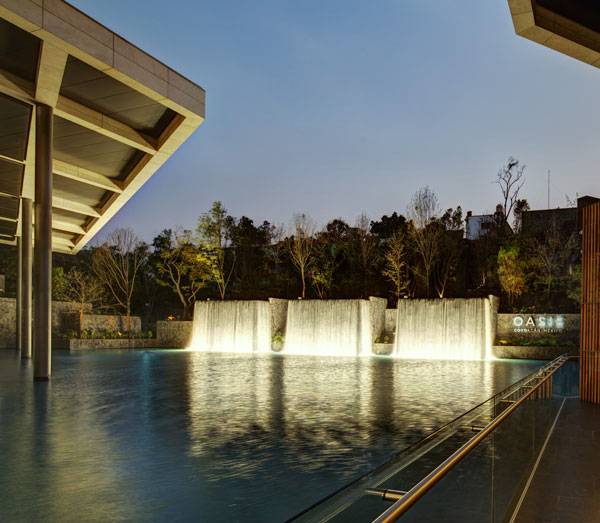 For public amenities, DLC installed modular green islands and dark brown benches in the middle of the pedestrian track as well as around the main exterior places. The plants are arranged carefully so that their colour’s pattern would also follow the main design concept. The benches are formed with a framed base and steel supports with composite wood on the top and the side. Moreover, DLC also changed the levels of benches and the heights of the planter boxes, creating a “3-dimensional” effect with a greener and fresher feeling. 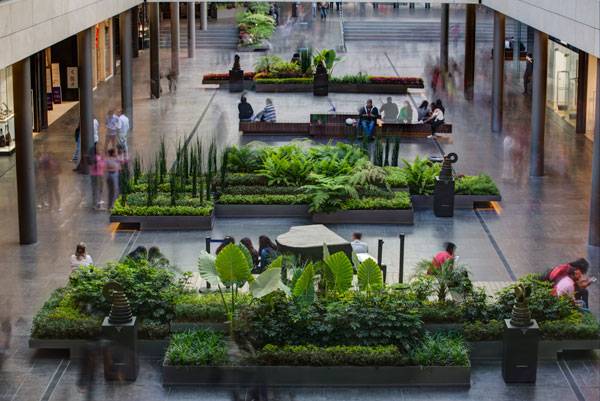 Bringing Nature into the Shopping Mall

One mission of landscape designers is connecting people with nature and improving their awareness of the natural environment. To fulfil this mission in the OASIS Coyoacán project, DLC decided to imitate a waterfall by creating a small waterfall area at the end of the pedestrian track. DLC used different plant types in the background, establishing a green screen for the waterfall replica at the turn from pedestrian track heading into the main plaza. Further than that, DLC also designed a water feature for the whole OASIS Coyoacán project from the main entrance into the heart of the mall. 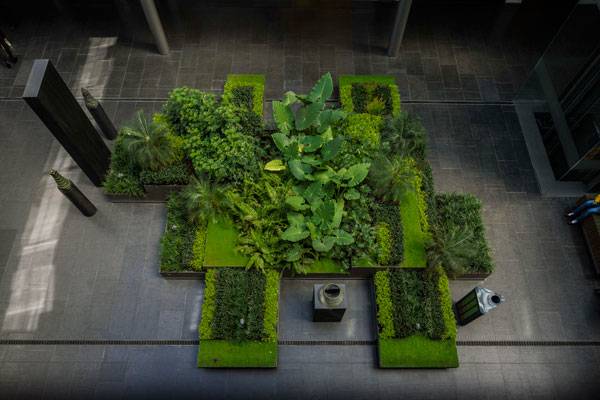 Particularly, the fountain in the heart of the mall, at the basement, established an exciting atmosphere by using strong water columns that would reach up to the ground floor. In fact, this design feature also eliminated the feeling of being underground and created a connection with the waterfall monument. Apart from that, DLC used numerous planting species to enrich the experiences for the user. Indeed, there are about 17 types spreading through the whole mall. Most of them have a slim trunk with decent canopy and average height; this selection created a thicker and more layered view for the planting areas. In fact, with a harmonious integration of water feature and plants, the design is like installing a miniature rain forest into the shopping mall. 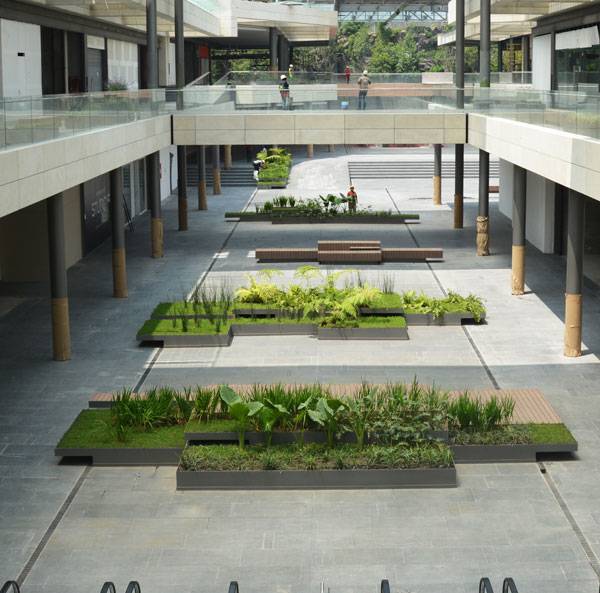 Experience the Landscape in Time

If visiting OASIS during the daytime created a feeling of wandering inside a rain forest, visiting OASIS after the sunset would make you feel like getting lost in a fairy land. It is all thanks to the interesting combination of lighting to highlight outstanding design elements in the design. First of all, although the place functions as a shopping mall, DLC still managed to maintain the connection with natural light by using a glass ceiling integrating with aluminum sheet. As a result, the mall managed to have enough shade for the users yet be full of natural light. 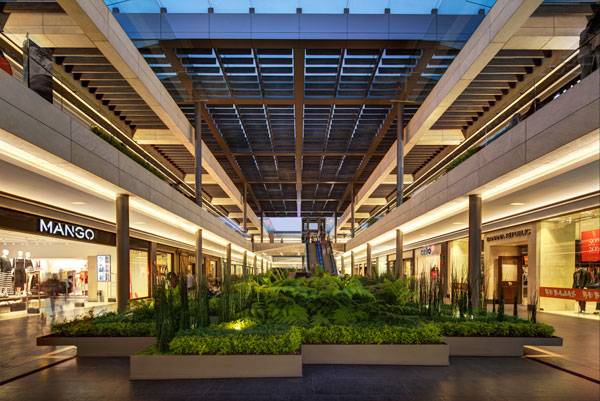 In term of artificial lighting, DLC used mainly warm light to establish a friendly shopping atmosphere and to highlight the outstanding elements of their works; particularly the lighting design for benches and the waterfall. By having the LEDs at the foot of the benches, together with their unique design, the benches at night would look light floating on a yellowish and sparkling river. Meanwhile, white light is used at the waterfall monument to enhance the image of the force of nature. In short, DLC’s design for OASIS Coyoacán has proven to be a stunning project that has tremendous positive impact not only in small scale but also in the neighborhood scale. In fact, its Silver Medal at Bianal de Arquitectura de la Ciudad de Mexico 2016 is a solid proof for the success of DLC’s design in the Coyoacán neighborhood. 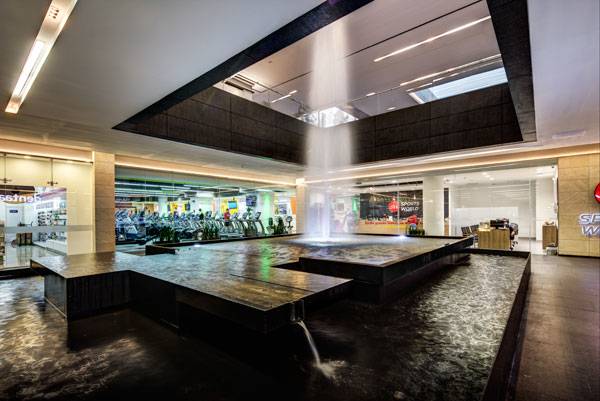