In the period of the ’80 the urban structure of the neighborhood has been restructured. The result is more space, more sunlight in the streets and wider sidewalks, but also more gray stones. After thirty years the residents of the Bloemkwekersstreet took action to improve their street with the initiative and construction of gardens, named Frontgardens XXL. The result is impressive.
It started with a dirty chat between two neighbors who know each other from The Tussentuin in Rotterdam. One neighbor had just tidying up the sidewalk, because there was human excrementon on it. He was thinking of a solution and wanted to plant bushes with thorns. The other, a professional landscape architect and garden designer, had another idea: a garden along the entire length of the wide sidewalk in their street. Bushes with thorns are fine, but beauty is what people really need. He already made a plan, inspired by the atmospheric of another street in this city. So the initiative for making Frontgardens was born. One neighbor writes a story and asks the other neighbors to support and get signatures. Also two collages of the street in the ‘future’ where made. These collages helped by dissolve all existing doubts of whether it could be something with the street. The residents send their proposal to the local government to get a financial support. They responded positive and even the people of the Department of Urban Development had tears in the eyes by reading this proposal. There was goodwill and there was money.
The design of the gardens was made and the Public Department of the city constructed the framework of the gardens and the fences. The devices of the gardens would be done by the residents themselves. On the first Saturday, all hedges where planted and two gardens where devised, with a lot of attention from neighbors and food passengers. On the second Saturday, the other gardens where decorated. Two elderly neighbors didn’t want a garden with plants, but a tiled garden. With the help of other neighbors one tiled garden transformed in a garden with plants in pots. They started with tree big pots and a week later there where six. This was an inspiration for the other tiled garden
On the third Saturday some finishing touches had to be made. Nature had to take over and time was necessary to let the plants get grown. Residents and the local government where surprised to see the results and the metamorphosis of their street. However, some people where critical about it and said; “How beautiful, but……..will the people continuing to maintain their gardens? And will ‘they’ (the youth) not ruining it?” Time will prove, but the first experience is that of admiration and respect for the gardens. Residents are taking care of their own gardens and there is a sense of responsibility for the street. For the first time in thirty years there are daily chats between people how are working in the gardens and people how are walking on the side walk. 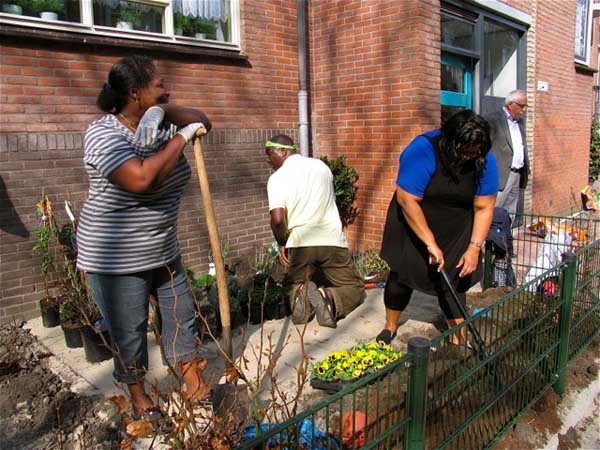