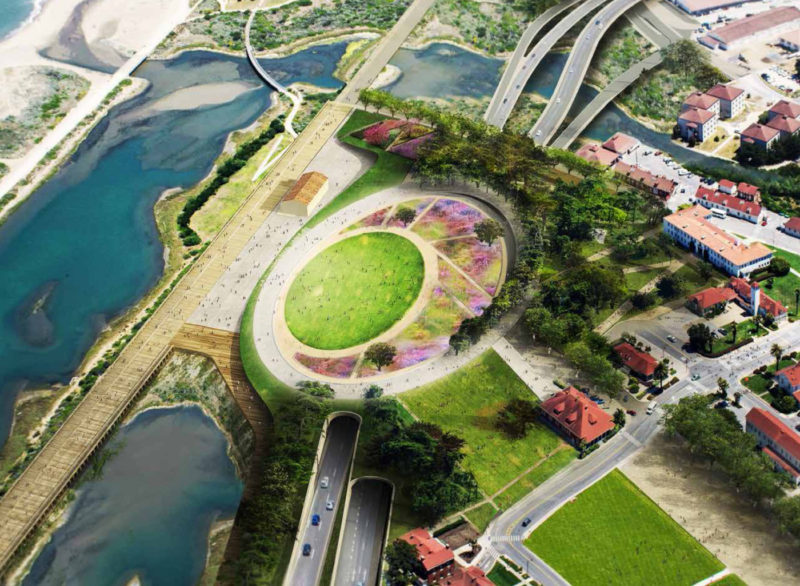 The Presidio—the 1,500 acre national park which vanguards the Golden Gate Bridge in San Francisco—is looking to make some dramatic changes.  The park is gaining a large tract of functional land as the elevated Doyle Drive which transmits people to the Golden Gate Bridge is being lowered to a series of at-grade parkways and underground tunnels, not unlike the Big Dig in Boston.  In its place will be an iconic new landscape that serves as a social and cultural hub for the city.

The Presidio is an important piece of land to San Francisco, historically, culturally, and ecologically.  It served as a major military post for over two hundred years before becoming a national park and hosts a number of important coastal habitats.  Last February, the Presidio Trust shocked the public by announcing that they were not going to proceed with any of the proposals under consideration for cultural centers on an 8-acre site in Mid-Crissy Field.  The creation of new land from the alterations to Doyle Drive had prompted the Presidio Trust to seek a bolder vision for the future of the national park.

In March, the Trust approached five high profile teams to create concepts for a new 13-acre site between Crissy Field and Presidio’s Main Post.  The teams were tasked with three missions: to create a vision for the newly available landscape, develop a new visitor center, and reimagine the Crissy Field Center Youth Campus.  According to the Presidio Trust, the new site is to be a “space that integrates the waterfront with the Presidio’s historic core via a new landscape from which visitors can experience the Presidio, access the shoreline, and view the iconic Golden Gate Bridge.”  The five concepts by CMG Landscape Architecture, James Corner Field Operations, OLIN, Snøhetta, and West8 were released in September and are now available for public feedback.  All five of the concepts celebrate the incredible vistas that the site offers to the Golden Gate Bridge, Alcatraz, Angel Island, and the sweeping hills on the other side of the bay.

CMG’s proposal offered a series of whimsical elements like a cyanascope, a floating playground, and a kinetic fence that were framed in a landscape formed with integrated rail, bike, and pedestrian connections; creative transitions; and a program engaged in teaching and improving a number of different native ecologies. 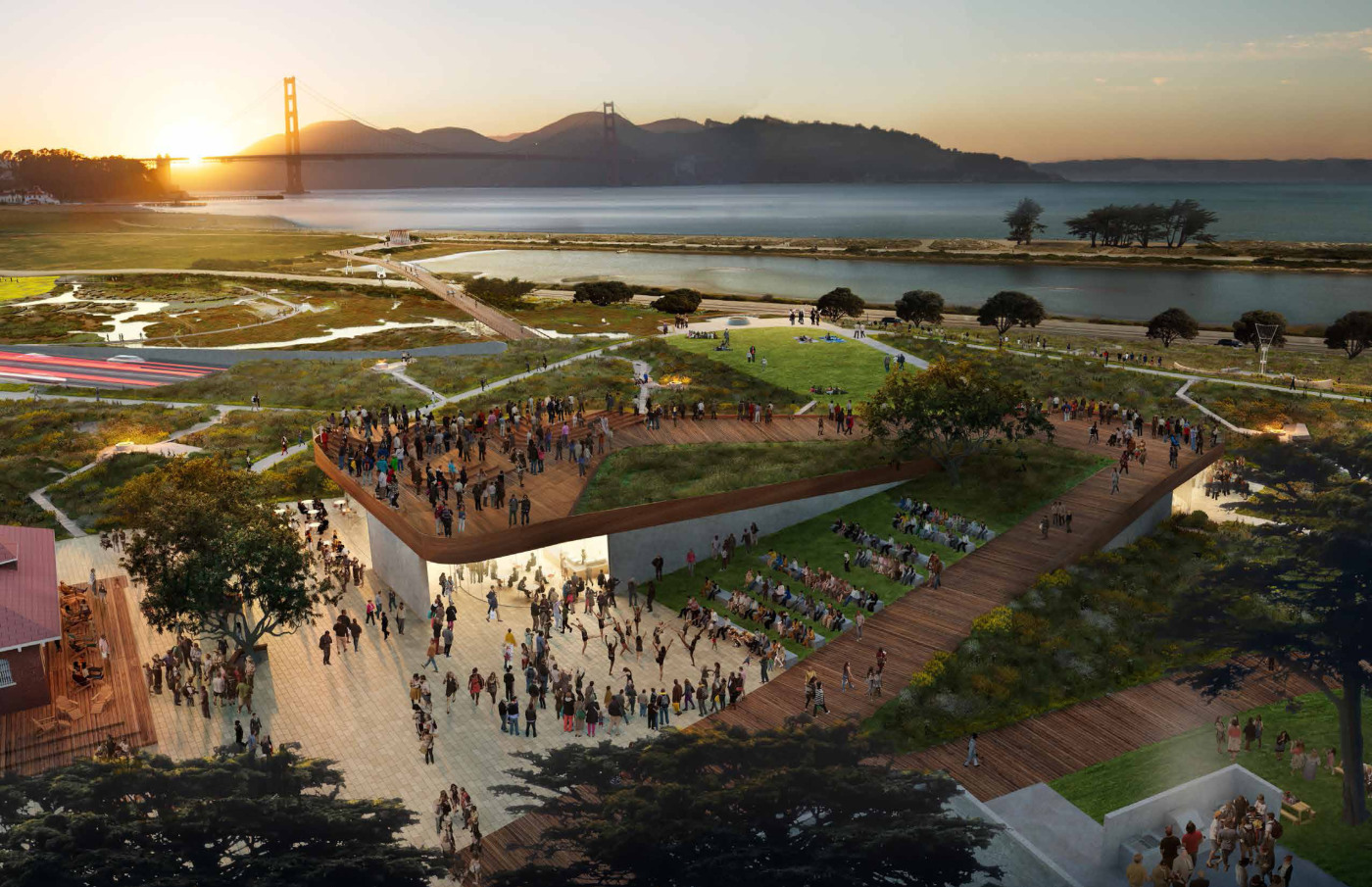 CMG’s central gathering space and amphitheater morphs out of the ground to create sweeping views of the Bay. Image credit: CMG Landscape Architecture.

The proposal from James Corner plays on the romantic notion of observation points that is prominent throughout San Francisco. Between the Main Post and Crissy Field Marsh, the main programmatic landscape was molded into several dramatic overlooks facing the key iconic viewsheds.  These overlooks are unified by lawns and staged seating, providing a program that encourages high levels of activity throughout the day and year.

OLIN’s concept taps into to the site’s genius loci through geometries that reflect the natural and manmade features found in and beyond the Presidio. The proposal contains three zones, each with a distinct with relationship to the horizon and landscape. Along with the physical site, OLIN also proposed an app that would allow park users to learn more about the history, ecology, and upcoming events. 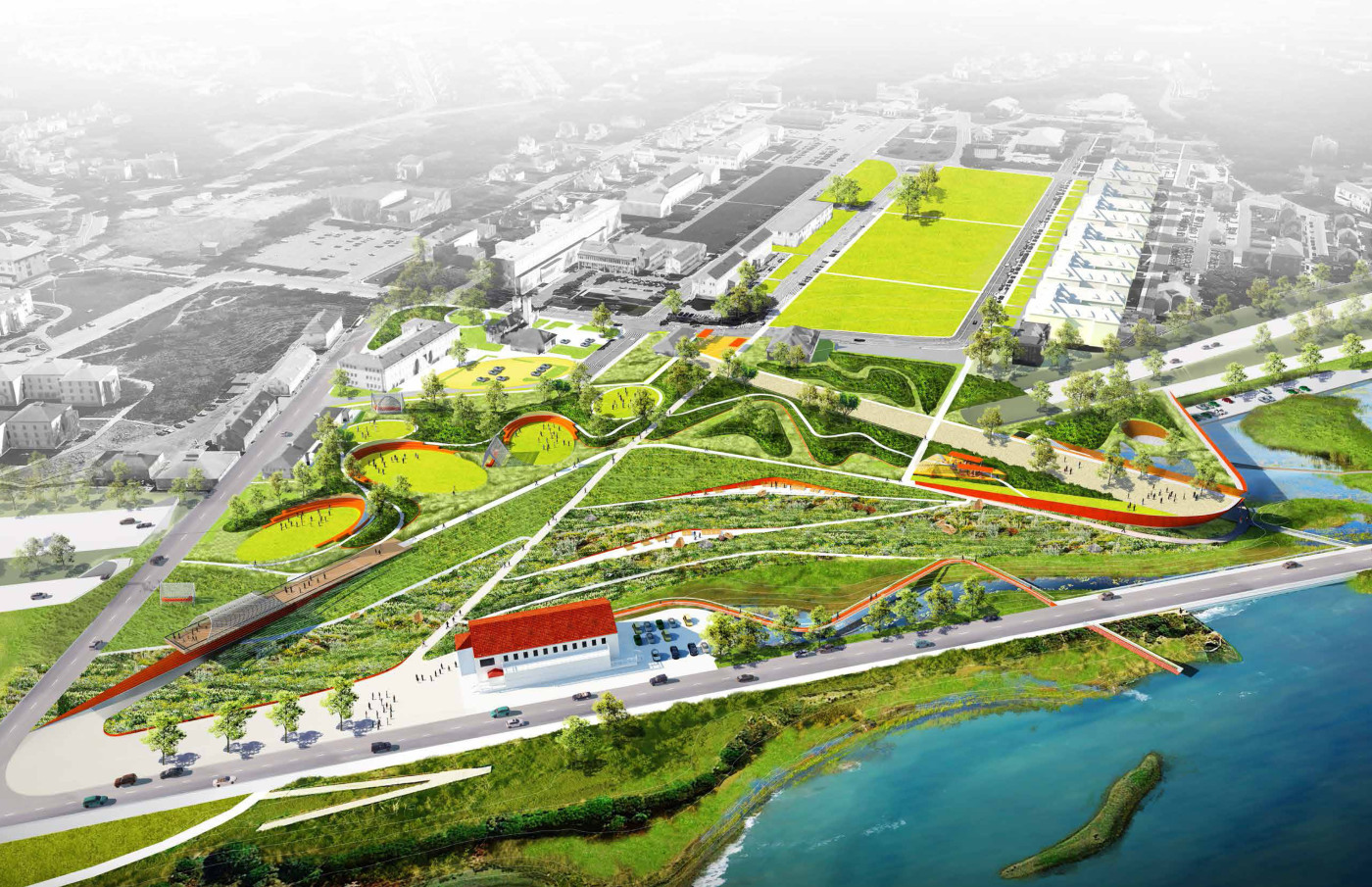 OLIN’s plan for the site includes formal elements including elliptical lawns and and overlooks inland and transitions into informal geometry as the site moves coastward.  Image credit: OLIN.

Snøhetta’s proposal similarly extrapolates forms from the local natural and artificial landscape into two major forms: arcs and strands.  The programming is highly cultural- and social- based in order to preserve the cultural landscape of the park as a military base and the city as a whole.  It makes a point of commanding views both up and down.

In the proposal from West8, the park’s programming is focused on – but not limited to – a single hub, the Eclipse Lawn.  Here is where all the park visitors come to find the best views, enjoy the events, and get a bite to eat.  In front and behind run pedestrian and bike thoroughfares that extend throughout San Francisco.  Also spreading out from the central hub are paths that wind through different habitats to the other elements on site. 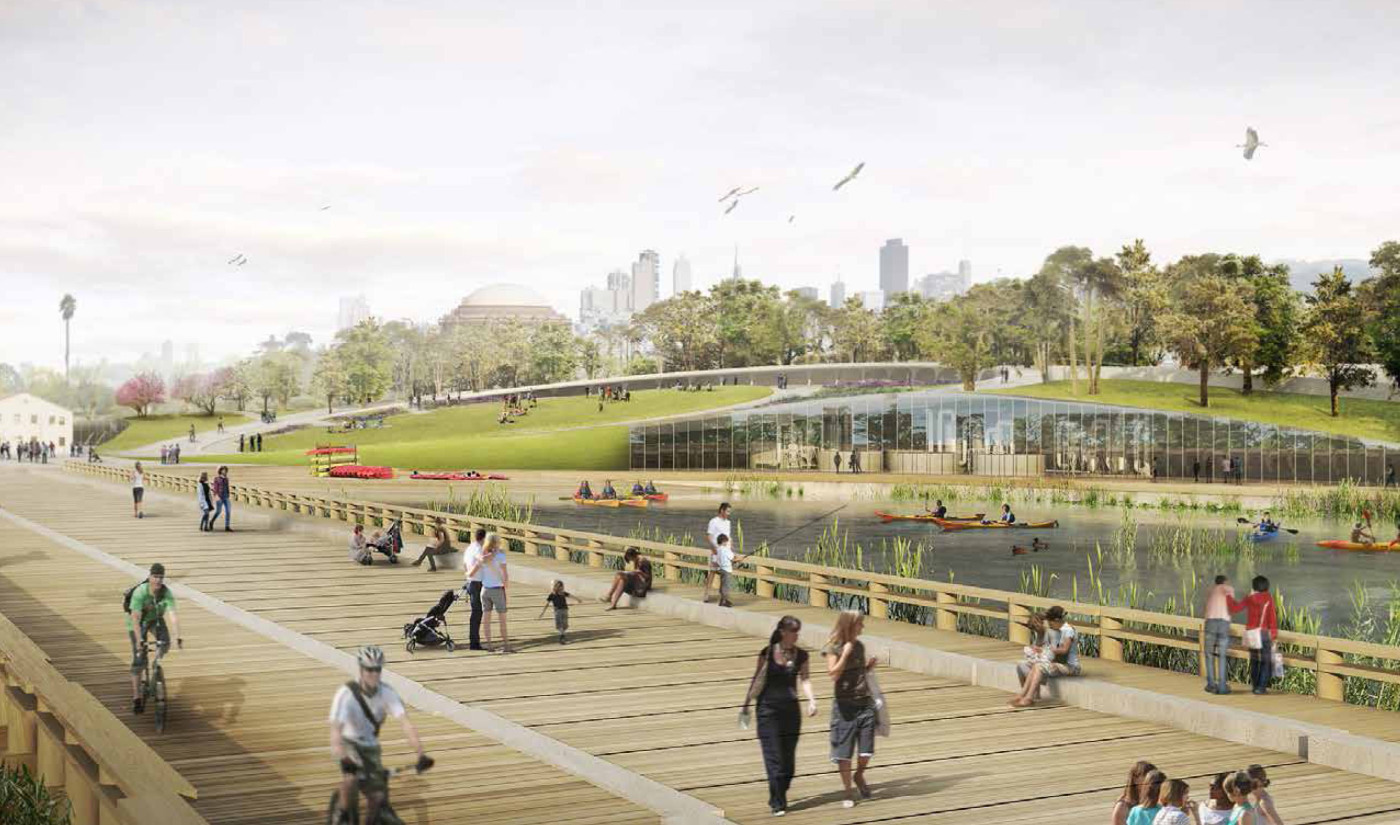 This image shows the main coastal thoroughfare and the subterranean visitor’s center west of the Eclipse. Image credit: West8.

The proposals are open for comment until 2015, at which point the Presidio Trust will choose one or more teams to pursue the final design based on public feedback. The project will alter the city’s image and influence the fabric of San Francisco well beyond the Presidio’s borders.  It has the ability to establish a precedent for melding highly active urban systems into ecologically-functioning landscape.  For now, we can only hope, comment, and wait to see what this landscape becomes.