This week’s Sketchy Saturday top 10. Welcome to this week’s edition of Sketchy Saturday, where we had our tightest week ever in terms of competition, picking which sketch should obtain top spot was no easy feat. While the talent we get is always of a high calibre, the top three are usually in a league of their own and the winner is often a clear favourite, this week, we’re happy with first place but in a different week several others listed could of been featured in that number one position. Decide for yourself, which one would you of put in the top spot. 10. Marcin Wodniczak, landscape architekt from Poland, owner in www.addgreen.pl 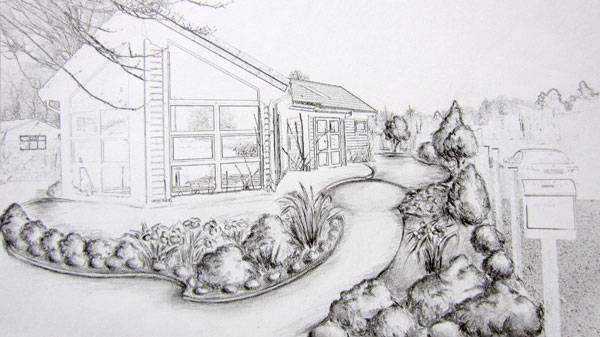 “I made this sketch as part of a design, to make sure a prospective client hires me as a contractor to make their garden around his summer house in Denmark. It is made by hand and pencil, using a real photo as the basis. It is located in Vejle Fiord, Danmark”. 9. Isa Eren AKBIYIK – Landscape Architect – Nota Design Landscape Architecture Office Owner – Antalya/Turkey 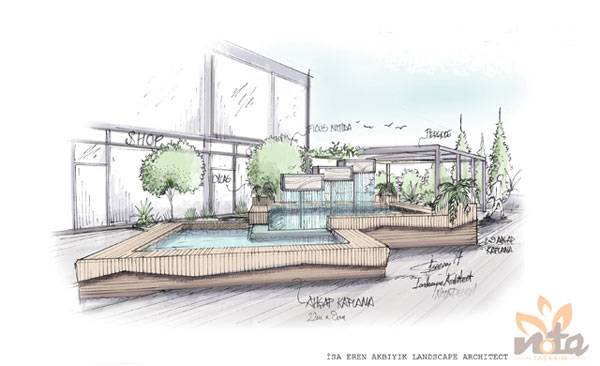 “This is a concept sketch for the NovaPark Shopping Center in Antalya, Turkey. It represents the Ornamental Pool for the garden. I made the sketch into a 2 point perspective with 0.3 – 0.5 drawing pen on A3 paper”. 8. by Gonzalo Cid, agricultural engineer with a post degree in Landscape Planning and Environment, Buenos Aires, Argentina

“I drew this scene of the Mendoza`s Central Park last July, during my holidays in Mendoza, Argentina. This park was built on the old and abandoned railroad depot. I used to live near this land when I was a child and I played with my friends for several years! It`s a nice park (although I`m not in agreement with the design) and it was a big change for the zone. The drawing was made on location in about 2 hours. Materials: Pencil, ink and watercolor on a notebook (made by a very good friend, by the way), Canson sheets 300 grs (21x15cm) on a landscape format (42x15cm)”. 6. by Mario Rotersos, Italy 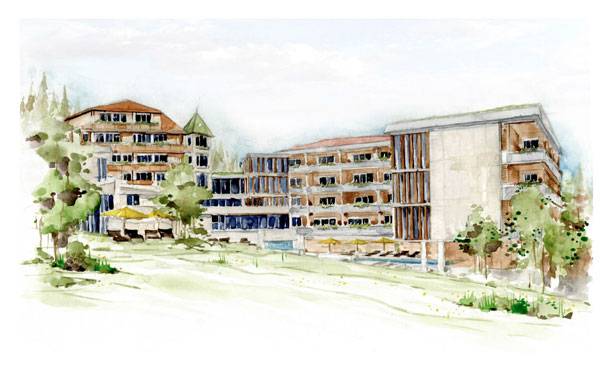 “I do a lot of freehand sketches or 3d rendering then I colour them with Aquarelle or Copic colouring pens and scan the drawings and finally touch them up with photoshop. It’s a mix medium style. The drawing is of a wellness and spa hotel in south Tyrol, Italy done in Aquarelle / watercolours.” 4. by  Amela Djurakovac, Landscape architect from Serbia 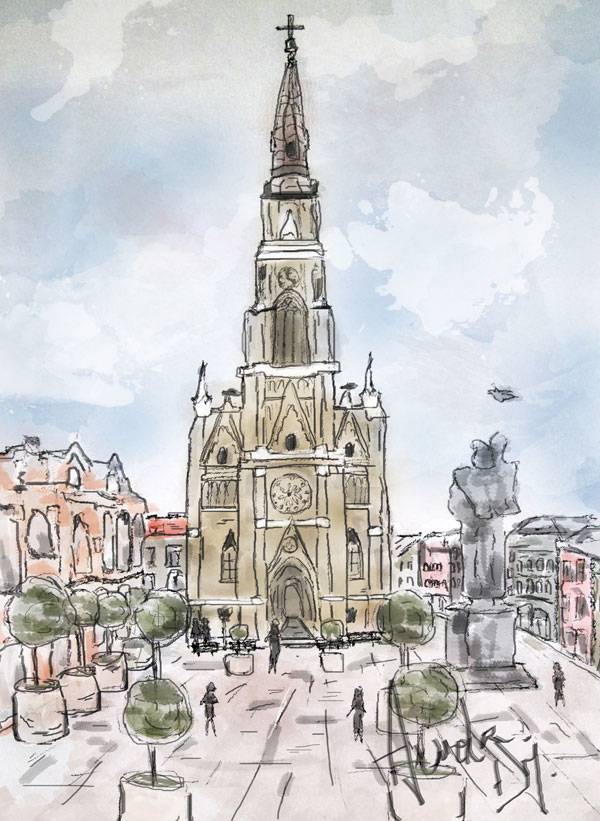 “The drawing has been made while I was spending my time in my lovely city and it’s one of my urban sketches. The sketch shows the center of Novi Sad, and one of the famous sights of the city-The Catholic Church “Name of Mary“,known as “ The Cathedral“. I made it with pencil and than painted it with watercolors”. 3. by Kr Pueblos, 4th year – Landscape Architecture Student, University of the Philippines – Diliman 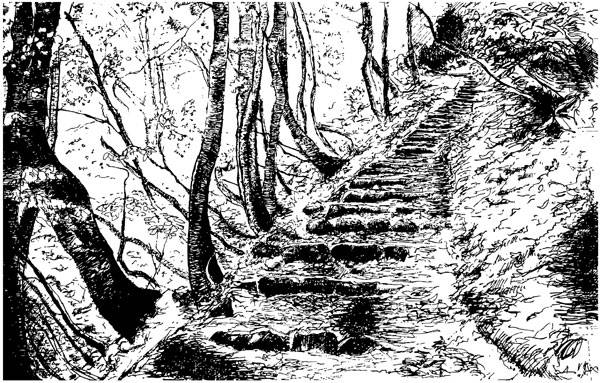 “This was a sketch back in my first year of study; we were asked to sketch a landscape that exhibits a relationship between hardscapes and softscapes. I chose a rustic setting wherein the stone steps blend seamlessly with the natural elements surrounding it. The sketch is done freehand through pen and ink on paper.” 4. by Seangtham Nisapa ,nisp design, Thailand “I made this sketch when I worked in China. This sketch is a part of design proposal for the large scale residential project named “Longgang Maple City Shenzhen” . I drew this sketch by using black ink pen with a variety of stroke techniques”. 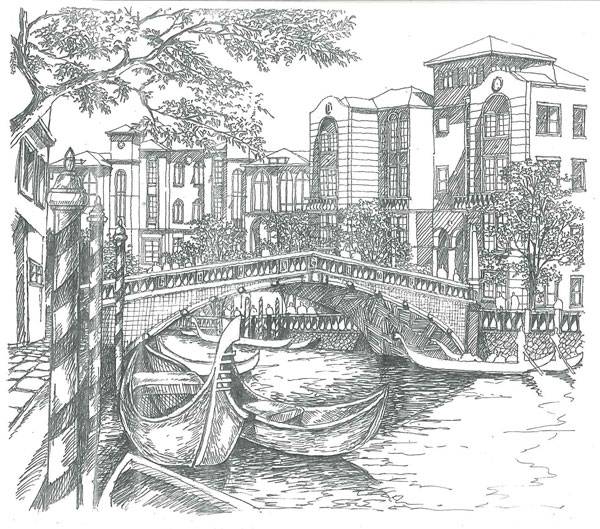 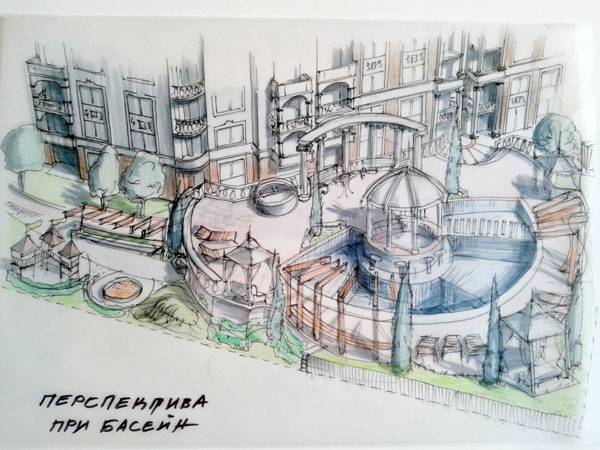 “The reason for making the sketch comes from the workflow that is most suitable in such situations when the client has to first see the general idea and accept it because there is nothing more fast and expressive than the good old hand sketch. It is fast and it has its own charm. I first used a scale of 1/250 on tracing paper (vellum) and I sketched with more soft and big size pencils to make  the general idea then go for 1/100 and sketch by using ink and pencils and some markers for shadows. In the case of perspectives there is no precise  scale and I use ink pencils or markers with a small pint 0.5-1 and some colored pencils for the colors”. 2. by Archit Singh, student of architecture in the Department of Architecture  at the National Institute of Technology, Hamirpur, Himachal Pradesh, India 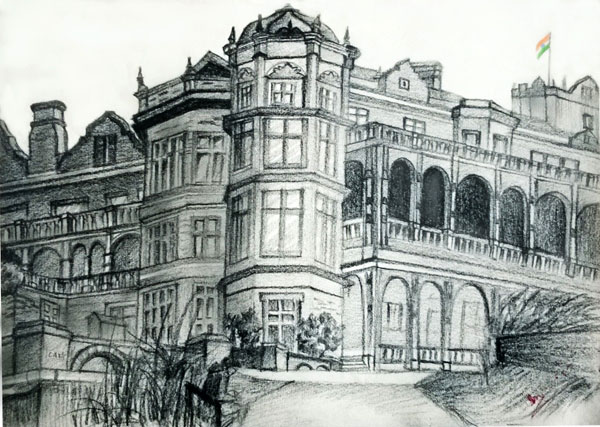 “Indian Institute of advanced studies formerly known as the Rashtrapati Niwas(President’s House) is one of the finest example of Scottish Architecture in India. I was on my annual architectural study tour to Shimla organised by my college, when its beauty, grandness and its amazing architecture style inspired me to make a sketch at that moment even though the temperature was near about 0 degrees at that time. Style: Realism. Location: Shimla, Himachal Pradesh, India. Material: Charcoal on Paper”. 1. by Maganjot Kaur, Architecture student, India 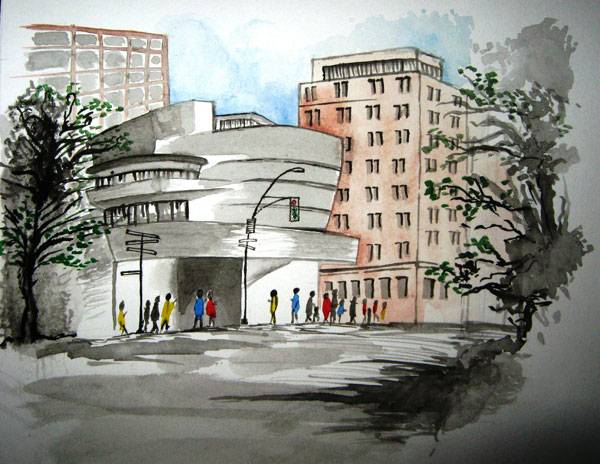 “This depiction of Solomon R. Guggenheim Museum by Frank Lloyd Wright was attempted as a part of museum design project using water colours on ivory sheet. After completing this sketch, I rediscovered my love for drawing. After all, sketching is an Architect’s language through which he communicates”. – That’s this week’s Sketchy Saturday  top 10, congratulations to all of you who featured, it really is a challenging task, with so much awesome talent out there. Check out the Sketchy Saturday official Facebook album and see literally 1,000′s of incredible sketches! Follow all the winning entries on our dedicated Sketchy Saturday Pinterest page. If you want to take part send your entries into us at office@landarchs.com Recommended reading: Sketching from the Imagination: An Insight into Creative Drawing by 3DTotal Article written by Scott D. Renwick Return to Homepage
Published in Blog