Walking amid the skyscrapers and crowded sidewalks it is easy to forget that New York City is an aggregation of islands and peninsulas.  But a free ferry ride to Governors Island can be a pleasant reminder of the joys to be found in the harbor of this great city.  (Above: The view towards New Jersey from Governors Island)

On June 11, I participated in a members-only hard hat tour of the construction that is currently underway on Governors Island.  The Van Alen Institute, “an independent nonprofit architectural organization that promotes inquiry into the processes that shape the design of the public realm”, organized the tour in partnership with the Trust for Governors Island.  Coincidentally, the tour happened on the same day that Mayor Michael Bloomberg released his new plan to protect New York City from the threat of rising sea levels and storm surges and FEMA released the updated 100-year flood maps, both of which are very relevant to Governors Island.  The Trust recorded 13 feet of flooding on Governors Island as a result of Hurricane Sandy.

West 8, a landscape architectural firm whose main office is in Rotterdam, in the Netherlands, is the lead design firm for the project currently being implemented.  In 2007, West 8 was one of the five teams that were invited to participate in the design competition for Governors Island and it was their proposal that won the commission to design the new park.  The team also included Rogers Marvel Architects, Diller Scofido + Renfro, Quennell Rothschild, and SMWM.  Fortunately, the Dutch designers have the sensibility of designing with respect to the relationship between the land and water. 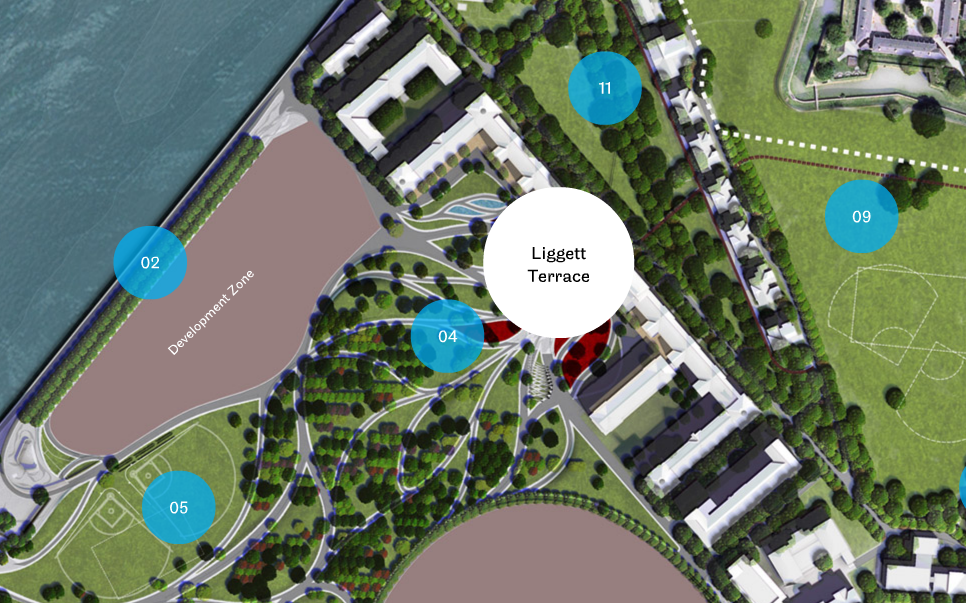 The areas that are currently under construction are:

Future phases will include the South Prow, Liberty Terrace, the Hills and the Great Promenade. These areas are pending future funding.  More information about each area can be seen at the Governors Island website.

Like other parts of New York City, Governors Island was expanded using landfill, which is where the new project is being built.  The island roughly doubled in size when the City used excavated fill from the Lexington Avenue subway line in 1911 to extend the southern end.  Atop the original fill, the new mounds for the Liggett Terrace and the Hammock Grove were created with 180,000 cubic yards of gravel and debris from the demolition of vacant buildings on the island.  There will be an additional 80,000 cubic yards of engineered soils layered on top of the fill to create the base for planting trees, shrubs, and flowers.  West 8 was careful to specify trees with the changing climate in mind.  For example, there will not be any plants which grow in the New York City region at their southernmost Hardiness Zone, considering that cooler climate plants will only survive farther north as the region continues to warm for the next century. 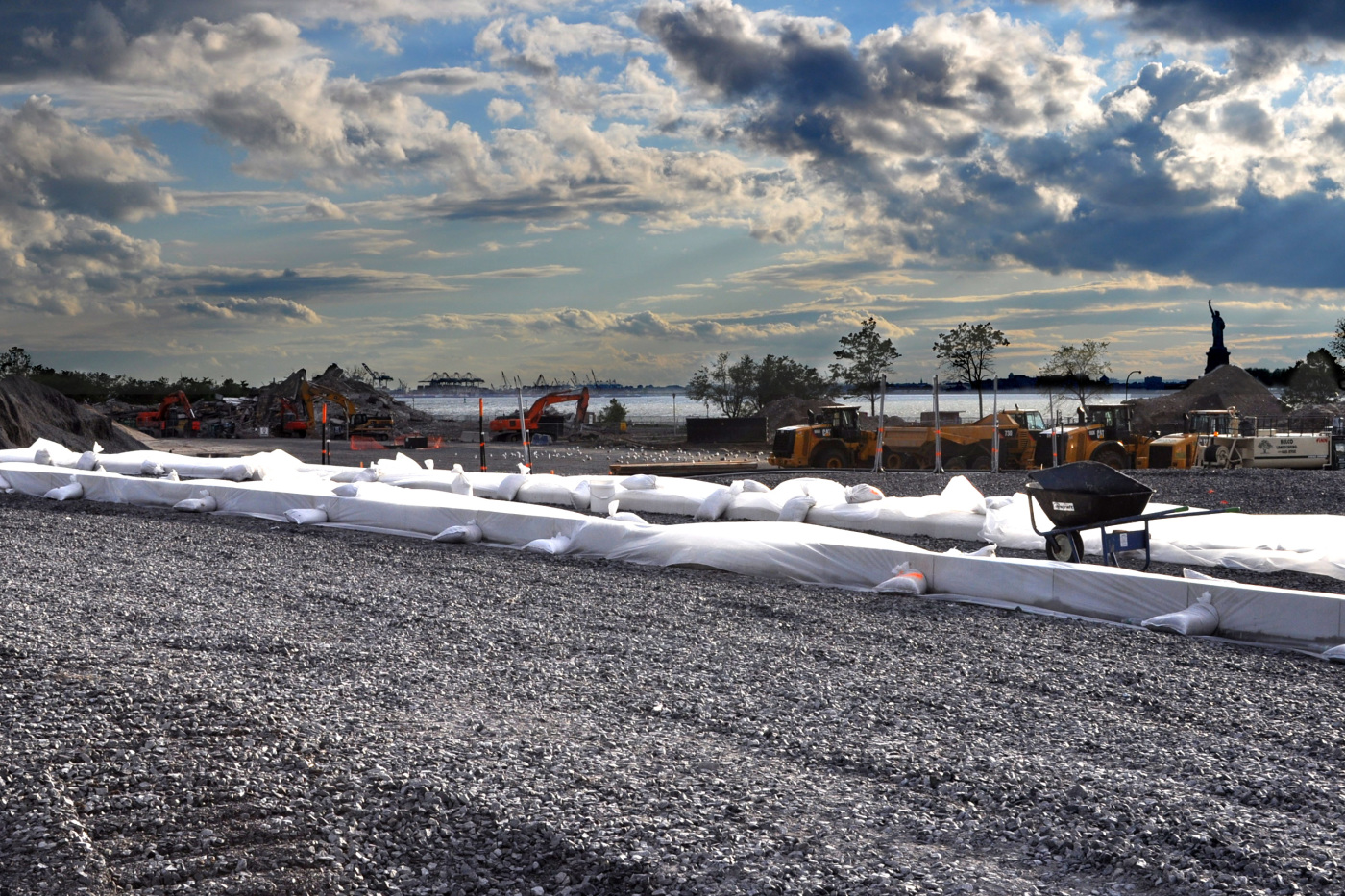 Standing atop the highest mound that has been constructed so far it is clear that this will be one of the best panoramic vantage points of the New York City harbor.  The Statue of Liberty appears much larger than she normally does from farther points in the city (which doesn’t fully register in photographs) and you can see the skylines of Manhattan, Brooklyn, Staten Island, and New Jersey.  The gulls circling overhead are a constant presence on the island and they accentuate the romance of this unique experience. 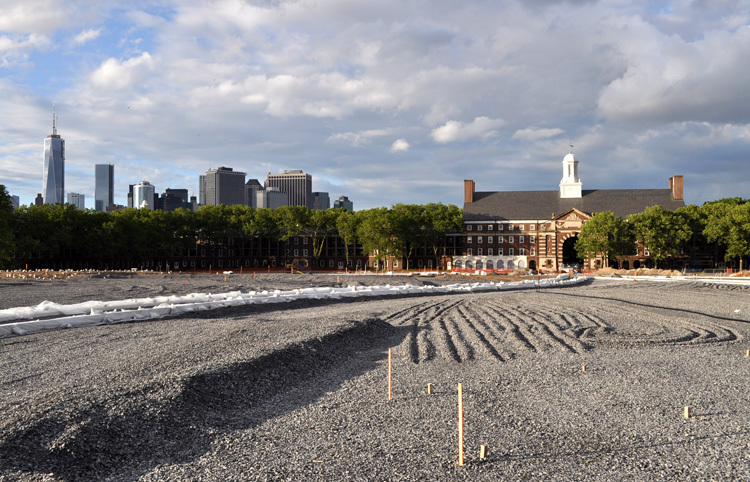 As a graduate student in the Landscape Architecture department at the Ohio State University I was fortunate to take a seminar this spring featuring Adriaan Geuze and the work of West 8.  During one of our seminar meetings Adriaan explained that by designing with the canvas of white you could begin to see the geometries in the organic shapes of the earth and plant materials.  He also explained that it is his intention to use white in order to exaggerate the colors of the grasses, which will be planted behind the white retaining walls. 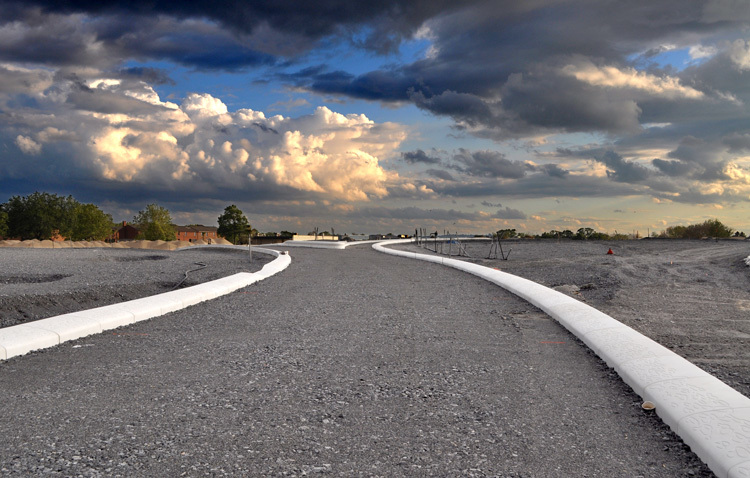 During my visit to Governors Island I could see that the curvilinear retaining walls, which double as benches, also have the effect of highlighting the gentle topography of the mounds.  The continuous line reminds me of the Christo and Jeanne-Claude’s Running Fence project, an art installation that uses a similar approach to the landscape.  It is a simple gesture that helps focus your eye on the surrounding context and it reveals the subtleties of the terrain.  West 8 has added a new poetry to the visitors’ experience of the landscape on Governors Island, which is complimentary to the magnificent views of the surrounding harbor and skylines. 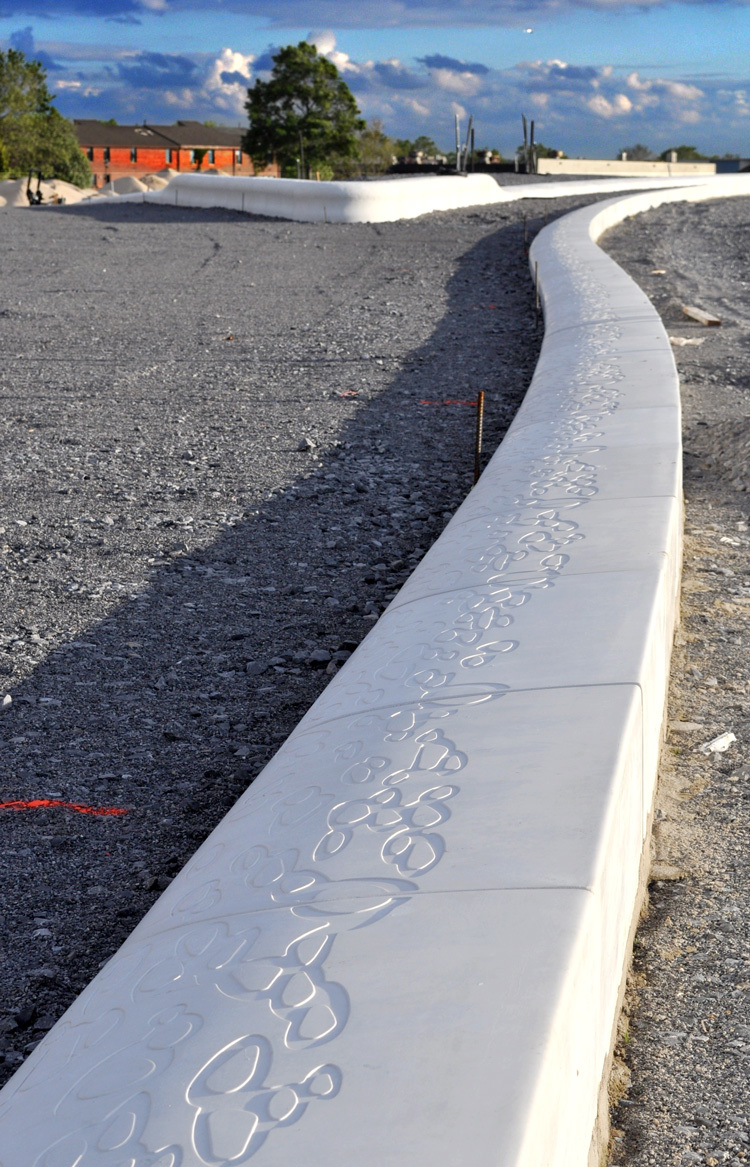 The entire south portion of the island is closed this summer because of the installation of coastal revetment to help protect the island, reconstruction of the seawall and construction on the interior portions of the park.  The 30 acres of new public park space will be completed in Fall 2013, but that will be after Governors Island has been closed for the season.  The Island and all of the new park space will open to the public for the summer season on Memorial Day weekend 2014, but for me that date can’t come soon enough.

The Trust for Governors Island is leading more hard hat tours of the construction on weekends throughout the summer. The site is also open every Saturday and Sunday through Labor Day (September 29). Information can be found at their website: http://www.govisland.com

All photographs by author.   Masterplan image via govislandpark.com/areas