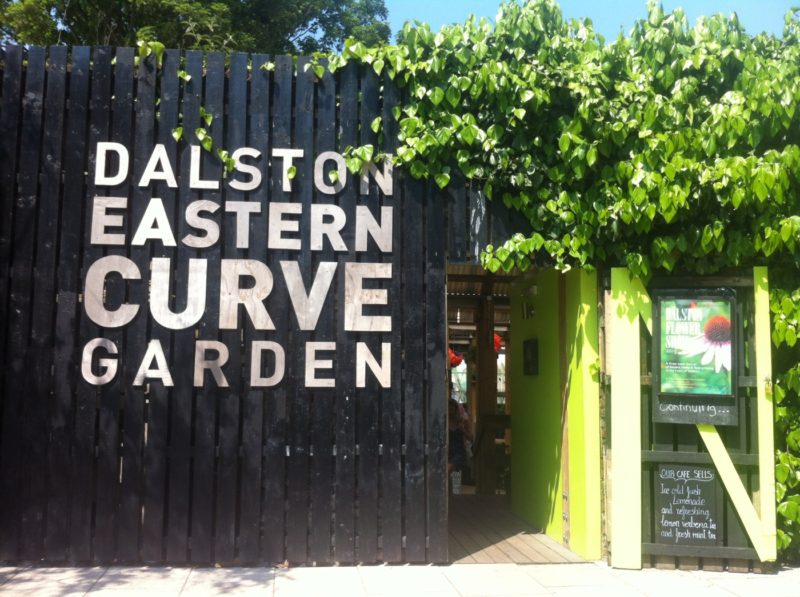 Every day for the last six months I’ve hurried past a tall facade of blackened-timber on my way to work. I’d noticed a small, brightly coloured opening in the black hoarding, partially hidden by clambering plants but until last week I’d never ventured through it. What awaited me on the other side was an unexpected pocket of tranquility. 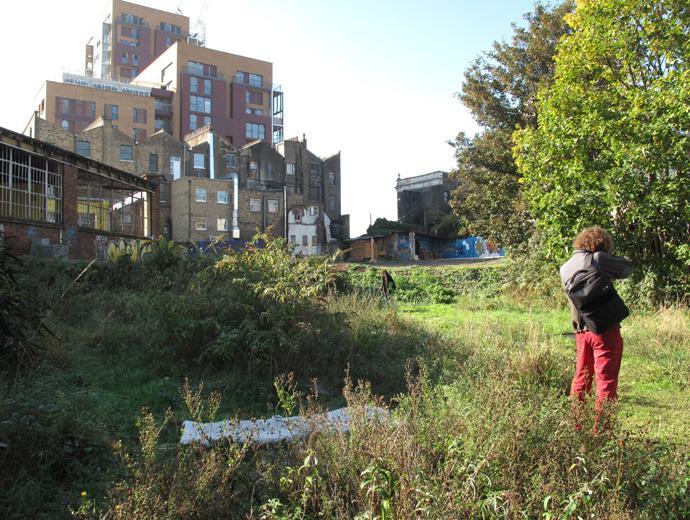 Located in the London borough of Hackney, adjacent to one of the busiest transport hubs in east London, the Eastern Curve Garden sits on the bend of of an old railway line, which once linked Dalston Junction to the North London Line. The railway line closed in 1944 and the tracks were removed in 1965 leaving a sliver of derelict land. The space was boarded up, abandoned and left to become an overgrown urban junkspace. 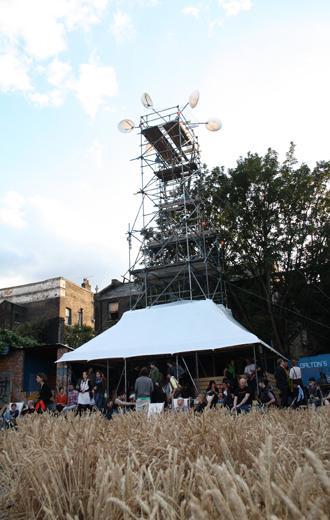 Above image: The Dalston Mill, photographed by Eliot Wyman

Forty-four years later, the Design for London initiative ‘Making space in Dalston’ identified this forgotten strip of land as one of several opportunities to create desperately needed public green space within the heart of Dalston. 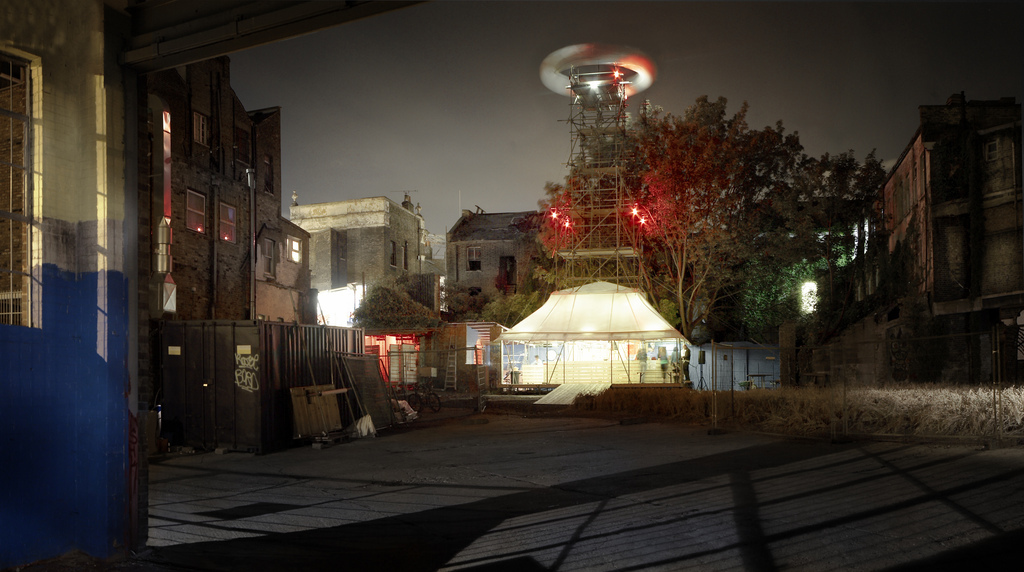 Image above: The Dalston Mill, courtesy of EXYZT

Local landscape architects J&L Gibbons collaborated with muf architecture/art to explore the possibilities for the site. Using a ‘grass roots’ approach, their aim was to develop a vision that would embrace local communities, invite public participation and nurture the existing qualities of the area. 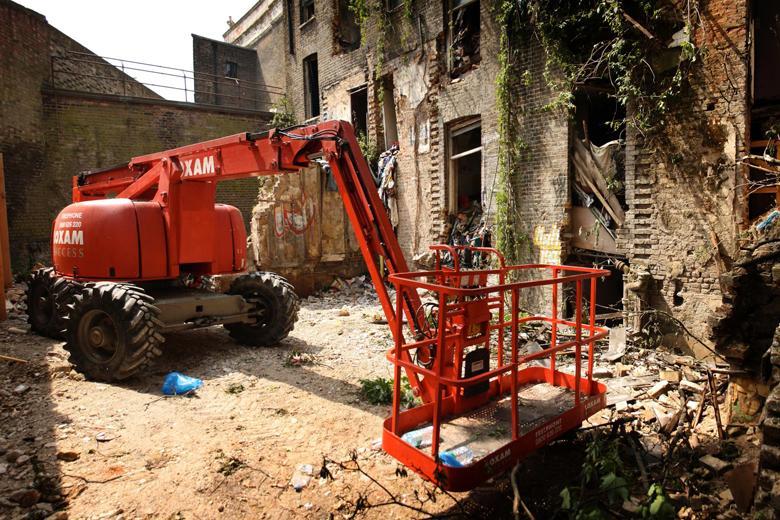 As part of the design process, experimental architectural collective EXYZT was commissioned to construct a temporary installation on the site that would act as a means of exploring and evaluating public responses to new and different uses for the space. The installation, entitled The Dalston Mill, consisted of a five-storey functioning windmill constructed from scaffolding, which was used to produce flour for a local bakery. 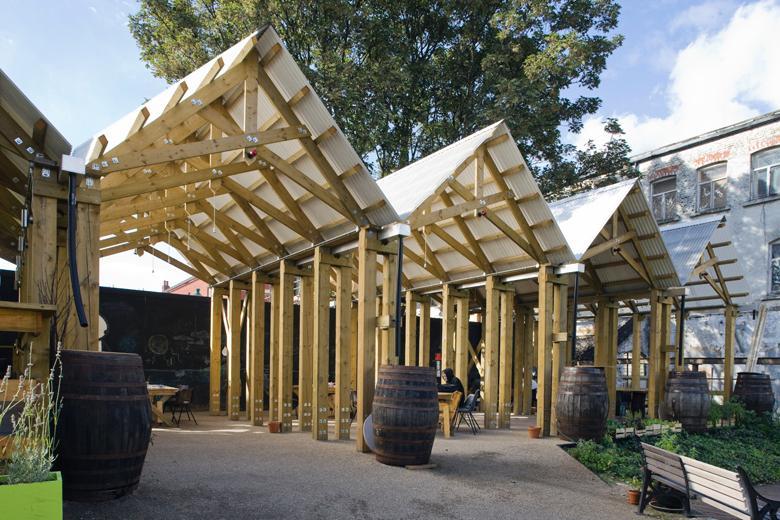 Alongside the mill, a 20 meter-long wheat field was installed by environmental artist Agnes Denes as a reinterpretation of her 1982 New York installation ‘Wheatfield’. Over the coming weeks, a programme of events presented by artists and local organisations filled the space and 12,000 people ventured through the old wooden hoarding and into this previously neglected wasteland. 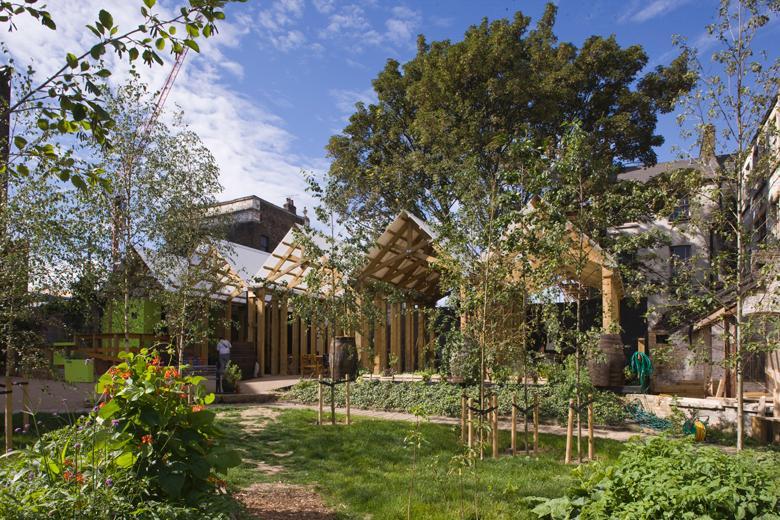 The use of a temporary installation to provide means for a real-time consultation process proved to be a huge success. The initiative demonstrated to local people that change can be a positive experience, increasing social cohesion and altering perceptions of place. 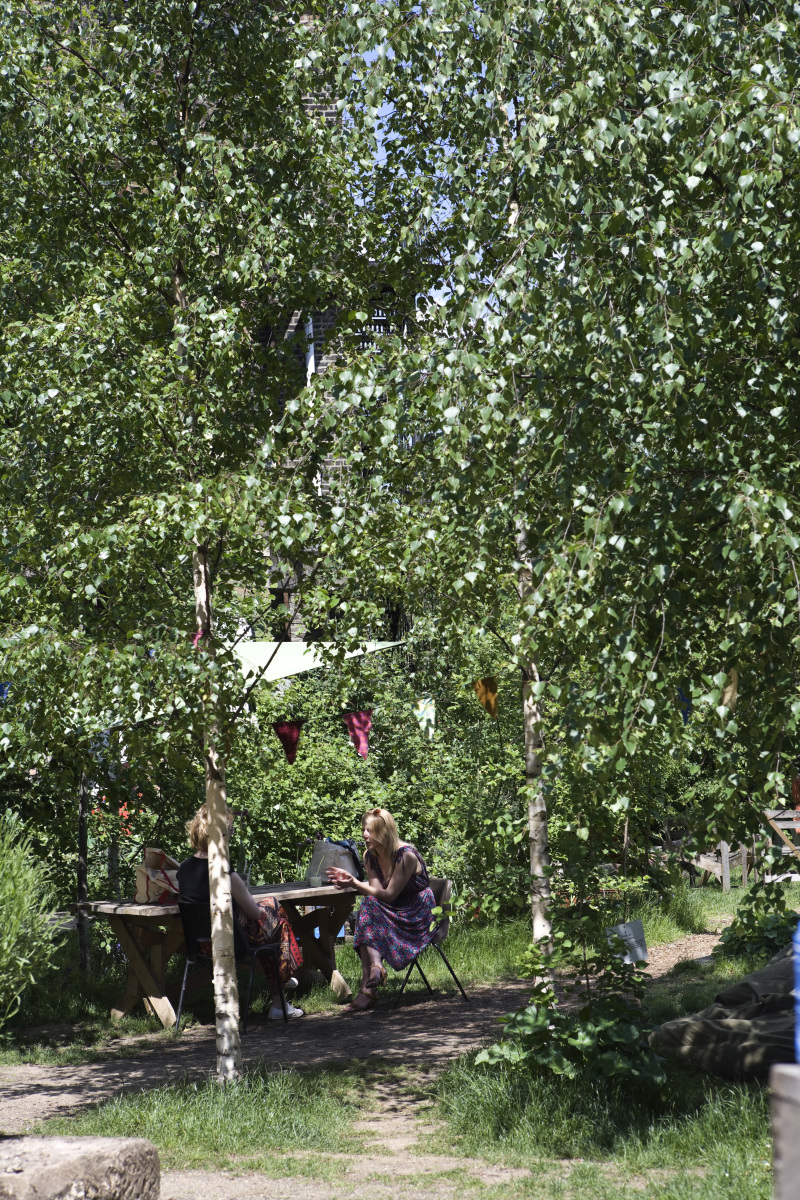 The resulting concept for the space was an ‘eco-garden’ that would retain some of the wild aesthetic of the abandoned site and provide opportunities for community involvement and management.

EXYZT returned in 2010 to design and build a barn-like pavilion on the site that would allow year-round community-run activities. A design and construction apprenticeship scheme was set up for members of the local community college and youth group to assist in the construction of the timber pavilion. 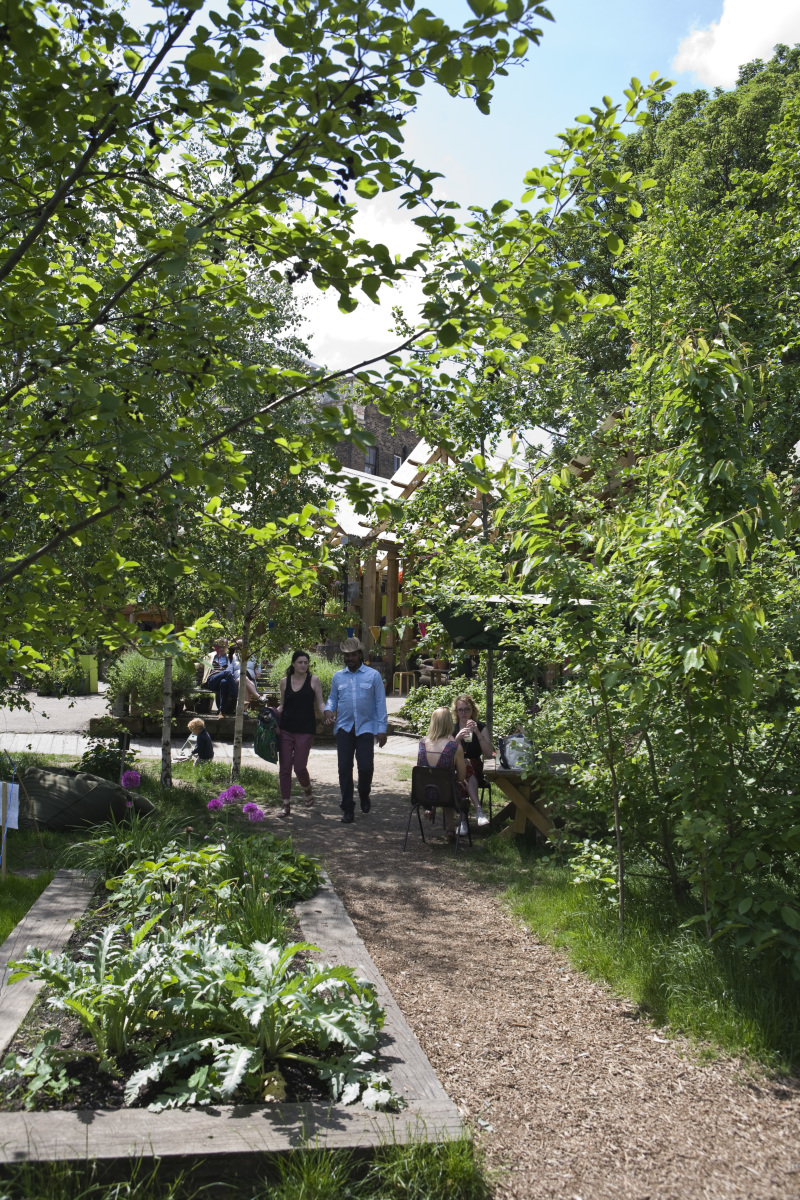 J&L Gibbons responded to the site with a ‘light touch’ approach, maintaining existing vegetation where possible and introducing native species that would thrive on the old railway land.

Clusters of Birch and Alder trees were planted in the Spring of 2010. These pioneer species are often the first to colonise derelict land in British urban environments and, three years on, are already beginning to create a woodland-feel in the garden. Giant bean bags and filled hessian sacks are strewn beneath the trees, providing places for visitors to laze on sunny days. 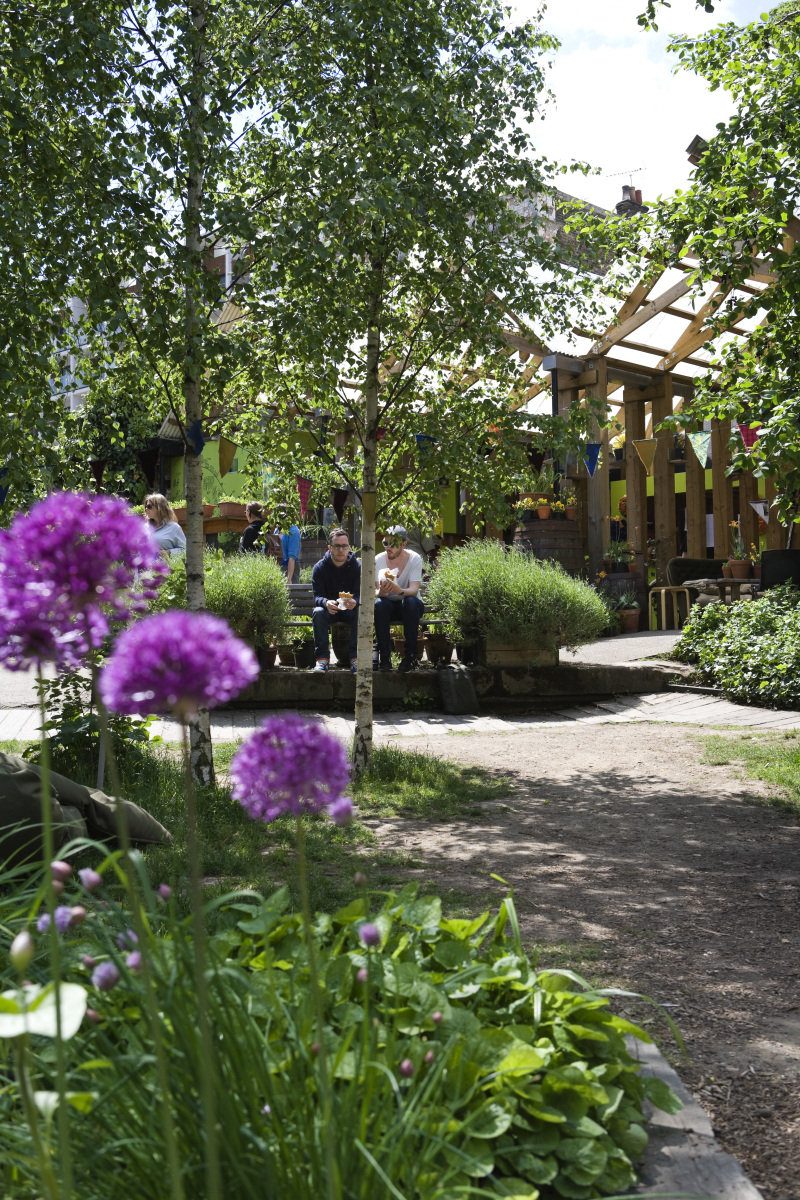 Reclaimed materials have been used wherever possible, including a boardwalk constructed from railway sleepers and old whiskey barrels that collect rainwater from the roof of the pavilion. Garden chairs have also been made using pallets reclaimed from the nearby Ridley Road market. 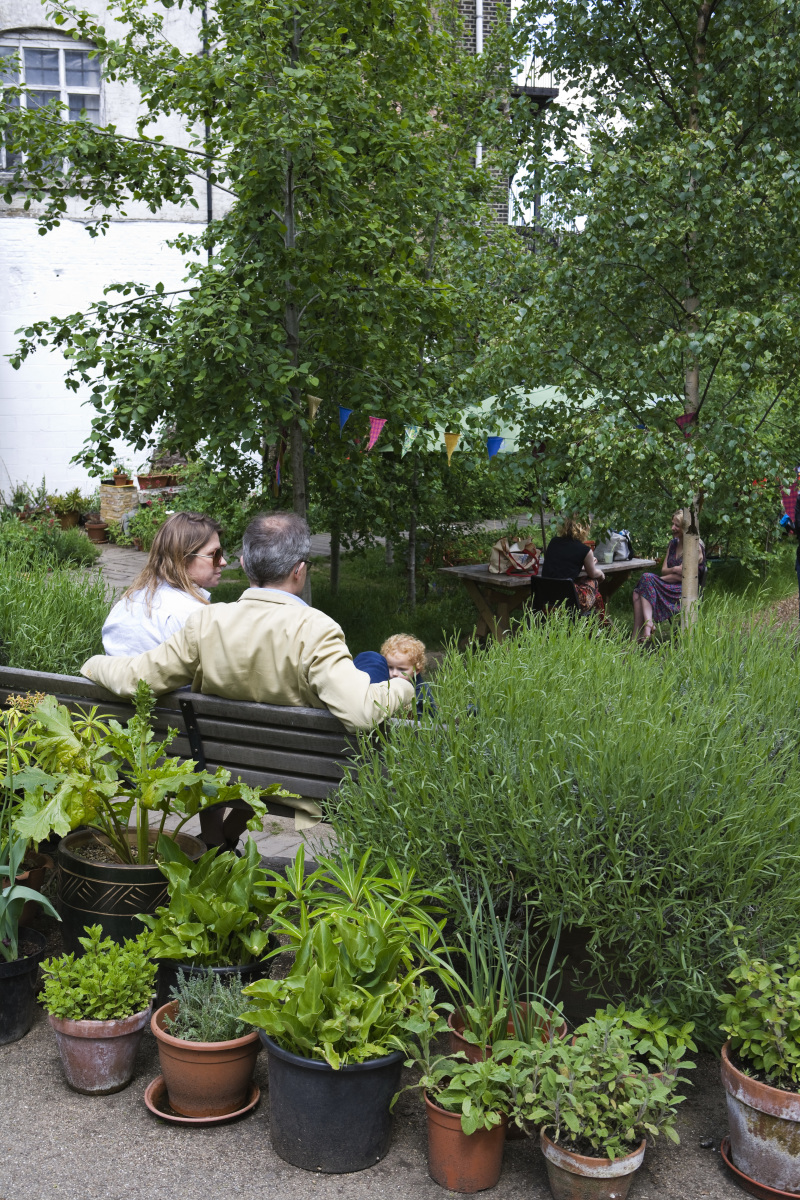 Members of the local community were involved at every stage of the design and build process. The pallet chairs are the result of on-site workshops, during which adults and children were shown how to construct the chairs from a template based on a design by Italian furniture designer Enzo Mari. 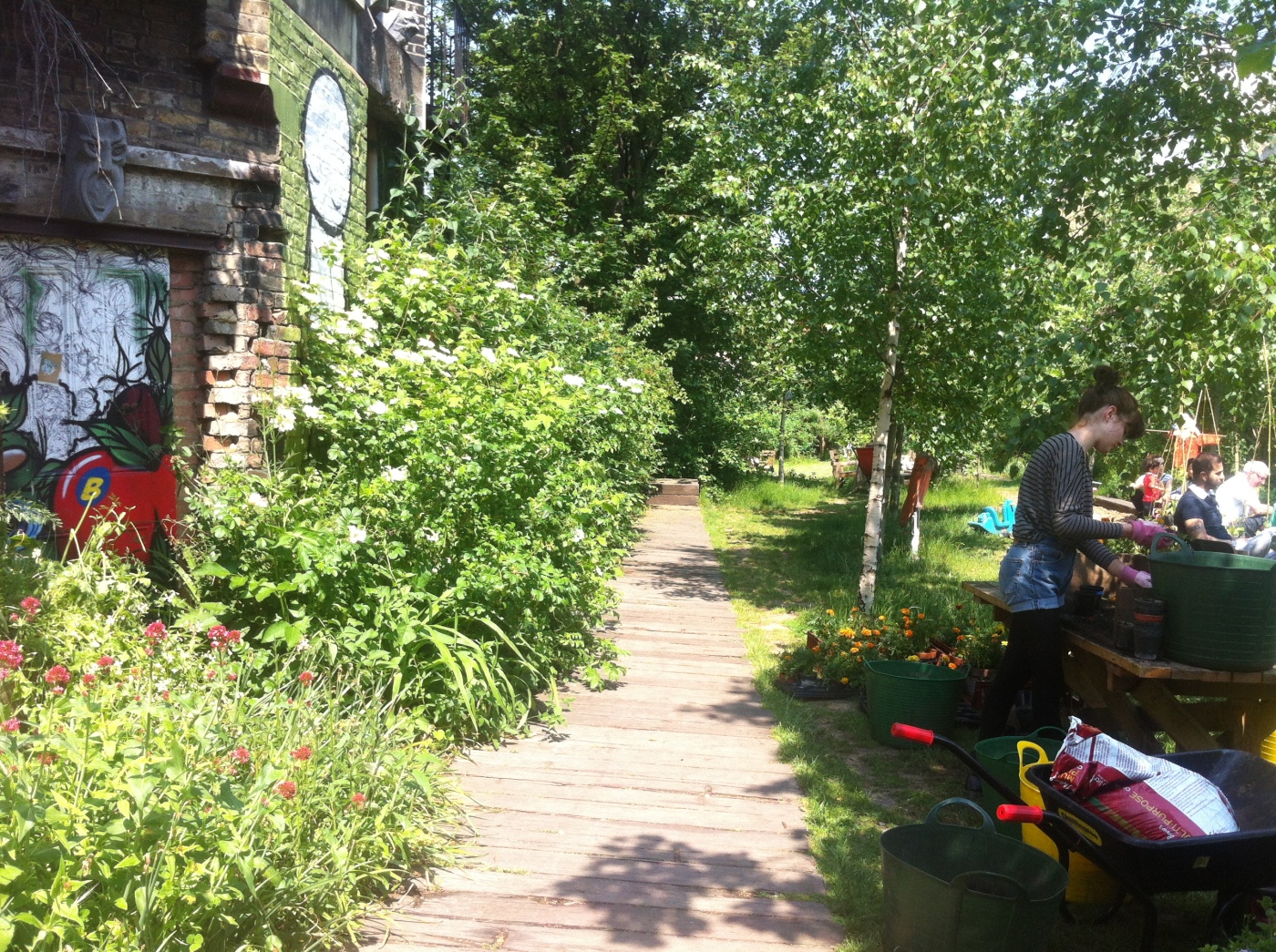 Above: photograph by Helen Buckle

Bird-boxes, butterfly nests and bird feeders were made and decorated by local school children and a clay oven for making bread and pizza was also built by residents of the borough. On the opening day, local street artist Stik was commissioned to paint a mural on one of the walls entitled ‘putting down roots’. 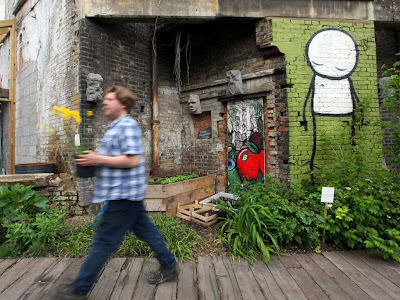 Above: photograph by Susannah Ireland

Existing vegetation, including Buddleia davidii (butterfly bush) and bracken, have been left to thrive on the site, creating wilderness areas for wildlife and opportunities for visitors to pick blackberries. 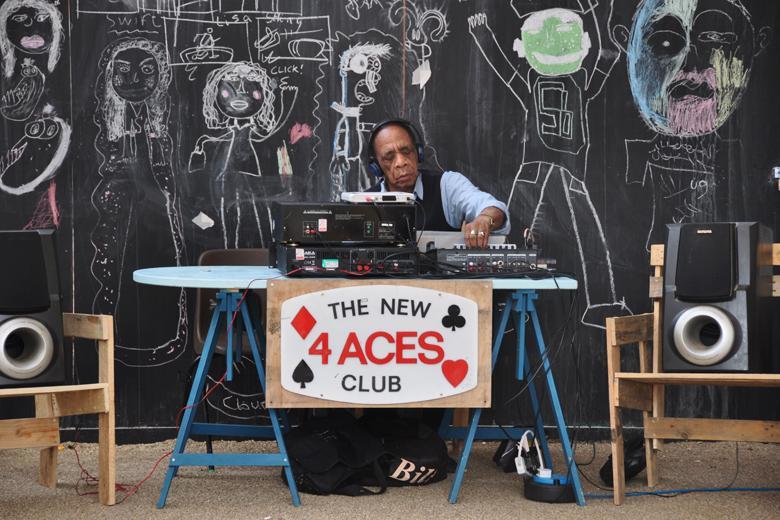 Copses of young Hazel, Wild Cherry and Pussy Willow are scattered throughout the garden creating private areas for seclusion as well as food and shelter for wildlife. A native British hedgerow runs along the northern edge of the site, which includes Hawthorn, Field Maple, Hornbeam and Guelder Rose. 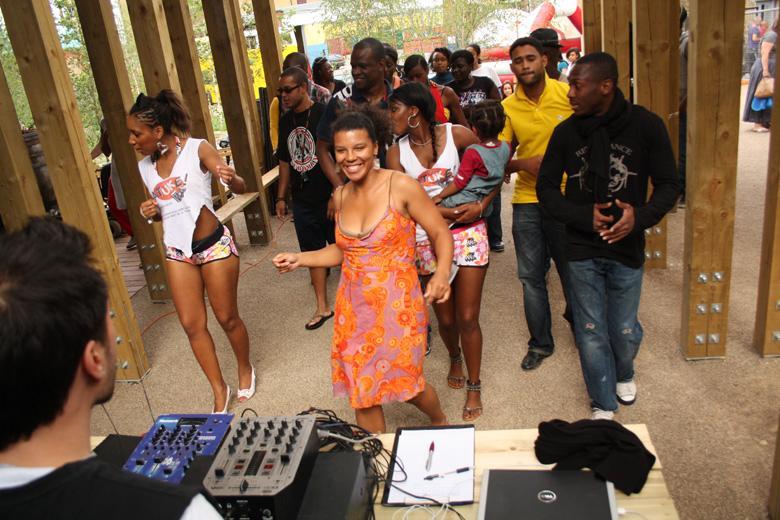 Raised planters full of herbs and vegetables are set amongst the open woodland, tended to by the Eastern Curve Gardeners Group. Members of this local community group meet regularly to weed, water and plant and then share the fruits of their labour around a large oak table, designed by Nicolas Henninger of EXYZT.

The garden recently hosted as series of events as part of the Chelsea Fringe Festival, which is an ‘alternative’ spin-off of the more traditional and well renowned Chelsea Flower Show.

The festival runs for three weeks and takes place at various locations all over the city of London. From pop-up meadows to edible high streets and movable skip-gardens, the festival aims to bring nature into the city and reveal the potential of the natural landscape in even the densest of urban environments.

Events at the Eastern Curve garden included pesto-making workshops, pot-hole gardening and a botanical greenhouse bar serving fresh lemonade and mojito cocktails made with produce from the garden. 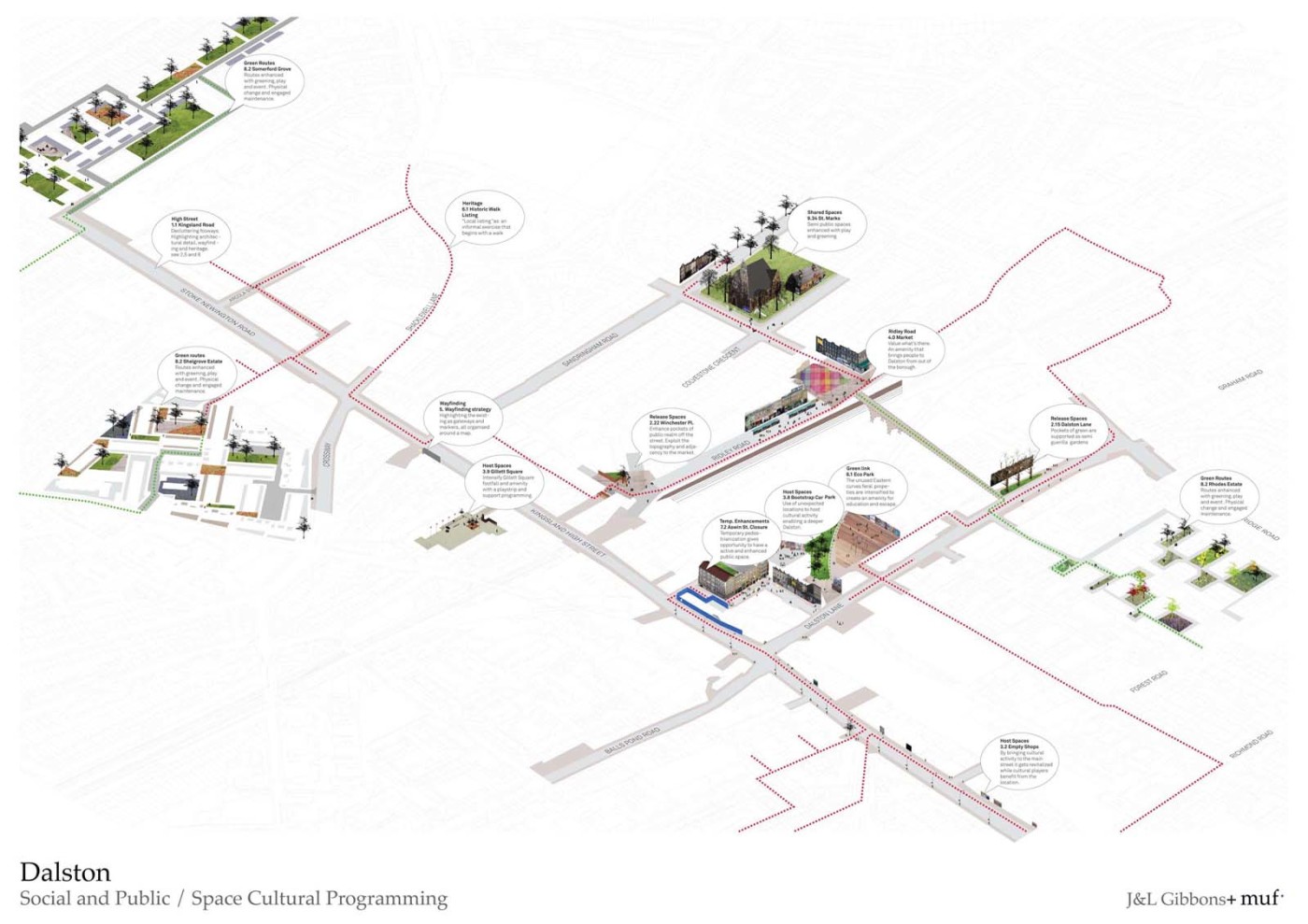 The Eastern Curve Garden is a product of its people and is, as such, a true reflection of place. Its success lies not only in the social capital it has created but also in its physical character. The raw, wild aesthetic of the garden enhances its secret nature and the feeling of escapism – a rare quality I was delighted to find around the corner from my gardenless city apartment. When I first passed through that small green gate, I felt a real sense of discovery. And when I wandered down to the end of the garden and glanced back towards the city through the copses of Hazel and Wild Cherry, I felt as though I was lost in London – with a glass of freshly made lemonade conveniently held in my hand. 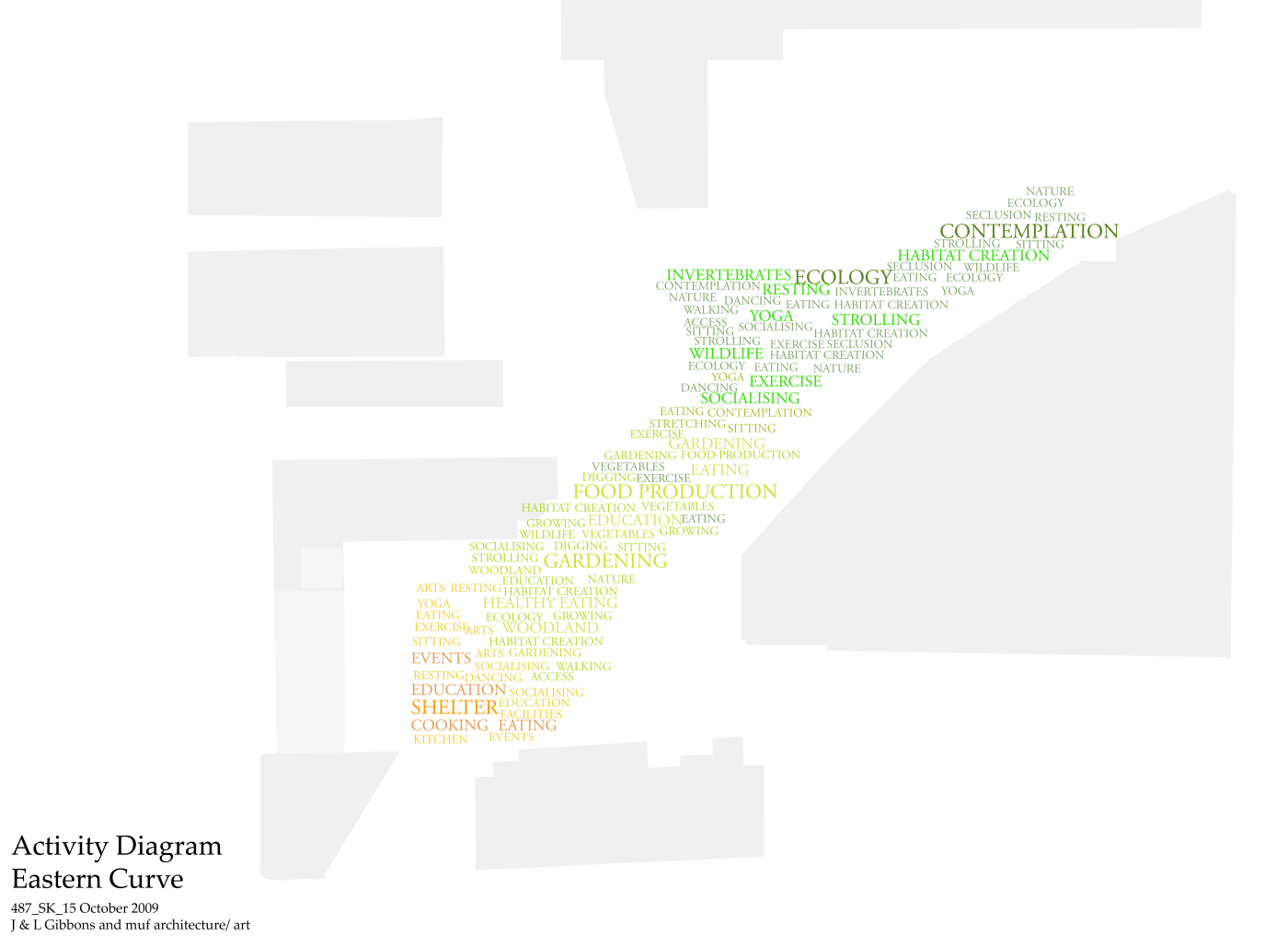 Guerilla gardener Ron Finley would certainly be pleased to see the results of the Eastern Curve Garden, over 5000 miles away from his own green start-up project in South Central LA. We recently posted an inspiring TED talk about his movement LA Green Grounds – check out the video here. 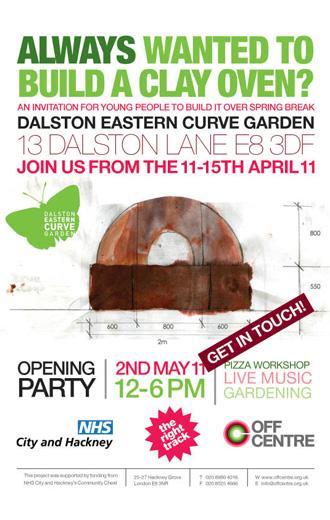 All images courtesy of J&L Gibbons, photographed by Sarah Blee, apart from where otherwise stated. Top image taken by the author, Helen Buckle.