Groundswell Design Group create a fully functional pop up beer garden. A vacant lot filled with garbage and unwanted materials are an eyesore. However, if that lot is beautifully landscaped with a pallet of up-cycled materials, then that lot can become a beautiful destination. As featured on our “Top 10 Examples of Rapid Landscape Architecture” article, the Pop Up Beer Garden project by Groundswell is a gleaming example of success and simplicity at its best. Just like in Philadelphia, where the beer garden annually pops up, many urban areas have unused and unloved spaces. This particular lot in PA was previously used for a trapeze art exhibition as well as a parking lot. However, in 2013, the lot fell into the hands of Groundswell design group where they decided to create a pocket park that consisted of a pop-up beer garden. As quick as the name “pop-up” suggests, the beer garden literally was able to pop-up as a fully functioning gathering space within two weeks of installation! The charming thing was that the whole process was visible to the public. 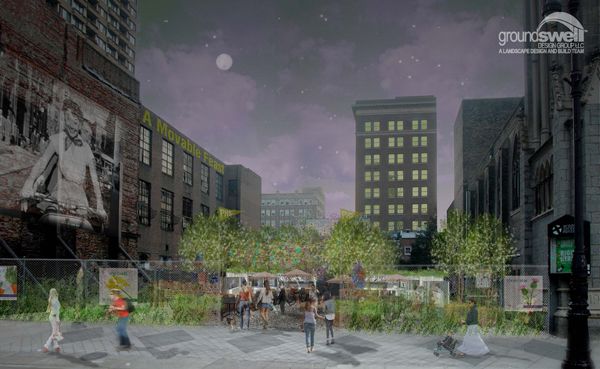 Pop Up Beer Garden by Groundswell

The Design The architecture on site is made up of up-cycled shipping containers used as a beer and food stand. Each of the servicing units had a green roof to moderate the temperatures, especially to keep cool during the summer times. The seating area is comprised of picnic tables that are located underneath large Honey Locusts. Vintage metal chairs and a sculptural terraced seating wall constructed from old shipping pallets and strings of market lights also added a unique character to this former parking lot. The open space shelters users from the hot sun and at night the place turns into a magical sequence of glowing night lights and twinkling stars under the evening dusk. 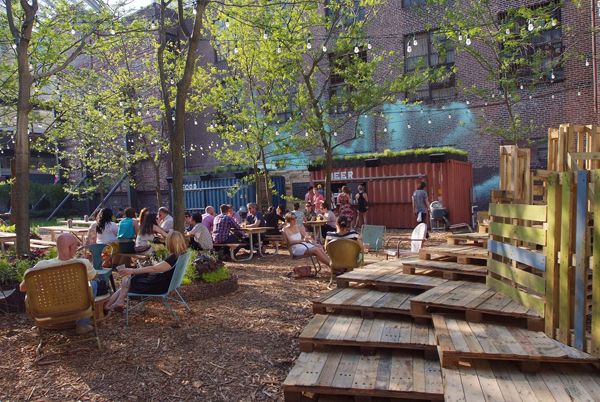 Social life Adding to the site’s colourful past, the intimate place does not only host picnic style food services and a beer garden, it allows for a fun and playful arrays of art exhibitions, outdoor films (a rare amenity to come by these days), live music and grilling. It is no wonder that this little pocket park has drawn attention to not just the local community but also from distant visitors, keeping the park bustling with life. 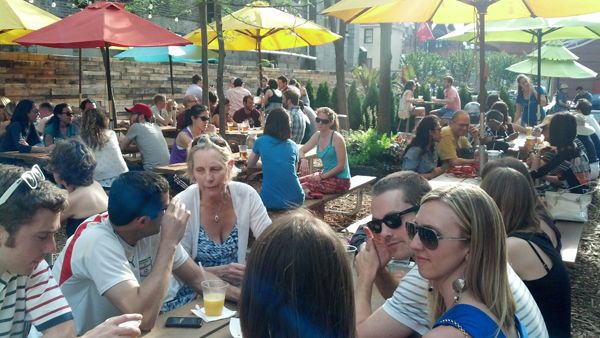 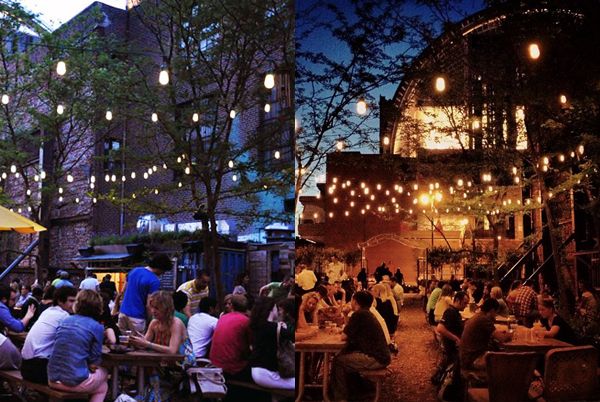 In many cities, parks are a permanent space of recreation, a central node that is designed and maintained to withstand the tests of time. Yet the beautiful and successful thing about this park is its impermanence. Should the space be designated to become something else; this Pop-Up Beer Garden can be easily transported and installed in any location. It does not need to be identified by the genius loci of a place that became very important to our design field many years ago but uses its simple functionality and materiality- which is simply based on the idea of bringing friends, families and strangers together to eat, drink and enjoy each other’s company and creativity. 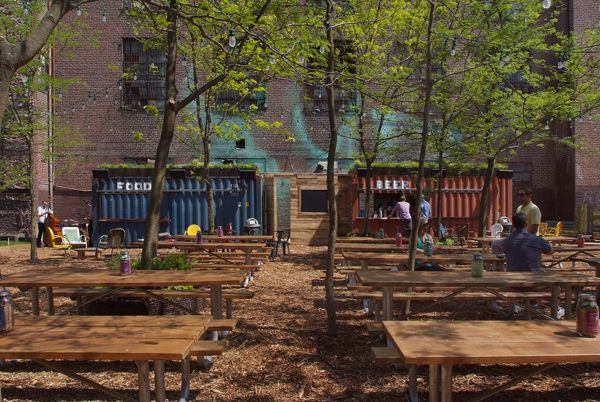 The design embraces creative thinking in crafting a new atmosphere with the old. Whether it is the actual redundant space itself turned into a gathering space or whether it is the old, unwanted materials being recycled to give a new function and life. If every redundant vacant lot could be embraced by this idea of impermanence, temporality and ‘pop-ups’ to create lively niches that support the local livelihood as well as celebrate the art of creativity in the making process, it could really change the perception of vacant areas as dark scary corners of a city, piling up with garbage. These designs might just end up being more successful than they intended to be and could really become the life of the community, giving a great addition to a city, even if it is for a fleeting moment. The pop-up garden aims to pop-up some more, who knows when and where, nevertheless, it keeps the people excited and the anticipation just makes it that much special. You may also like to read: 72 Hour Urban Action Top 10 Examples of Rapid Landscape Architecture Article written by Win Phyo Featured image: Groundswell Design Group Published in Blog