We reviewed Youtube video Five Crazy Bridges for Animals by Minute Earth, looking at the innovative solution of animal bridges. “Why did the chicken cross the road? We may never know since she probably never got to the other side“. This is how Minute Earth’s educational video (Five Crazy Bridges for Animals) puts forth a plethora of questions for discussion. What are the consequences of wildlife roadkill? Can wildlife and highways coexist safely? What exactly are wildlife crossings? How effective are animal bridges? Or is it all about our own attitude or the absence of one? If you feel skeptical about the effectiveness of wildlife crossings, there’s nothing wrong with that. This video doesn’t seek to convince anyone of something they don’t want to believe. On the contrary, its basic purpose is to inform and shed light on a subject that is widely discussed, but narrowly assimilated.

Even within the short two minutes, the animation will manage to set you thinking. What’s most important is that after watching it, you can’t just stay indifferent. After that, you will at least have an opinion. And you’ll soon realize how everything depends on your own attitude. Watch the whole video here:


The essence of the problem To start going deeper into the problem, let’s take a look at some of the statistics. It is said in the video that, “In the U.S. alone, about a million animals are flattened by passing motorists each day – and that doesn’t count all the bugs.” We all know that wildlife-vehicle collisions happen, but did you know the statistics? And do you know why this is happening? Although we can’t clarify why for sure, a part of the explanation lies in the nature of animals. “Animals are constantly confronted with barriers, some of them completely natural, and others that we build are barely barriers at all. As we build our own infrastructure, we’re also adding to this obstacle course without meaning to, and these unintentional fences are some of the most effective animal barriers out there,” the video explains. 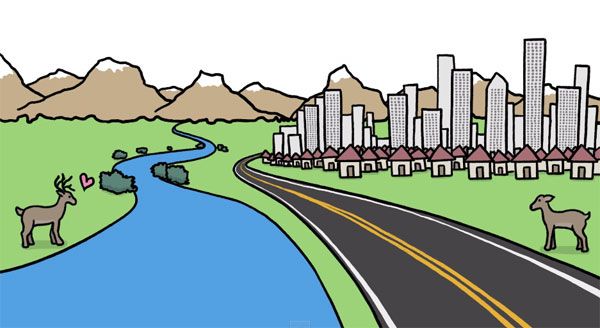 The physical barriers to animals include roads and highways, high-tension power lines, and the discharging of ultraviolet flashes that can frighten or disorient animals. Animals also respond to psychological barriers, such as clear-cut corridors, pipelines, and even painted lines, all of which can subconsciously confine mammals within non-existent limits. Related Articles:

The negative consequences After discussing the reasons why wildlife-related car accidents happen, now you need to examine closely the negative results of those collisions. 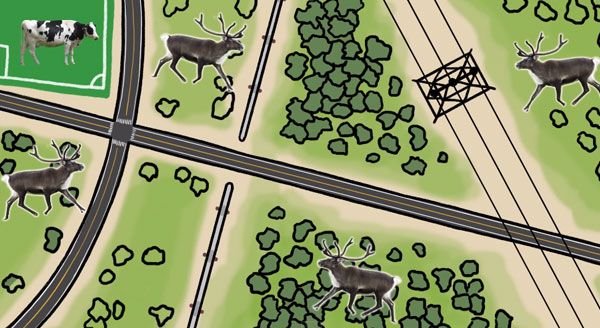 “If enough animals become isolated from food, mates, and protection, entire populations can dwindle and even disappear”. Image credit: Printscreen/source

The video displays it clearly: “While one stranded cow might not be a huge problem. However, if enough animals become isolated from food, mates, and protection, entire populations can dwindle and even disappear.” Considering that aspect, there is even more to be added to the list: harms caused to endangered species, loss of valuable livestock or pets, death, and suffering of animals stuck by vehicles. As for humans, the list of damages continues to grow: injury or even death of vehicle occupants, the money spent to repair damaged cars, the economic losses (cleanup and repairs), as well as the unpleasant sight of roadkill in tourist destinations.

With all those unfavorable effects of wildlife-vehicle collisions, there has to be a rational solution. The first thing that comes to people’s minds is “no obstacles, no problem”. But on second thought, giving up roads, power, and pipelines doesn’t sound like such a good idea. Even if we get rid of all the physical barriers, wildlife has already strongly memorized them, meaning that their restrictive power is still active. So basically, this is not a solution. 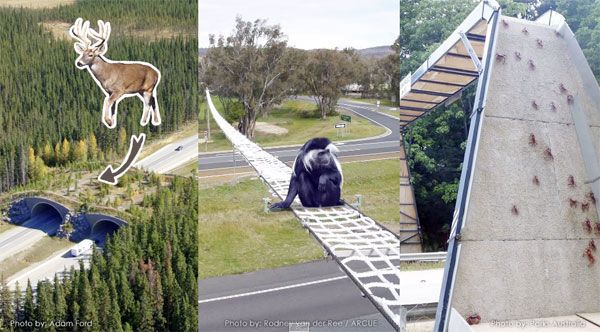 “Luckily, a little ingenuity goes a long way in guiding animals over, under, or around the obstacles we put in their way. Just as a footbridge helps us cross dangerous roads, we can build overpasses that help deer, monkeys, and crabs do the same”, as it is said in the video. Such civil structures include overpasses, underground tunnels, salmon cannons, and bridges. Effectiveness To support those statements, here are some of the successful worldwide examples of animal bridges: WATCH: Animal Bridges – Life-Saving Wildlife Crossings


In order to estimate the results of animal bridge construction, cameras are installed as a method of observation. As you can see in the following video, the results are more than satisfactory. WATCH: A Busy Wildlife Crossing – Slow Version