Community leaders bound together and take on the initiative to turn an old unused industrial site into a thriving public park. Along the banks of the Bronx River, there once was a concrete-mixing plant that operated for more than 40 years. By the mid-1980s, the plant had closed. In the late 1990s, the fate of the site was to be determined at a public auction. Fortunately, visionary community groups, leaders, and partnerships came together to make sure that the site became a public park. With concrete molds everywhere, old factory-like structures occupying much of the real estate, two to three feet of concrete covering the site, and 32,000 tons of soil contaminated with petroleum, it might have been difficult to embrace the land’s potential. But community groups did not give up. A group that would later become the Bronx River Alliance, the Hunts Point Economic Development Corp., community boards, elected officials, Youth Ministries for Peace and Justice, and other groups showed their support through grassroots efforts to clean, protect, and improve the site that would become Concrete Plant Park. 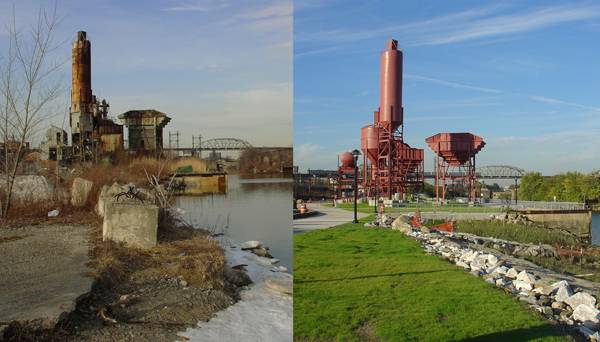 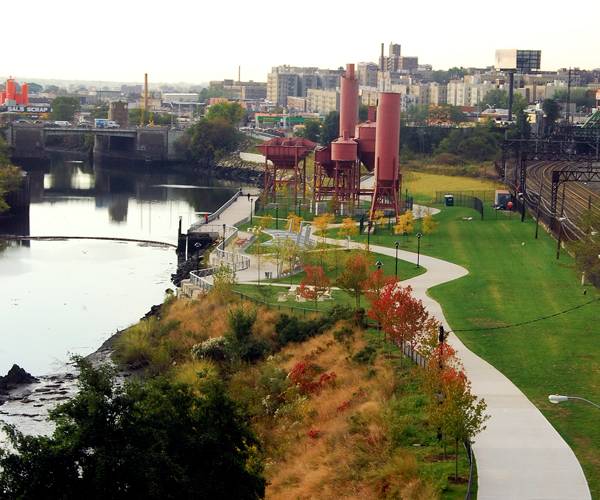 Building on history Mituzas explained that the decision was made to keep the concrete plant structures in place for many reasons. One was that the structures were preserved and highlighted with a mellow terracotta color to show the industrial past as a symbol for the neighborhood and the community. Another goal of the project was adaptive reuse. 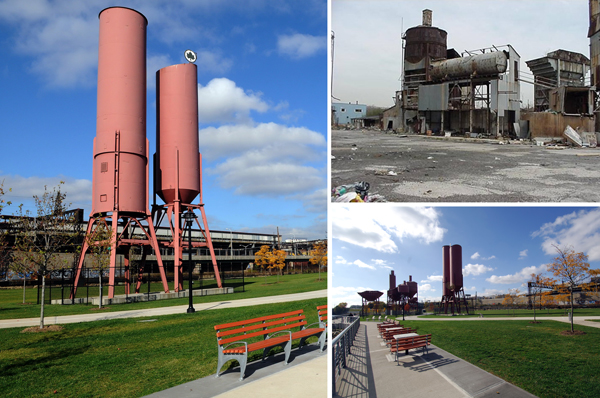 Keeping industrial structures was imperative to the success of the design. Photo credit: Malcolm Pinckney and NYC Parks

Design challenges Throughout the design and construction of Concrete Plant Park, the team was challenged with limiting the amount of materials brought on site. The material pallet was dictated by the local history and what was available on site. Sand, gravel, and concrete blocks found on site were incorporated in the design to divert landfill waste and minimize materials brought on site. The 1,900 linear feet of waterfront in Concrete Plant Park provides visitors with a unique opportunity to connect with the river visually and physically. Students at the nearby Fannie Lou High School in the Bronx frequently utilize the site as a learning laboratory to test water quality and monitor the river. “Do your homework before you get shovels in the ground.” One of the major lessons learned by the design team, according to Mituzas, was to “do your homework before you get shovels in the ground.” Landscape architects need to research the area, investigate the site, test all aspects of the existing conditions, and take all of that into consideration during the design phase. Thorough research may help avoid costly mistakes. 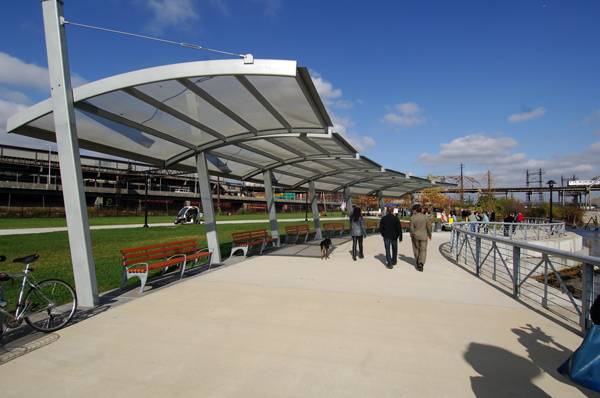 It is interesting to note that Concrete Plant Park weathered Super Storm Sandy without major damage because it was the product of good landscape architecture. Designers created a flood plain and minimized hardscape abutments upstream from Concrete Plant Park to protect properties downstream. This park is one piece of a larger network of trails and public open space along the Bronx River. As missing links are acquired and developed, it will be exciting to see the neighborhood and community continue to embrace the Bronx River and create a healthy place to live, work, and play. This project has since thrived and been embraced by neighborhoods, community groups, and visitors because it is a prime example of collaborative design. The vision for the park was not shaped by one individual or group, but was rather a joint effort by all stakeholders. See also: Industrial Site Transforms into Beautiful Landscape Top 10 Reused Industrial Landscapes Article written by Rachel Lynn Kruse Published in Blog