Landscape architects and urban planners are frequently tasked with translating the unique desires of a community into a meaningful public space that seamlessly integrates into the existing community fabric. In order to ensure the long-term success of such a project, sincere and intentional community engagement efforts must be made to understand the community’s needs and incorporate their values. Understanding how to best engage community stakeholders in the design process is critical to ensuring a high level of community investment and pride. During the Land8x8 Lightning Talks in Seattle, Tim Slazinik, landscape architect at GGLO Design, discussed how his firm is looking for ways to engage the public in a deeper, more impactful way.

Community engagement strategies take on many different forms, each of which elicit varying degrees of public participation. The extent of community involvement can range from being passively informed of a project’s development, to actively sharing roles and responsibilities in decision-making. Slazinik noted that greater impact comes from intentionally building up a person’s capacity to contribute at higher levels. Often called participatory design, this process provides a platform for community members to be more informed about the design, and invites them to be part of the decision making process. Because they are well informed from project inception, their decisions are based on a deeper understanding of the project, and their feedback is more valuable.

“We want the communities to design with us, allowing the community to build their own vision for the future.” – Tim Slazinik

A collaborative approach to community engagement contributes substantially to the long-term success of the project. Slazinik explained that GGLO is constantly experimenting with different public engagement techniques, as they work to discover the best tools to bring people together in a way that fosters creativity, engages a wide audience, and produces a meaningful end product. During his presentation, Slazinik shared some of the techniques that his team has employed to facilitate the public engagement process and elicit creativity. 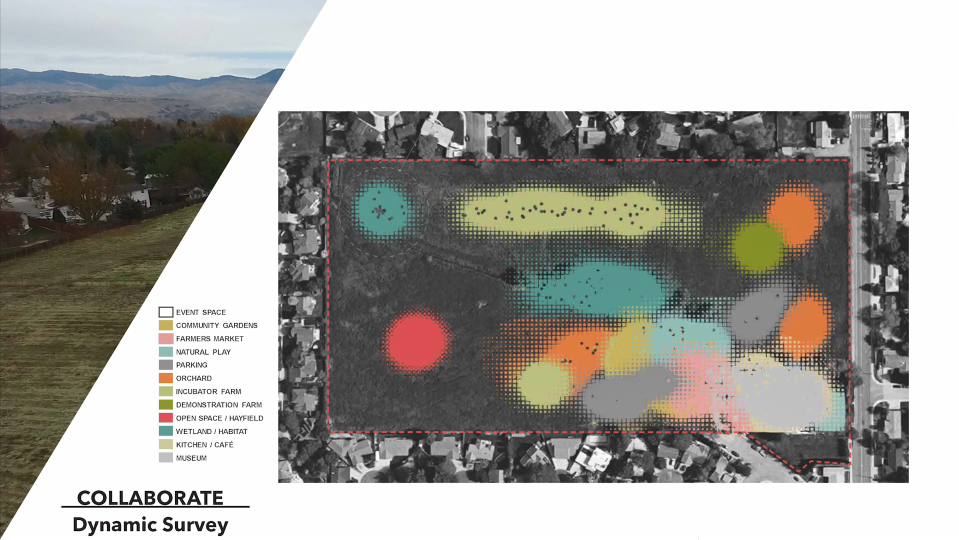 The first, dubbed Dynamic Survey, allows community members to provide their input through an interactive online survey. Utilized on the Spaulding Ranch development in Boise, ID, this software gave a wide range of interested parties the ability to provide their feedback at the on-set of the project. After agreeing on a series of different program elements with input from a wide range of interested parties, GGLO created an interactive online project portal where users could actively engage in the layout of the program elements. Elements were scaled to size and users could “drag and drop” the elements on the site to share their preference for how the site should be laid out.

By utilizing an online, interactive survey, the team was able to get input from a larger audience, and draw on local knowledge. The resulting data was mapped out to visually demonstrate the most preferred location for each program element, giving the design team a preliminary layout for site elements and preferred adjacencies. This process resulted in a site plan that represented the unique needs of the community and identified issues and opportunities that may have otherwise been missed by the design team. By engaging the community early in the process, the design team was able to move forward with the preferred concept knowing it would be supported by the community. 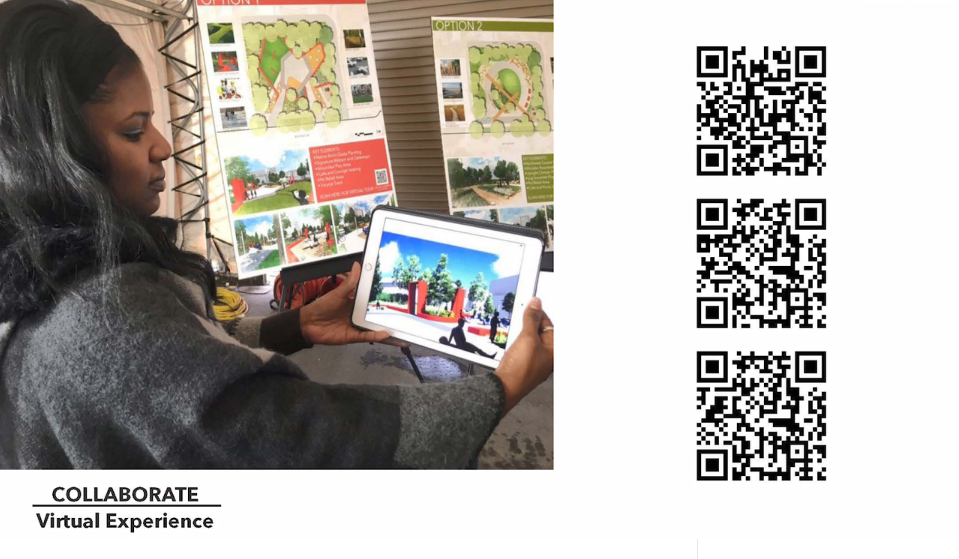 The second tool Slazinik discussed, Visual Experience, was utilized on the Seattle Junction Park project in Seattle, WA. During a public meeting, Slazinik and his team used virtual reality to engage the community in an exercise that invited them to imagine how the site could be altered. The design team developed three concepts for the site, but instead of providing just a rendered site plan and relying on character imagery to depict the different concepts, each concept was digitally rendered. This enabled the public to get fully immersed in the nuances of each concept and visualize the scale, material, and character of the space. By digitally rendering the three concepts, stakeholders were able to more fully understand the designs, resulting in more meaningful feedback that would later inform the final iteration of the design.

New and innovative community engagement methods, such as the ones discussed that embrace new technologies, are aiding designers in their quest to better bring the public into conversations on their future. By committing to a high quality community engagement process, the process can uncover ideas that contribute to the success of the project, and empower individuals to take ownership of their public spaces.

—
This video was filmed on June 8th, 2018 in Seattle, WA as part of the Land8x8 Lighting Talks sponsored by Anova Furnishings.