New York City’s landscape has much to offer. From its soaring skyscrapers to its vast and unique parks system, the fact that water plays a significant geographical and historical role perhaps falls to the wayside. There is a structural reasoning- even with over 520 miles of city shoreline, most is what’s considered “hard”. Bulkheads and concrete walls create a stark divide between people and the water they live on all the while diminishing critical habitat.

The importance of water does not go unnoticed to Brad Howe, PLA and Senior Associate at SCAPE. In fact, it is central to what they do. “The frequency which with we experience water and its capability of destruction is only increasing,” Howe states as he describes the hard edge’s role in poor stormwater infrastructure. Further, its these same industrial edges that put pressure on the existing “soft” shorelines, leading to their erosion and demise. SCAPE’s recent coastal work aims to reinvent New York’s edge through their Living Breakwaters project.

Living Breakwaters is a Rebuild By Design winner and was Howe’ fist project with the firm. The project goes beyond simply installing breakwaters, though, as he describes the feature as just a “moment” within a larger working system. “[It] reimagines coastal risk reduction as a layered approach” between culture, ecology, and risk reduction.

Through a massive multidisciplinary effort, Howe describes how SCAPE’s process leads to significant and accurate data collection to validate their efforts in the eyes of state, local, and federal agencies, those responsible for the protection of coastal areas.

The first step is a large effort towards existing data collection both within the site at Staten Island and from the proposed design elements. Surveys of habitat documentation, gradations of rock porosity, and recast ecological concrete are all tested for their intended individual functioning and to reach the overall goal- “[to] foster a dynamic, underwater, new form of habitat.”

Next, physical hydrodynamic modelling is performed to detect flow of water and possible sedimentation build up. Structural strength of materials is also tested, such as in cases of storm wave resiliency. When the techniques are in place, plotting the restoration approach is developed. Will oysters come, plants grow? SCAPE begins to mimic similar conditions to be expected on the breakwaters, oftentimes getting their team directly into the water to see for themselves. 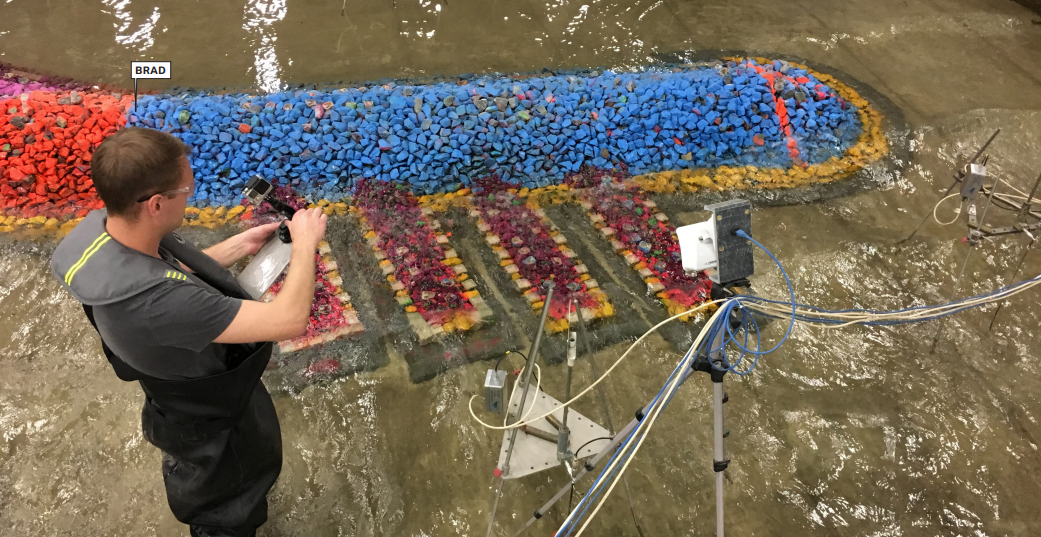 Howe describes the next step as possibly being the most difficult- communicating with federal and state agencies. The opportunity becomes how, exactly, to present accurately and persuasively these strategies to agencies that serve to protect these waters? Ideas and goals become binders worth of paperwork- a concept that may seem tiring to most, but necessary at this point in the process. “All of that data… contributed to us kind of making a case that these parts of the breakwater designed for habitat can be nearly self-mitigating.”

With the bureaucratic petitioning complete, Howe states that designing for data collection is the last step in the Living Breakwaters process. A monitoring plan with built in control groups are created on site to compare effectiveness over the years.

SCAPE is happy to announce that Living Breakwaters is finally in its construction phase as the firm sets out to revolutionize New York’s most up-and-coming neighborhood- the sea.