In the face of climate change, urbanization, and social unrest, landscape architects are being asked to do more. No longer can a landscape architecture project simply be beautiful; it must also remedy environmental degradation, address social inequity, support economic development, strengthen communities, and so much more. As the complexity of challenges grow, the importance for a collaborative design process – one that invites new disciplines and diverse perspectives – becomes evident. As an urban ecologist and architect, Stephanie Carlisle advocates for this new way of working – believing that a deeper connection between urban ecologists and designers will result in the creation of better cities and a transformational impact. During the Land8x8 Lightning Talks, Stephanie revealed the synergies between ecologists and landscape architects and emphasized the urgency for greater communication between architecture and the sciences.

“The way forward is a radical embrace of transdisciplinary collaboration and expansion of our definition of design and who is allowed to participate in the design process.” –Stephanie Carlisle

Both urban ecologists and landscape architects are focused on the intersection of the natural and built environment. However, despite their synergies, science and design are not always connected. Urban ecology is a profession rooted in science, which studies the relation of living organisms with each other and their surroundings in the urban environment. Urban ecologists see the entire city as an ecosystem – one that is influenced by the interactions between humans and nature. Urban ecology provides a framework for describing the structure, function, and composition of urban landscapes. Landscape ecology should inform the design approach, to address the changing context of the built environment. Stephanie asserts that for urban ecology to be a useful field and framework for design practice, landscape architects must become more familiar with the methods by which urban ecologists ask questions and interpret data and must begin to make room for targeted ecological experimentation in their projects.

Trained in Architectural Design and Urban Ecology, Stephanie holds a Master of Architecture from the Yale School of Architecture and a Master of Environmental Management from the Yale School of Forestry and Environmental Studies. As Principal at Philadelphia-based architecture firm KieranTimberlake, Stephanie works as an intermediary between the KieranTimberlake Research Group and project architects to facilitate a greater integration of research within all phases of the design process. Her work investigates the interaction between the natural and constructed environment, including environmental and building systems, urban ecology, landscape performance, and life cycle assessment (LCA). 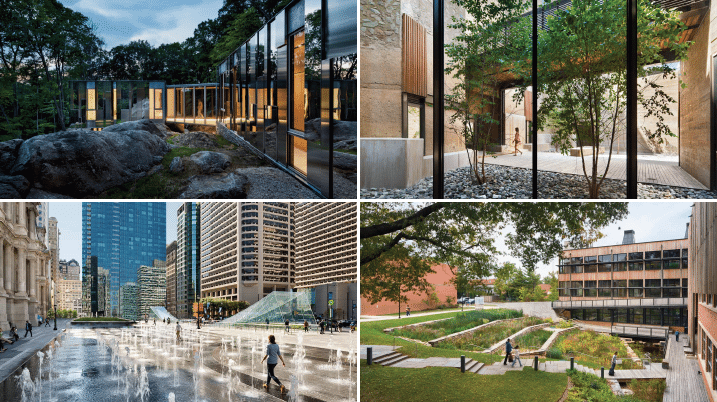 Stephanie’s work has allowed her to explore the processes that underlie performance and test her design interventions. “We are constantly looking for a way to integrate research into design practice, finding, or rather creating, space for designed experiments,” says Stephanie. For example, she has been experimenting and testing several green roofs on KieranTimberlake buildings. As a living system that experiences growth and change, a green roof is an interesting research space for understanding the dynamics of urban systems. This multi-year project examined plant community dynamics on a series of mature intensive green roofs, built over the last ten to fifteen years. By studying how plant communities adapted and evolved over time, Stephanie believes we can change the way we design our work to have a bigger impact.

“I see the strength of landscape in integrating environmental performance with designed technological systems and adapting urban designs to social and ecological challenges.” –Stephanie Carlisle

In order to facilitate communication between the two professions, Stephanie is Co-Editor-in-Chief at Scenario Journal, an online publication devoted to showcasing and facilitating the emerging interdisciplinary conversations between landscape architecture, urban design, engineering, and ecology. She is also a lecturer in urban ecology at PennDesign, arming emerging professionals with tools to be better collaborators. The PennDesign coursework prepares landscape architecture students to employ fundamental ecological mechanisms to effectively model landscape performance over time.

Environmental, urban, and social issues are all interrelated, and in order to be truly transformative, we must work collaboratively. Stephanie believes that by collaborating with urban ecologist, designers can gain a better understanding of the urban environment and the impact of their work, and ultimately create natural environments that are good for both people and nature.