When it comes to resiliency infrastructure, machine-like futures seem to lie ahead for our shorelines. As sea level rise threatens our coastal communities, projects are typically driven by the works of engineers in order to create the mechanical layer of protection cities and neighborhoods need. It may seem as if landscape as infrastructure is an imaginary tale, but according to Gonzalo Cruz, Studio Design Principal, it is the core of what he and the landscape architecture team do at AECOM New York.

“There’s a lot of made-up stuff that we think through… that actually becomes realized” Cruz states in reference to the firm’s projects at the Land8x8 Lightning Talks. Driven by engineering, the team is juxtaposed to design a landscape in which the technical infrastructure necessary for resilience can blend seamlessly into the functioning and flourishment of existing communities. For Cruz, it is about taking advantage of landscape opportunities inside these large-scale and non-human-centric projects.

Coastal adaptation infrastructure makes up the bulk of Cruz’s work. Many projects are adaptations of the Obama administration’s Rebuild By Design initiative which Cruz credits for changing the way designers viewed their role in fighting climate change. The Brooklyn Bridge and Montgomery Central Resilience project, located in Lower Manhattan, is a spinoff of said program and a small piece of a larger Manhattan masterplan. The team was posed to create a line of floodwater protection that shields as much of the existing region while maintaining public waterfront access. 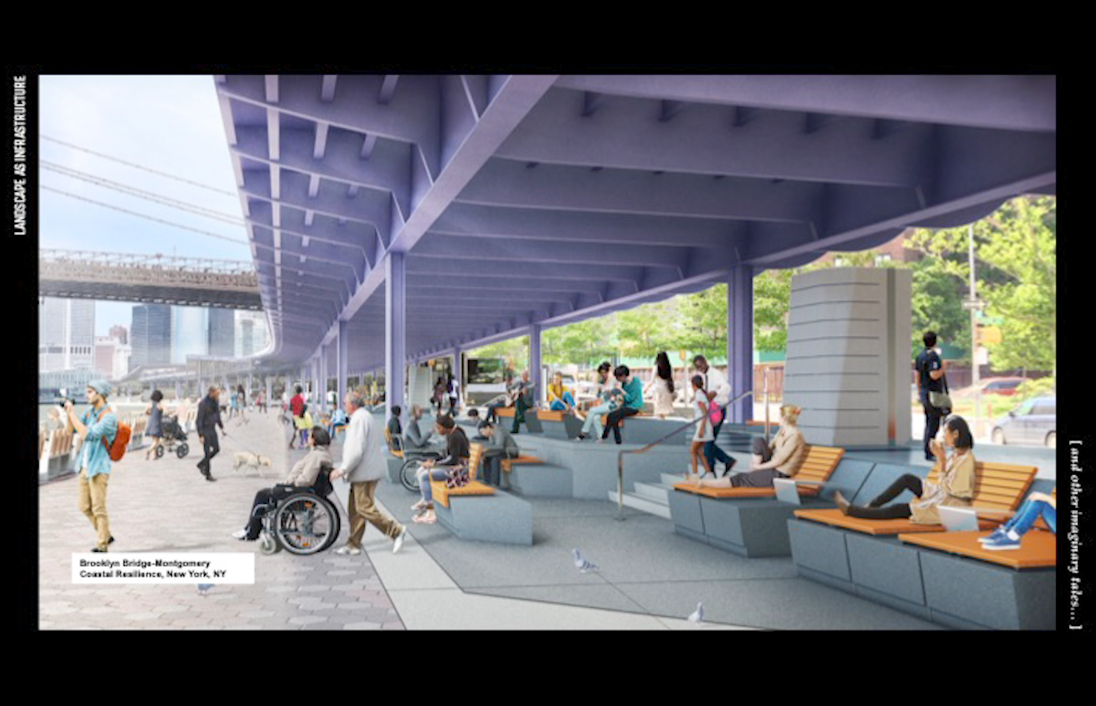 “It’s a very dynamic waterfront to begin with” Cruz states as he depicts the variety of functions found along the shoreline. The insertion of a flood wall, one that is raised and lowered accordingly, meant current waterfront access was compromised without the input of landscape architects. The result creates a layered and diverse community waterfront by the insertion of flexible public space and urban amenities atop and around the mechanism. The storm wall, when lowered, is the main walkway connection for all programming elements, including workout equipment, seating arrangements, and even swings.

Another exemplary project introduced by Cruz is the Battery Park City (BPC) Resiliency Project’s Wagner Park redesign. Wagner Park, set to be inundated by higher waters, was identified as a key for adaptation infrastructure. “We looked into the legacy of how BPC was built over time… There’s nothing it can’t do” says Cruz. To merge the legacy of the park with current and future infrastructure needs, the team forgoes a sea wall by creating a transition area that gradually brings height to the park. The ground plane is thus extended and much of the traditional organization maintained. Yet, the park gets a fresh face and unique programming experiences in which higher ground is not seen as a barrier but instead becomes a part of the experience of place.

Landscape as infrastructure once seemed like an imaginary tale, but it is the work of designers like Cruz that bring big ideas to life. Today landscape architects serve a critical role in not only providing resiliency in terms of the technical but also the emotional and humanistic- a position unlike any other profession. “It’s nice to be curious about these things every day” says Cruz.