Experiencing the global collapse of bee populations.  If you’re like me, you’ll remember being out on a summers day, running around, finding the next adventure and catching bees in an old jar for a closer analysis. Then, making sure they were comfortable with a hand full of flowers, realizing that when these critters were released, they would transform into tiny kamikaze bombers. But growing up it became clear that these fat bottom flyers were becoming a distant visitor to my local park and garden. Through reading Rachael Carson’s timeless Silent Spring an unequivocal inside view developed.  It illustrated the damage pesticides, DDT in particular, caused the ecosystem. It conveyed the fragility of nature. Since the realization of mankind’s destruction, how far have we come? Well, if the worldwide bee population is a sign of things, it seems the odds are stacked up against our valuable pollinators. The bee crash was a long time coming and global leaders were too slow in implementing policies to ban the use of pesticides that harm bees and other pollinators. Bees pollinate over 70% of the 100 crop species that supply 90% of the global food demand. Pollinators are estimated to be worth $224 billion each year in global pollination yields. 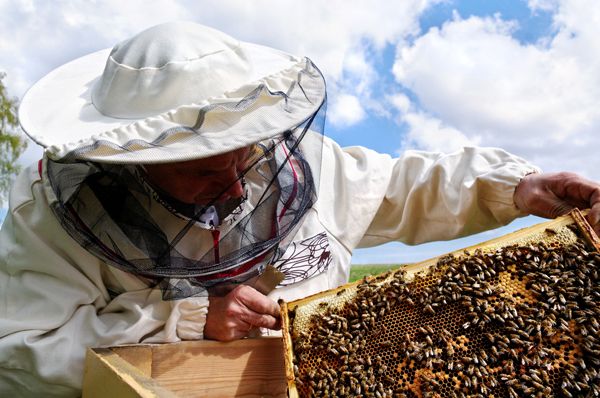 A Bleak Time Asia, Europe and America are feeling the effects of poor agricultural decision making when it comes to chemical industries. Many countries like France have had a ban on neonicotinoids since the 1990s which is a strain of insecticide that damages the central nervous system. It is considered to be part of the global collapse in bee populations. The slow and indecisive EU Food Safety Authority has acted only recently to ban the substance. Unfortunately, it’s a sad time where we see people hand pollinating crops; this is a script that Monty Python couldn’t have written. China’s environmental responsibilities have never been at the forefront of their growth. It is a clear sign of the times in China and globally. The United States has witnessed the demise of a third of its domestic bee population through Colony Collapse Disorder (CCD), a disease that wipes out bee colonies without warning or reason. This has led to another unlikely, but real method of pollination. American beekeepers are transporting their honeybee stocks from obscenely distant locations to California’s industrial scale orchards to pollinate apples and pears, where CCD has led to a complete shortage of pollinators in that region. Agricultural practices are blamed for its over-reliance on insecticide and pesticides. This problem is global and has had significant media coverage, demonstrating the extent and seriousness of the problem. Even Hollywood stars like Jerry Seinfeld, Ellen Page and Scarlett Johansson have jumped on the bandwagon. The movie Vanishing of the Bees and The Bee Movie for us big kids have brought these tiny critters to the forefront. Below: Vanishing of the Bees Trailer Is it too late for a plan Bee? To answer the question above, you must ask yourself a few questions. Should we wait for policymakers to bring in changes? Will you hand-pollinate your plants? Or integrate bee habitats through design and large-scale strategies? I suggest the last option. By looking at some of the problems it becomes clear how to understand ground scale changes and encourage bee populations. The problems stem from intensive agriculture, over reliance on fertilizers and insecticides and the lack of diverse habitats. The urban landscape, on the other hand, has become a sanctuary for bees. This is due to a combination of the actions of urban beekeepers and the diverse, disused habitats, like industrial brownfield sites that litter the urban landscape. In Melbourne, Australia, an urban beekeeping movement is thriving. It started with a few people and the idea of beekeeping on urban rooftops. Rooftop Honey Melbourne began as a man with a hobby and transitioned into a community-based business that provides the city with a new lease of biodiversity. In Philadelphia, Pennsylvania, the Greensgrow Philadelphia Project transformed an abandoned steel plant into an urban farm, which includes a hydroponics system, beehives, nursery, and a farmers market. It provides jobs and new opportunities to the local community, bringing energy back to a once deprived area. Below: TEDxBoston – Noah Wilson-Rich – Urban Beekeeping Landscape architecture as a profession has an obligation to play a part in providing habitats, not just for bees, but all ranges of species to preserve and increase biodiversity. Often, features such as natural playscapes, brownroofs and habitat walls play a key role in providing habitats for insects. Without these microcosms we will without doubt see large-scale effects. Plus, without them it’s going to be impossible to explain “the birds and the bees” properly! Learn all about bees with our recommended book The Secret Life of Bees: A Novel, The Tenth-Anniversary Edition