This week’s Sketchy Saturday top 10. Sketchy Saturday is back after a long break, way too long, and we have a big back log of sketches to get out. As we sort through them, however, the top ones are rising to the top for your viewing pleasure. This week’s selection offers a range of styles and abilities making it another difficult week for judging as it is, of course, challenging to compare vastly different styles and so we have to look at each sketch from an overall point of view and rate them based on how they stand alone and not necessarily when compared to one another. We hope you are inspired by our selection of top sketches by top people.

10. by Kristýna Haisová from the Czech Republic. Landscape Architecture student at the Czech University of Life Sciences in Prague. Works as a planner (designer of gardens, parks) for a small local studio. 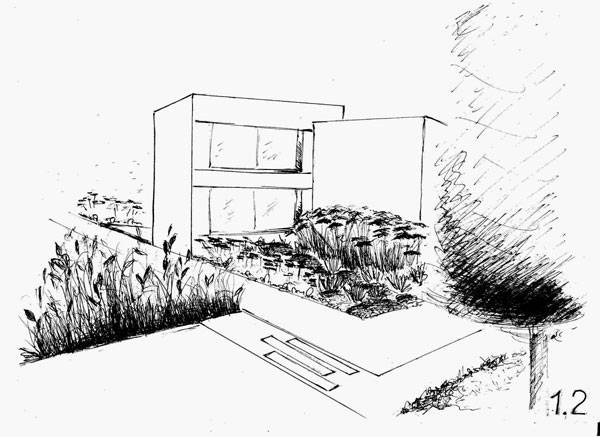 “This sketch was created for a demonstration of our performance of projects we made for our customers. I prefer a simple composition of plants and I would like to show people that even a simple garden is beautiful. Therefore, I drew this sketch. I made this sketch with a pen drawing in perspective”. 9. by Gerard Butterss from Melbourne, Australia 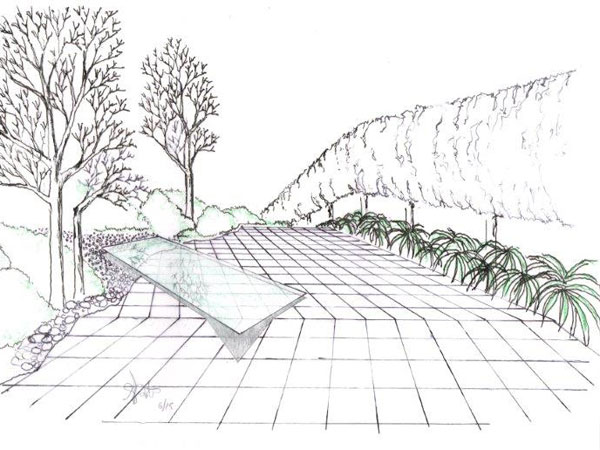 “This sketch is an exercise in parallel and point perspective resulting in a surreal effect. Two different shapes and three shades of paving units suggest a series of planes and shadow lines which are in fact on one level. The sheet of water is rebated into the paving to become a reflective device over the paved surface with a deeper pond at one end. I envisage fish venturing into this sheet to some extent. The illusion would be greatly enhanced by viewing it from any sort of height”. 8. by Klára Zuskinová, self-employed landscape architect at Laruu Landscapes, Slovakia 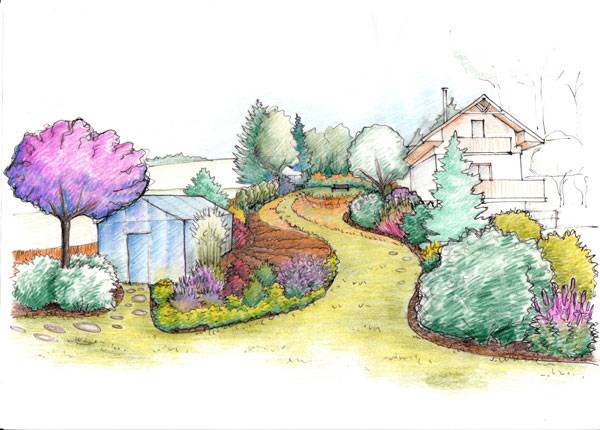 “This sketch was made for a garden proposal. It is a long narrow garden situated in the village under the mountains.  The place is very nice and picturesque, so I decided to make a hand drawing instead of a 3D model. I used a black pen for the lines and then I added colour with colouring pencils”. 7. by Agnieszka Śliwka, graduate student of Wroclaw University of Environmental and Life Sciences (the engineer of Landscape Architecture and Master of Spatial Planning), Wroclaw, Poland 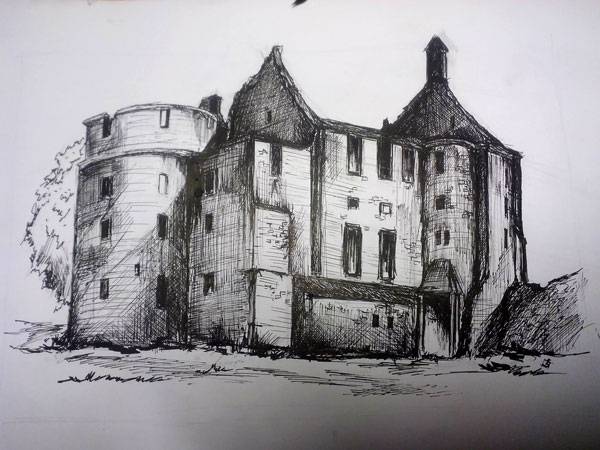 “This sketch was made as a project at the university- we had to draw a castle, so I’ve picked an old one in Poland. I used an ink and a nib. The drawing is a combination of black lines, which create light and shadows.The final result is a black&white sketch. The original size is A3”. 6. by Amaury Neto, a landscape architect/artist from São Paulo, Brazil 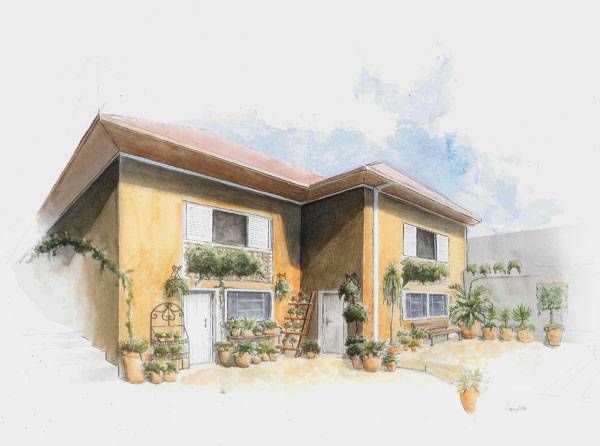 “As my client is a portrait artist, I decided to go back to traditional media to represent how the garden will look when it’s done”. 5. by Egle Garramone, Designer, Artist in Italy 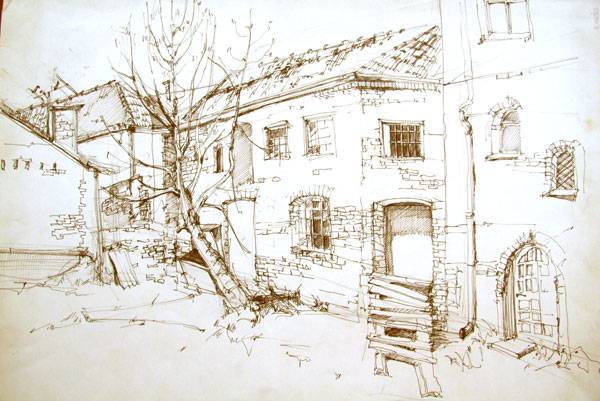 “This sketch was made during my study of landscape architecture. It’s a part of a courty yard in Kaunas(Lithuania). It was not renovated so you could see many details that show its history. I made it in 2 hours and I used only graphic pen on paper. Motivation: Free time. Style: Graphic sketch. Location: Country yard in Kaunas (Lithuania) Material used: Graphic pen on paper”.  4. by Nguyen Thi Ha, architect and living in Hanoi, Vietnam “This sketch is a student’ exercise about apartments. The materials in the building are reinforced concrete, brick, glass windows and steel truss”. 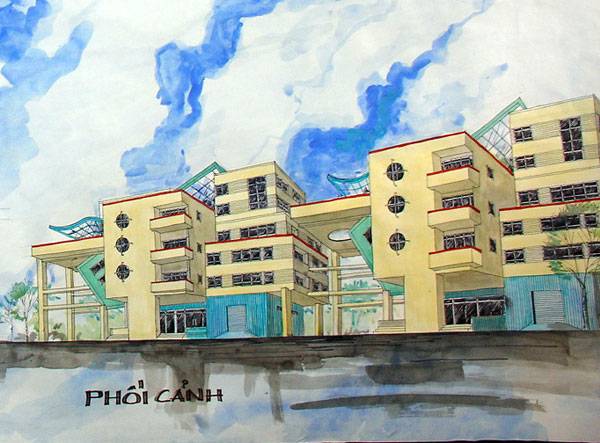 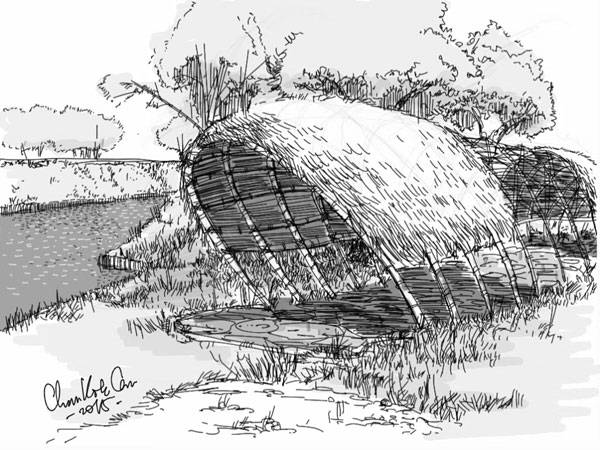 “I had this idea when I saw an empty cocoon and the ants used it as a circulation path for their activities. So I drew this for my project at Medan city in Indonesia. The building (we call it “pondoh”) is made from bamboo as the structure and “Alang-alang” as the roof. Its function is for shelter around the small island.” 2. by Jarmo Suominen, URBANIST, PROFESSOR, Service Architecture, School of Art, Design and Architecture, Department of Architecture, Aalto University, Finland – VISITING SCIENTIST, MIT Medialab, SA+P, School of, Architecture and Planning, Massachusetts Institute of Technology, Boston, USA – VISITING PROFESSOR, School of Design and Innovation, Tongji University, Shanghai, China, Executive Vice Director, Sino-Finnish Centre,Tongji ATDF, Shanghai, China. 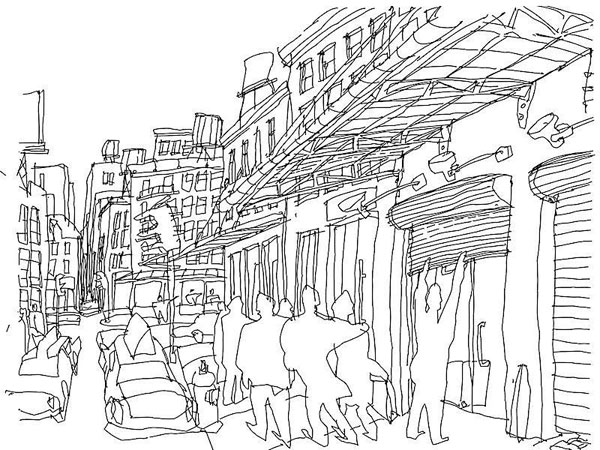 “I draw every single day, about short moments passing by, in this time it was closing time at Meatpack District NYC, shops were closing and people were packing to restaurants, warm night, friendly voices. It is a black and white pen drawing, I was using the Livescribe digital pen”. 1. by Meet.Madhu.Chavda, Currently a final year student of Architecture (Graduation), from India, Mumbai 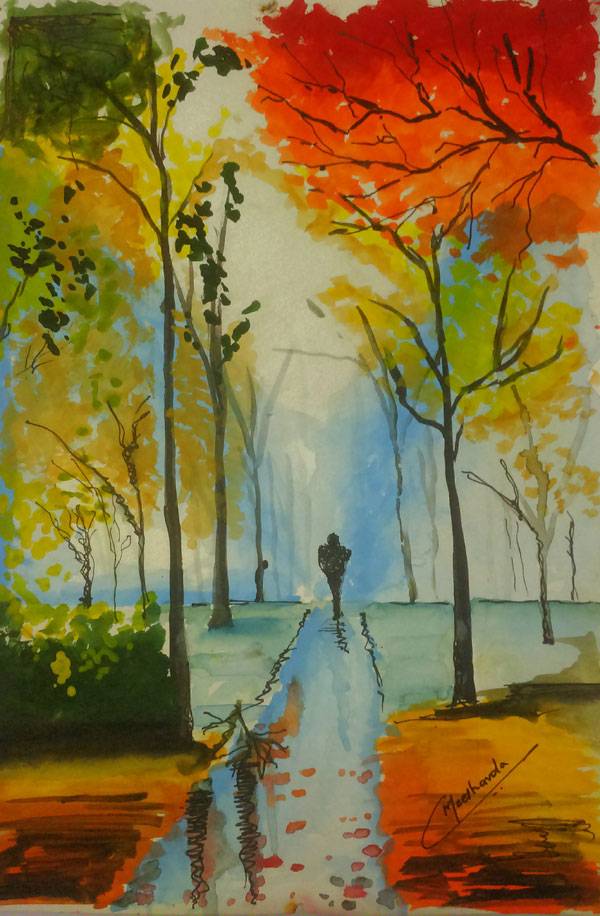 “In addition in pursuing my graduation in architecture, I have a hobby of painting. Painting in a few minutes, that has always been my challenge. That is the reason, artists in India are skillful with their hands rather than using technology. This painting was sketched in random and finished in 20 minutes. I would like to promote sketching especially to architects who are becoming techno oriented. I feel sketching would lead them to many innovative ideas. Poster watercolours, 2b pencil and black pilot pen were used”. – That’s this week’s Sketchy Saturday Top 10, congratulations to all of you who featured, you have come out on top of a very talented bunch of people. Check out the Sketchy Saturday official Facebook album and see literally 1,000′s of incredible sketches! Follow all the winning entries on our dedicated Sketchy Saturday Pinterest page. If you want to take part send your entries to us at office@landarchs.com Recommended reading: 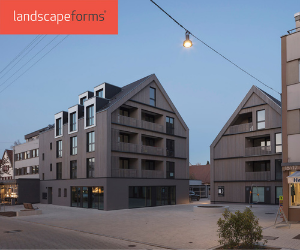