Strijp-S, by Piet Oudolf, Carve, Deltavormgroep and Har Hollands, Eindhoven, Netherlands. Eindhoven, for those who’ve never been there, may seem to be just a tranquil, sleepy town somewhere in the Netherlands. But in fact it is home to many unconventional landscape architecture projects, including the tulip chairs and the fabulous glowing bike path “Starry Night” that one of my inspiring colleagues wrote about. Also among these projects is Strijp-S, which has helped to turn the city’s image upside down: from a boring factory village to a modern design metropolis. The collaboration behind this fantastic project in southern Holland comes from the design and engineering office of Carve, landscape architect Piet Oudolf, Har Hollands (lighting design) and Deltavormgroep (designers of public space underneath the pipe street). Together, they have reinvigorated a once “forbidden city” of industrial production into a modern apartment site while respecting the area’s original factory character. 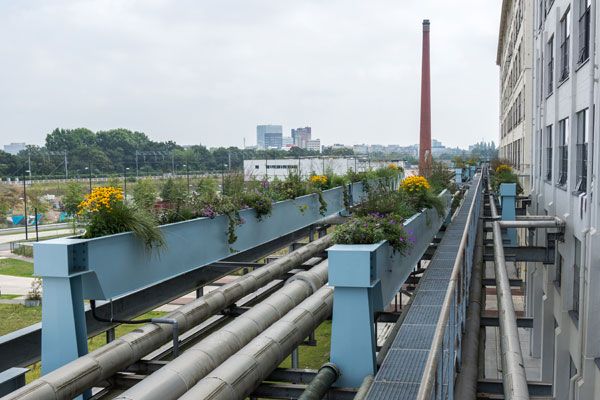 Strijp-S: Every Light Has its Shadow

What is left behind when a huge factory site is closed down? When Phillips pulled its last European factory from Eindhoven, it left behind 27 hectares of abandoned industrial complexes and a dark place that once used to be filled with the bright incandescence of new light bulbs. The move forced Eindhoven to evolve and become a grown up city that creates an alternatively bright future for its residents. Related Articles:

When Different Layers Form a Whole Even under the difficult circumstances that every former factory site carries, the outcome of the Strijp-S project is phenomenal. The clever mix of the old factory charm with new layers of plants, light-blue steel construction, and a brilliant lighting design by Har Hollands is an outstanding and harmonious collaboration that only few designers manage to achieve. 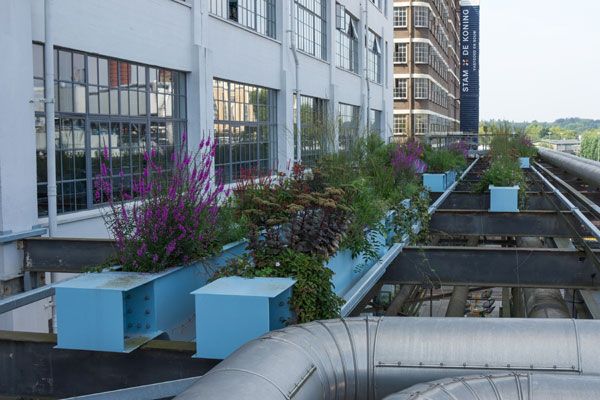 Swinging Up and Down the Pipes The most important part of Strijp-S is the “Leidingstraat” — literally “Pipe Street”. This vast network of tubes and pipes on top of the monumental steel construction used to be the means of transport of gas, liquids, and electricity to and from the factory buildings. 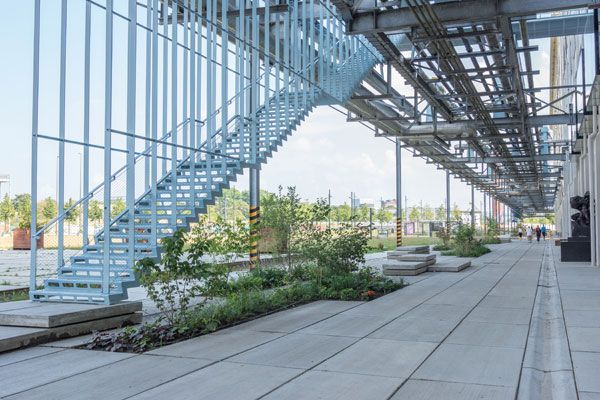 The Leidingstraat at the Hoge Rug building is the only small part of this tube network that survived the redevelopment of Strijp-S, but it remains as the carrier of technique, temporary installations, and other objects. Currently, it is home to the so-called “bird swings” that bring color and echoing children’s laughter into the site. 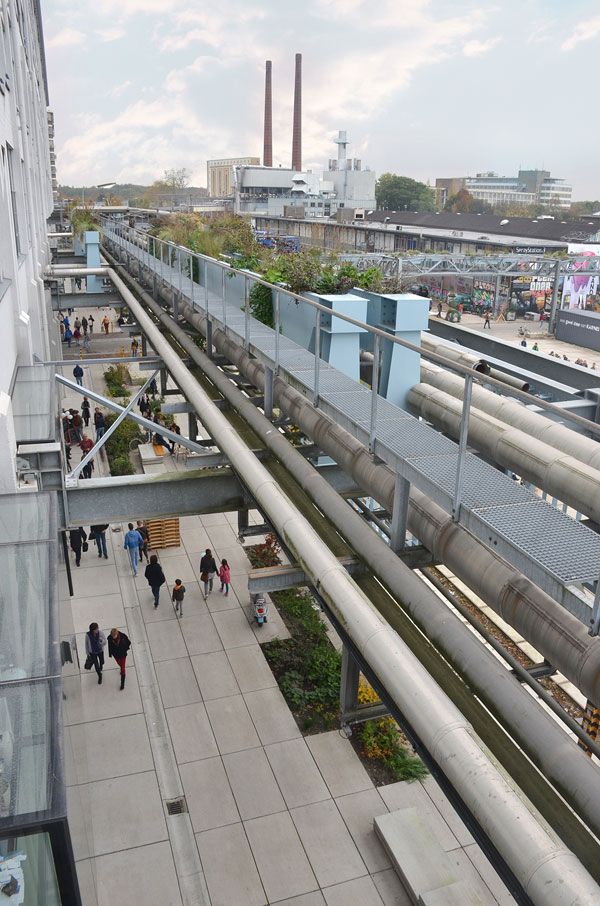 How to Create Contemporary and Appealing Factory Living All of the public space elements and materials at the Leidingstraat refer to the site’s industrial past, too. For example, large, concrete slabs emphasize the long stretch of the Leidingstraat in two different sizes as a floor cover. In strategic locations, those same slabs form seating elements, steps, and display platforms just by being stacked on top of each other. With this simple method, even the most inconspicuous elements seem to be at those random places because they once belonged to the former factory. Light blue stair elements that unfurl like net curtains down from the pipes connect the ground floor with an elevated path. The lookout platforms of this second pedestrian network enable visitors to view the immense Leidingstraat and its surroundings. The compelling lighting design literally underlines the factory charm. The pipes of Leidingstraat are lit from beneath by LED strips in various colors. By regulating the lighting of the different elements, such as the seating slabs or the vegetation, patterns in desired accents and intensities can be achieved.

Planting From the Master of Plants The non-cultivated and wild-appearing plants create a new layer on the site. For untrained eyes, it seems as if those seeds were taken there by the wind. However, it was world-renowned garden designer Piet Oudolf who created those planters and interpreted them as a leaf canopy beneath and between the robust steel pipes of the new Leidingstraat. 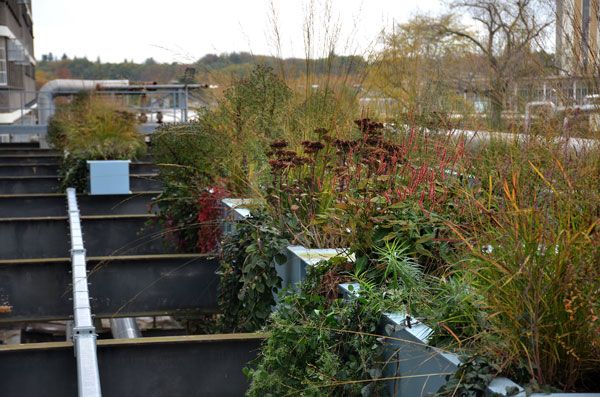 While characteristic shade plants and low shrubs grow between the concrete slabs on the ground, the planters on top of the pipes contain vegetation that hangs down like a thin curtain between the tubes and creates a different play of colors throughout the seasons. 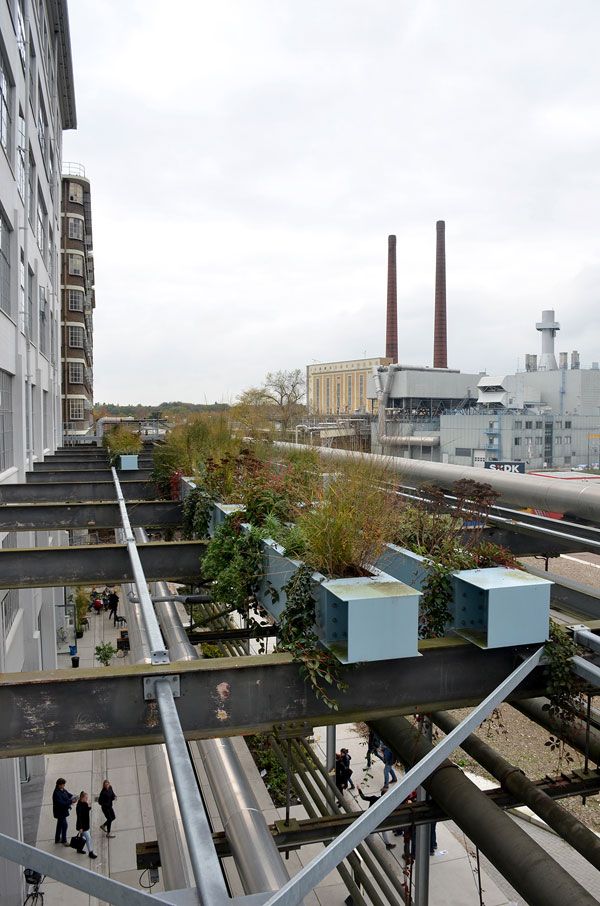 Strijp-S is the wonderful outcome of an ambitious project. This once “forbidden city” of industrial production has been transformed into a unique place to visit, work, and live in an outstanding way by keeping the original industrial charm and atmosphere. Strijp-S teaches us how to create new landscapes while respecting the history.