The Goods Line, by ASPECT Studios, in Ultimo, Sydney, NSW, Australia. Since 2009, when the iconic High Line in New York City opened its rails to the public, there has been a trend in landscape architecture that focuses on rail line design. Projects centered on former tracks have sprung up in Germany, the Netherlands, and San Francisco. Now the latest; the Goods Line, in Ultimo, Sydney, New South Wales, Australia, is making headlines for how it is changing the community it runs through. The Goods Line, a New South Wales Government initiative delivered by Sydney Harbour Foreshore Authority, is quickly becoming an important green space for this developing part of the city and has provided a vital connection for more than 80,000 tertiary students, locals, and visitors between the Devonshire Tunnel under Central Station to Chinatown and Darling Harbour. While the whole length of the site is 500 metres, the recent upgrade is the northern precinct, which is at 275 metres. 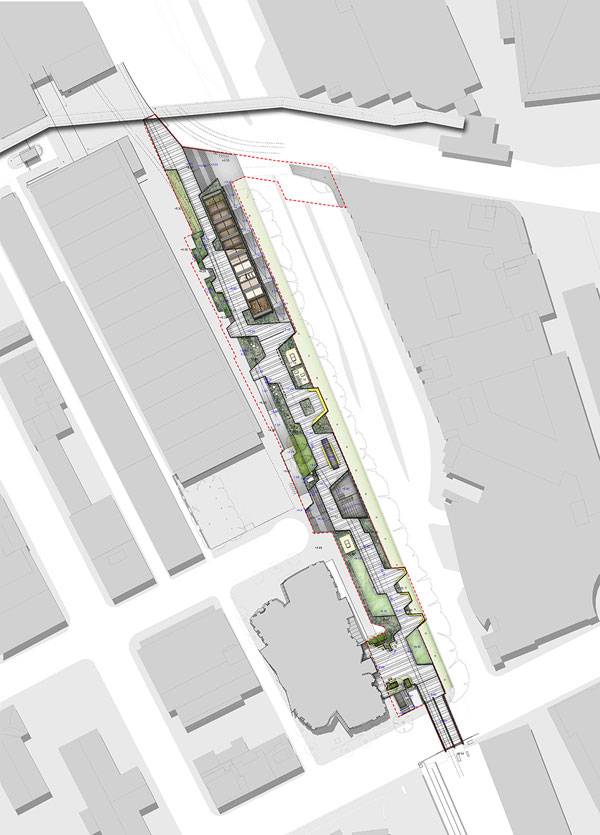 The masterplan of The Goods Line. Image courtesy of ASPECT Studios

It also connects educational and cultural institutions to Sydney’s Cultural Ribbon, which includes media institutions like UTS’s Frank Gehry-designed Dr. Chau Chak Building, the ABC, and Sydney TAFE. What used to be an isolated city space has now been transformed into what ASPECT describes as, “a human-centered place offering a range of social experiences from the individual to the collective and for all demographics.” 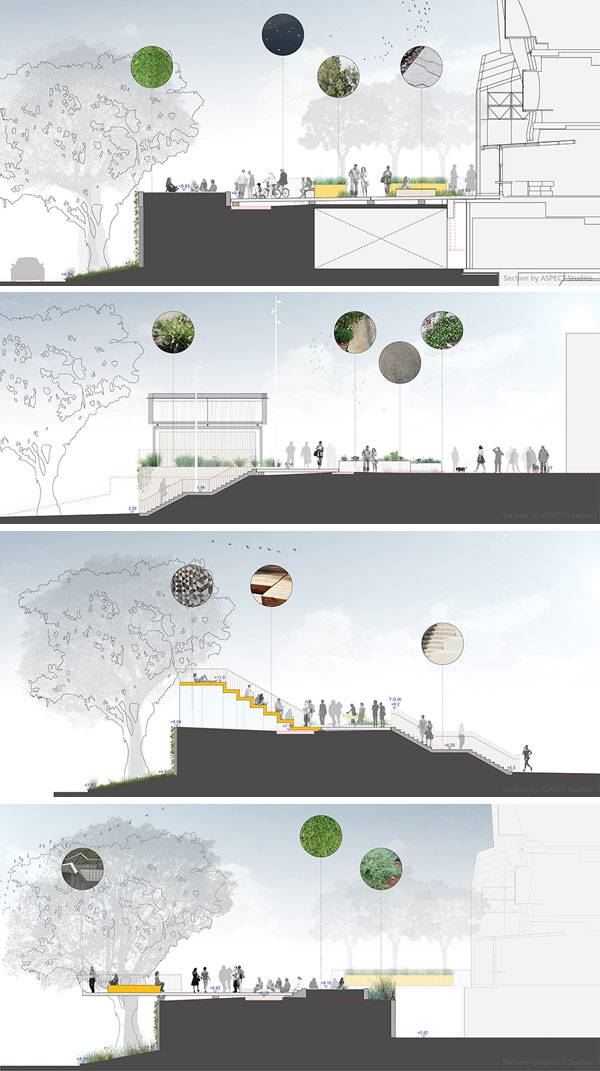 Sections through The Goods Line. Images courtesy of ASPECT Studios

To create a space that could merge the lines between a former industrial site and a new social space, the design team focused on incorporating materials that are associated with the rail infrastructure of the site’s past. By using gravel, concrete, steel, and timber they were able to maintain the history of the place while bringing it into the public realm of the modern city. They utilized both digital modeling and prefab construction to bring their design to life and to create a space that encourages gathering, playing and social interactions. 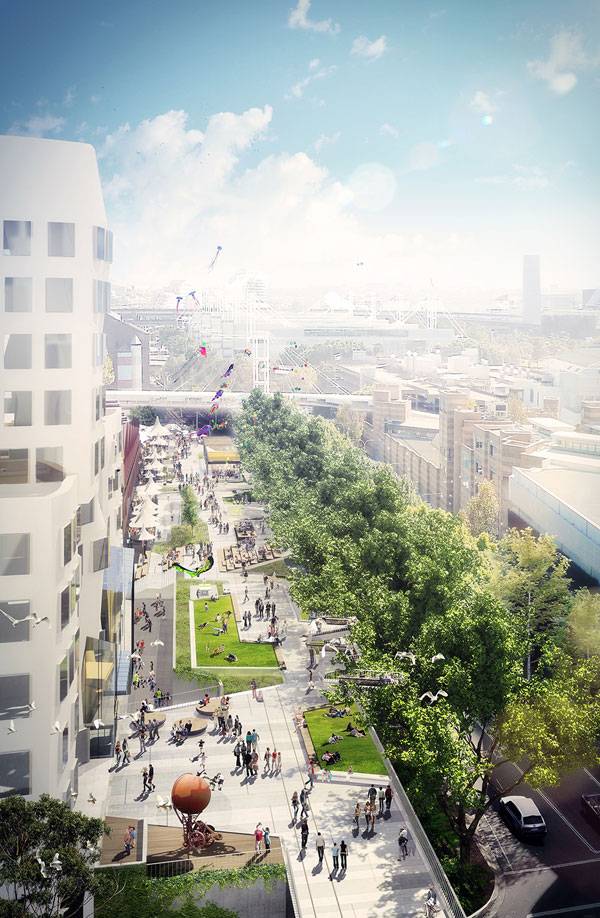 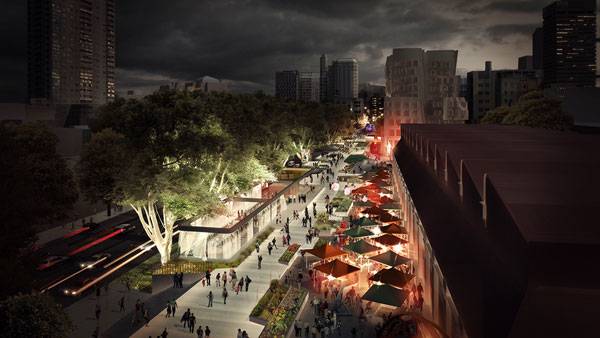 A Truly Unique Place to Visit

No detail was left unturned as each site element was designed from the ground up. Every pre-cast concrete panel, lighting element, and stool was specifically designed with this site in mind, which makes the Goods Line a truly unique space to visit. 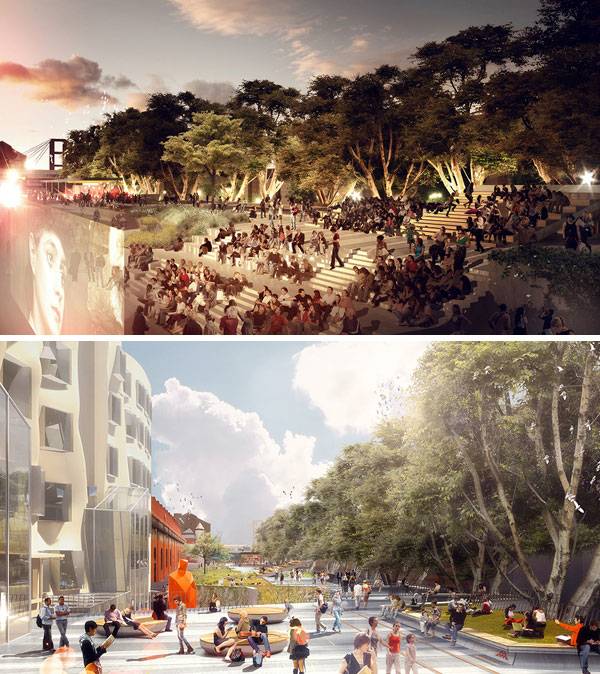 Building on a Piece of History

Originally known as the Ultimo Road underbridge, it was constructed in 1879 and is the oldest triple-girder iron bridge in Australia. As an elevated park built on an old bridge, there were certain constraints that needed to be addressed to make the site work. First, there was the issue of lead paint on the 136-year-old bridge. To address this, crews literally wrapped the entire structure in white plastic wrap designed to contain lead particles as they sandblasted off the lead paint. 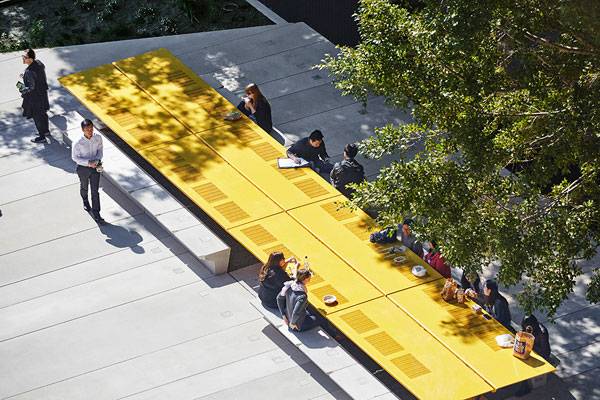 Next, there was the issue of it being a bridge four meters above street level. To address the issue of it being an elevated site, designers created a series of platforms that are used for a variety of activities. Public entertainment, recreation, festivals, and study are just a few of the activities that these platforms allow for and they help to make for a more intimate experience. 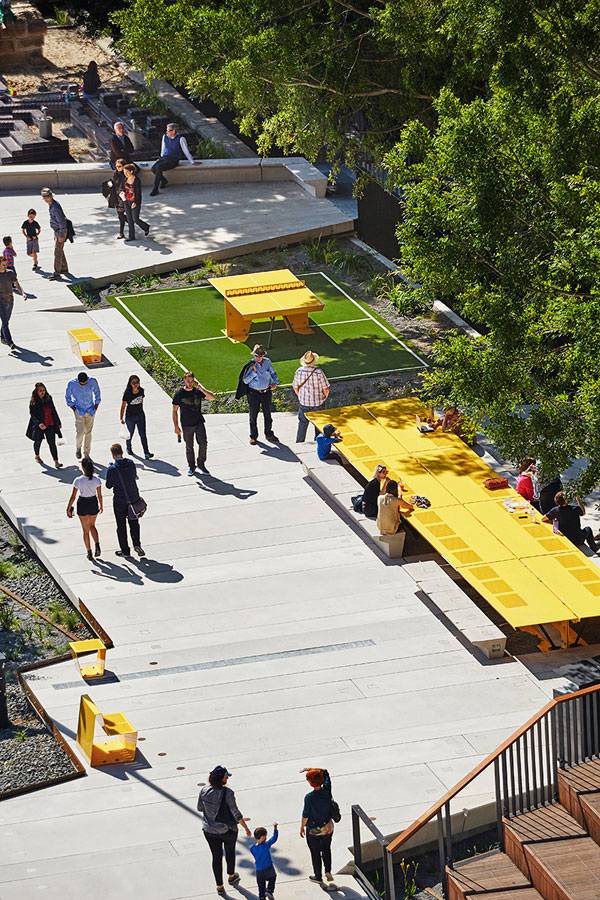 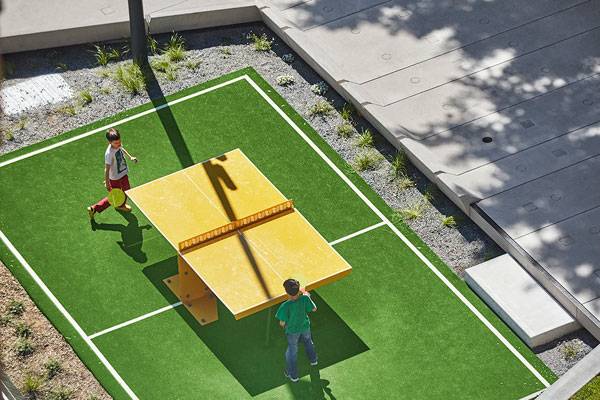 Softening the Landscape With Plants

The designers also knew that with all of the hardscapes that the site might appear stark and unwelcoming, so they incorporated rows of trees, small shrubs, and grasses to help soften the space and bring life to the new park. They also included site furnishings like table tennis, a children’s water playground, cafes, Wi-Fi enabled spaces, and a 20-seat communal table to further encourage fun and relaxation.

A Project With a Deeper Meaning

But beauty was not necessarily the main goal for the design team. “This project is going to do a lot more than just beautify the area, it is going to create a communal hub and a destination,” says Sacha Coles, lead landscape architect for ASPECT Studios.

Enhancing The Public Life of Sydney

In fact, before the design became a reality, the NSW Government had a vision for a more connected Sydney and for a place that would help transform and enhance the public life of Sydney. “What was once a conduit for trade has been reinterpreted to carry the precious cargo of a thriving neighborhood: culture, creativity and community,” says Coles. 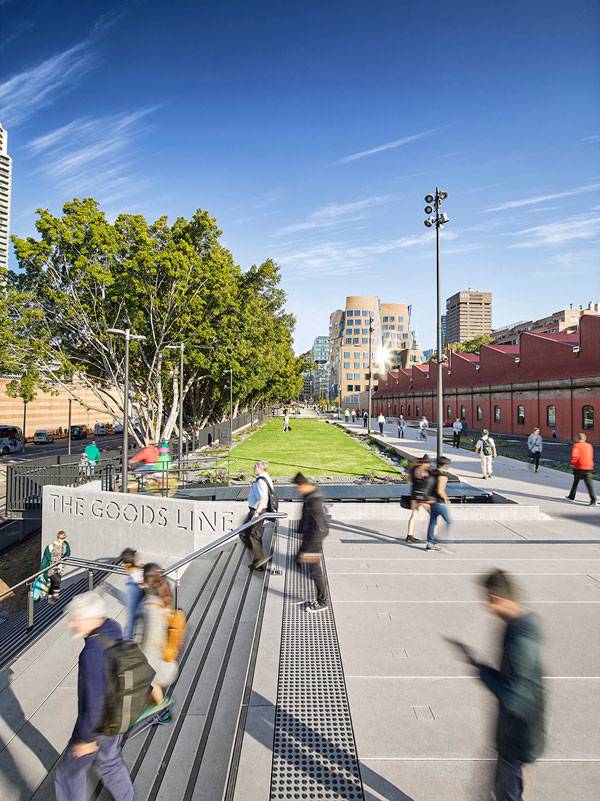 From One Succesful Project to Another

This project is an excellent example of how finding inspiration in another successful project can lead to even more success. In this case both designers and government officials looked to the High Line for inspiration, not only for aspects of the design, but for the actual project as a whole and what it brought to the surrounding community. In addition to the increased tourism, they used the example of the increase in property values that surround the High Line as a means to bring support from business owners and locals to the Goods Line project. 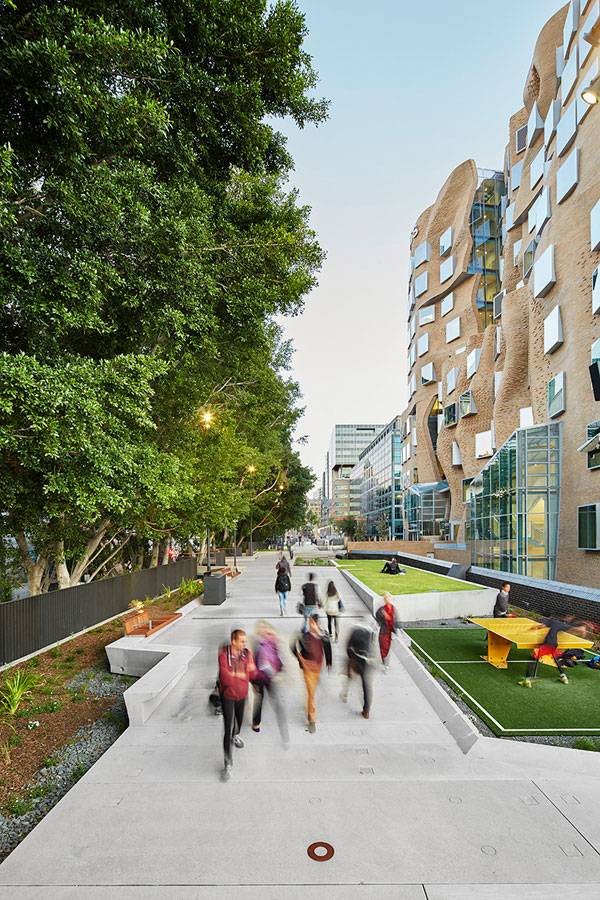 Based on their findings, this 500-meter long park was already creating a buzz in 2014, before second-phase construction was even completed. That year it won the Australia Award for Urban Design in the Policies, Programs and Concepts – Small Scale category. It’s projects like this one that focus on more than just creating a nice space and instead focus on the lasting effects they may have that are truly changing the way designs evolve. By looking at the surrounding area and how they could bring about good for the city, ASPECT and their design team were able to create a space that works for the community in more ways than simply beautification of an unused site. What others spaces can you think of that have truly brought change to a community? Let us know in the comments. >>> Go to comments 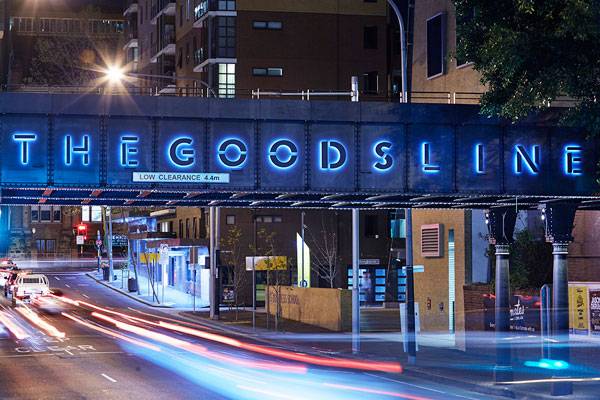 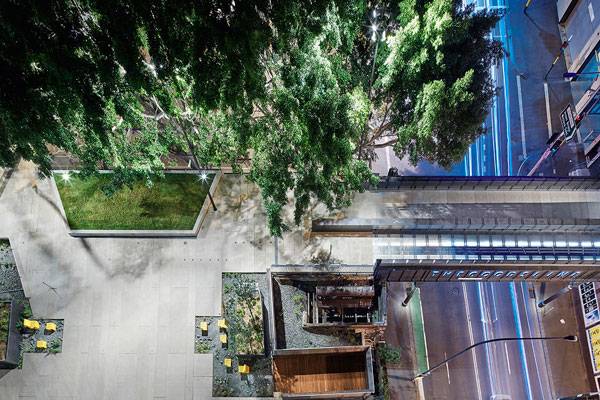