We have all seen the girdling effects that can be caused by abandoned tree stakes and ties, metal clamps, string lights, and bike locks.  (If you haven’t yet, look around.)  They are not only an eye-sore, they cause girdling and can weaken the integrity of the tree.  That is where Rob Birdsong’s mission began.  He noticed an old chain on the trunk of a Japanese Zelkova on his block in Brooklyn and decided to do something about it.  He borrowed a bolt cutter from his local hardware store and, with the help of a friend, he cut it off.  The Treedom Project was born. 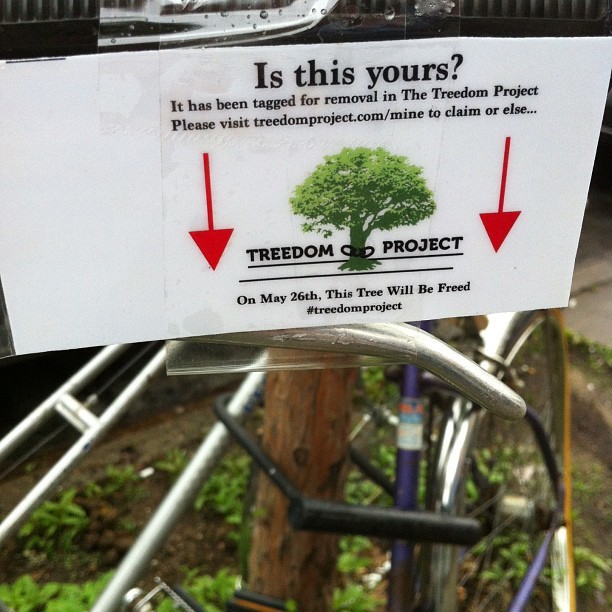 Birdsong and his small team of six arborists and carpenters set out on a quest to liberate street trees from their chains, literally, with the hope of raising awareness of the importance of protecting the urban forest.  Local community members are encouraged to report a tree, then the Treedom team places a “tag” (shown above) on the susceptible trees.

“The project has come together very organically. We went from clipping one chain and making a short video about it, to tapping the local community for their eyes and ears, to putting all of the stuff we collect on a mural-esque educational display to raise awareness about our urban forests” – Rob Birdsong

On May 26th, Rob Birdsong and his Treedom Fighters along with the horde of volunteers will hit the streets of Brooklyn carrying bolt and wire cutters to free over 50 trees from various chains, cables, straps, and metal collars… all for the sake of protecting our most valuable urban resource – street trees.

Watch the video below for the full story.