Article by Eleni Tsirintani. The Resilient Ribbon, by Turenscape + MAP architects, in City of Kazan, Tatarstan, Russia. Water is life, as cliché as that sounds. Landscape architecture projects value and include water to improve, enrich and develop a territory. However, producing a new mythology around water through which one might comprehend and design an area is a very original concept that deserves further and more detailed exploration. Turenscape and MAP architects have won first prize in the international competition for the development of the Kaban Lake System Embankments by shedding a new light on the water surfaces of the lake and treating them as a treasure that has just been found! Turenscape landscape practice is well-known for their special approach towards large scale landscape projects and their persistence and commitment to sustainability. Their project in Quzhou Luming Park is one of the numerous examples of their professional philosophy. The project is presented in the LAN review: “Quzhou Luming Park Proves that Natural Processes Offer the Most Sustainable Solutions“ by Erin Tharp.

The authority of the Republic of Tatarstan Government held the open, two-phase competition from June 18th to September 30th, 2015. The competition was an initiative of the Temporary Acting President of the Republic of Tatarstan; Rustam Minnikhanov. It tackled the full reconstruction of lake embankments in the center of Kazan, turning them into vibrant, contemporary public spaces. The Chinese-Russian consortium of Turenscape and MAP architects, a Moscow-based architectural firm, won first prize and will further develop their masterplan towards the reformation of Kaban Lake complex. 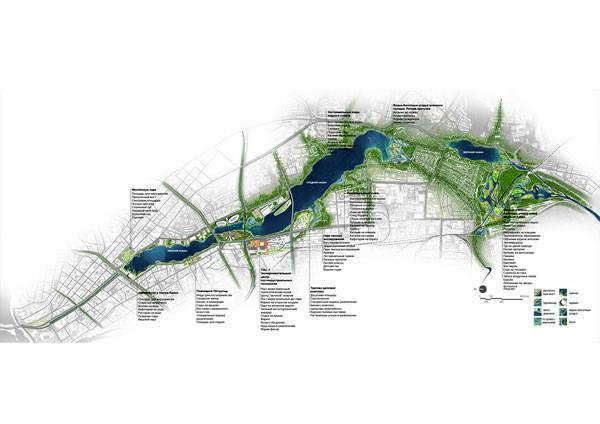 Turenscape and MAP architects’ design was selected as the winning scheme from 10 international finalists in the 2nd stage, which were selected out of 170 applications from 18 countries during the 1st stage on July 7th, 2015.

Kazan is the capital of the Republic of Tatarstan and one of the largest and most beautiful cities of Russia. The city is included to the list of UNESCO World Heritage Cities. Kaban Lake lies in the city of Kazan and it defines the city character to an extended degree. Kaban Lake actually consists of three distinct parts; lower or nearer Kaban Lake has a total surface area 56 ha, while middle or further Kaban Lake is the largest of all three parts. The width of middle Kaban Lake varies from 170m up to 580m. Upper Kaban Lake does not connect naturally with lower and middle Kaban and it is the smallest of the three with only 25 ha water surface area. All three lakes connect with water channels. The natural and cultural interaction between the city and the lake is vital. Many historical legends refer to Kazan Lake Complex including one that refers to treasures in the lakebed waiting to be discovered. This was the key element of the winning design.

Thoughts From the Design Team

The design team thought that water is not a treasure case as the myth puts it; rather it is the treasure itself. Their proposal, titled “The Resilient Ribbon”, is perceived as an elastic band that materializes the Immortal Treasure of Kazan. 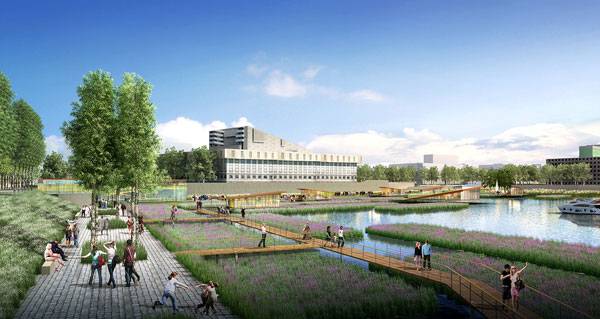 : Lower Kaban Lake Embankment with floating gardens, cafes and restaurants are connected with boardwalk on water. Image courtesy of Turenscape

A Wide Context of Intervention

The open competition regarding Kazan Lake Complex is part of a wider development process that includes all of Tatarstan. The country is changing its whole approach toward public spaces. The year 2015 was announced as the year of parks and squares in Tatarstan; year 2016 will be the year of nature reserve water areas. The program was implemented by Assistant to the President of the Republic of Tatarstan, Natalia Fishman. The project regarding Kaban Lake is scheduled to begin in 2016. 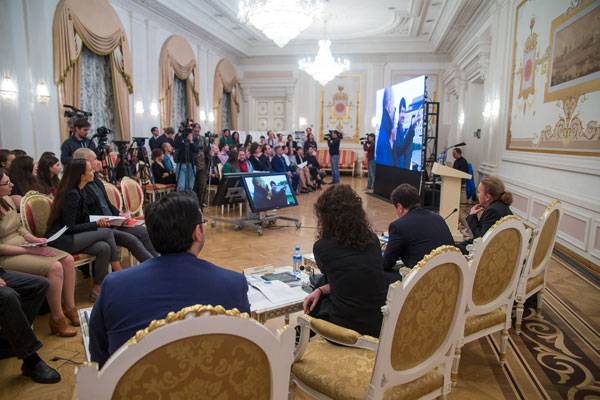 The massive scale of this intervention and the complexity of the scheme have been a truly creative challenge for the design team. The proposal consists of a green band and a blue band along the lakes, which will unite the objects of nature, culture, residential spaces and tourism along with transport networks. Within the project it is expected to create three types of landscapes, tied into bands and turning Kazan into a stable and viable city:

The ecological band will become the link for the vegetated surfaces and it articulates them through a system of water purification management. The aim is to protect and strengthen the ecological diversity. The cultural band pays tribute to local heritage by developing many functions and activities along the lakeside. It takes into account the relevant existing elements and forms a new background to unite and highlight them. 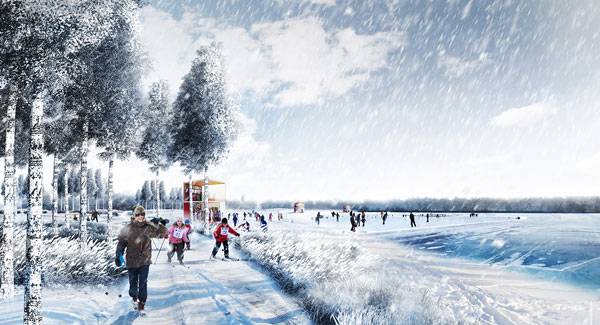 The low-speed transport band improves the existing public transport system and emphasizes the use of bicycles along the water. The new transport arrangement will facilitate access for both residents and visitors to Kaban Lake. The Master Plan includes all three Lakes of Kazan. However, as per the competition rules, lower Kazan Lake has been further developed in order to make the design concept more explicit and clear. The lower Kaban Lake Master Plan presents a number of activities and landscape qualities that unravel along the lakeside. 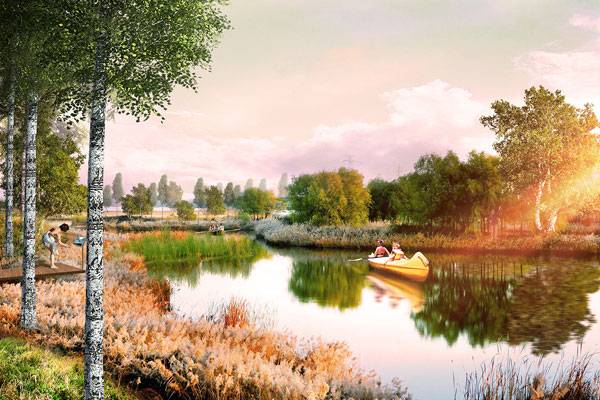 An existing fountain on the north side becomes the welcome element of the park entrance. The lawn area around the fountain is accessible through a wide, curved hangar. A ribbon that revolves around the lawn and reaches over the water surface serves as a viewing area towards the city and the lake. The northeast part of the lake is flanked by a canopy of trees that develop along rectangular water ponds.

Floating Islands and Other Points of Interest

Numerous floating islands – restaurants and cafes on platforms over the water surface – create points of interest and penetrate the boundary between land and water. Wooden platforms for walking and extended bikeways make the area accessible and link the succession of vegetated spaces. Piers for small boats accommodate the already existing sport activity, especially rowing which is very popular among the citizens of Kazan. Other interesting interventions regarding water are presented in the book “Water Urbanisms East”.

The Resilient Ribbon Project has taken something that was already there and worked on its reinvention. It handles water and all of its possibilities to create new, interesting spaces and blow a wind of change on the city of Kazan. Understanding landscape as a field of undeveloped possibilities and framing a change in the dominant perception or the established conception of a territory is without any doubt what landscape architecture is about: transformation. What do you think of this winning competition entry? Let us know in the comments below! Go to comments If you would like to keep up to date with the latest competitions from around the world, make sure you sign up for our VIP Club. Click Here!