The ICD/ITKE Research Pavilion developed by a multidisciplinary team at the Institute for Computational Design. In recent years, architects, biologists, and engineers have been thinking about the possible connection the architectural field can have with living entities, such as insects or trees. Most of the time, architects design projects based on the imitation of natural forms. This imitation takes place in a field where there haven’t been previous studies about the organism being imitated, its basic organic functions, and its interaction with the environment. This concept is called biomorphism. When you add in concepts such as biomimicry and biomimetics as theoretical foundations, the design process is focused on the understanding of the functions of the project, how its functions and structure can be solved by studying a specific organism, and, in some supported research projects, how it can be built with parametric design. WATCH: Biomimicry and Landscape Architecture The ICD/ITKE Research Pavilion was developed by a multidisciplinary team at the Institute for Computational Design, which is part of the faculty of architecture and urban planning of the University of Stuttgart. The team included architects, engineers, biologists, and paleontologists. The pavilion was part of a research project focused on demonstrating the potential of novel design, simulations, and fabrication processes in architecture, based on nature and parametric design.

From Beetles to Architecture: The Design Process

Considering the context and the functions to which the pavilion would respond, architects were concerned about the living organism that can be the foundation to develop biomimetic design. All these, along with the problems that Stuttgart’s weather can cause, forced the architects to consider the study of the Elytron, a type of hardened forewing that certain types of insects possess, including beetles. 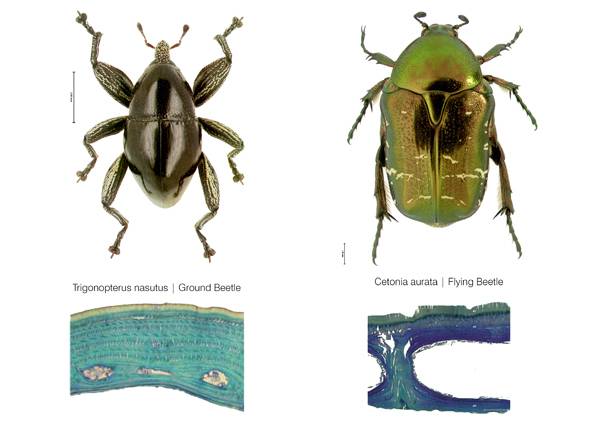 The Elytron structure can be a suitable role model for highly material-efficient construction, creating a lightweight structure. Its unique capacity and lightness relies on the geometric morphology of a double-layered system and the mechanical properties of the natural fiber composite. This structure consists of chitin fibers that create a protein matrix, allowing for locally differentiated material properties. 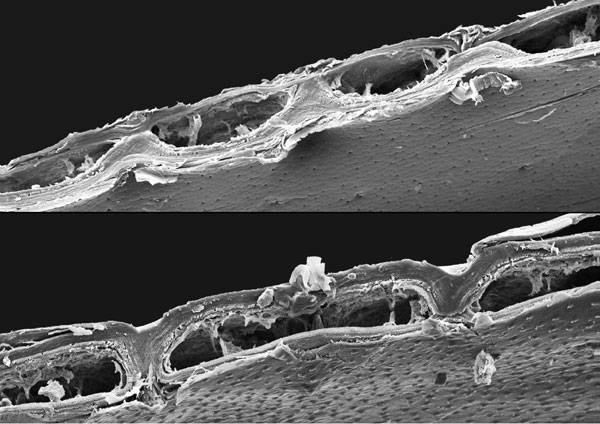 Once the case of study was defined and the architectural program of the pavilion established, the process of creating the structure began under the cooperation of the ANKA Synchrotron Radiation Facility and the Institute for Photon Science and Synchrotron Radiation at the Karlsruhe Institute of Technology (KIT). The designers used three-dimensional models of different beetle Elytra structures through micro-computed tomography. 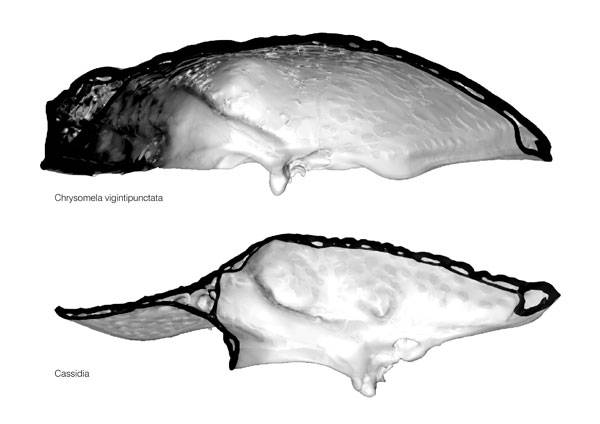 With this, the research team had the opportunity to study the complicated structures of the beetle shell. This study confirmed the presence of the double-layered structure that is connected by column-like, curved support elements — a structure called trabeculae. “The fiber layout within a trabecula merges the upper and lower shell segments with continuous fibers. The distribution and geometric articulation of the trabecula is highly differentiated throughout the beetle shell.” 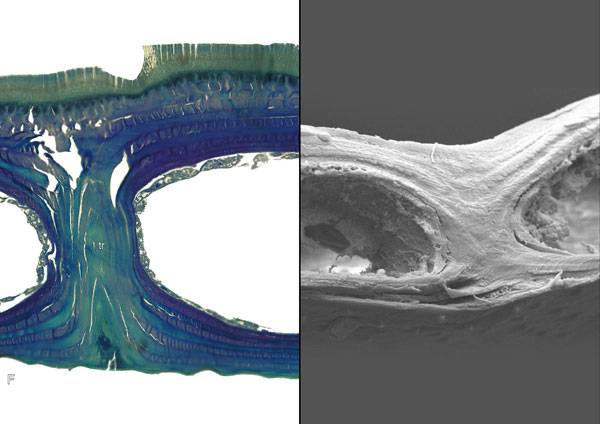 In nature, each structure has a lot of variations and, because of this, the research team studied multiple flying beetles in order to identify these variations and establish the rules for structural morphologies to be reproduced artificially. 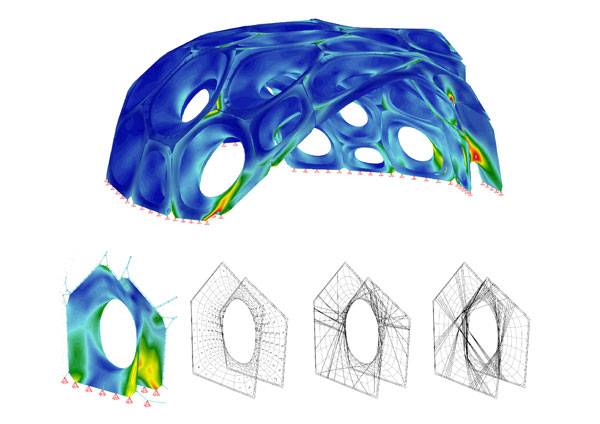 Glass and carbon fiber-reinforced polymers were chosen as construction materials for the panels, due to their unique qualities such as high strength-to-weight ratio and its potential to generate different material properties by changing its arrangement. 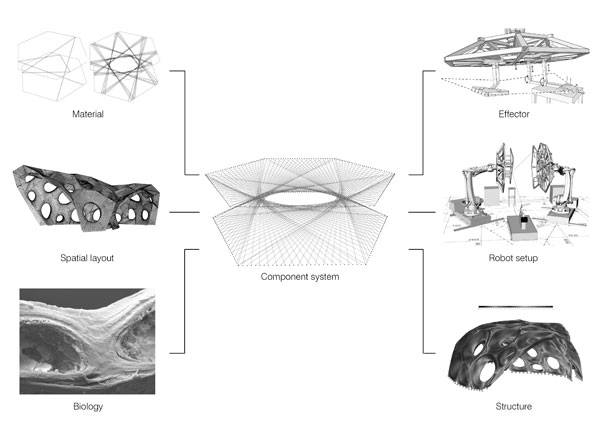 Integration of multiple process parameters into a component based construction system. Credit: © ICD/ITKE University of Stuttgart 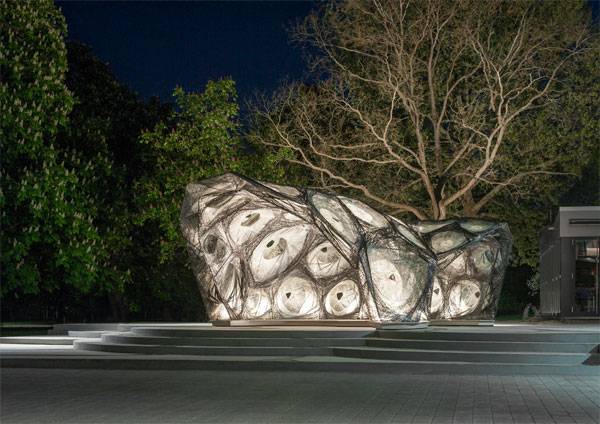 The interaction between fibers generates doubly curved surfaces from initially straight deposited fiber connections. These reciprocities among material, form, structure, and fabrication are defined through a winding syntax that becomes an integral part of the computational design tool. 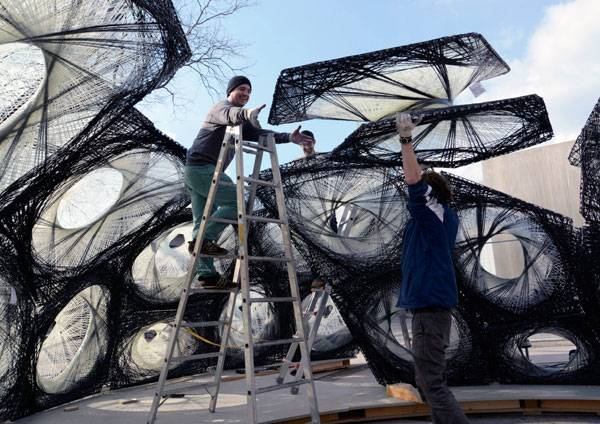 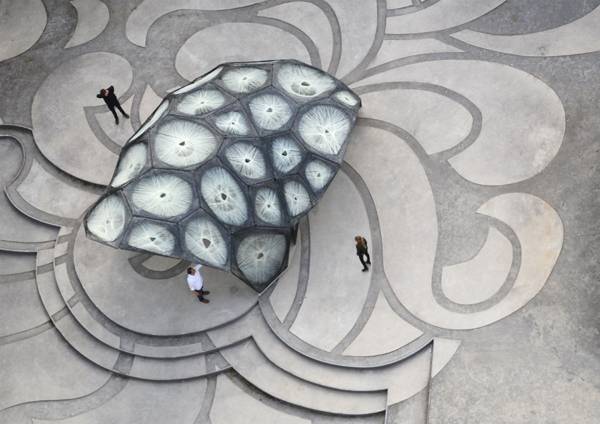 A total of 36 different panels were fabricated, each with a unique fiber layout. The biggest panel has a 2.6 meter diameter, with a weight of 24.1 kilograms. The research pavilion covers a total area of 50 square meters and a volume of 122 m³. WATCH: ICD ITKE Research Pavilion 2013-14 The final design of the research pavilion bases its form on its interaction with the public space of the university and its close location to the park. The final outcome demonstrates how the computational synthesis of biological structural rules can lead to the generation of innovative construction materials, such as fibers, allowing novel spatial structures. Recommended Reading: