Although the infrastructure is already vast there are still improvements being made in the Netherlands. It’s necessary; the latest numbers show an increase of heavily injured cyclist in recent years. Remarkably these injuries aren’t caused by collisions with cars but between cyclists. The growing numbers of cyclists are starting to over crowd cycle lanes. Partly due to the e-bike that allows elderly people to keep biking. The speeds an e-bike reaches are often underestimated. So the Netherlands need to further innovate it’s cycling infrastructure.

Amsterdam is researching to build a bicycle bridge over the river in the heart of the city to finally connect the north side of the city to it’s heart. Utrecht started to experiment with a green wave for cyclists. A sensor will detect a cyclist passing by and will guide the cyclist with a green light. When the cyclist keeps the same speed as the green light, the cyclist will have green traffic light at the next traffic light. After surveying it’s inhabitants Rotterdam introduced the weather aware traffic lights for cyclists. The light will stay green for a longer period when it’s raining or snowing, taking away one of the biggest frustrations of cyclists; waiting for the light to go green whilst getting all wet. Although most cities in other countries are far from ready to implement such innovative measures a lot is happening around the world. Many started a bicycle sharing system like Velib in Paris, Bicimad in Madrid or Ecobici in Mexico City in an attempt to solve the issue the cities aren’t very compact.

Good encouragements for people to start cycling. On LAN we could already read the example of Brighton making their streets more pedestrian and cyclist friendly and on Reuters we can read Oslo decided to ban cars from it’s center in the near future. In the past decade bicycle paths started to appear around the globe. This warehouse renovation project in Budapest was used to create a cycle path along the Danube River with a beautiful view to the other site of the city.

Janette focuses on cycling after the 8th minute in this TED talk They took on a trial and error approach using data to judge if the renovations have the desired effects. With simple, low cost changes they created new situations and had a look at the data to see the effects. The results are reason to continue and the audience’s reaction to the cycling results show there is a lot of desire to cycle.

Sao Paulo’s mayor also took bold actions to improve cycling conditions. Pioneer cyclists for years had to fight the car dominated traffic in which about one cyclist a week dies in traffic when the mayor had 40.000 parking spaces removed to create 400km of bicycle lanes in september 2014. This happened overnight without prior warning.

It’s impossible to give a complete overview of all cities; the list goes on and on. So the signs are promising. But there is still a long way to go. Unfortunately not every mayor is as progressive with improvements on the cycling infrastructure as the ones in London, New York and Sao Paulo. Former Toronto mayor Rob Ford found the car was victim of a policy focussing on public transport and cyclists. Jarvis Street got $86.000 worth of road marks to mark cycle lanes. Newly elected mayor Rob Ford had them removed at a cost of $300.000.

China, a country that is no stranger to bicycles, is changing in rapid speed. Unfortunately this seem to have a cost; in less than 25 years the usage of bicycles decreased 45%. While annually 7 million people die from air pollution. Brussels had aimed to create 19 bicycle paths to cross the city but is behind schedule, mainly because the mayor didn’t get behind it. Although a bicycle highway for London is great but one highway through a city the size of London leaves a lot of ground to cover. In the same year Boris Johnson gave a go on London bicycle highways this cycle lane was created in his city.

Cyclists need to get out of the way of cars and bother pedestrians in London, Photo Credit: Rob Koningen

Yes there is some green tarmac reserved for cyclist but it sends a wrong message. Cyclists need to get out of the way of cars, quit literally, when approaching the roundabout and have to go bother pedestrians. Only to find out the bicycle zone just ends 30 meters down the sidewalk. When taking this picture in London a local resident felt the need to express the cycle lanes are a disaster. It was the first thing he said using those exact words. And he’s right; is this how you will have to reach those highways?

When creating good bicycle paths there are a few simple ground rules to follow:

Brighton and Oslo will have great city centers to cycle in. But daily destinations aren’t necessarily in the city center. We also want to go to all those wonderful parks, gardens and plazas we see passing by on LAN and all those other daily destinations like the grocery store, work, university on our bicycle. From your front door to any of those places you should have proper space to cycle. In ‘The Wizard of Oz’ Dorothy knows exactly how to get to Emerald City; the yellow brick road will take her there. That’s how a bicycle path should be considered, one long continuous path ahead of you that will take you to your destination. If a bicycle lane doesn’t lead you anywhere, what’s the point in making it? Popular destinations such as a railway station, a shopping center or university campus a great places to connect to.

…If a bicycle lane doesn’t lead you anywhere, what’s the point in making it?…

Obviously the surface of the path should be smooth without bumps or holes to make a comfortable ride. But don’t forget that bicycles, like anything on wheels, have a particular radius that make going around a corner comfortable so a bicycle path should have a perfect flow. There should be enough space to move through. Take this award-winning example in Rotterdam. Before it got refurbished in 2012, it was an asphalt road leading cars, tram, cyclists and pedestrians into the city center along shops, bars and restaurants.

After it got refurbished, on initiative of the entrepreneurs in the street, there was still parking, cars and trams in the street. But the new material made the experience totally different. The asphalt, that created a highway feeling, was replaced by bricks and a line marking the cycling space was added. You still cycle between cars and trams but with the new material and marking it got much more comfortable. Although the cycle lane isn’t very wide, you feel you just have enough space to cycle. Here it really came down to the last centimeter.

The cycle lane is led around tram stops in a fairly tight but smooth flow, whereas cars have to wait for the tram to continue and not the other way around; the bicycle lane was made a priority. The picture taken in London clearly shows the bicycle wasn’t the highest priority when the road was renovated. And that sends a poor message.

On the Koninginneweg in Amsterdam the bicycle has priority over cars, Photo Credit: Google

In front of the traffic light red paint shows cyclists can wait for the light to go green in front of cars. Besides that, the red paint continues after the traffic light. So when a car turns right it has to cross the red paint. Together with zebra crossings this sends a totally different message than the London example. Besides that most Dutch neighborhoods can’t be crossed easily with a car but can be crossed on a bicycle. A principal explained well through this diagram from the copenhagenize site. 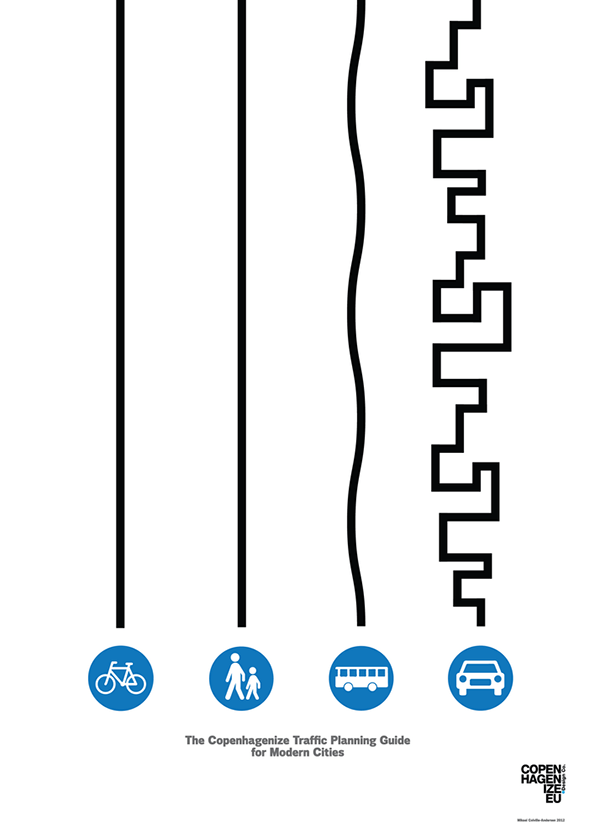 The devil is in the details

But beware; the Rotterdam project may be award winning, such cycle lanes only work in a city where people in a car respect cyclists. It doesn’t necessarily mean it will work in other cities. In many cultures the car often still is a status symbol whereas cyclists are extravagant hipsters or daredevils. The local culture is important and needs to be considered when creating bicycle infrastructure. We shouldn’t expect people in cars to be patient with cyclists right away, so cyclists need to be protected. By law but also as Te Brömmelstroet says in The Guardians article

The better the paths and lanes are the more people will go cycling, the more people in cars will get used to cyclists, the safer cycling becomes, the quicker a cultural shift takes place. Because that is what legislators actually want, whether they realize it or not.

Public demand, political support, proper laws, connections, comfort, priority. When a bicycle path is lacking one of these elements it loses significance. Landscape architecture has an important role to play in this. Whereas traffic engineers focus on traffic and in most cases still prioritize cars over anything else landscape architects often have a better understanding how to create pleasant public space. Persuading authorities to focus on proper cycle lanes is as much part of landscape architecture as sketching and designing parks. Make sure the paths connect to destinations; look outside of your project’s boundary and see to what you can connect the bicycle paths in your plan.

…Make sure the paths connect to destinations…

Prioritize them over motorized traffic; start with cycle lanes rather than car lanes during the design process and make them visually more important like the Amsterdam example. The London example shows those responsible for making bicycle paths, regardless of good will, actually don’t know what a comfortable bicycle path is. Be honest, do you know? The first thing anybody in the design process for bicycle lanes should do is to cycle through traffic their self. Cycling experience is more valuable than any design guide. Lay out those ‘yellow brick roads’. Wouldn’t it be great when every street and avenue on Manhattan has a cycle lane? What a network that would be! Every city should have such a network. Make sure everybody has a safe way to cycle from home to any destination they choose and soon enough the streets will be swarmed with cyclists and we can all leave our helmets at home. Go to comments Recommended Reading: