If you want to implement bicycle infrastucture after Dutch and Danish model you have to understand the culture around it. Do they wear a helmet while cycling, and should you? Cities around the world have started to focus their traffic policies to encourage biking in order to cope with issues such as congestion and pollution. Creating bicycle paths seems a popular promise to make by policy makers and easy to implement. But do their actions back up the words? Do they know what it implies? Is it really that easy? What makes a good bicycle path? And what role we do have as landscape architects? Make sure you watch the video “How the Dutch Bicycle Infrastructure Came About” in this article, it’s a must see. 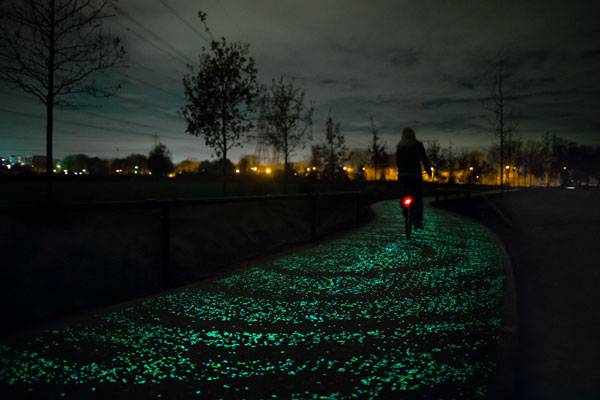 One of the most beautiful bicycle paths in the Netherlands, perhaps the world. Credit: ‘Daan Roosegaarde’ and Heijmans

It might be stating the obvious that the Netherlands is topping the charts when it comes to cycling. The European Cyclists’ Federation released its second Cycling Barometer which showed there is some serious competition from Denmark; that country, in fact, is leading the list. When it comes to cities Danish capital Copenhagen also tops the list in the Copenhagenize index, beating 3 Dutch cities in the top 5. The reason Amsterdam is not leading is because it’s allegedly lacking the will to improve infrastructure even further by not executing elaborate plans. Who’s topping the list is irrelevant, really. These lists were created to encourage other cities to step up and ‘copenhagenize’ their cities to become safe cities to cycle in. But what is safe?

Recently The Guardian posted an article in which the usage of helmets for biking was discussed, more particularly the obligation to wear one and the effects of wearing one, a discussion that is held around the world. Statistics show wearing a helmet is effective, both in preventing head injuries but unfortunately also in making biking less popular, as has happened in Australia and Madrid. Besides that, studies from the University of Bath tell us car-bicycle collisions are more likely to happen when cyclists do wear a helmet. So helmets make cycling less popular and although they prevent head injuries they don’t make situations much safer. How do we make biking safe and popular in the same time? Study results show that, in fact, more cyclists make cycling safer; the more cyclists there are in a country, the fewer casualties. 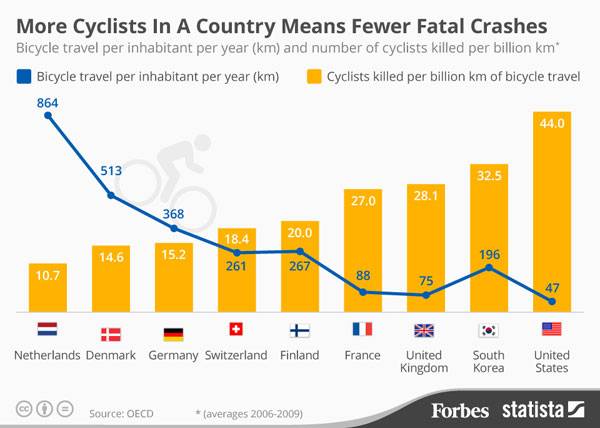 Again Denmark and the Netherlands top the list and set an example for the rest of the world. Amazingly, Dutch mobility organization BOVAG recently announced that a Dutch person, on average, bikes 1018km a year – an increase of 18% since 2010 – mainly because of the E-bike. E-bikes allow people to cycle a bit further and for elderly people to stay mobile.

Despite the increase of bicycle usage, Marco te Brömmelstroet, director of the Urban Cycling Institute of the University of Amsterdam, makes statements in The Guardian’s article that are essential. He takes for granted he doesn’t have to wear a helmet. “You just know it’s safe to get around on a bike.” Wearing a helmet is for tourists, children of over concerned parents, and people on a race bike when you ask the Dutch. In Dutch cycling culture you don’t even consider a helmet.

“…when you can simultaneously talk on the phone, eat, and carry a bag of groceries in one hand while riding your bicycle through traffic. With your friend on the back. Geen problem.”

Past summer I saw a girl cycling in the Netherlands during spring when she decided it was too warm to wear her jacket. So she took her jacket off. She didn’t stop biking to accomplish this. Even more amazing when you take into account that she was wearing a backpack in the meanwhile. She managed. With ease. Although some might pay money to see these tricks in a circus it doesn’t take years of acrobatics practice to be able to do this. 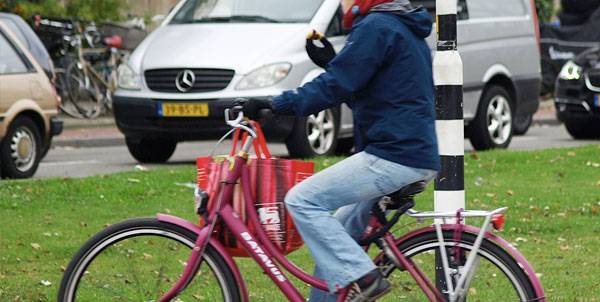 Streets on which you bike against the wind, through the rain, hail or snow, when the roads are icy or during a heath wave. Wearing sports gear, a suit, skirt, rain clothes or your regular outfit. Going to a party of which you know in which street it is but not the exact house. It doesn’t matter you’ll look for the house with a few rows of bikes in front of it. That is where you need to ring the doorbell.

…Getting your bicycle is as much part of the routine when leaving home as putting on shoes and a jacket….

And then you take it out on those streets. Every day. Throughout your life. The first big birthday present you can remember receiving is your first bicycle. You will keep on cycling as long as you are physically able. Whether you work in a factory, an office, are the prime minister or a monarch. WATCH: Cycling in the Netherlands – Introduction video

Although Dutch law, in fact, protects cyclists, most Dutch car drivers, like every Dutch, grew up riding a bike. They know what it is like to ride one, how vulnerable a cyclist is, what comfortable speeds and spaces are for a cyclist when passing. In fact, often car drivers let cyclists go first even though the car has right-of-way because they know how much more effort it takes for cyclists to stop and go. They also know how to read cyclists and how to anticipate most of the time. One reacts differently to a parent with a child on a bicycle than to a racing cyclist. It also works the other way around; cyclists know how to act around cars.

Inexperienced cyclists, often tourists, do not go unnoticed, especially in Amsterdam or Utrecht during rush hour where it feels like being on a bicycle highway. Even people on the back of a bike know the best way to sit and balance themselves in order to make the ride as smooth as possible, aiding the person that is cycling.

While working in internationally-operating Dutch offices with people from around the world, this bicycle culture is often discussed. The experience of cycling together is one of mutual learning. Some foreign colleagues still needed to learn how to ride a bicycle; the ones who know already stay hesitant for motorized vehicles. When riding together it becomes apparent how far the cycling etiquettes go in Dutch culture. Why is it so ingrained in the culture? And where did that infrastructure come from? Don’t ask Dutch people because most don’t know. It was there when most were born and people take it for granted.

The bicycle was invented and developed in the 19th century. It was meant as a substitute for transport by a horse which one couldn’t rely on when crops failed and horses couldn’t be fed properly. In the early 1900’s it became affordable for the common man and pretty soon a main means of transport. It started to dominate the streets in Europe and, in particular, the Netherlands. In 1916, cyclists had a share of 75% in traffic against 4% for the car. In 1928, the Netherlands already topped the chart with an average of 1 bicycle per 3.25 inhabitants. As found in this document

So from the start, the Netherlands embraced the bicycle. It increased people’s action radius. Factory workers, for instance, were able to work in the city center and cycle to affordable, quality housing in the periphery. The quality of life improved. In the meanwhile, the car was invented. After World War 2 ended, Europe had to recover and rebuild. Prosperity came and people were able to afford cars. Cars started to dominate the streets of cities that were not built to accommodate cars. People were not used to this, so laws protecting cyclists and etiquettes had not developed yet. Fatal accidents cost a lot of lives, in particular, those of children. People were fed up with this and protested for several years, demanding bicycle paths. In that momentum, an oil crisis hit the country. Car-free Sundays were introduced and people took to the streets, similar to what happened in smog-covered Paris recently. It reminded people what the street was without cars. WATCH: How the Dutch Bicycle Infrastructure Came About

“Build it and they will come proved true”. It proved true for both cars and bicycles. When infrastructure accommodated cars, the average traveling distance went up from 3.9 km in 1957 to 23.2 km in 1975. But when it accommodated cycling, cycling increased substantially. This shows the infrastructure provided will be used, whether it’s for the bicycle or the car. Two bicycle lanes in Tilburg and Den Haag were a starting point of an infrastructure that grew and developed. Please take notice of the word system. It was, in fact, a system change demanded by society and eventually supported by the national government.

There are some factors that work in favor of the Netherlands. The country is virtually flat and cities are compact. The Netherlands is one of the densest countries in the world yet the cities are fairly small. Amsterdam has the most inhabitants but still counts under a million, very unusual for a nation’s capital in Western Europe. Besides that, the cities are compact. A Spanish colleague once said she loved to live in Rotterdam as everything was so close and within cycling range, unlike Madrid. Whereas a Dutch friend living in San Francisco said he missed the bike. He realized though even if he had a bike and proper cycling lanes, it was still too far to cycle to the nearest grocery store.

…The most recently renovated railway stations in the Netherlands provide storage for around 5.000 bicycles…

But as mentioned before, rain, hail, snow, and icy roads are not rare conditions through which the Dutch cycle. And let’s not forget the wind. A Swiss colleague, almost a professional competition cyclist, once admitted he found it harder to bike against the Dutch wind than to cycle up a Swiss mountain. As a cyclist, you will have to fight the elements, be it wind or topography. Besides, not every Dutch person studies or works in the town where they live. That’s why railway stations are popular destinations for cyclists. Rotterdam Central Station, recently renovated, has bicycle storage for about 5200 bicycles, as does the Central Station of Delft. New stations anticipate large numbers of bicycles and even stations in historical buildings like the one in Groningen also have accommodations for a substantial amount of bicycles to be stored, whereas none of these stations have such numbers for car parking. Even though destinations are far apart, the bike is still part of the journey. In any case, whether it’s the elements, topography or great distances: Cycling just gets easier with proper cycle lanes. 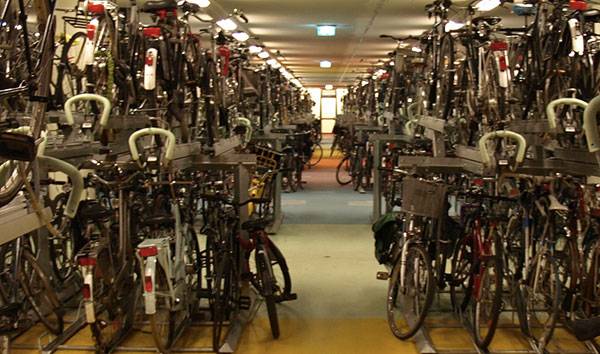 How do cities around the world incorporate bicycle infrastructure? What do you need to pay attention to when creating a proper bicycle path? Find out in the follow-up article. Go to comments Recommended Reading: