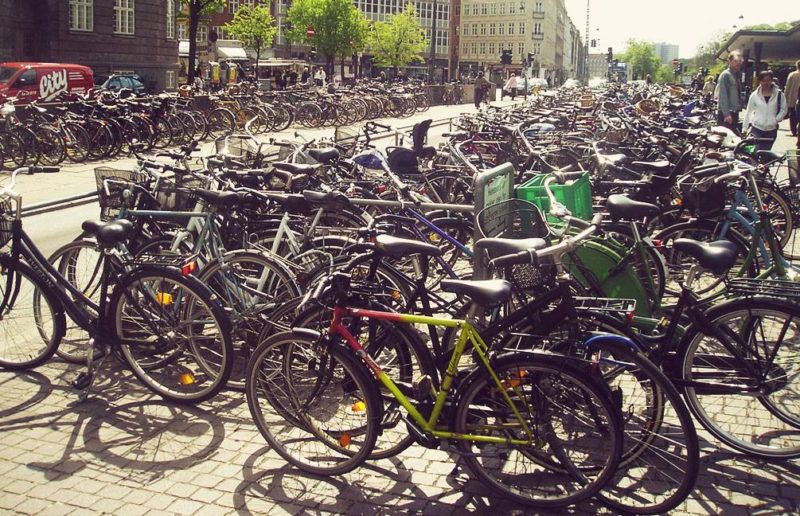 Article by Ophelia Yuting Ji – We dive in and explore the attributes that make Copenhagen in Denmark the number one bike-friendly city. Many cities claim that they are bicycle-friendly, but often times what they actually mean is they have more bicycle lanes than the average. However, a bicycle-friendly city is not merely about that. It requires high-quality bicycle lanes and facilities, convenient renting locations and services, and high safety of riding bicycles on the streets, which can create a great atmosphere of healthy life modes and pull the relationship between citizens closer. Being advanced in all these aspects, Copenhagen is no doubt one of the most outstanding models. According to the data from Cycling Embassy of Denmark, over 255,000 people in Copenhagen commute by bike every day; this is more than half the population. The more surprising part is the number of bikes is almost 5 times greater than cars there, which is something hard to imagine in any American city. The passion for riding bikes and the habit of “everyday biking” for the Danish are so amazing that they certainly deserve more attention from us. Here are three highlights we can learn from Copenhagen’s case:

Based on the report “Facts about Cycling in Denmark” by the Cycling Embassy of Denmark, there are a total of 454 km of coherent and first-level quality cycle lanes in the city. You basically can get to every corner of the city on a bicycle without worrying about running into dead ends or broken roads. Separate lanes for cars and bikes have given drivers and bike riders enough freedom and safety. Additionally, on some of the busiest streets, double lanes will be provided for bike riders to ease their tension on traffic. New bike bridges and cycle superhighways continuously emerge, such as the elevated bike bridge Cykelslangen, (See Landscape Architects Network’s former article about Cycle Snake: Can Copenhagen Become the Best Cycling City in the World? ) completed in 2014, connecting the highway and the harbor, and the first cycle superhighway, completed in 2012, connecting greater central Copenhagen with the surrounding suburban towns. 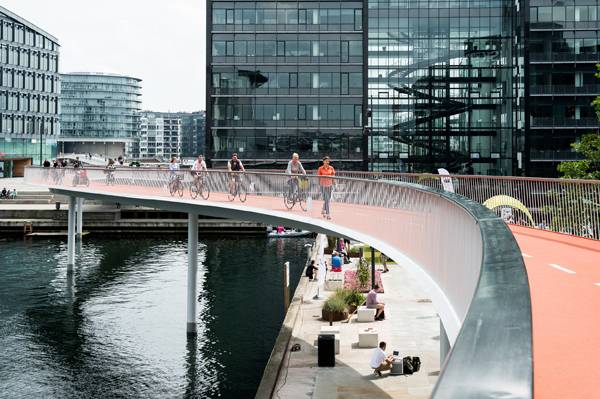 To further improve the continuity and safety of bike riding, traffic lights at intersections are designed to turn green faster for bicycles than for cars. This time difference will be customized based on the specific road condition of each intersection. Likewise, LED lights with sensors are implemented on the roads to help avoid right turn conflicts for cars and bicycles. When cyclists are crossing the intersection, the lights will start flashing to alert the vehicles. As the lights are only visible for cars through side mirrors, the cyclists would not be distracted from their regular movements, as Denmark’s bicycle ambassador Mikael Coville – Anderson told us in the video “Copenhagen Bike Paths – an Example to all Cities” WATCH >>> Copenhagen Bike Paths – An Example To All Cities

According to the Icebike.org’s research “Bike City Copenhagen: This Is The Ultimate Bicycle-Friendly City”, 4 out of 5 people living in Copenhagen have access to a bike in Copenhagen and 17% families with children have a cargo bike. As the cargo bikes are generally much more expensive than the regular ones, customized parking facilities are designed to protect them from being stolen. The facility looks like a cute pink car from the outside, but inside it is spacious to store eight cargo bikes nicely. That is not the whole picture yet. As Mikael Coville – Anderson told us, there are many bike counters in the city which can provide real-time data to track patterns of bike riders, and in the meantime, they show the “civic pride” of Copenhagen’s passion towards bike riding. In such way, citizens are encouraged to use bikes more often. Even during the freezing winter time, riders’ passion would never decrease, as on those snowy days, sweepers would continuously work to clean the street up for cyclists’ safety, regardless of any circumstance. 3. Connecting Bike Riding with Social Life Besides these basic facilities on roads, creating a bike-friendly environment and atmosphere is significant as well. An excellent example of using bike riding to build social connections is the project “Cycling Without Age”. Since many of the elderly do not have the physical ability to ride bikes anymore, this movement encourages young volunteers to ride the rickshaws to give the elderly another chance of feeling the fresh air and enjoying beautiful sceneries on the bike. Simply by registering on their website and starting to ride bicycles, an intimate relationship between young and old people is built up in this city. Undoubtedly, all these strategies would not be successful without the strong support from the government. As it says in the blog; “Gladsaxe focused on cycling – and saved millions” by Copenhagenize Design Group, the city has till now spent €24 million in traffic calming and cycle infrastructure. But all these investments have paid off from cyclists’ health savings. That being said, for the authorities, what could be more amazing than gaining valuable social and economic benefits by simply encouraging citizens to put away their cars for a little time? And for us individuals, instead of spending extra time in gyms to keep fit, why not just pick up our bikes for a little leisure on the way to work or study?