Mirage – Tinos Island, Greece – KOIS Associated Architects Talk about taking a rooftop pool to a new level: The pool at the Mirage residence doesn’t just sit on the roof; instead, it IS the roof. Even before viewing the pool, one can garner a vision of what it might look like by reading the introduction on the Kois Associated Architects website. Stelios Kois and his Grecian firm practice a style of architecture that “embodies (Kois’) taste for a purity of style which seems to combine physical and the spiritual serenity. His works testify to the coherence of this aesthetic vision, but also demonstrate his ability to reveal its spatial essence by structuring the visitor’s experience of it.” Kois describes his firm’s work as an antithesis and as diverse. And the pool at Mirage truly embraces this aesthetic.

An overview of the infinity pool – Credit: Kois Associated Architects

Seeking to provide the owners with magnificent views of their surroundings while not disturbing the integrity of the site, the team integrated the residence into a steep, south-facing, rocky plot overlooking the Aegean Sea. The stunning site offers protection from the prevailing winds and features a natural plateau, which from the beginning was identified as the optimal location for the residence, as it would minimize the impact on the landscape. The single-level structure and its pool take advantage of the panoramic views of Tinos and the Aegean Sea. 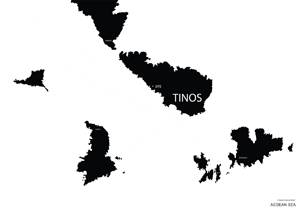 Location: According to the website, “located on the northern side of the Cyclades, Tinos is the third-largest island of the island group. Well known as the ‘Island of Madonna’, Tinos is the greatest center of pilgrimage in Greece. Within its landscape of rugged, rocky hills lay more than 40 villages, like marble fragments of an ancient statue scattered across the hills. The island is famous for its unspoiled architecture, its picturesque villages, and beautiful scenery. More than a thousand churches can be found on slopes and hilltops, a thousand or so dovecotes while masterpieces of local architecture and tens of derelict windmills are found in its gullies and valleys. The scenery is lined by thousands of kilometers of dry stone walls that make the landscape visually unique.” The Design Project architect Nikos Patsiaouras explained: “The elements that stirred our imagination most were the linear drywall constructions that articulate the landscape and the scattered shallow concrete water reservoirs used for agricultural purposes.”

The residence of the pool. Credit: Kois Associated Architects

Designed to disappear into the landscape By using locally sourced materials and construction techniques, Kois designed a residence that would effortlessly disappear into the landscape. The rimless pool, which is also the roof over the main living space, seems to vanish as well, extending into the horizon, “merging with the seascape.” When a visitor approaches, the pool is, in fact, the only visible portion of the house. But one must look closely to find it. The reflective quality of the water mirrors the rocky landscape by day and the star-filled sky by night, thus hiding it within its rugged landscape. “Some of our clients’ major concerns were visibility and privacy,” Patsiaouras said. “At first, we were concerned with the concept of invisibility. We asked ourselves, ‘How can you make a building disappear?’ Our response was to mimic elements of the landscape.” “The visual effect of the mirroring of the pool in combination with the concept of invisibility brought to mind the visual phenomenon of the mirage, from which the project was named,” he said.

Stunning views to chill out to. Credit: Kois Associated Architects

The square pool is comprised of two sections. The first is a large rectangular swimmable portion; the second, an infinity portion, is a wading area where two sinuous white loungers are situated to take full advantage of the glorious sunsets.

While breathtaking, the pool also serves a more practical purpose. Since it is the residence’s roof, it acts as an insulator and protects the interior living space from solar radiation and heat transmittance. The pool of the Mirage truly lives up to its name in all of its mystifying beauty. It is both a fascinating and gravity-defying work of art. Recommend reading: