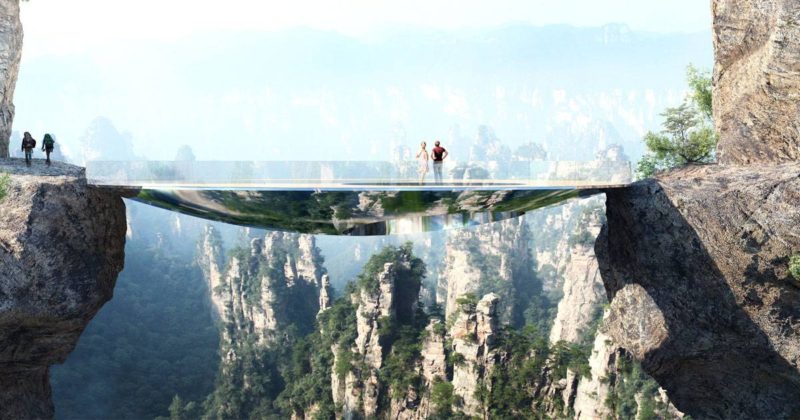 The plans come just a few months after the longest glass bridge in the world opened in another part of the World Heritage Site. The architects describe the landscape as “baroque, unique and breathtaking”. So, let’s take a closer look at this powerful project.

Form, Shape and Structure Three pavilions will be set in the park, offering incredible views to the visitors. Pavilions in the same materials are organized in three levels; from the 360° panorama on the roof – a terrace-panorama directly accessible from the path, to the café in the middle with its dedicated spaces, down to the exclusive VIP suite in the lower level – a royal guesthouse that offers a unique space of contemplation in the heart of the national park; the latter being the visitor’s only means to enjoy a unique night in the middle of this magical landscape. These incorporate space for a terrace, a cafe and a luxury guest house. “After the crowds of the day having disappeared, the lucky tenants will be able to enjoy the spectacle in perfect solitude,” the architects say. Those pavilions are connected with a very special bridge. Set down on the rocks, this step-bridge has two levels to be enjoyed. The upper one connects the two sides, while the lower one is for experiencing a moment “in the air”.

One of the bridges is an elliptical shape with a large off-centre hole through which visitors can view the rock formations below. A net across the hole can be crawled on by those without a fear of heights. One of the bridges also features a water system that creates an artificial cloud effect that sprays “rain” to form a film of water on black granite. This bridge is on two levels, with glass sides. The Contrast within the Environment “The mountains rise like nimble fingers towards the sky. The vegetation, against all odds, has managed to grow on this invincible rock. Faced with this topographic spectacle, all are left astounded.” These are the words that describe the first impression of the architect’s team. The competition involved a new route on the western part of Zhiangjiajie, including bridges and pavilions. Contrasting with a complex landscape, the footbridges are pure geometric shapes, which seem to have been placed delicately on the carved relief of the site.

Mirroring the environment, the bridge is an elliptical form with an off-centred hole that allows views down into the gap between the two rock forms. A strong net allows courageous visitors to lay down in the void. Do you see you self as one of those who would try that? For this project there were three different concepts featured. But they all feature reflective stainless steel for the structure and black stone for the flooring. Take a look!

Concept of an Illusion

The concept developed is that of illusionistic geometric development. They are the opportunities, each in its own respect, to create a physical relationship with this rock face. The company’s concept, which was a competition entry, plays on the idea of illusion and stealth; the illusion of a mirror for the first, the fear of the void for the next, and lastly the setting of an abyss for the final.

On the bridge, the “water mirror” is made of two centimetres of water on black stone which gives a completely new aspect of view to this project. The irregular set of the stones gives a feeling of a winding path in the mountains, when one is attracted by the great panorama. Every seven minutes, the water disappears and reappears through spray nozzles, creating a cloud in the middle of the mountains. This cloud progressively lands on the stones, transformed into a veneer of still water. You gotta admit, it sounds promising!

Another Jewel of China

Zhangjiajie Pour is a project by Martin Duplantier Architectes and Daqian Landscape Architects in the city of Zhangjiajie. The project is located in the Zhangjiajie National Park which is one of the most important natural wonders of the country and it is a true geological museum of China. If this has made you want to go straight to Zhangjiajie we recommend that you might prefer the period of September through October. You will enjoy a pleasant time while you enjoy a refreshing landscape and these astonishing pavilions connected with the remarkable bridge in the center of Zhangjiajie National Park. Would you be brave enough to visit such a place as a Zhangjiajie Pour? Let us know in the comment section below!