Rio Madrid by West 8. There is something special about urban revitalization projects: they not only restore the physical environment but also confidence and hope on urban dwellers. Madrid Rio, with its generous green spaces, is a great example of a refreshing project that we, city inhabitants, are so in need of in a time of uncontrolled urbanization. What once was an intrusive motorway is today an amazing six-miles-long urban park that connects people and districts, showing us that it is possible to empower people through design.

The Design Located in the heart of Madrid, in Spain, Madrid Rio comprises a total area of 80.000 m² and demanded an investment cost of 280 million Euros. The master plan was designed by West 8 in collaboration with MRIO Arquitectos, led by Ginés Garrido Colomero.

The complex embraces a total of 47 projects, being the first ones completed in spring 2007 and reaching its final completion in 2011. The interventions include several bridges, boulevards and parks that contribute to provide better link between the districts located along the Manzanares river.

The project elegantly incorporates the waterfront into the landscape to create a vibrant recreational area that attracts not only the local residents but also residents of distant districts and tourists. To see how the park is highly regarded by the users – and especially by the kids, who contribute greatly to its vivacity and warmth – check out the following video:

The Main Features of the Urban Revitalisation Project

Among the several individual projects, the most important are: Salón de Pinos (2010) Making reference to the pine trees, as the name suggests, this green corridor connects the old and the new urban areas along the river, creating an inviting vegetated area.

Puentes Cascara (2010) Cascara Bridges are designed as massive concrete domes, but the large scale is counterbalanced by the delicate mosaic work (by Spanish artist Daniel Canogar) that decorates the ceiling.

Avenida de Portugal (2007) One of the most important roads in Madrid, Portugal Avenue was relocated to a tunnel providing an underground parking and converting the area, that once was the highway, into a stunning garden to be enjoyed by the visitors. The blooming cherry trees planted in the flower-shaped cutouts on the floor create a romantic and delicate composition. The paving here is particularly stunning, where the traditional Portuguese paving technique (known as “pedra portuguesa” or “petit pavet”) was applied. Related Articles:

Arganzuela Park (2011) In this park, the main attraction is definitely the Manzanares river: the context enables the water to complement both the built and the green infrastructure. One of the footbridges found on Arganzuela Park was featured in our “Top 10 Pedestrian Bridges”. 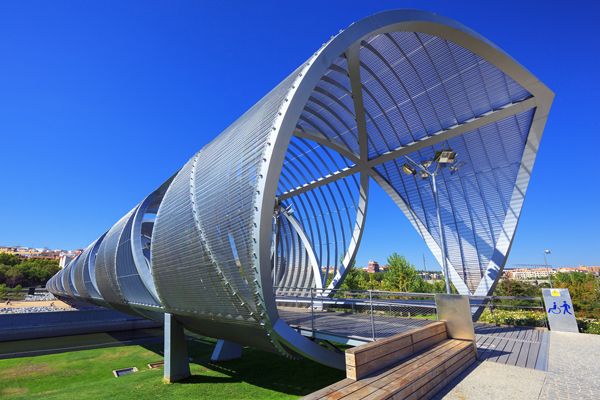 Awards Madrid Rio received many awards, including: Asprima-Sima Award for best urban development plan or urban renewal 2012 (Spain), COAM Awards to the Work of Architects 2012 (Spain), FAD Award in City and Landscape 2012 (Spain), Biennial Prize for Urban Project – XIII International Biennale of Architecture in Buenos Aires 2011 (Argentina), Finalist Dutch Design Awards 2011 (Netherlands), Golden Swing Award 2010 (Spain). Its most recent award was the Honorable Mention received during the 11th METROPOLIS World Congress, that took place in Hyderabad (India) not long ago – from 6 to 10 October, 2014. WATCH: An Overview of the award winning Madrid Rio Empowering The People Through Design As cities grow larger, public spaces lose their significance in the urban dweller’s life. However, they are an essential aspect of sustainable urbanism providing socially-inclusive environments that promote a sense of belonging to the inhabitants – hence human-friendly design is the opportunity to redesign the built environment to support higher quality of life. This is beautifully demonstrated in the example of Madrid Rio, a project full of character that managed to turn the same motorway that used to cut off districts into the best meeting point of Madrid. Recommended Reading: