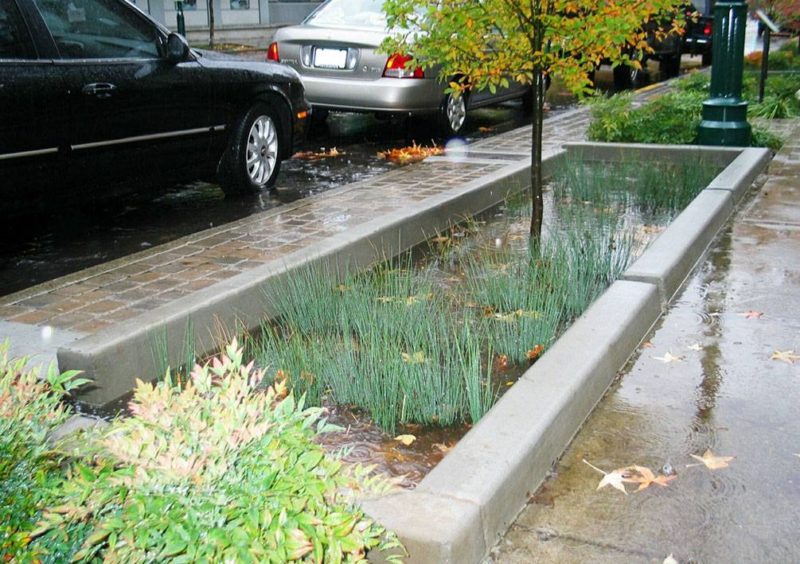 Article by Alexis Alvey  – In this article, we explore how three projects show how green infrastructure can solve our global problems. Traditionally, the management of stormwater has relied upon the use of underground pipes, pumps, and other devices used to control the direction and flow of water. However, these gray infrastructure systems require a large capital investment, costly maintenance, and can fail. Green infrastructure, on the other hand, offers a low-cost, adaptable solution that encompasses innovative design strategies used to manage stormwater and flooding while minimizing the impact of development. Strategies are diverse, and can range from permeable paving systems to green roofs to strategically planted street trees.

Below are three exemplary projects from three major cities across the United States that demonstrate how green infrastructure can be successfully incorporated into the parks, streets, and plazas where we live, work, and play.

In Houston, Texas, the Buffalo Bayou Promenade, designed by SWA Group, is a 1.2-mile stretch of riverfront that links the city center with an urban park. Although the bayous and rivers of Houston have been essential to the city’s development since its birth in 1836, the city continues to be plagued by major flooding events. 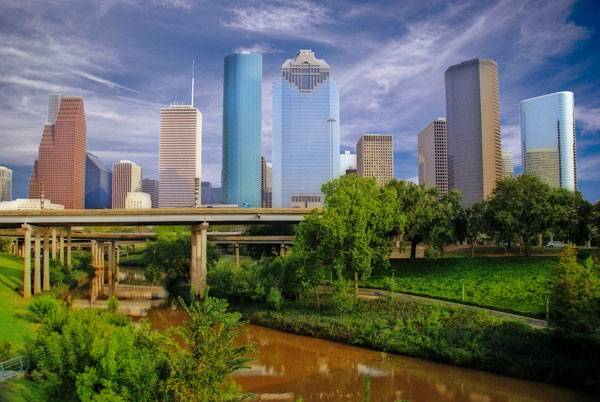 Downtown Houston, the I45 freeway and the Buffalo Bayou, taken from Sabine Street. By source.

Flood control was therefore one of the necessary goals of the project and green infrastructure was employed to combat this. Existing steep slopes were regraded and stabilized with stone-filled gabions to control bank erosion, and riverbanks were vegetated to provide maximum flood control. A total of nearly 300,000 plants were planted, with a focus on flood-adapted and native species. Swales made of recycled concrete were also installed to help absorb high volume water flows. By utilizing green infrastructure, Houston residents now have 23 additional acres of urban greenspace. Improved wildlife habitat is also an important benefit of green infrastructure, and ducks, herons, turtles, and fish have now been spotted along the bayou. 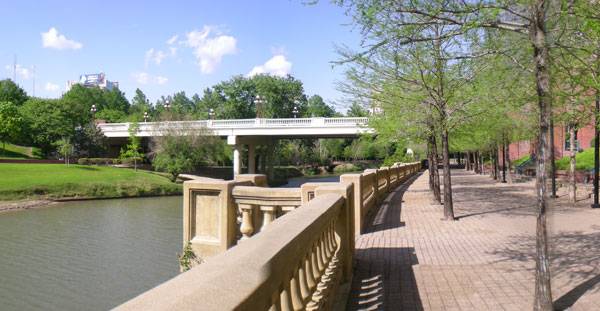 The second project is located within the Pacific Northwest climactic zone in Oregon. The city of Portland is faced with a very high annual rainfall rate, and subsequent stormwater management challenges. To combat this, the city has developed a Green Streets initiative. The SW 12th Avenue Green Street project effectively demonstrates how green infrastructure can be retro-fitted into our existing streets. Designed by the city’s Sustainable Stormwater Management Program, SW 12th Avenue now boasts a series of stormwater planters that capture and cleanse street runoff. Before the project was implemented, stormwater had been siphoned into a system that fed directly into the Willamette River. 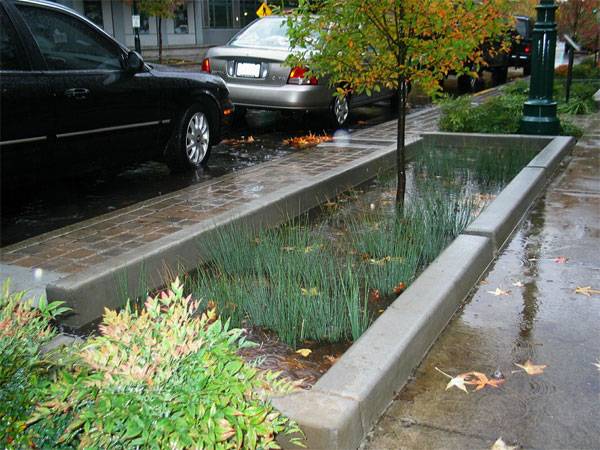 Reduce the Runoff Intensity by at Least 70 Percent

Now, strategically placed curb cuts and small groves of native rush and Black Tupelo trees allow street runoff to enter planters, be cleansed, and infiltrate soil or head downhill to the next planter. Pedestrian circulation and on-street parking are still maintained in the design, which is now estimated to reduce the runoff intensity of a 25-year storm event by at least 70 percent. 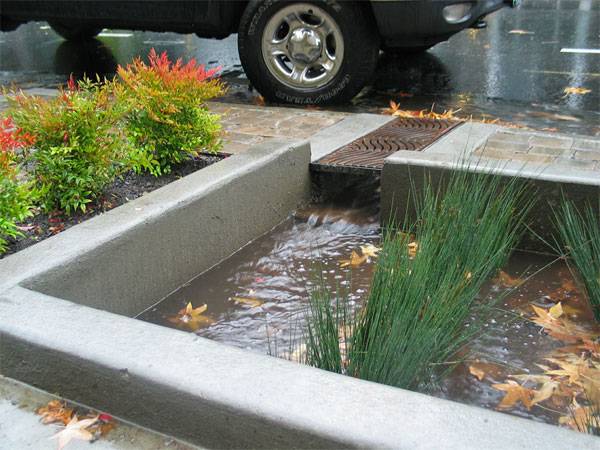 The last project is from Washington DC, which has also started a Green Streets initiative. The United States capitol is situated in the delta of the Potomac River, the Anacostia River, and the Rock Creek Watershed. Green infrastructure projects are designed to intercept stormwater before it reaches any of these waterbodies. 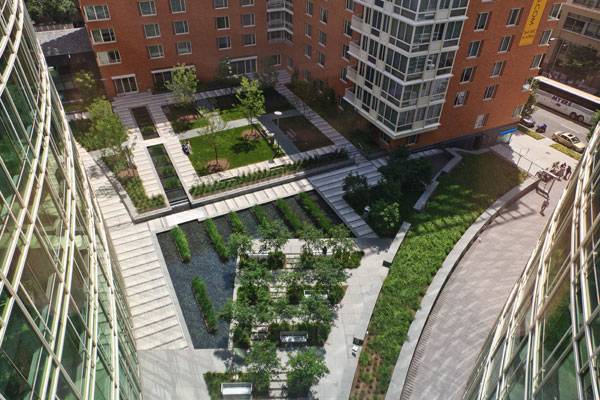 The Avenue, designed by Sasaki Associates, Inc., is a great example of what can be done in a small plaza to address stormwater issues. Located at 2200 Pennsylvania Avenue, the Avenue is a dynamic, mixed-use development, located only six blocks from the White House. All rainwater that falls within the area is collected and then drained through a stormwater filter to a 7,500-gallon cistern that is located in a parking garage below the courtyard. The stored water is then used to provide irrigation for the plaza plantings throughout the growing season. 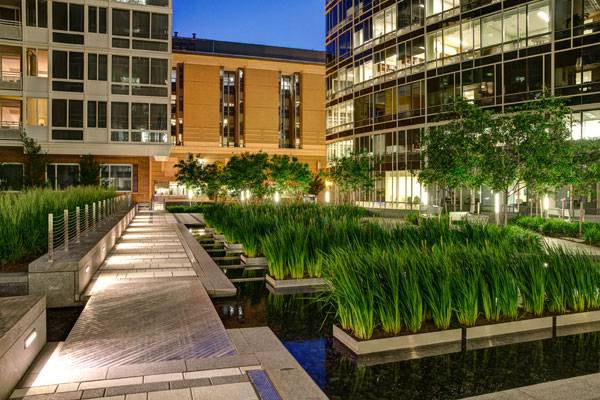 The project also contains 8,000 square feet of green roof, which filters water before it is collected by the cistern. The performance of this project has been assessed, and it is estimated to prevent 76,000 gallons of annual stormwater runoff from entering Washington DC’s aging combined sewer system. 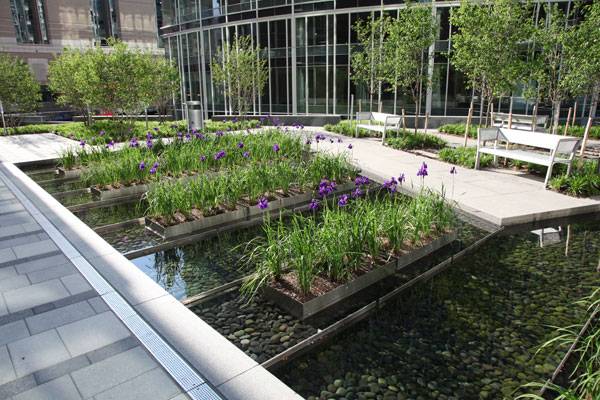 Landscape architects have the opportunity to implement green infrastructure in many different project types across the globe. All cities are connected to a greater watershed, and by focusing on this low-impact, sustainable design approach, we can re-establish the vital connection we have to our land and waterbodies while preserving them for future generations.