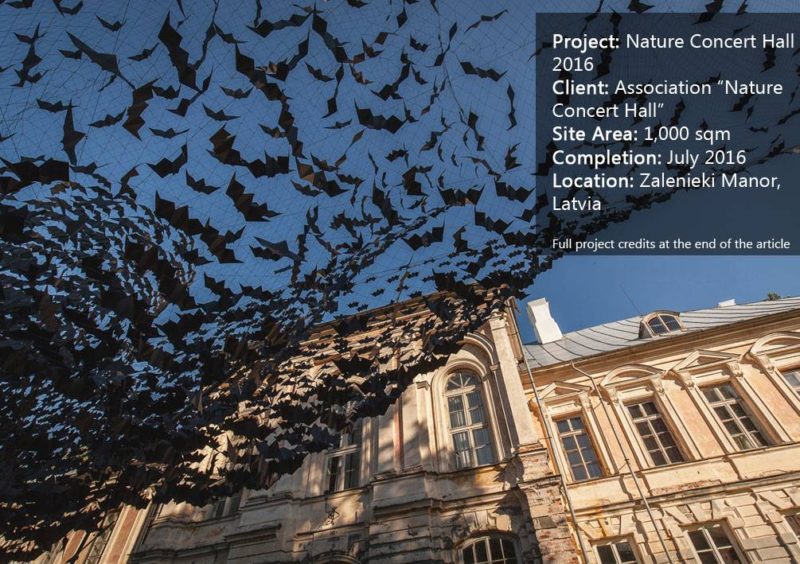 Article by Mai Nguyen – Art Installation at the Nature Concert Hall 2016, by DJA (Didzis Jaunzems Architecture), in Zalenieki Manor, Latvia Landscape architecture in general is the comprehensive arrangement of different components to create a better exterior space experience. The scale of landscape design can vary from a regional forest to a simple garden or art installation. With the development of new materials, the design of art installations has achieved tremendous improvement and been gradually recognized worldwide. In general, the art installation, especially in landscape design, is usually aimed at creating an icon, to promote the identity of its surroundings. Just completed in July 2016, the Nature Concert Hall in Latvia by the young and ambitious architects of DJA (Didiz Jaunzems Architecture) is not an exception to this trend. 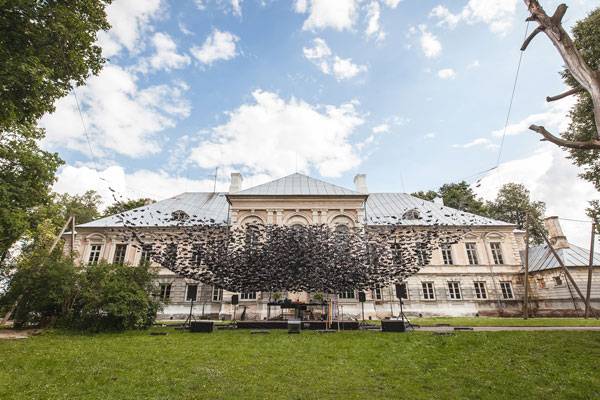 The Nature Concert Hall is made up of 10,000 paper bats comprising a unified component. The main inspiration for the whole installation might be the unpredictable shapes of nature. From the far distance, this piece of art implies an image of a flock of bats converging on the main stage in the middle. Indeed, the original design intent is to generate dynamic geometries, imitating natural features. 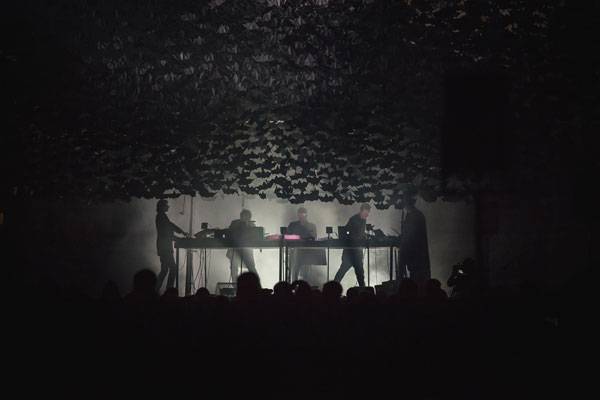 First and foremost, one notices that the concert hall is purposely placed in the middle of the existing buildings behind it. This helps make the project part of the overall site instead of being an alien insert. Indeed, the main frame also promotes the view toward existing buildings. Hence, this new member has blended itself into the surroundings, reserving the existing visual elements and adding more value to the overall picture. 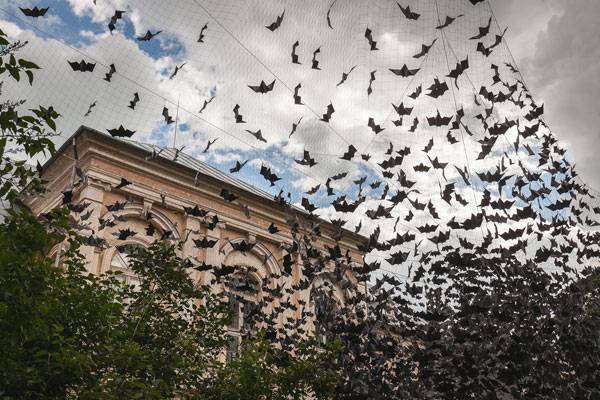 In considering the flock of bats, it is noticeable that its density changes from the edge toward the center, implying an image of flying and levitation; using thin wire and a natural-looking wooden column helps to camouflage most of the artificial elements, attracting more attention to the flock. This flock is intended to serve as a screen for video and light projections. Obviously, the abnormal pattern of this special screen would create an interesting lighting effect for the shows. 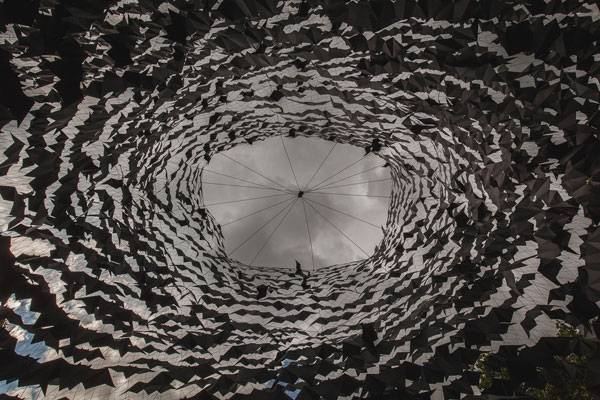 As mentioned before, one typical purpose of art installation is to promote the identity and iconic nature of the local site. Given that the main character of Luznava and Zalenieki manors, Lativa, is long-eared bat, Plecotus Autirus, the project managed to amplify this icon by introducing thousands of this species at once. 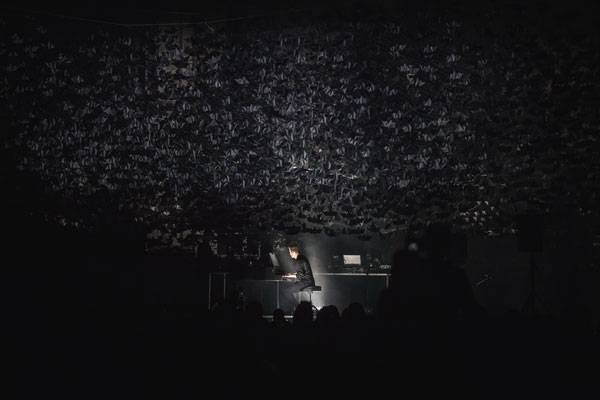 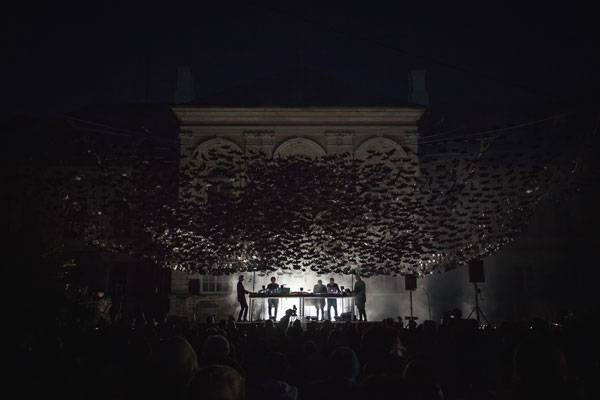 The Dark World of the Bat

The architects note that the effect from light projections and composed music contributes to the interpretation of the dark world of the bat. To outsiders, this idea is bizarre yet stunning; meanwhile, with the local residents, this idea might encourage a familiar yet exciting feeling. 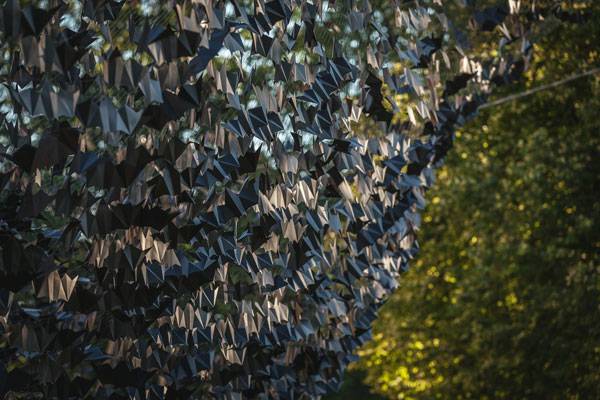 In fact, it is not a very easy task to promote the identity of a place, especially in this globalization context in which almost anything can be found anywhere. The use of local images is usually expected to be able to create a familiar feeling, yet stand out from other projects. Therefore, a thoughtful understanding of local context is crucial in the mission of promoting a site’s identity. In that sense, the use of a simplified image of a local animal in an innovative design by DJA can be considered a successful idea. 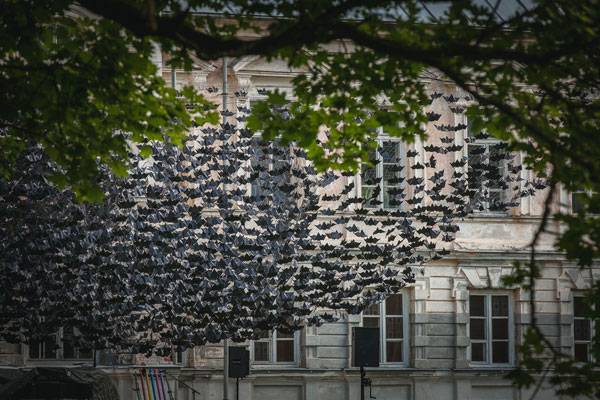 Two-Way Influence of Form and Function

One important role of landscape design is to enhance the external space experience for users. The usual spaces for landscape design are public/community places. Therefore, the role of landscape design in the development of community is undeniable. Similarly, the expectation for an art installation in a landscape design is different from one in an exhibition. In other words, the added value of a functional art installation is generally preferable. In the case of Nature Concert Hall, it is a place for multimedia nature-educational annual events integrating science, dramaturgy, music, and art, which all can be considered as cultural activities. In that sense, it is true to state that this piece of art is placed in an appropriate context. Its iconic character makes it part of the events. 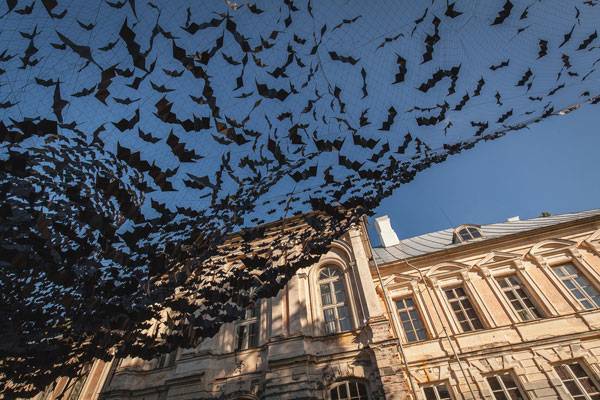 A Simple Yet Elegant Design

In short, the design of Nature Concert Hall by DJA is not arduous with complicated combination. In fact, it is a simple yet elegant design focusing on the essential identity of the site. However, being simple is not the same as being easy. In fact, the project expresses a careful understanding of local context and successfully conveys it into a functional design for community. This character evokes an architectural trend of the 1960s, usually remembered by the statement from Architect Ludwig Mies van der Rohe — “less is more”. With the development of new material and the blooming of contemporary art recently, should this become a new trend of landscape design in the near future? 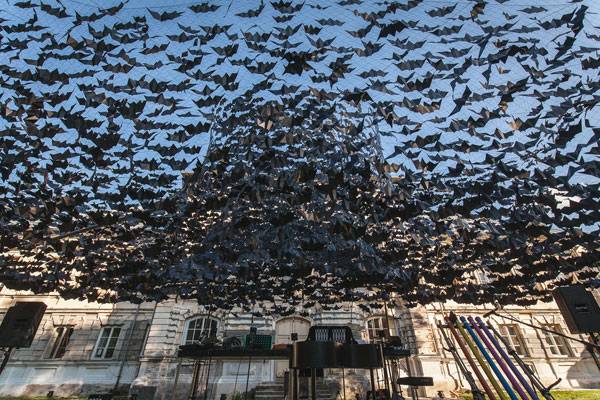