Article by Irene Crowo Nielsen – Constitution Garden, by SdARCH Trivelli&Associati, in Kuwait Every country has its history and its past. Some have struggled a little more than others have. Some have fallen along the road and some have risen like superheroes. Common for all countries is that they are the way they are today because of their people and their actions. Kuwait has had its tough times, but shows now, the path towards democracy. In 2012 Al Amiri Diwan, the government agency, decided to build a garden inside Al Shaheed Park in Kuwait City to celebrate the 50th anniversary of the Constitution of Kuwait and to erect a monument, a titanium brass sculpture, that shows the path to democracy of the State of Kuwait.

With Kuwait being a country in the Middle East, it has a hot and arid climate. Designing and building a park is therefore complex. The differences in temperatures between winter and summer are huge, it can get up to 50 degrees Celsius, and sandstorms are frequent. Usually one does not sit, walk or stop because of the heat and the direct sun radiation. SdARCH Trivelli&Associati was hired to design this important Constitution Garden. How did they manage the complex task of designing with democracy, an arid climate, and landscape architecture? The Path Towards Democracy

The Constitution Garden of Kuwait tells a story about the path to democracy and it is designed according to Islamic tradition, as a reflection of paradise; a place to stay and where time passes. 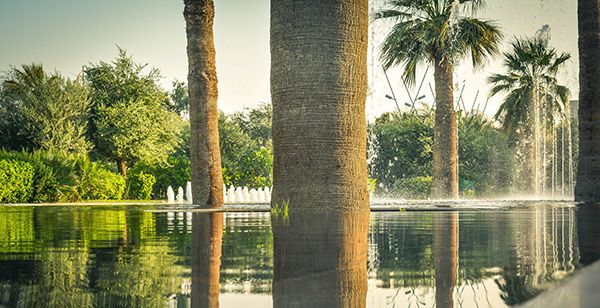 The old part of the garden relates to the time before the constitution. It is represented by a messy landscape. The garden is designed to be arid and furious, creating a feeling where instability and insecurity would reign. The paths are not ordered and quite confusing, and the landscape is rough. Only trees and shrubs are survivors in this tough arid environment without water.

Entering the “New Age” is a calming experience; the landscape is organized, prosperous, and orderly. You feel safe. The pathways are straight and clear cut and there are different plants with adequate water, coming from a reverse osmosis treatment system. 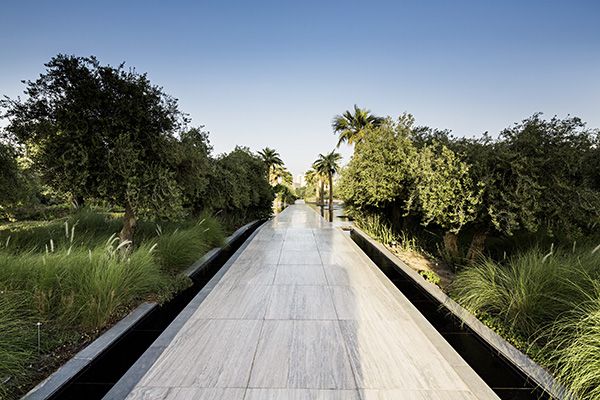 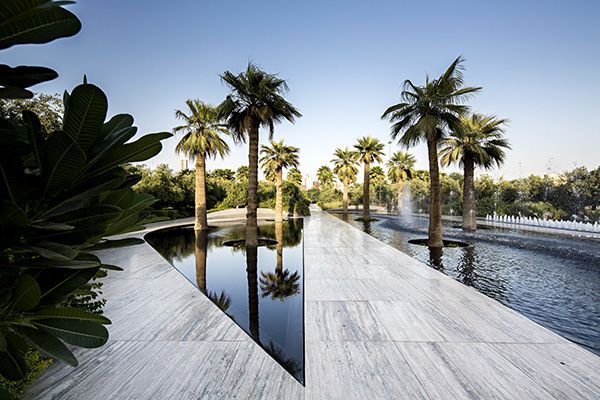 The garden shows great symbolism to the Constitution. It forms an oasis made up of 183 olive and palm trees that each represent the individual articles of the Constitution. There are also a great variety of shrubs, in different sizes and colors, representing the different ethnic groups that together make up the people of Kuwait. 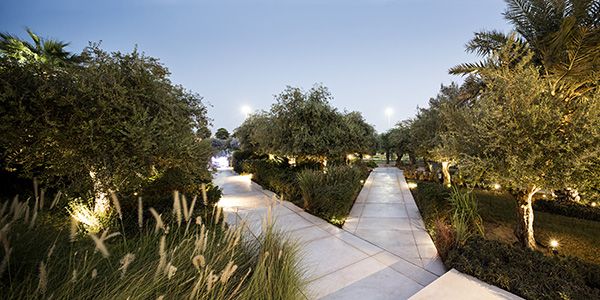 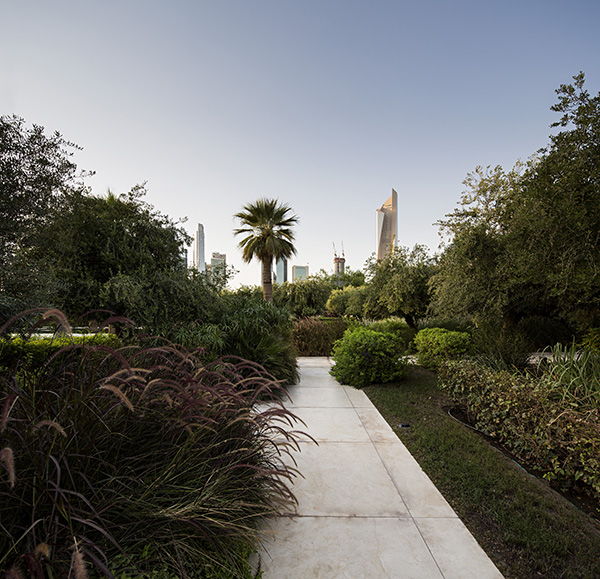 There is a fountain, centrally placed, to represent the precious treasure of being protected and the water’s surface reflects the clear sky of Kuwait. It is a garden full of symbols and meanings.

Designing with Vegetation and Water to Deal with an Arid Climate 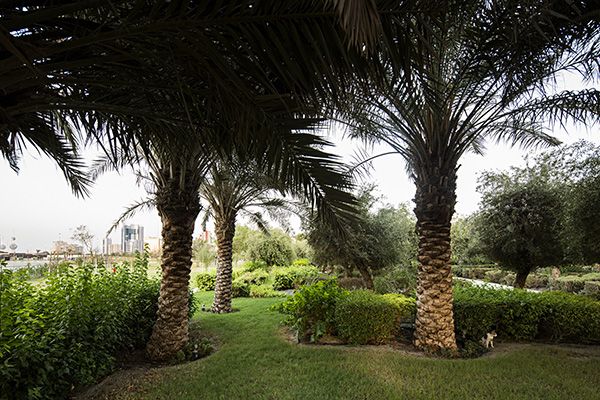 Trees and shrubs in “New Age” side of the garden. Photo Credit: Nelson Garrido©

The garden contains a variety of shrubs, grasses and flowering succulents. Euphorbias, Bougainvillea, Plumeria, Lantana and Carisse are planted in mixed patterns with grasses, ground cover and palmettos.

To improve the comfortable feeling of the garden, seawater filtered with a reverse osmosis system was used. It is a high-technology water treatment which produces clear water for a series of jets of vaporized water spread among the shrubs and also feeding the large fountain. 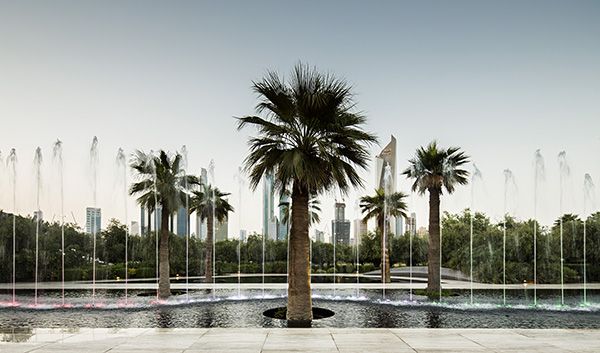 History is Written SdARCH Trivelli&Associati has managed to design the Constitution Garden of Kuwait by combining the symbolism of democracy with the hot arid climate of the Middle East in a clever way. The Constitution Garden is a story of how one can design with the arid climate rather than against it with the use of vegetation and water and at the same time make a public garden full of meaning. 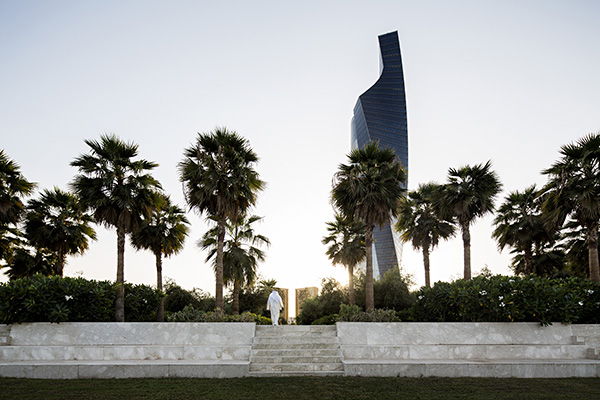 The people of Kuwait now have an oasis-like garden where one can enjoy the shade of the trees and cool down with the water sprinkler system while finding the roots of their citizenship. The Constitution Garden of Kuwait will always be there as a clear symbol and celebration of Kuwait’s path to democracy for generations to come. It is a place full of history, but first of all, it is designed for its people.

How would you tell a story of the path towards democracy through landscape design? 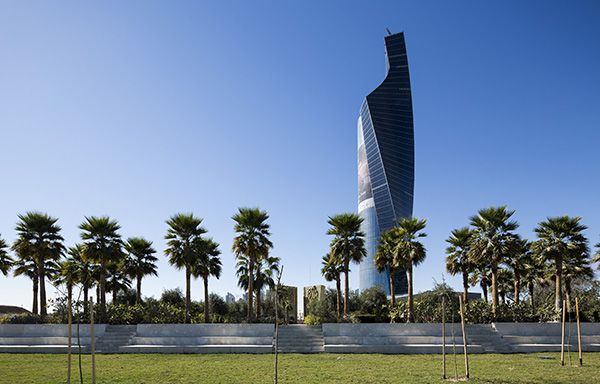