Article by Erin Tharp The Rooftop Park at Saint John’s Bulwark, by OSLO Ontwerp Stedelijke en Landschappelijke Omgeving, in `s-Hertogenbosch (Den Bosch), Netherlands. In 1999, the town council of the city of s-`Hertogenbosch began restoring the fortifications that surround the old town as a means to address flooding from the surrounding rivers. The town is home to 6.5km of walls, originally built to defend the city from invading enemy armies.

A Brief History of the Site

By 1995 most of these walls were in disrepair and had become inaccessible to inhabitants and visitors. In addition, the city was experiencing extreme flooding from the waters of the Aa and the Dommel rivers. Saint John’s Bulwark is one of 83 projects that make up this vast restoration. Originally, this bulwark was an important fortification and a former main entrance to the city; in fact, three generations of city gates were located here. Because of this, the planners decided to make the most of the area and to create an underground building to house an informational museum and sell city tour tickets. The museum also features a terraced cafe designed by Van Roosmalen and Gessel Architects, who made use of the remaining foundation in their design and added a Cor-ten steel skin as well as thin, crooked steel columns to support the massive roof that would house the new rooftop park. 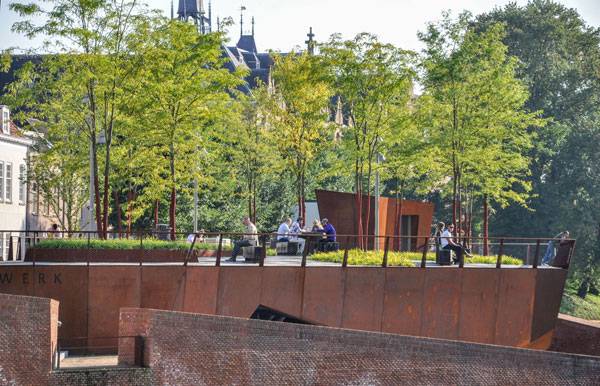 This is where OSLO Ontwerp Stedelijke en Landschappelijke Omgeving stepped in. Lead architect, Martien van Osch, began working on the design for the new rooftop pocket park and envisioned that once it was completed it would become a destination for visitors to the historic city. To start, there were a few challenges to overcome, for example the space between the building roof and the ground level varies from 17 centimeters on the city side to 59 cm on the water side, and designers needed to figure out how to obtain 60 centimeters of planting depth so they could include medium sized trees in their design. 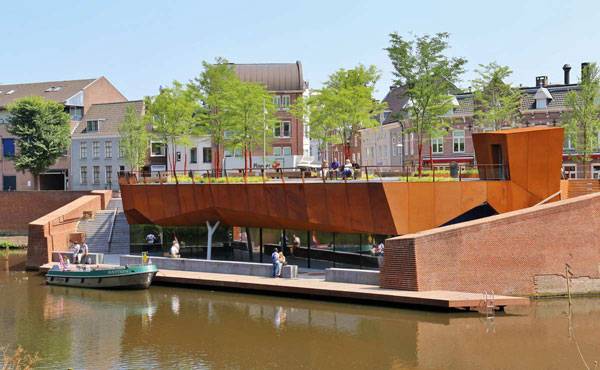 On the city side they incorporated Cor-ten steel planters to give them the space they needed and in other areas they incorporated descending gradients of 4 percent in order to obtain a planting medium installation height of 60 cm.

Stunning Views of the River

Due to the location of the bulwark on the outer bend of the Stadsdommel, there is a stunning panoramic view of the entire river Dommel from the park, but this location also means the park is situated in full sun for most of the afternoon and early evening. 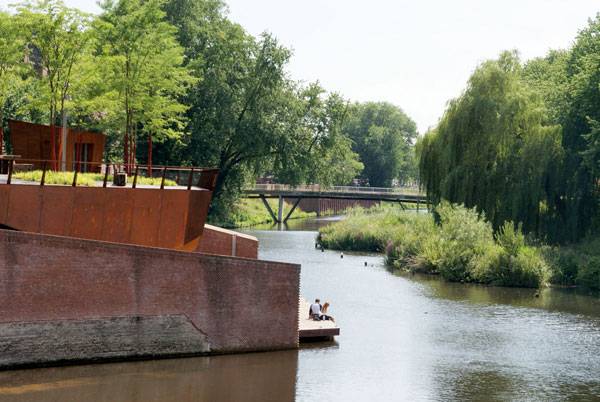 To address this, van Osch incorporated 11 single and double honey locusts (Gleditsia triacanthos) into his design to offer shade to visitors. The fine-textured trees will only reach a height of 8 to 10 meters due to the shallow planting medium of only five to seven cubic meters, and through pruning. They were chosen due to the effect of filtered sunlight for those seated below them. 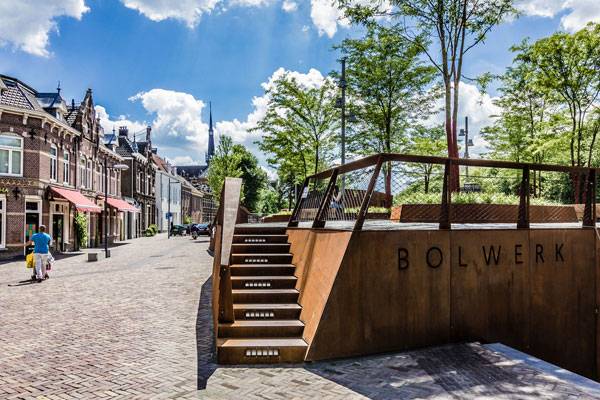 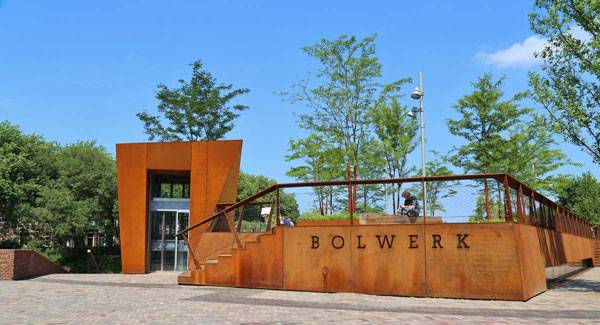 Finally, the building beneath the park is comprised of hard lines and sharp angles, which could have complicated the design of a park. However, van Osch chose to incorporate some of these angles into his own design through the use of specialty concrete paving tiles made by Schellevis and designed with these angles in mind.

They are placed randomly and are meant to mimic ice floes with their tips almost touching and are connected with a solid gravel carpet made of Aruduin-gravel bound with epoxy. This gravel allows rainwater to be transported to the substrate so that the plants can be watered. Excess water flows into a foundation made of rubble with a lot of hollow spaces where a sensory system helps control overflow and dry spells to ensure even watering. Planting beds are home to various Carex species, which are contained by wooden planks painted with red Cook Paint. This is the same paint used in Scandinavian countries to protect wooden houses against the weather whilst allowing them to breathe. It was chosen due to the way it mimics the Cor-ten steel and seems to rise from the rusty material. 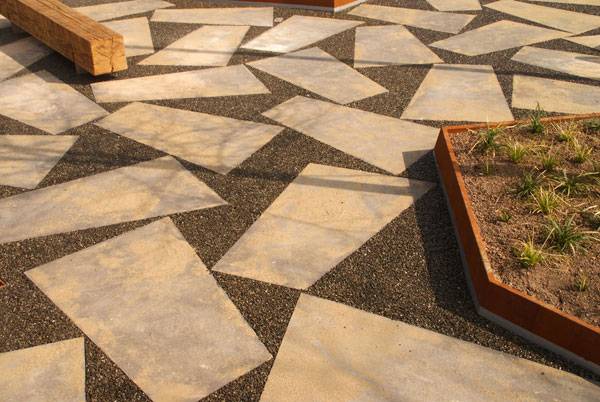 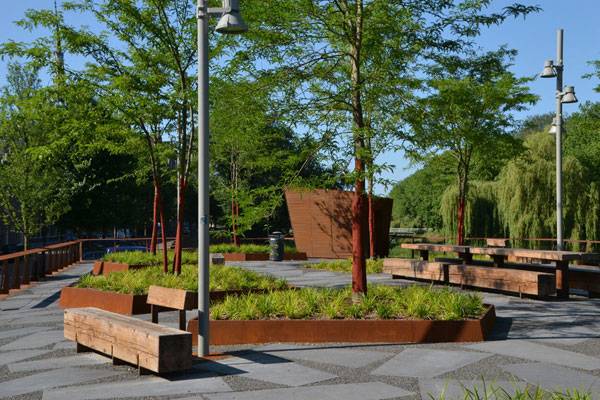 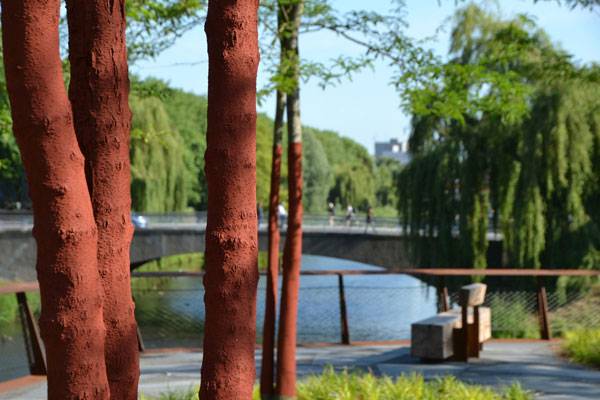 The Centerpiece of The Park

The centerpiece of the park is a communal table that is six meters long and made from a combination of Cor-ten steel and rugged Douglas fir beams. It is situated among the planting beds and was placed in a way to create small, intimate spaces in the park where more benches, created by Grijsen street furniture, are located. 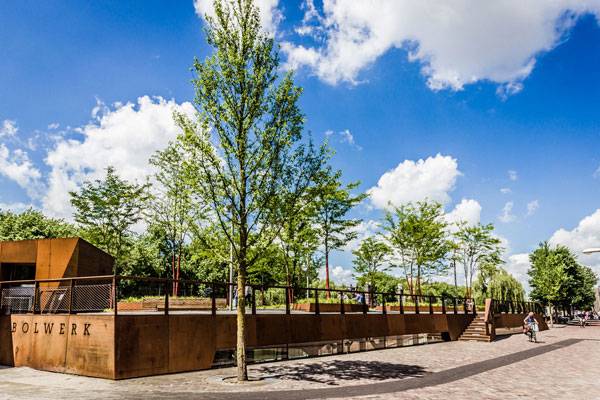 This restoration is further proof that cities can successfully multi-task when trying to solve a problem. Here, they not only addressed the problem of flooding by restoring the walls that surround the city but they were able to unearth and restore a vital historical site and turn it into a viable place for the future. 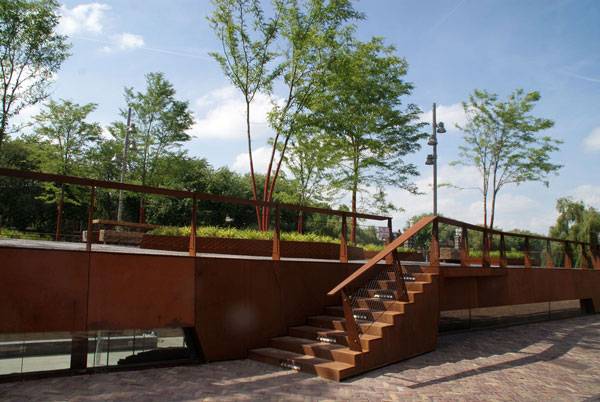 In addition, they created a beautiful rooftop park that not only added a green space to the city but also has already proven to be a favorite destination for both locals and tourists who come to enjoy both the social aspects and the beautiful views. Have you visited this park? And if you have, what did you think?Let us know in the comments below! Go to comments 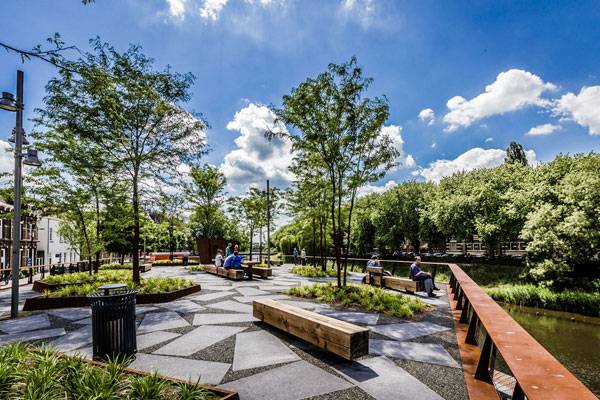