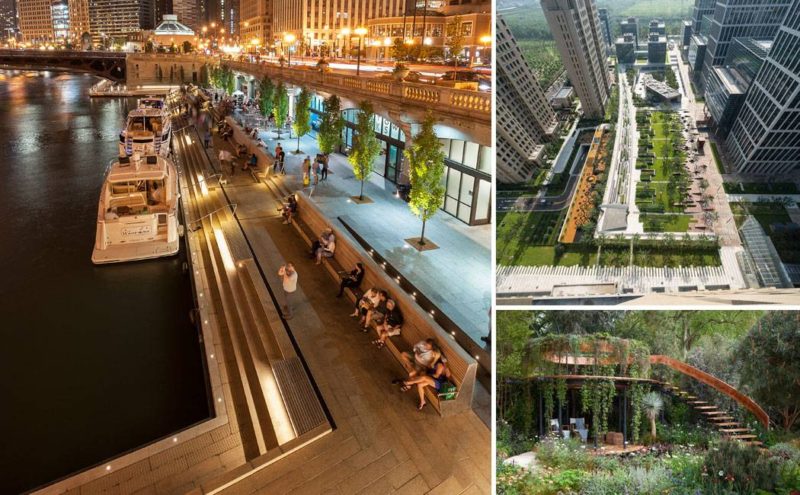 The official Landscape Architects Network choices are here for our top 10 landscape architecture projects 2016. Covering a range of varied projects that are sure to keep you inspired going into 2017. 2016 has been an exciting time for landscape architects. It’s been a year of expanding creative innovation, receiving recognition, and setting standards for future development. We have, once again, arrived at the time of year where Landscape Architects Network presents you with the best projects completed during the year. Our criteria: Projects that pushed the boundaries of our profession. From a playscape that draws its design roots from mining heritage to a complicated exploration of mathematical patterns in nature, revealing a perfectly precise garden, to a landscape that welcomes the public while protecting a radiation research facility at the same time, let us reveal the most impactful projects of the past year.

How do you direct a design toward a trendy population? By uniquely targeting young newcomers to the city, who, although working, cannot afford housing at high-end prices. Lab D+H helped to design an affordable, mixed-used development comprised of small apartments and commercial uses. The cost-saving design was based on a modular grid system used for softscape, paving, and furniture that also reduced labor and allows for easy replacement. 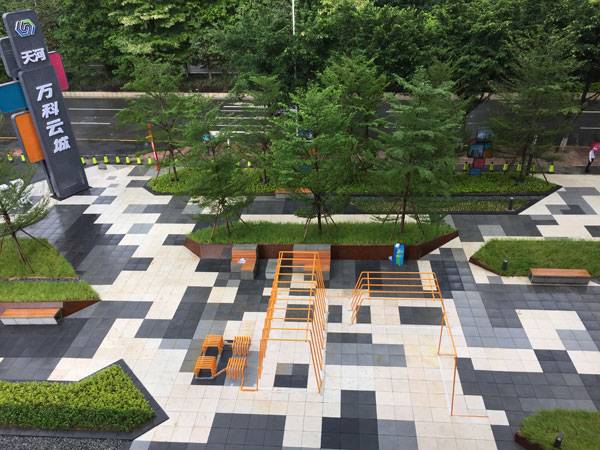 From precast concrete to pre-perforated steel plates, the project not only looks vibrant, it also avoids over-use of natural stone. This cleverly executed, creative, and compassionate scheme considers the need of the younger population to thrive in the city while being able to afford a home. 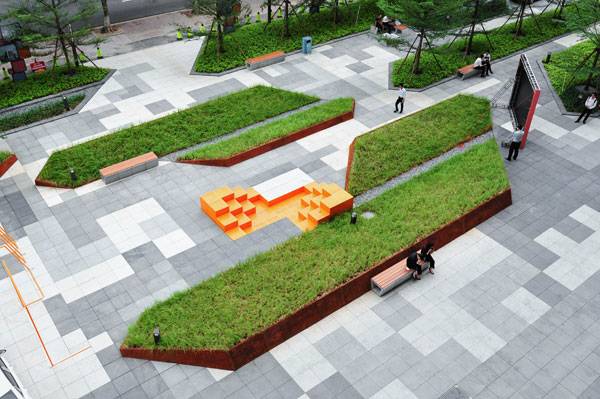 Designed by one of the green architects of our time, this project is a testament to designing in a strikingly harmonious nature with buildings. A leftover car parking area of the 2004 Olympic Games will now be a focal attraction point in Athens. 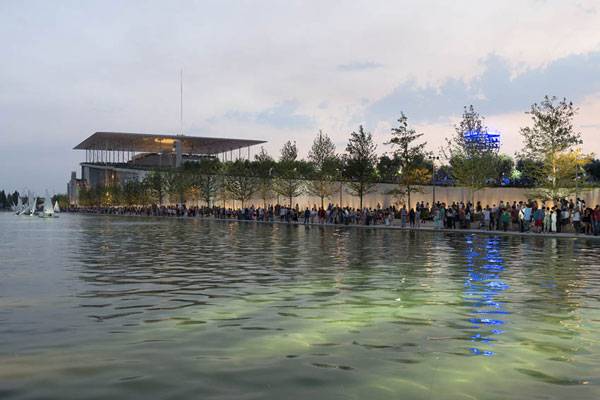 Many cities have turned their backs on their rivers. Chicago was no different. But the last decade has shown that such mistakes can be undone with great design. Following the plans of architect and urban planner Daniel Burnham, whose vision sought to change the relationship of the city with the river through a series of riverside promenades, Sasaki and Ross has further developed this key city space with new interventions as part of the Chicago Riverwalk Expansion. 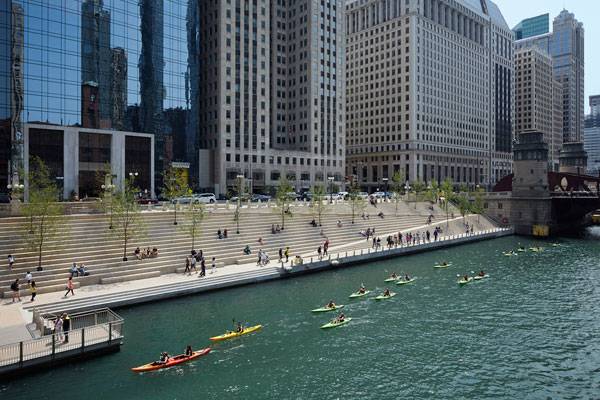 The new public spaces revealed this year were “The Jetty,” educational floating wetlands and water gardens; “The Water Plaza,” containing an interactive children’s fountain feature and relaxation space; and “The Riverbank,” a public lawn and route that connects lower to upper Wacker and Lake streets. The outcome of the ecologically conscious and public-oriented spaces is only one of the reasons why it deserves to be on our Top 10 list. 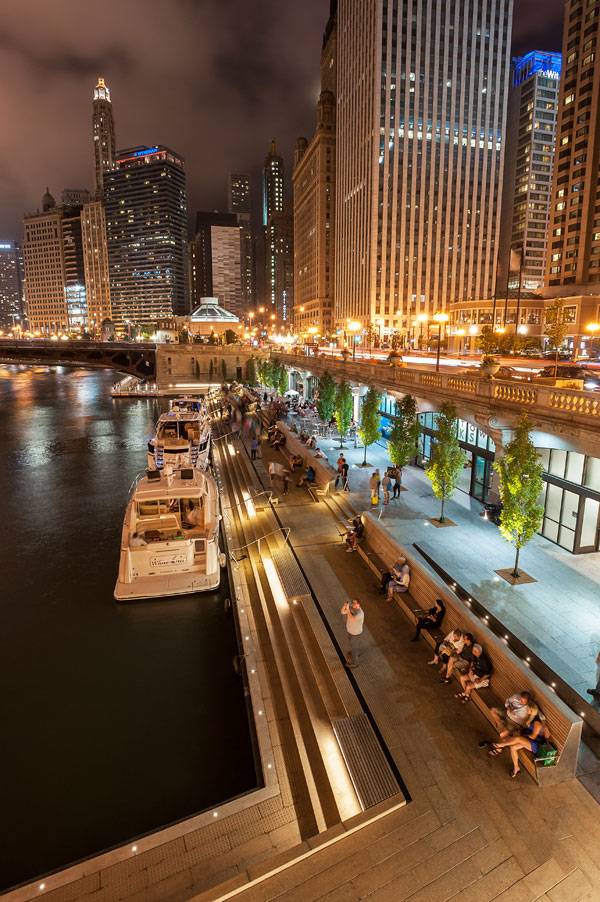 When the private owners along Las Vegas Boulevard came to the realization that positive investment in outdoor public space pays out, what manifested was “The Park”– the first ever park along the Las Vegas Strip. No pressure, but it seeks to mitigate several regional conditions of the area, from heat to drought and dust storms, through a series of iconic shade elements, water features, desert plantings with drought-resistant trees, and sculpture — all capturing the essence of the popular tourist destination. Contrasting with the artificial attractions to date, “The Park” signifies the first potential of transforming Las Vegas back to an oasis within the desert. WATCH >>> The Park Las Vegas Strip – MGM Resorts International

As a LEED Gold Project candidate, the mixed-used development of Beiqijia Technology Business District comprises a strip landscape with clear distinctions between the different types of development. The strips then become the beginnings for bespoke site furniture, paving, plantings, and bold gateways. 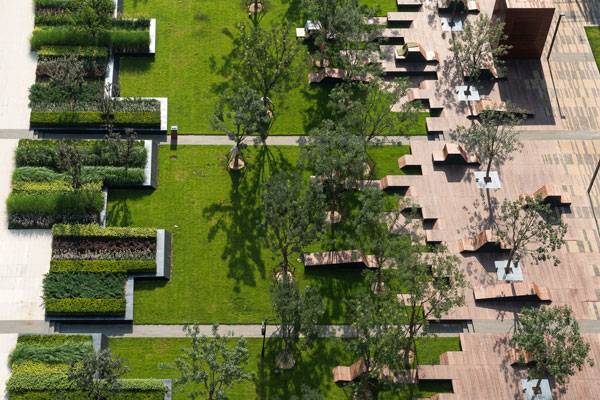 Aside from its aesthetical features, the functional processes of the landscape include harvesting and re-use of stormwater run-off, mitigating the urban heat island effect and managing microclimates, making it one of the best functioning projects of 2016. 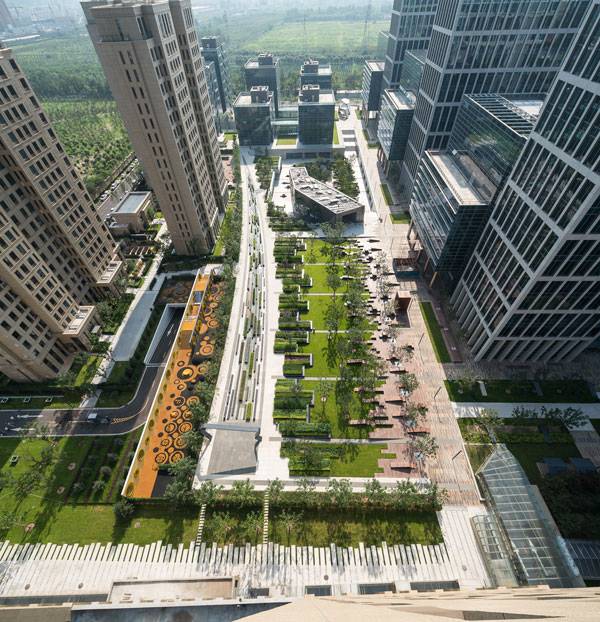 The Hills accommodates Governors Island on New York City’s harbor to complete the transformation of a former military base into a public park. This is an example of a carefully considered design that accounts for the acute visitors’ experiences, which landscape architects can understand. As such, West 8 has sculpted the topography to create winding paths and trees to “conceal and reveal vistas”, choreographing the whole experience of the park with these planted hills, defining the character and creating a sense of anticipation throughout. The resulting planting strategy is a complex answer to challenging issues of microclimate and slope degree variations, making it one of the toughest projects from the list to give the ultimate visitors’ experience. WATCH >>> The Hills

4. The Winton Beauty of Mathematics Garden, RHS Chelsea Flower Show 2016, United Kingdom, by Nick Bailey, completed May 2016 This show garden really pushes the boundaries of creative thinking. The whole design is based on the mathematical patterns that appear in nature — for example, the Golden Ratio — which are then communicated through the garden’s structure and layout. The garden designer Nick Bailey has implemented bands of copper elements and a staggering amount of mathematical algorithm-driven plantings from around the world to create a special kind of place one would only dare to dream of in animated movies. 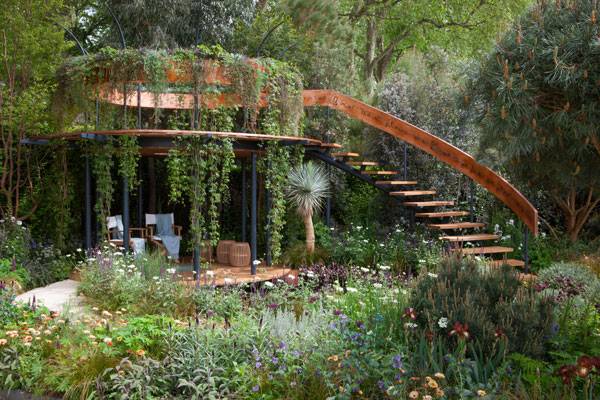 3. Shelby’s Farm Park Woodland Discovery Playground, Memphis, Tennessee, by James Corner Field Operations, completed in 2016 Shelby’s Farm Park opened to the public earlier this year to reveal The Heart of the Park, the central core to ongoing improvements made to one of the most loved and largest urban parks in the United States. James Corner Field Operations has increased the lake area from 21 to 32 hectares, with new meadows and the addition of 3,000 trees. The project also benefits the users of the landscape with a new community hub, walking and biking trails, lakeside activities, an outdoor event stage, and more, making it an impressive piece of development. WATCH >>> Shelby Farms Park

The landscape design at Max IV Radiation Center has set new standards for research facilities’ outdoor areas worldwide. In efforts to transform the northeast of Lund from agricultural land into Science City, the extroverted, outward-facing, 19-hectare public park welcomes people into its space. 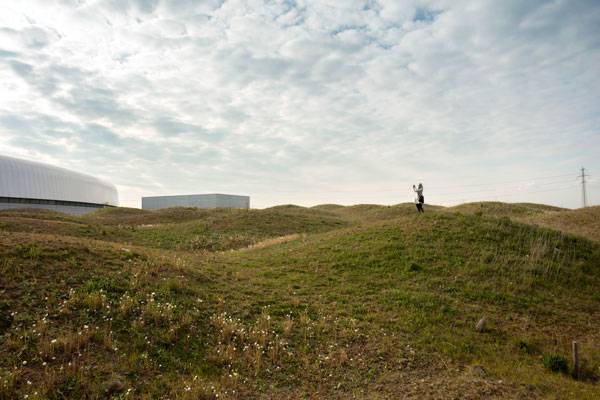 It also tackles the city’s sustainability goals and mitigates ground vibrations from nearby highways, which can influence laboratory experiments, through an undulating design that includes stormwater management. The high-tech facility with the low-tech waves of meadowland is a fascinating combination. 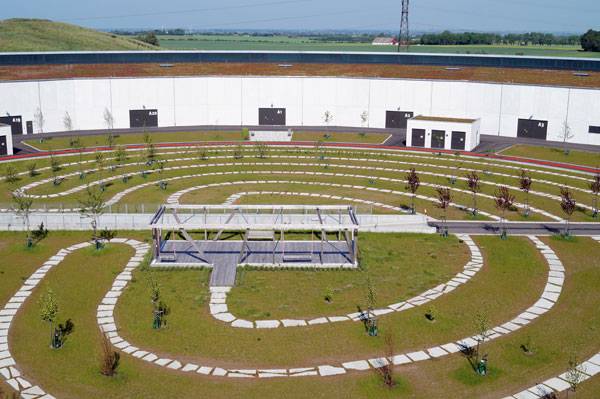 A former coal-mining site with its 60-meter-high landmark mountain of rubble has been transformed into an adventurous playscape. With many references to its history, the design — the “Pole Forest,” “Coal Square,” and prismatic playsurface — allows young and old alike to experience the industrial heritage in a playful way. Highly respected by Landscape Architects Network, the project definitely pushes the boundaries of safety in play and user experience in contextual ways that we had not yet seen in the profession. WATCH >>> Playlandscape Be-Mine Beringen

With the scope to be creative, the listed landscape architects have played a huge role in bringing our profession to the forefront of design, thrilling the public, enhancing everyday lives, and benefiting our environment. One at a time, projects such as The Park in Las Vegas and Max IV Radiation Center in Lund have also shown us the increased recognition of the social and monetary benefits of investing in our outdoor spaces. We can also see how computer technology has allowed us to create more complex designs befitting functional requirements. As technology gets more advanced and other global issues fill our everyday news, let us anticipate an equally exciting response from more landscape architects in 2017.