On January 2014, two Rotterdam-based design firms won a competition for the redevelopment of Vogabyggd in Reyjavik, Iceland. The task is part of a municipal long-term master plan for the area and intends to re-invest in the currently neglected potential to link the city to its surrounding Icelandic landscape. The Winning Team Through an invited two-stage competition, teams Felixx and Jvantspijker collaborated their efforts to produce the design that became the first prize winner. Jvantspijker, a planning and architectural firm is mainly intrigued by the diversity in public spaces and integrated sustainable solutions. Felixx, a landscape architecture firm with the motto ‘realizing happy environments’ focuses on new environmental challenges. As the municipality’s all-encompassing plan commits to redevelopment, densification and sustainability, the two firms used the ambition of densification to alter the current relation between the city and landscape which are “acting as the inverse of each other”.

The guiding concept behind the redevelopment of Vogabyggd, credit: Felixx

Cityscape and Site Location The proposed design will be an added value to the already magical winter city of Reykjavik. Although an urban settlement of short history, the Icelandic capital is a walkable city of inclusive accessibility and lively coloured rooftops. Moreover, due to its presence around a series of volcanoes, glaciers and geysirs, Iceland’s relation to nature makes up a significant part of its identity, which explains the desire to integrate sustainable solutions in their city development. Surrounding icy scenes, an adjacent nature reserve and an undervalued waterfront are what characterize the selected site located in the world’s northernmost capital. The location is tightly embedded within a port and transshipment area, a residential area and a large nature reserve. 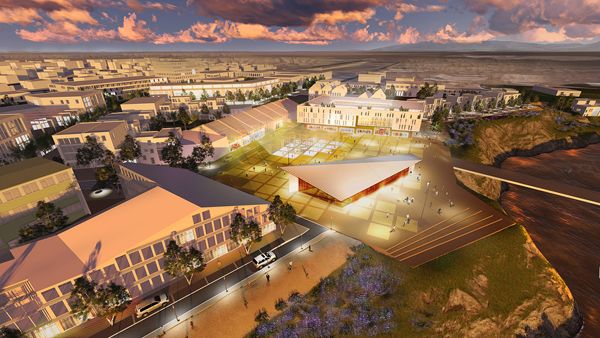 The Design: A Renewed Link The plan, approached from the urban vision of “Making City”, consists of 110.000 square meters of mixed use , including four hundred new dwellings. The jury of the competition praised the “ambition and high quality” of the proposal as well as Reykjavik’s “standards of innovation, compact and integrated approach to planning and landscape.” The desired linking of the city to its adjacent landscape is performed in the design through a strong network of connections through the city and neighboring nature reserve. Community making and local identity is at the heart of the project. Since the sea is a vital part of life for the city dwellers, the design can be recognized as a community by the sea. The following vision is translated spatially through the creation of good connectivity, streets, integrated parking solutions and high consideration to diversity and ecology. Among the most important elements of the design is the new central square created along the water. The designers call it the “new place to be”.
This square is cleverly designed to be aesthetically interesting yet simple enough to leave room for a variety of functions. The winning design team is led by origin Icelandic urban designer Orri Steinarsson; the project is currently under development. Implementation is expected to begin by 2015. Taking advantage of potential connections to nature from within the city is becoming an urgent need as urban sprawl is on the rise. Connections are not only limited to waterfront redevelopment, but can also comprise green corridors, desert adaptive landscape architecture and countless other examples. I encourage LAN readers to think of the attempts that were made in your respective cities to provide connection to the surrounding landscape. Article written by Dalia Zein
Published in Blog