I believe the last five years have been an exceptionally exciting time for the design profession in the realm of technology.  The advent of powerful mobile technology and the increased miniaturized of computing power has created a series of new devices and software packages that have the ability to positively impact the way we work.

In the Landscape Architecture & Environmental Planning Department at Utah State University, I have been actively exploring ways to integrate different mobile tools into our studios and projects.  For a field that spends a great deal of time on site, being able to access the necessary tools on the go is not just a luxury, it’s an imperative to good design.  Certainly we have been using tech in the field for many years, but often in a way that can feel more like an annoying necessity.  I’m sure many of you, like me, have balanced a laptop on your knee while carefully balanced against a fence post, or gathered around the computer on the car hood with your colleagues.  The mobile innovations have already started removing that annoyance factor on the site, and the pace quickens every year.

A couple months ago we got a Wacom Cintiq Companion that I have been having my students experiment with in the studio and on the site.  For those of you who are unfamiliar with the Cintiq line, it is a display you can draw on with a stylus.  People’s first reaction is to think of an iPad, but I’ve found that Cintiq’s are more precise and natural to draw with than an iPad (the iPad Pro and Apple Pencil challenge this, but my opinion is still in favor of the Cintiq for most applications – but that is a topic for a future post).  The precision of the Cintiq enables me to design, draw, and render in a way that most closely resembles pen and paper, all while using the same programs (and interfaces) that I am already familiar with.  The Cintiq line was traditionally a monitor device that you plugged in to your computer, but the Cintiq Companion is a stand-alone tablet computer running a full version of Windows.  To me, it seemed like a godsend, superior drawing precision, exceptional mobility, and powerful processing.

That’s the background.  Now for the fun part, actually playing (or designing) with it.  I’m a technophile, and sometimes I think my excitement for technology gets me a little carried away.  So I gave the Companion to a team of students and sent them out to have some fun on a site.  What I wanted to know was, well, everything.  Did it work?  Did it make design tasks easier?  More difficult?  More complex?  How did it change the way they did things and thought about things?  The team of students took the Companion on site to do their initial site inventory and meeting with the client.  They used it exclusively: note taking, basemap production, photo documentation, sketching, etc.  Here’s what we found out.

The on site experience was best summed up by one of the students describing it as “the easiest inventory that I have ever done.”

From the technical side, a big benefit was efficiency in the workflow.  The students took photos with the Companion and were then able to immediately open those and start working on them in CAD, Photoshop, Painter, etc.  Being able to immediately start analyzing and brainstorming with the client was very valuable.  And while that can be done with a pad of paper and some pencils (or a tablet), using the Companion allowed the students to gather information and begin analyzing it with the client in a digital format that fed perfectly into their workflow (same files, same programs).  When they got back to the studio, the files were ready to be shared and worked on, no reformatting, no digitizing, and no waiting.

Because the Companion is actually a computer, we were able to couple it with some of our more advanced tools.  We took a drone out to the site and were able use it to take photos, download them to the Companion, and create a 3d model of the site in a matter of minutes using Pix4d.  Want to impress a client?  Fly a drone over their site (you’re already cool, just for doing that) and then show them an image-mapped 3d model of their site ten minutes later (you have just become a design god).   And again, everything is ready to use later in the process with no need to export from an app or email information to yourself. 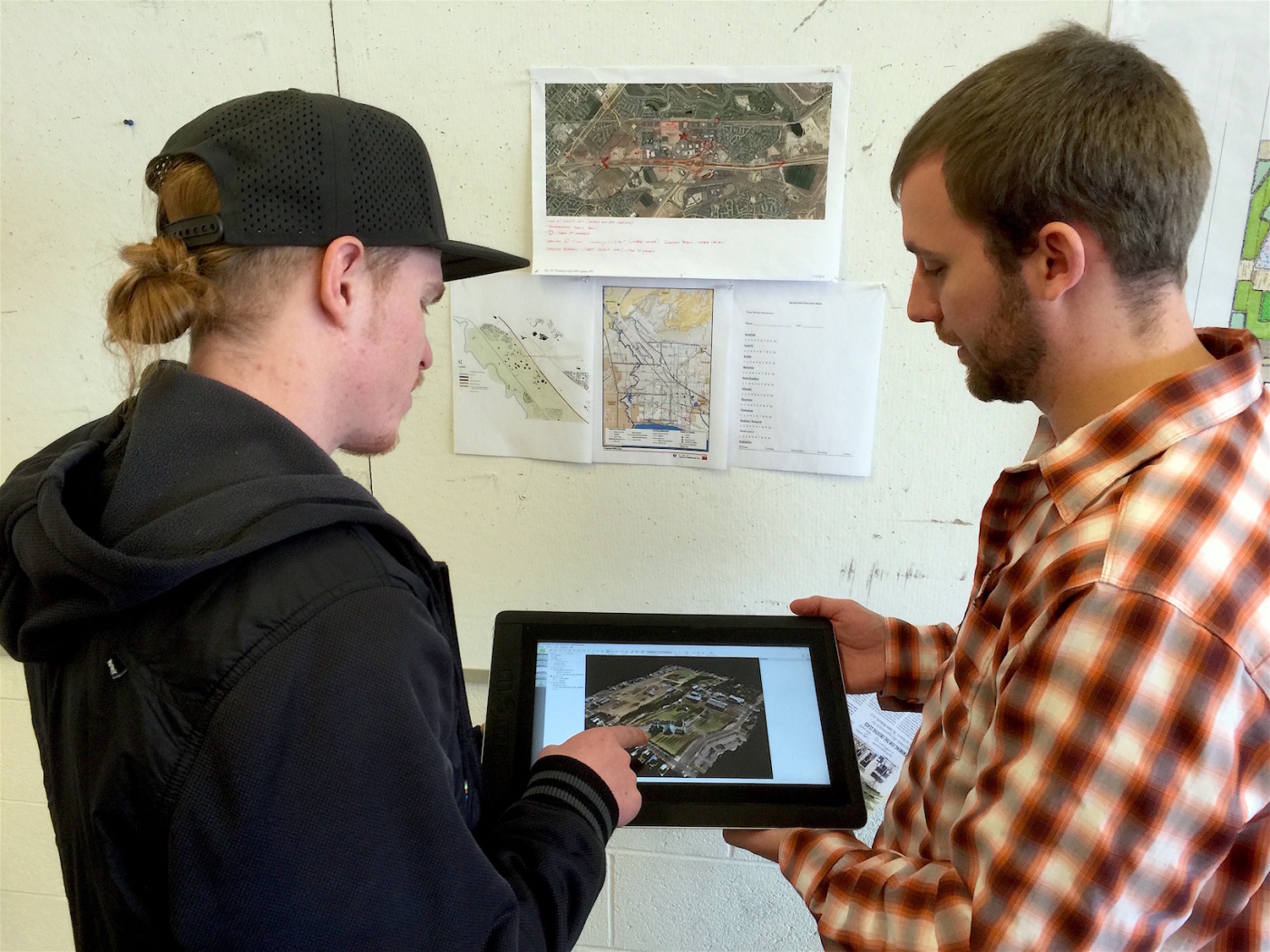 This fed into the design conversation with the client, which I think is one of the most valuable benefits we realized.  All the photos, models, and notes that we took on site immediately came into play when talking with the client about their desires and our nascent vision and understanding.  Being able to draw on photos, base maps, work with models, quickly measure and place things in AutoCAD and SketchUp were all features that helped move the conversation and convergence on the design along.

Surprisingly, one of the most useful features was the built-in handwriting recognition.  We were skeptical of how well this would work, but we were surprised at how effective it was.  It readily deciphered the “chicken scratch” of one of the students, something even I struggle to do sometimes.  To be able to jot down notes throughout the site visit and then have those become automatically generated typed document was pretty remarkable.  It was one of those moments where the analog and digital methods worked together seamlessly.

Things weren’t all roses, they never are.  There was definitely some complaints about the lack of some features and functionality.  Students really wished that Wacom had built in an overlay feature that allowed them to draw on the screen with the touch of a button.  This would have been a useful feature when browsing through photos, but also when working in other applications and needing to quickly express a graphical concept without having to jump into Photoshop or another art program.  Functionality for this exists with other applications that we can install, but having it be a built in hot-key feature seems like it would make a lot of sense.

Older models of Cintiq’s had a touch bar that controlled zoom functions within an app.  I’m assuming Wacom got rid of this when they added additional hot-keys and a touch screen.  However, the students really wished this dedicated scroll pad was still included.  A minor gripe, but something that I agree would add to the user experience.  Especially as Photoshop had the unhappy tendency of jumping to top right corner of an image and zooming way in.  The only way to fix it was to zoom back out to regain control of the canvas.  I don’t know where the glitch lies, and forums didn’t provide any help.

Finally, having a sun guard and strap on the back of the Companion would have been very helpful.  The Companion screen is not as bright as a regular laptop monitor, and the students had to either find shade or work in their own shadows from time to time.  Having a sun guard (I know, they look dorky) would be a major benefit, especially where we work outside a lot.  On the same lines, having a strap (or handle) on the back of the Companion would really when working out on site.  Right now you have to rest in your arms as you would a pad of paper, not a bad solution, but being able to hold it out from your body a bit further would be a nice feature, especially when collaborating on site.

The Nuts and Bolts

That was our experience.  I’d be interested to hear other’s experiences using a Cintiq, drawing tablet, or tablet device.  Like I said at the beginning, mobile computing has already demonstrated that it is a game changer, and I am excited to see where things go in the future.

About the Author: Benjamin George is an Assistant Professor at Utah State University.  In addition to an MLA, he holds a PhD in Instructional Technology & Learning Sciences and researches online education and the use of technology in landscape architecture.  He is the director of the Digital Library of Landcape Architecture History.