PS 234 Independence School Play Yard, by KaN Landscape, in TriBeCa, New York City, USA. A classroom only creates an illusion of enlightenment. A learning atmosphere is where kids can express themselves in their own way, explore their surroundings, and think freely. Children need a space where they can create their own world, free of fear and judgment, and at the same time learn through observing their surrounding environment. When designed thoughtfully, schoolyards can offer such an atmosphere. In the fall of 2014, KaN Landscape designed a new schoolyard for PS 234 Independence School, the first public school located in historic TriBeCa in lower Manhattan. The school was in need of a play yard with diversified sports opportunities and a play experience for children ranging in age from kindergarten to fifth grade. In response, the design team thought of creating a space that would be intriguing, interactive and fun. 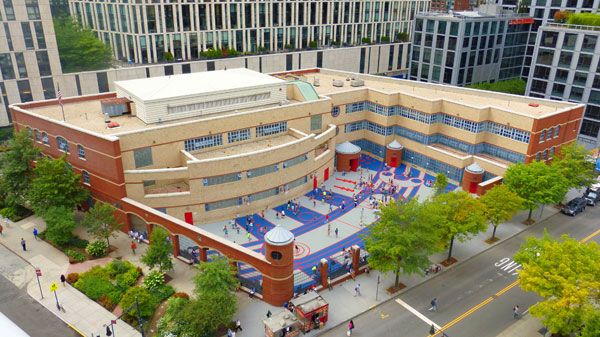 The Magical School Building The building that houses PS 234, designed by Dattner Architects in 1988, is rich in history. It provides pupils and the people of the city with lessons about the area’s architectural history, construction techniques, and the history of the city and its waterfront. The brick arches, curved corners around the exterior perimeter wall, and the deep industrial windows all reflect the area’s 19th century mercantile buildings, while the cylindrical turrets and castle towers at both ends seem like magical fairytale towers and also hearken back to the former river’s edge. 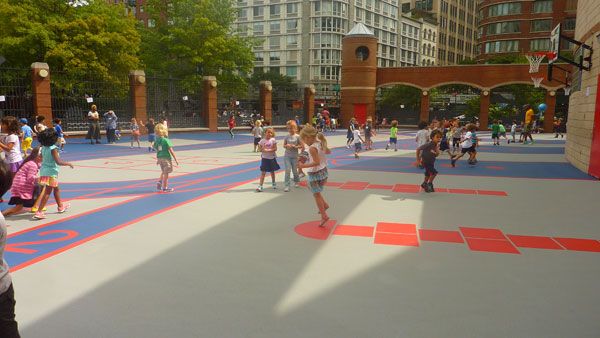 The Old School Yard To keep up with the architectural history of the 1890s and the skyline of the present city, the KaN Landscape team had to come up with something that would not interrupt the architectural and historical messages while at the same time offer a modern outlook. Related Articles:

Thus, the given program (basketball, track, baseball, and games such as four square, hopscotch, scully, etc.) was integrated and interpreted into a dynamic and playful layout revealing the strong architectural identity of the building. 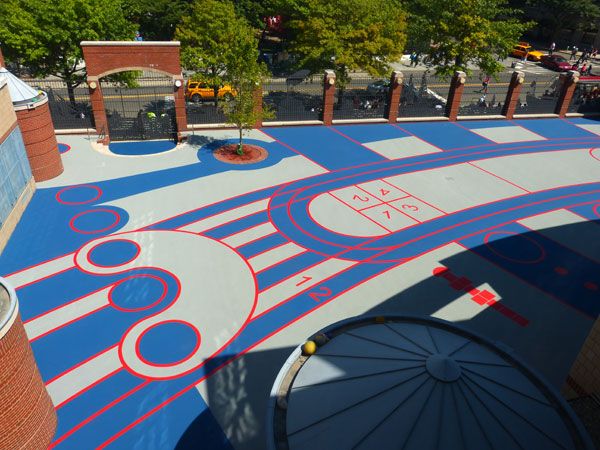 The Design, the People, and Their Involvement It is always very important to involve the people who will use the space in the design. When it comes to designing especially for kids, close and careful observation is always required. The point of view about games, play experience, or the atmosphere that a kindergarten kid loves differs a lot from that of a fifth-grader. As children grow, their points of view and understanding expand with their changes in likes and dislikes. Hence, KaN interviewed children, parents, the school principal, staff, and neighborhood residents to know and understand their visions, choices, and opinions regarding the design of the new play yard. Besides that, they also spent time observing the behavioral patterns of different age groups, play habits, use of space, and how they interact with the setting. 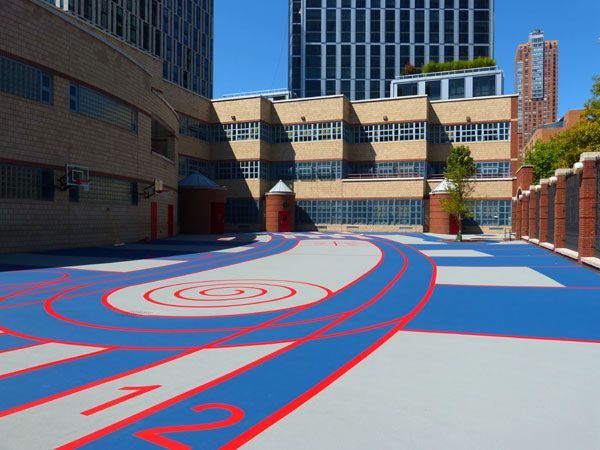 Reflecting Maritime Features Porcelain medallions and a decorative fence around the yard’s perimeter were created by artist Donna Dennis to echo the area’s marine history. The fence illustrates scenes from the vanished Washington Market and silhouettes of clippers, lighters, ferries, tugboats, and barges. The architectural team thoughtfully introduced some of these maritime building features, such as the porthole windows, which land in the yard to create the base for a merry-go-round and other spontaneous team play. 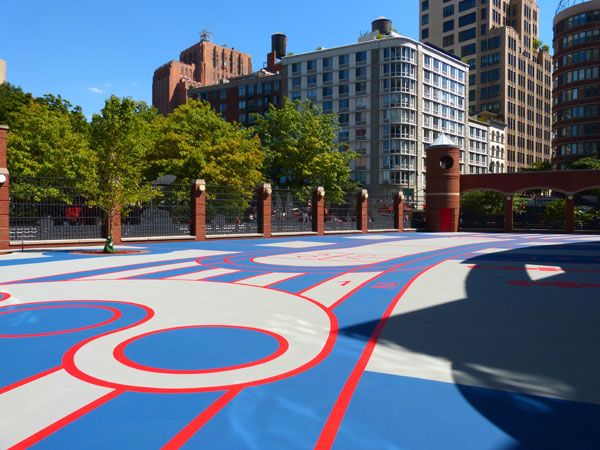 A Delightful, Free-Play Area The world around us heavily influences the way we feel and what we design. The use of colors and shapes affect our emotions. Keeping that in mind, KaN used various shades of bright hues, shapes, and lines on the schoolyard. The children follow the shapes, jump over them, and hide in or gather within the lines – these functions create a delightful play area for them and fulfill the main intention of the architect. The bright hues make it an eye-catching dream area for children. 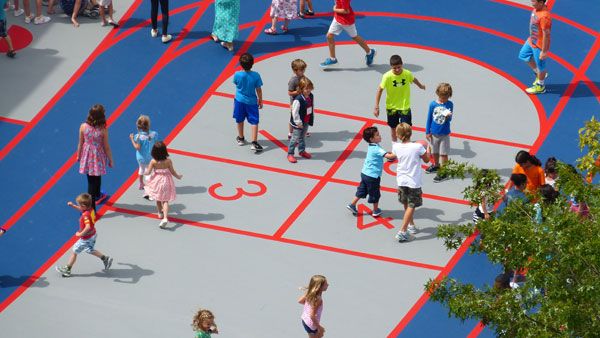 Overall, this project shows us why the involvement of the users is important for an efficient design and shows how its success lies in creating a balance between the architectural history of the school and the present needs for the play yard. Though the school’s faculty and children are happy with the new design, I think it would have been more efficient and intriguing if they could have added some green spaces and trees to further boost interaction between children and nature. 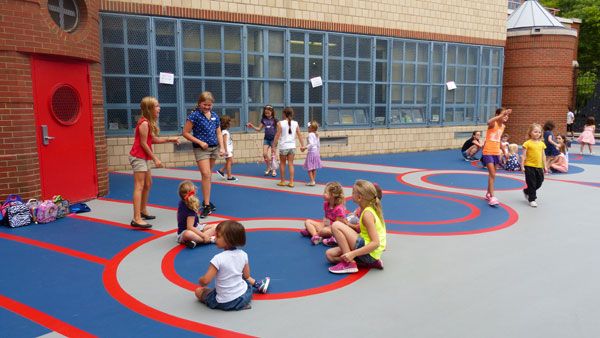