Scharnhauser Park, by Janson + Wolfrum Architektur + Stadtplanung and Atelier Dreiseitl, Ostfildern, Germany. In the early 1990s, the Planning Department of Ostfildern owned about 70 percent of the site and had a clear aim: to create Scharnhauser Park as part of a first-class, energy-efficient neighborhood that addressed the area’s housing shortage. Alban Janson and Sophie Wolfrum were in charge of designing an ambitious master plan, with a well-integrated rainwater management design by Atelier Dreiseitl also worth our specific attention.

From the air, Scharnhauser Park looks like a long tongue of low-density buildings surrounded by a patchwork pattern of farmland. The district grows on a slope along the train rail, the main road, and between two tributaries of the Neckar River, all of them reinforcing the north-south direction. Designers were focused on this main line to channel the space through a central axis of public park and a boulevard of trees in a “T” shape. 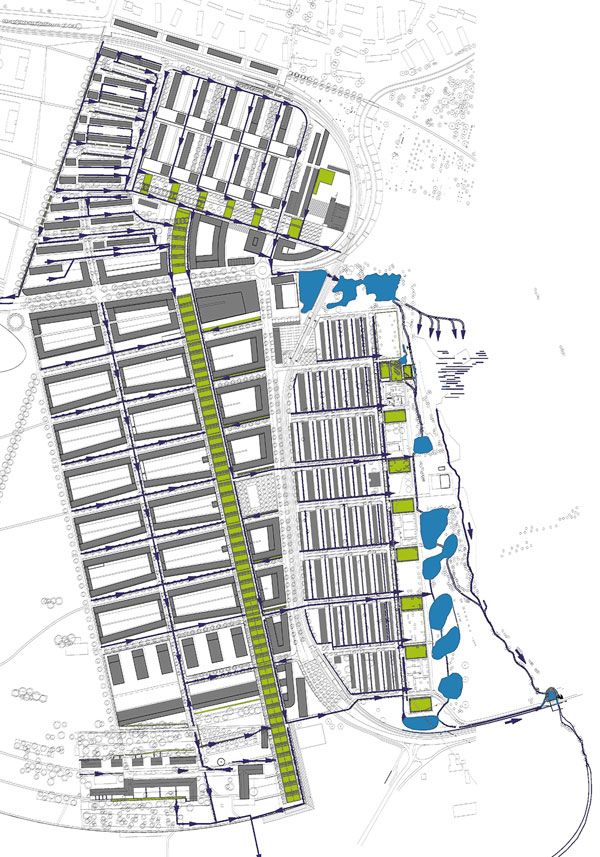 Dealing with the Long Nature of the Site The design has an extremely long longitudinal element, balanced by a regular sequence of transversal hard pavement lines. In this case, the park works in a double direction: connecting the east and west housing areas through the street infrastructure, and facing the natural north-south slope by integrating a short number of steps in the paths of pavement. The housing development follows an orthogonal scheme on both sides of the green axis.

Laying Down the Green Carpet The heart of the project is the great, green carpet that suggests openness and accessibility instead of staying locked and looking at itself, as the central position could suggest. Without any southern border, it seems to welcome the surrounding clear landscape from the incredible, non-disturbing views to the local grass on the ground as dominant vegetation. Furthermore, its equidistant position reinforces its public and democratic features. These are the many advantages from the first simple geometric scheme.

But what makes Scharnhauser Park more than an abstract and tactical layout? Likely, the staircase effect of the public space makes it land closely on the ground and provides a lot of its own character. The oversized park combines human and urban scale when it is divided in terraced platforms while preserving a unitary image.

Embracing Low-energy Solutions Scharnhauser Park includes different types of housing grouped into three homogeneous zones, providing nice private gardens and small public areas. All those buildings were designed and built according to the low-energy standard, but going even beyond the German ordinance at the moment. As usual in cold climates, the main focus was to reduce the energy level required to heat the houses through high-tech insulation coverings. See More Projects Featuring Atelier Dreiseitl:

Digging Deeper Into The Energy Saving Strategy  Critical points were reinforced with additional external wall material and stricter values in windows. However, that is just one side of the energy-saving strategy. What about the heating system? The master plan based it on a decentralized scheme that included a small biomass power plant. Producing Power From Renewable Sources Taking advantage of the biomass firing and the ORC — a clean process to produce power from renewable sources — this station is able to provide 80 percent of the heating energy and about 50 percent of the electrical power required by the neighborhood. Rainwater Management Plan The central, simple “T” park also integrates a very well developed rainwater management plan in the project concept. From the beginning, Atelier Dreiseitl worked on addressing two main conditions: The first one was not to send any stormwater to the local wastewater treatment plant; the other was dealing with the naturally low soil permeability.

How did the team find the most suitable strategy? They looked for ways to drain and collect stormwater without drawing attention. The rainwater is driven through open channels and swales into the green, where there are layers of humus, sand, and volcanic rock, as well as underground tanks. Water runs down the multi-platform park by the steps, creating a singular effect while the water remains on the surface. Parking areas are really green spaces, and houses were designed with green roofs to retain more storm water. In case of eventual overflows, water can be retained by retarding basins, although just for a short time.

Award Winning Design As you can see, there are several unadorned keys building a close coherence between functionality and design. In fact, the park is considered a highly valuable example of sustainable community, receiving the Städtebaupreis (German urban planning award) in 2006. Far away from the noise, green urbanism could not be more spectacular.