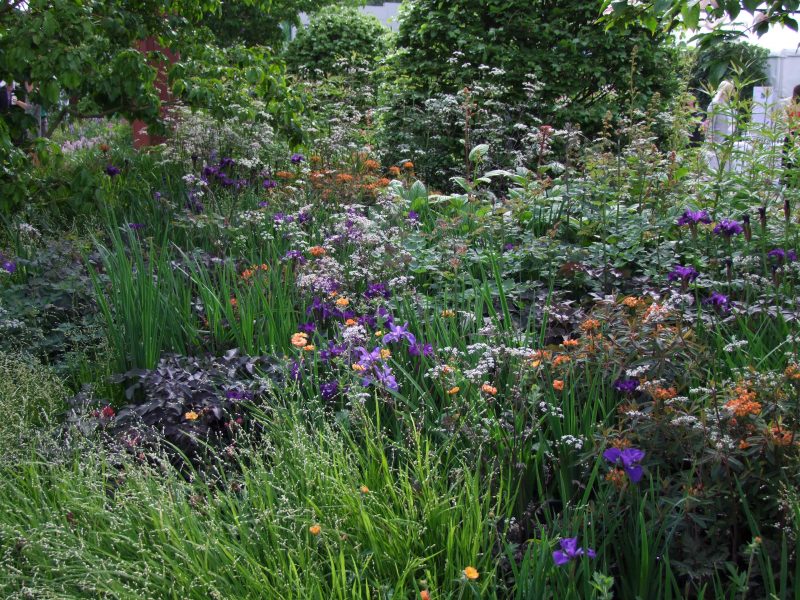 Confronted by the jewel-like intensity of Piet Oudolf’s Lurie Garden or Tom Stuart-Smith Studio’s 2019 Chelsea Show Garden (pictured above), you might assume that these plantings are individual works of genius. Around you, masses of plants ebb, water-like, tumbling into each other and between. Seedpods thrust skywards. Fuzzy stems glitter with morning dew.

These gardens seem such a stark contrast to the ordinary landscapes—static and banal—that most of us accept as part of our daily routines. They’re like wild landscapes—but richer, more colorful, more condensed. What features distinguish these contemporary plantings from more traditional approaches to planting design? My piece “Learning the Language of Contemporary Planting Design” offers an introductory vocabulary. In brief, these plantings are designed and managed as communities, rather than individual groups or specimens. Aesthetically, they have a wild look—they’re physically distributed in a way that looks organic, rather than geometrically in blocks, rows, or distinct groups.

Dr. Noel Kingsbury, in his writings with Piet Oudolf, has extensively documented the evolution of naturalistic planting design post-World War II. In particular, his books Planting: A New Perspective (2013) and Hummelo (2015) offer a detailed history of its development. However, I felt it was important to look a little farther back to better understand the forces shaping planting design today. Contemporary planting strategies didn’t suddenly emerge over the past 70 years. Instead, they reflect management practices and aesthetic concerns that have engaged practitioners for generations.

Designing and managing plants as communities, rather than distinct individuals, feels like the most striking divergence from traditional agriculture. However it’s actually a management style utilized extensively by indigenous peoples throughout the world, often described as agroecology. In agroecology systems, desirable species are planted or sown, encouraged to grow, and harvested as part of multispecies plant communities—rather than as single-species monocultures.

In Dark Emu, Bruce Pascoe reports extensively on Aboriginal Australians’ management of landscape-scale plant communities which were cultivated to encourage the growth of desirable plants—while also fostering growth of complementary species. Describing the kangaroo grass (Themeda triandra) meadows discovered by colonizers, Pascoe writes “Orchids, lilies, and mosses flourished among the grain crop.” The first European colonizers noted that these complex meadows supported such rich soils that they had difficulty riding horses across the landscape. Grain crops weren’t the only plant communities managed by Aboriginal Australians. Pascoe writes that fire was used to encourage the growth of fire-dependent crops such as yam daisy (Microseris lanceolata) and vanilla lily (Arthropodium milleflorum), both important edible crops in Aboriginal diets.

Throughout the Americas, First Peoples also cultivated food and medicinal crops as components of managed landscapes. Every elementary school kid knows the “three sisters”—beans, squash, and maize—which were cultivated together, especially by the Hopi, Oneida, and Iriquois. But companion planting wasn’t the only strategy First Peoples used for managing desirable croops. Paiute and Kumeyaay utilized irrigation and biannual harvesting as techniques for managing intermingled communities of their two important food crops – yellow nut grass (Cyperus esculentus) and wild hyacinth (Dichelostemma pulchella). Up in what is now Wisconsin, the Ojibwe maintained wild rice (Zizania palustris) populations by allowing the earliest ripening grains to fall back into the swamps and protecting the plants from disturbance during early stages of growth.

These managed plant communities didn’t look like what European colonizers recognized as agriculture. To them, agricultural production meant monocultures with plants arranged geometrically or in blocks. There’s also a political reason colonizers ignored First Peoples’ management of these landscapes. It sounds better to say that you’re claiming “wilderness” than to acknowledge you’re stealing land that is managed and cared for.

In Europe, productive and ornamental gardens reflected Abrahamic and GrecoRoman religious traditions’ emphasis on physical order. They showed extensive signs of what Joan Nassauer refers to as “cues to care”—plants in monoculture blocks, geometric arrangement, physical evidence of cultivation such as trimming and mowing.

The only time you see wild-looking plant communities with intermingled plants are as grassland components of agricultural fields. Grazed meadows allowed for the growth of many spring ephemerals—small perennials and bulbs—which would grow and flower before being outcompeted by summer grasses. Such low grassland complexes extended beneath orchards. A famous example of an intermingled plant community would be Botticelli’s Primavera (1482). While most people looking at this painting would consider the symbolism and beauty of the human figures—for a contemporary planting designer, the diversity of flora shown thriving in the grass is the more exciting bit. Some sources claim that over 130 flowering species are depicted in this meadow. Standing in front of the painting, I certainly recognized narcissus, fritillaries, bellis, hawkweed and iris. Such diverse flora isn’t only present in imaginary landscapes. You can still find such flower-rich meadows growing throughout Europe—particularly in the Mediterranean and at higher altitudes. 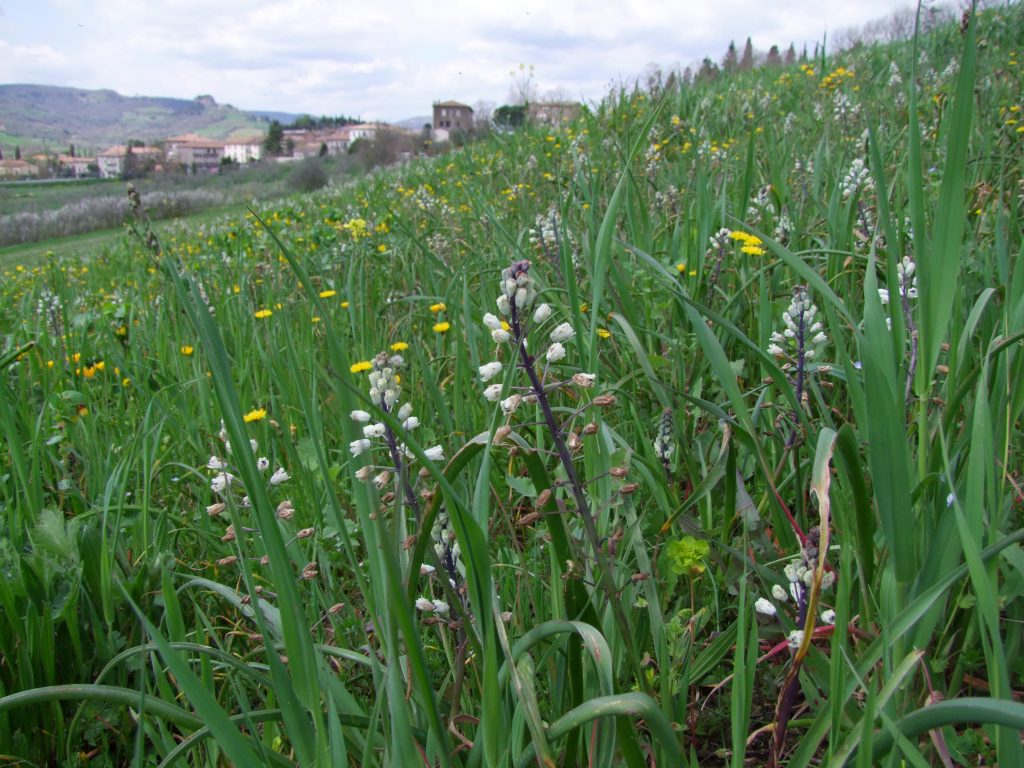 After centuries emphasizing human dominance over nature, the Romantic era brought a new enthusiasm for nature. With populations throughout Europe and the United States beginning to urbanize, nature began to be seen as a source of excitement rather than fear.  Celebrity designers such as Lancelot “Capability” Brown and Humphry Repton created vast landscapes that created an experience of “enhanced nature”. They worked primarily in broad brushstrokes, shaping naturalistic earthforms and drifts of trees. The Romantic approach to landscape design was later adopted by Frederick Law Olmsted in America, creating such works as Central Park in New York City and the Back Bay Fens in Boston—public spaces designed to appear natural, not designed.

At smaller scales, a literature of ornamental gardening for working- and middle-class people began to emerge. Scottish horticulturist John Claudius Loudon developed experience as a landscape planner and agricultural consultant, before establishing the Gardener’s Magazine, the first horticulture-focused magazine in England, in 1823. Loudon’s wife, Jane Wells Webb Loudon, collaborated closely on the Gardener’s Magazine and produced a large body of literature framing gardening as a suitable occupation for women – including titles such as Instructions in Gardening for Ladies, The Ladies’ Flower Garden, Botany for Ladies, and others. The Loudons’ work focused on domestic gardens rather than grand estates. In America, Andrew Jackson Downing was developing his own interpretation of Romantic ideals around landscape and dwelling. His first book, A Treatise on the Theory and Practice of Landscape Gardening, Adapted to North America (1842), was strikingly influential on American domestic gardens – with a particular emphasis on front porches and lawns.

Irish garden designer William Robinson, in particular, was realizing a vision of Romantic values at the planting scale. In his books The Wild Garden (1870) and The English Flower Garden (1883), he proposed a new look for plantings. Rather than emphasizing the grand scale of tree plantings and vast lawns, he focused on vast swathes of herbaceous plants and smaller shrubs. These plantings were designed to look as natural and unplanned as a vast Brown or Olmsted landscape. He introduced the concept of “naturalized” planting – planning for plantings to be dynamic, with individual plants spreading and moving around, rather than being treated as static objects. Robinson worked closely with famed British planting designer and artist Gertrude Jekyll, who is still regarded as the prototypical garden designer and master of the herbaceous border.

A century and more later, it’s easy to see how trends in garden design were being influenced by trends in landscape representation. With photography becoming increasingly accessible, artists explored ever-greater degrees of abstraction. The French impressionists, in particular, represented light and color as diffuse and flickering. The landscapes they portrayed appear to dissolve. Even the bold textures of palms and yuccas shown in Monet’s The Moreno Garden at Bordighera (1884) appear as splinters of light and shadow. Such treatment emphasized the depth and movement of plantings, framing a new way to view the transient effects of light, shadow and color. 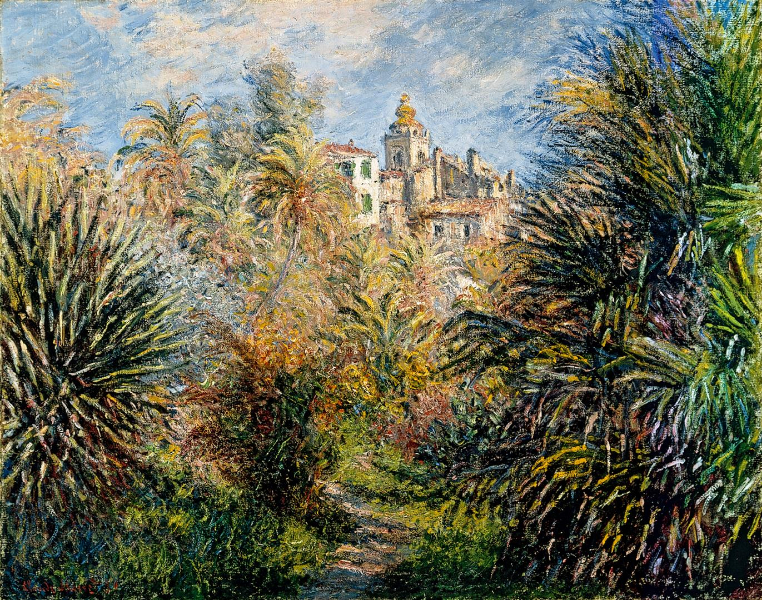 Monet’s The Moreno Garden at Bordighera (1884)

Widespread industrialization led to a renewed artistic interest in authenticity and making—evidenced in the Arts & Crafts Movement. Architects such as William Morris in England, Charles Rennie Mackintosh in Scotland, Gustav Stickley in New York, and the Greene brothers in California emphasized respect for materials and craft, particularly evidenced in domestic architecture. Gardens began to be seen as extensions of the home, with a similar close attention to detail.

With middle-class women achieving greater access to representation, free time, and money, there was an explosion of interest in and writing about domestic gardens. The cottage garden—a romantic fantasy of traditional working class plantings—became popular with early 20th-century influencers. Louise Beebe Wilder in New York and Elizabeth Lawrence in North Carolina were extensively published about cottage gardening for homeowners. In England, Vita Sackville-West wrote extensively about her experience creating the ultimate cottage garden at Sissinghurst. 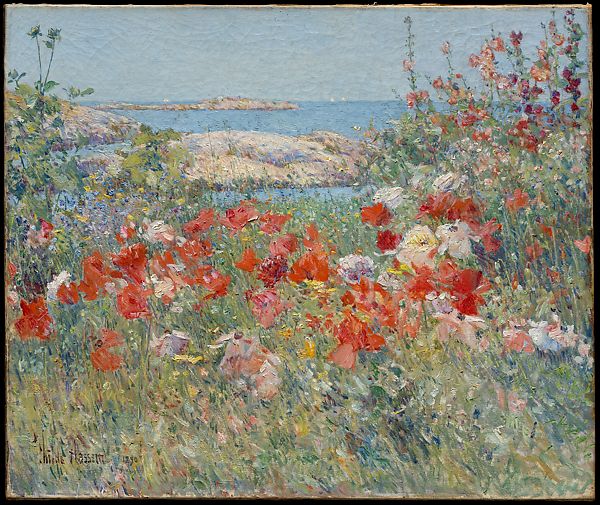 On the Isle of Shoals, in Maine, Celia Thaxter ran a hotel that served as a summer base for writers and artists, including the Impressionist artist Childe Hassam. Every spring, Thaxter would tote hundreds of annual seedlings across from the mainland to plant in the grounds of her hotel. Hassam chronicled the jewel-like intermingled plantings in a series of paintings, including “Celia Thaxter’s Garden, Isle of Shoals, Maine”.

While early 20th-century women were encouraged to make domestic gardens, men were out making noise about the loss of wild landscapes. In the American West, the impacts of uncontrolled exploitation became visible. Game quantities and sizes decreased. Ancient woodlands had been destroyed. The American spiritualist movement espoused by Emerson, Thoureau, and Whitman took a material turn. Theodore Roosevelt’s establishment of the United States Forest Service marked a new phase in American understanding of landscape as more than a resource to be thoughtlessly exploited. The emerging science of ecology established a basis for understanding how natural systems function.

By the mid-20th century, the Arts-and-Crafts gardening tradition and ecological science were being merged in design schools and offices to form the basis of contemporary landscape architecture practice. In England, Dame Sylvia Crowe experimented with different management practices and collaborative teams to understand how planting design could function in the context of projects at different scales. At University of Pennsylvania, Ian McHarg formulated a practice of ecological mapping as a design tool. Rachel Carson’s publication of Silent Spring in 1962 cracked open an international awareness of landscape’s vulnerability.

Today, landscape architects can no longer claim ignorance of the importance of good planting design. Practitioners who care about their work’s success have unparalleled access to knowledge about historical planting and management practices. Rooted in this knowledge, we will be able to create innovative plantings that will confront the challenges of the 21st century, provoking wonder and delight.

Thank you to Naomi Brooks, Dr. Jared Barnes & Sloan Patton for reading progress versions of this piece. Your suggestions and edits were vital, and continue to hone my development as a practitioner and writer. Due to my education and experience, this piece emphasizes European and North American influences and practitioners in contemporary naturalistic planting design. I’m eager for readers to contribute to dialogue about naturalistic planting design and its development in other parts of the world.

Caleb Melchior
Caleb Melchior is a planting designer based in the southeastern United States. He's works with Coastal Vista Design on Sanibel Island in southwest Florida to create playful gardens throughout the Gulf Coast and Caribbean. Caleb has a Masters of Landscape Architecture from Kansas State University, along with extensive experience designing fine gardens and estates in the southeast US. His work is frequently published in national gardening and design publications, including Horticulture and The American Gardener. You can follow Caleb on his blog (calebmelchior.com/journal) or on Instagram @the_curious_gardener. Listen to his podcast with Preston Montague, Growing in Mind, on your favorite podcatcher.