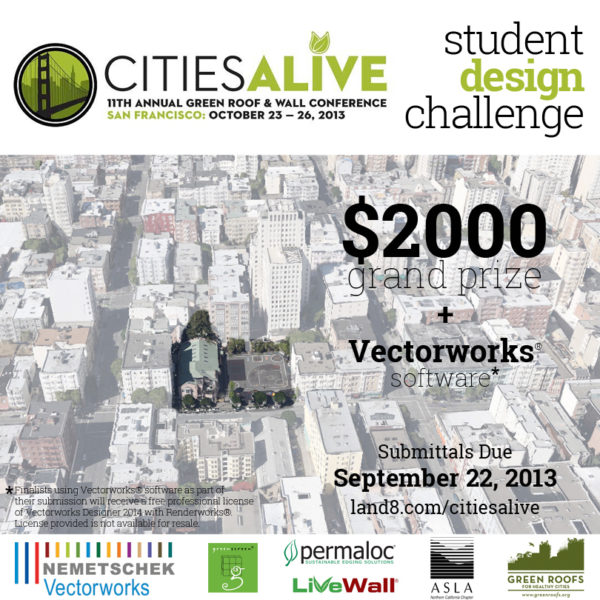 We are excited to announce the CitiesAlive Student Design Challenge!  University students and recent graduates are invited to imagine and create ‘resilient communities’ by using living architecture – green roofs and walls – to redesign a community center in the Tenderloin district of San Francisco, California.

The CitiesAlive Student Design Challenge, hosted here on Land8, is an academic element of the green roof and wall industry’s annual CitiesAlive Green Roof and Wall Conference, which takes place in San Francisco from October 23 – 26 2013 and is hosted by Green Roofs for Healthy Cities in partnership with the City of San Francisco Planning Department and the San Francisco Public Utilities Commission.

Students will submit designs to transform the Tenderloin location – an ethnically diverse but highly urbanized landscape with limited open and recreational space – into a facility that would provide expanded space for the district’s 4,000 children to connect with nature through rooftop and wall green space and gardening, and the chance to learn about sustainable use of energy and water. The contest entry deadline is September 22, 2013.

First place prizing is $2000 cash. The top 8 designs will receive complimentary student passes to the CitiesAlive Green Roof and Wall Conference in October and – for those who used Vectorworks® within their project – a professional license of Vectorworks Designer 2014 with Renderworks®. Winning designs will be displayed at the CitiesAlive trade show on October 23rd and 24th, at a green roof and wall themed event at the Academy of Sciences on October 24th, and featured here on Land8.

CitiesAlive Student Design Challenge judges include esteemed landscape architects and planning professionals from the City of San Francisco’s Departments of Planning and Public Works, plus qualified professionals from the Land8 and Green Roofs for Healthy Cities community. The contest is sponsored by Nemetschek Vectorworks, Inc., greenscreen©, Permaloc, and LiveRoof.