Zollhallen Plaza, Atelier Dreiseitl, Freiburg, Germany. It is undeniable that the relationship between water and our urban areas needs to be given a higher priority to provide integrated solutions for flood risk management, sustainable water use and supply, and the improvement of water quality in our treasured watercourses. Planners and designers should take more account of what we call “water-sensitive urban design”. But what exactly is water-sensitive urban design? A water-sensitive urban design is a land planning and engineering design approach. It takes the urban water cycle, including storm water, groundwater and wastewater management and water supply into urban design. Mitigating on environmental degradation and improving aesthetic and recreational appeal. 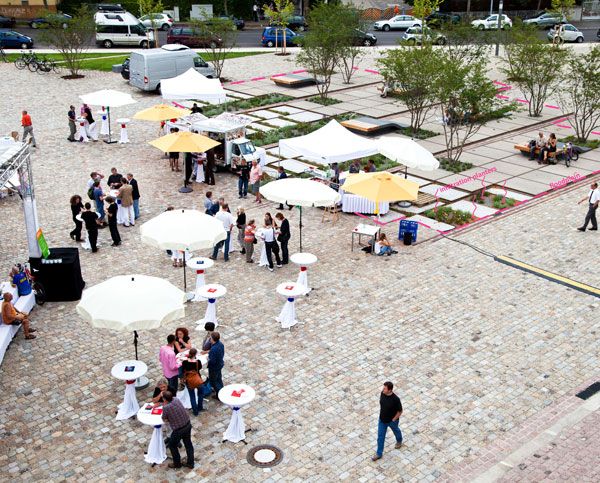 The proof that there is a possibility to create a water- and environment-friendly paved square that is also beautiful and successful is Zollhallen Plaza in Freiburg, Germany. The square, designed by Atelier Dreiseitl, is a fine example of water-sensitive urban design – so sensitive, in fact, that they were able to disconnect the square from the sewer system. 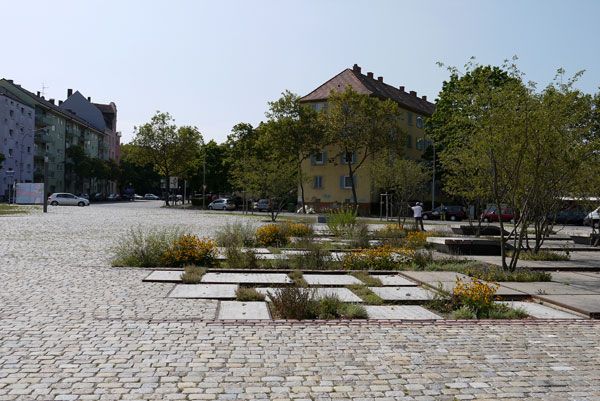 A Strong Attention to Water Infiltration After the historic customs hall on the Zollhallen Plaza was restored in 2009, Atelier Dreiseitl redesigned the square as a new open place with a lot of attention to water infiltration. The square is designed so that all the water that ends up on the surface infiltrates into the subsoil without even one drop disappearing into the sewer system. 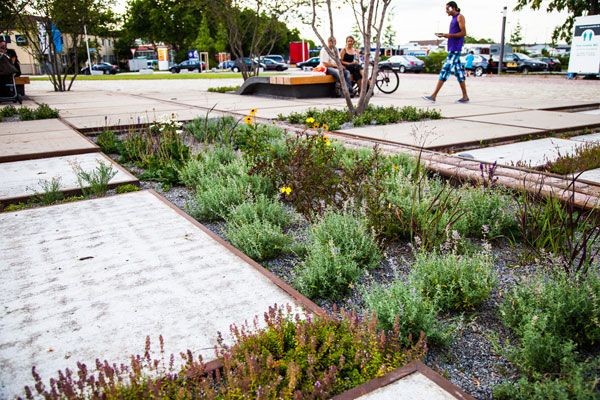 A Site for the 100-Year Flood To provide good drainage, the topography of the plaza is positioned so that the water always runs to the water-permeable zones covered with plantings. The square is built taking into account three water brackets: one for the regular rain, one for the 10-year rain event, and a third for the 100-year flood. See More Projects Featuring Atelier Dreiseitl:

The Main Water Infiltration Zone The zone for the regular rainwater storage is the main water infiltration zone. This is also the resting place with a lot of planters. It is made of big, permeable slabs in which old rail tracks are inlaid into permeable paving, playing with the historic past of the site as a rail yard. 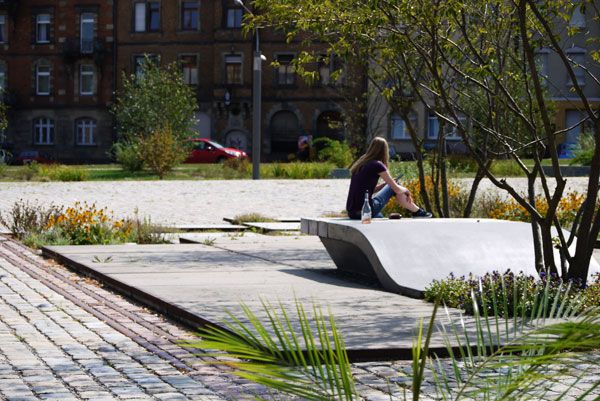 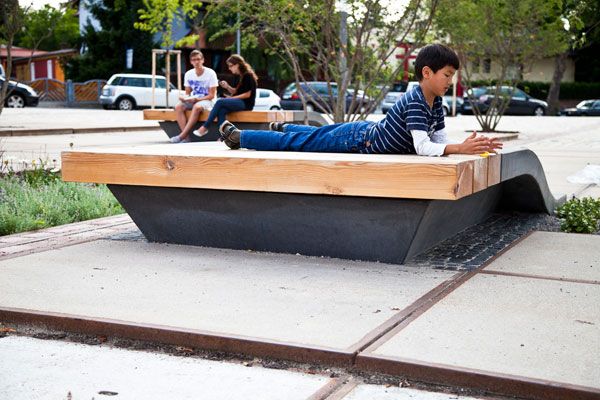 The Break Nose Benches The benches refer to the break noses of rail tracks. And Zollhallen, the name of the square, means customs hall, referring to the historic customs hall. Planters filled with cherry trees provide the perfect amount of shade while expediting infiltration, and the perennials and ornamental grasses give an attractive softness. Ready for a Flood For the decennial rain event, Atelier Dreiseitl provided a cistern under the soil wherein excess water via a drainage gradient is collected. From an overflow pipe in the cistern, the water goes to water storage boxes, where it slowly infiltrates into the subsoil. During the 100-year flood, a large part of the square will be under water. In order to keep it a bit under control, they provided a safety zone that will stay dry, which is located somewhat higher and keeps the water from spreading. This flood zone will allow the water to slowly infiltrate through the permeable paving and planters. No rainwater is fed into the sewer system; instead, the groundwater table is recharged. 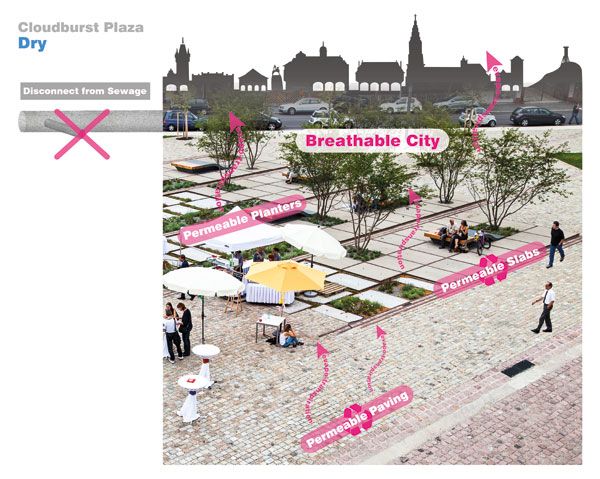 A Fine Example of Environmentally Friendly Design In the field of environmentally friendly design, the Zollhallen Plaza is, therefore, a fine example. The rainwater is filtered by the plants, which meanwhile extract nutrients for themselves. The groundwater table is recharged by subsurface gravel trenches with an innovative built-in filter medium that slowly releases water to the subsoil. The used hardscape materials are 100 percent recycled from the old rail yard, reducing the costs and supply of new materials, while also harmonizing with the new, clean, modern design with the historic architecture of the customs hall. 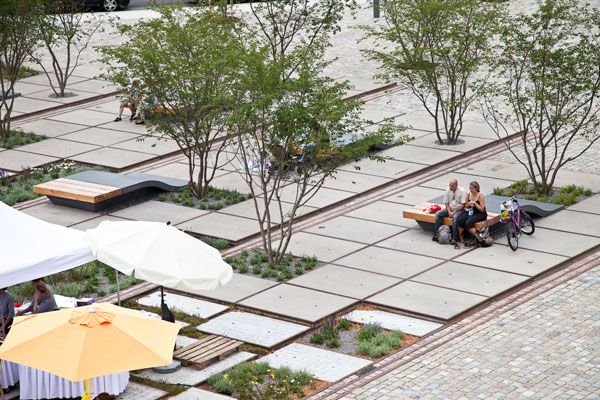 What can learn from Zollhallen Plaza? With this project, Atelier Dreiseitl shows novice but also experienced landscape designers that it is possible to combine urban design with a thoughtful water infiltration solution. The infiltration of water in public spaces is probably not the only thing landscape designers should give a higher priority. What do you think designers need to take more into account? Let us know! 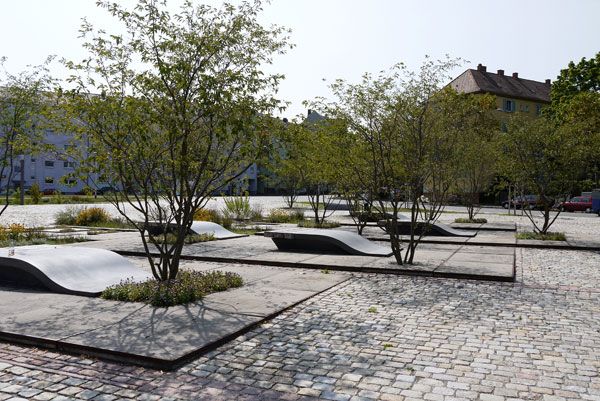