Imagine having access to every street tree in your city, essentially having the urban forest at your fingertips. The New York City Street Tree Map does just that, giving users access to information about every street tree in New York City. The map shows the location of every single tree, in all five boroughs, along the city’s sidewalks and streets, with information such as size and ecological benefits of each tree. In the final episode of Remarkable Objects, we learn about the effort that went into building this robust program, and its advantages, from Jennifer Greenfeld, Assistant Commissioner for Forestry, Horticulture, and Natural Resources at the New York City Department of Parks & Recreation.

New York City recruited over 2,200 of its residents to assist in the census of the city’s street trees— over half a million in all (683,993 as I write this post). This community-driven effort utilized a low-cost, simple method, established by TreeKIT, to map trees. Using a surveyor’s wheel to locate the tree and a smartphone to record data about the condition and species of the tree, volunteers were easily able to map their streets. Training sessions took place to help the volunteers, especially in tree identification and condition. While similar data has been collected in the city before, this is the first time the data was made public, and charted on an interactive map. Other cities have been collecting data on their trees too, such as Washington, D.C. and San Francisco, but the NYC Street Tree Map is a uniquely accessible tool, and the world’s most accurate and detailed map of a city’s street trees. 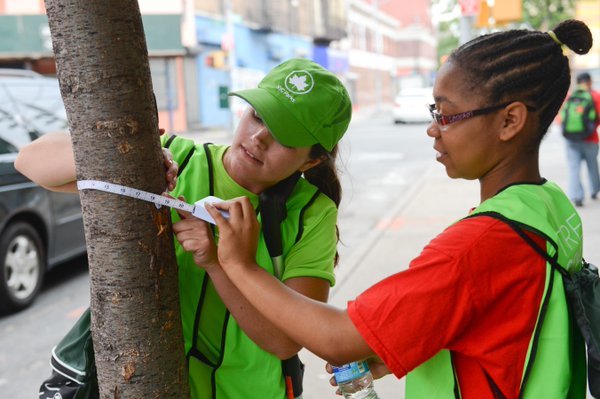 As Jennifer puts it, this dynamic tool essentially allows for the managing and planning for nature in the city. Jennifer says of the easy-to-follow website, “We knew that if we were really going to be serious about engaging people, we needed to give them a better platform to work on.” The map is a way of visualizing and sharing the information that is used to manage New York City’s urban forest every day. The site allows users to report problems, record a caretaking activity, or request a tree planting, inviting the public to interact with their urban forest in ways that may have previously gone unnoticed. Recently completed tree care activities, such as pruning or mulching, are recorded and listed on the website, allowing clear communication between the department and the public. Ideally, the data collected will inform future care and tree-planting efforts, and allows the department to reach the trees that need care.

The effort has not only been valuable for managing trees, but also for engaging citizens, both during the data-gathering period and afterwards, as caretaking is needed. To promote data collection, volunteers were encouraged with special tree-counting days, a Guinness World Record event, and a recognition event. The map is a living document, constantly being updated based on these citizen’s activities and requests. The website is also engaging, sharing information on tree care tips, stewardship groups in the area, and tree planting events. The website also allows users to mark trees as favorites and share them with their friends, bringing tree hugging into the 21st century. 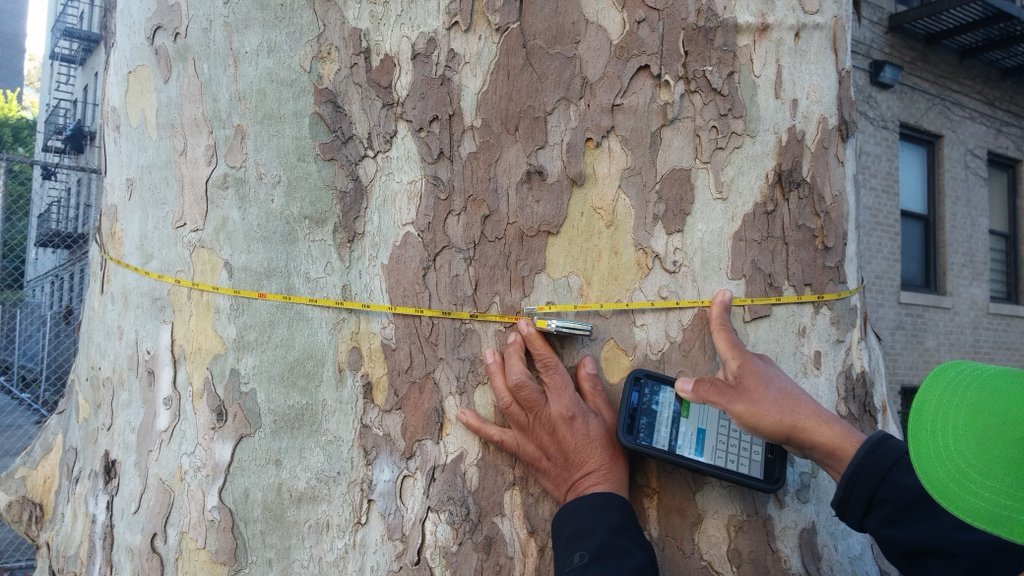 This massive 121″ London Planetree was mapped by volunteers in the Bronx. Fun Fact: The most common street tree species in NYC is the London Planetree, making up 13% of trees on the Street Tree Map. Image courtesy of NYCTreesCount.

In addition, the data collection effort allowed the city to quantify the benefits these street trees provide to the city. Based on a formula developed by the Center for Urban Forest Research, an individual tree’s environmental and economic benefits were calculated depending on its species, size, and location. For example, a single Japanese Pagoda tree on Old Fulton Street in Brooklyn conserves 1,499 kWh of energy each year, valued at $189.29 in yearly savings. Collectively, these benefits include over 1.1 billion gallons of stormwater intercepted each year, and over half a million tons of carbon dioxide reduced each year, totaling $111,186,737.92 of annual savings – and counting.

According to the 2016 census, there are 12.5% more trees in the city than there was when the last census was taken, in 2006. There are, of course, still parts of the city that are lacking tree cover. Jennifer said there are more than 200,000 planting spaces that are currently empty where trees could go. This is where the data is particularly useful, both as a database for locating where trees are needed, and as a tool for expressing the many benefits tree plantings provide. Being able to show that trees improve the health of a city in a measurable way makes it easier to advocate for the growth and caretaking of the urban forest. Jennifer hopes the data will help build more advocacy and awareness for the city’s street trees and what they provide.

—
Episode 8 is the final episode of Remarkable Objects, a podcast about the intersection of nature and urban design, hosted by Leda Marritz, Creative Director at DeepRoot. I hope you have enjoyed my reviews of each episode, as part of the DeepRoot and Land8 partnership. If you’ve missed an episode, listen on Soundcloud or iTunes.

Stephanie Marino is a landscape architect practicing in Baltimore, Maryland.