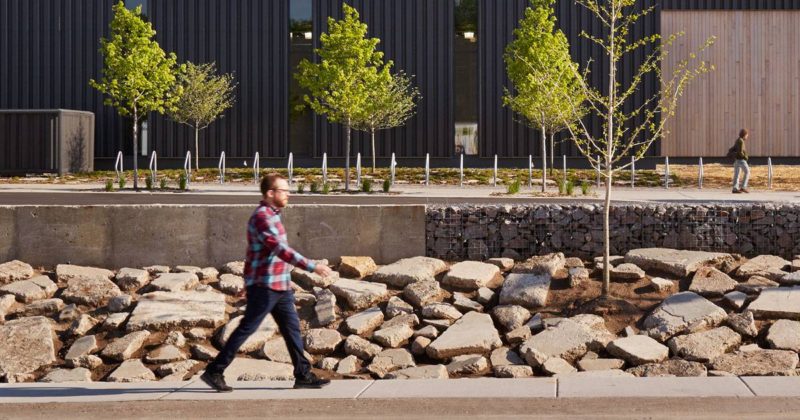 Article by Meenal Suresh – Surly Destination Brewery, by HGA,  in Minneapolis, MN, USA In its most simple definition, a brewery is a place where beer is produced commercially. But can a brewery also be a unique and welcoming public gathering space? The Surly Brewery in Minneapolis shows that it can. This brewery isn’t just a space for crafting beer; it has also become a homeground for cultural activities, owing to its surprisingly festive environment in a working industrial space.

The AIA Minnesota Honour Awards Jury commented: “This brash, industrial project’s exterior space really grabbed our attention – this project almost straddled the line into urban design. It focuses on catering to the future demands while making a mark in the present.” What makes this hot property a worthy visit for beer enthusiasts and tourists alike? Here, we decode how it became a brand in and of itself. 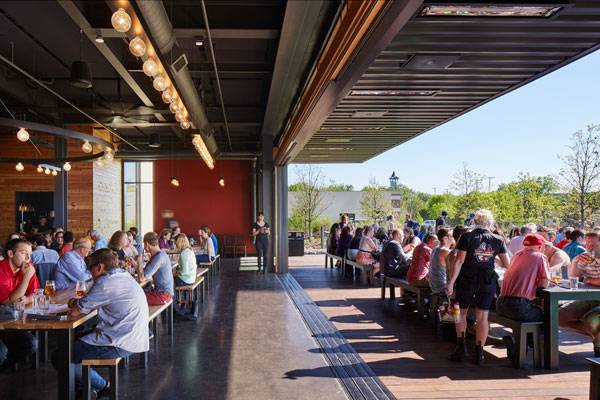 The Surly Brewing Company in nearby Brooklyn Center had reached its production limits and was struggling to meet the needs of consumers in 2011. The solution was a new brewery that not only met the local need, but also reached out to international tourists and beer enthusiasts. This facility was designed on the multivenue concept (similar to Stone Brewery in San Diego and Stiegel Brewery in Austria), in which consumers can observe the beer-making process and also enjoy the finished product on site. But first Surly had to overcome a major obstacle: state law prohibited breweries from making, selling, and serving beer all on the same site. Voices were raised, the law was amended, and the “Taproom Bill” or “Surly Bill” went into effect. 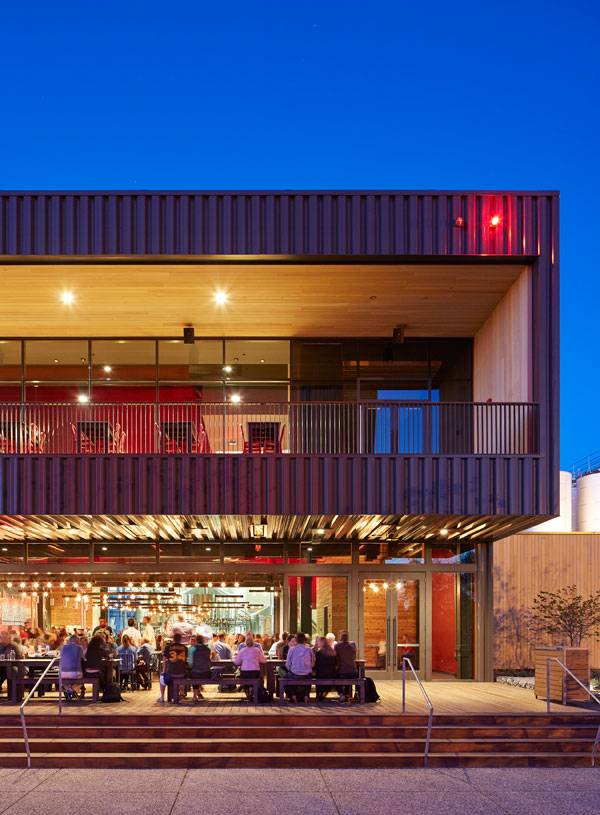 The location of the new brewery played a pivotal role, playing up the site’s advantages while turning certain challenges into benefits. Situated near the University of Minnesota’s Twin Cities campus, Surly Brewery is connected to the rest of the city through an excellent transportation network of light rail transit and local highways, making supply, shipping, and visiting easy. It also draws water from Surly’s Brooklyn Center facility, ensuring that both branches provide same-tasting brews. 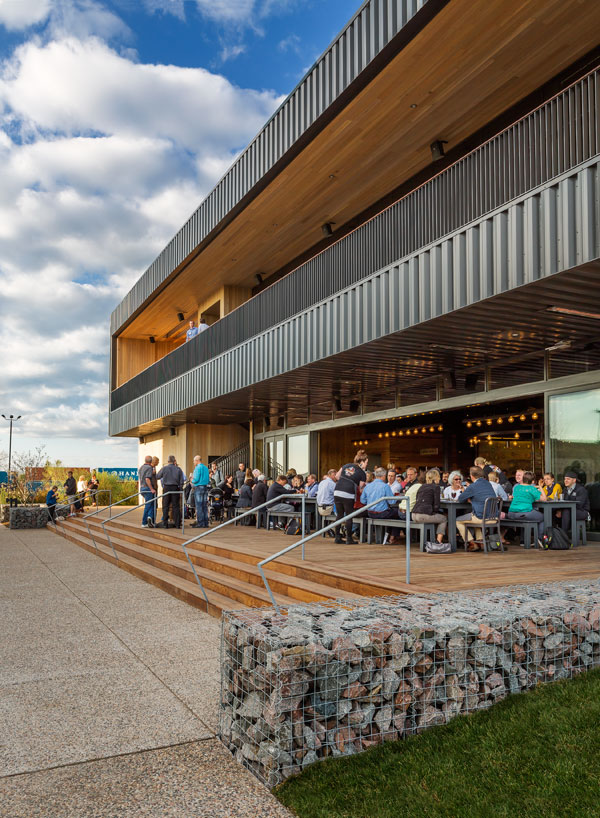 3. A Regenerative Greening Project – Toward a Sustainable Future

The 8.3-acre site is comprised of seven separate parcels of land, divided by the municipalities of Minneapolis and St. Paul, which meant many laws and jurisdictions had to be taken into consideration. It was also a brownfield site that previously housed many industries, the latest being a potato-processing plant. This meant the industrial park had to be replenished, especially since hazardous methane gas was escaping from the soil. A membrane floor and structural concrete slab with continuous ventilation were employed after all the drains were located, ensuring that all of the utilities were operated on ground and only the drains ran below. 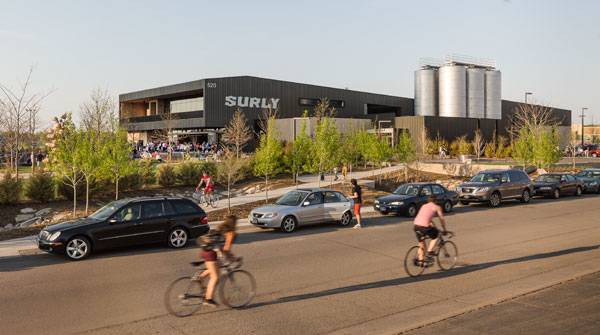 4. Exposed Architecture – “It’s In You Face” Inspired by German beer gardens, the goal was to bind visitors to the brewing process while providing them with a community experience, entertainment, access, and safety, all while satisfying the production needs of a state-of-the-art brewery. The site consists of a brewery, beer garden, beer hall, private beer hall, and fine dining. The building is designed to be a lean, mean brewing machine. It is raw, gritty, and exposes Surly as it is, which works beautifully in its favor. 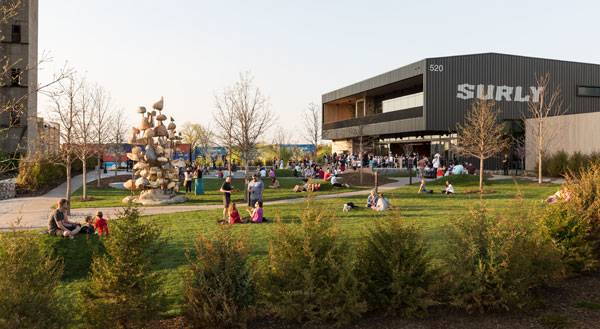 The exterior is clad in corrugated steel panels and western red cedar, with capped, low-slung, flat rooflines that make the space look somehow elegant. As Steven Dwyer, AIA lead designer, explains, “Visitors pass a large fire ring and a water feature—visual and auditory appetizers before entering the building.” The brick paving guides visitors from the entry plaza to the heart of the facility. On entering the brew house, one faces “the beer temple” — rows of suspended funnels of holding tanks, whose pattern will become more impressive with the addition of more funnels in the future. 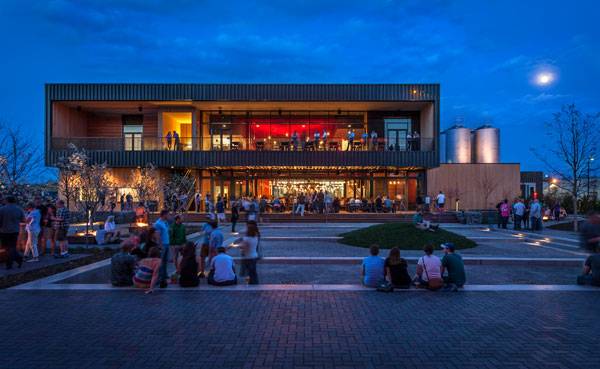 The three-story house is enclosed in floor-to-ceiling glass walls, making the brewing process completely transparent. Contrary to the popular outlook of an industrial space, the high ceilings, clerestory windows, and tubular skylight devices make these areas seem light and airy. The interiors are washed in the Surly brand colors of red, gold, and black. 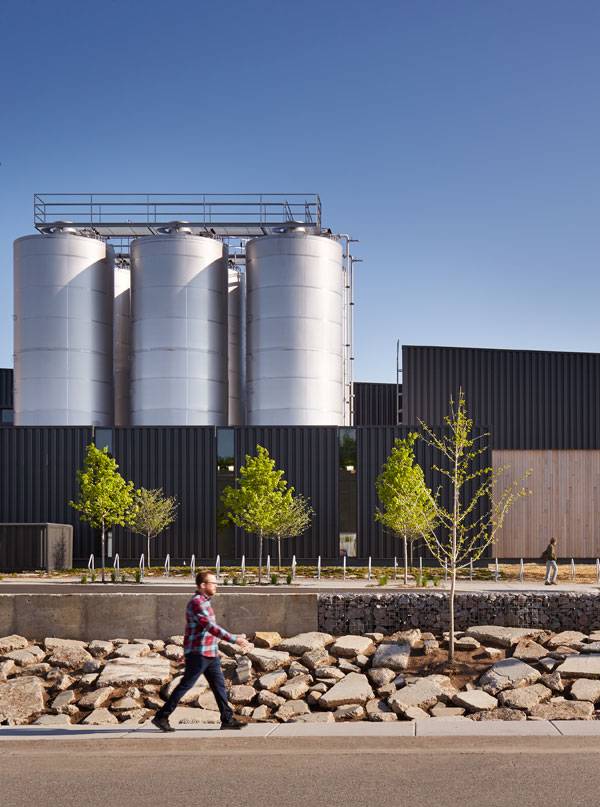 One then proceeds to the open beer hall, with the typical long, communal-style tables. Black metal and cedar are used throughout the beer hall. The hall is flanked by the brew house, the beer garden and deck, an amphitheater, and a free-flowing, 10-foot-high space. Overlooking the hall on the upper level is the formal Brewer’s Table Restaurant, with pre-function, events, and bar areas. An adjacent outdoor deck looks upon the gardens and interactive spaces. 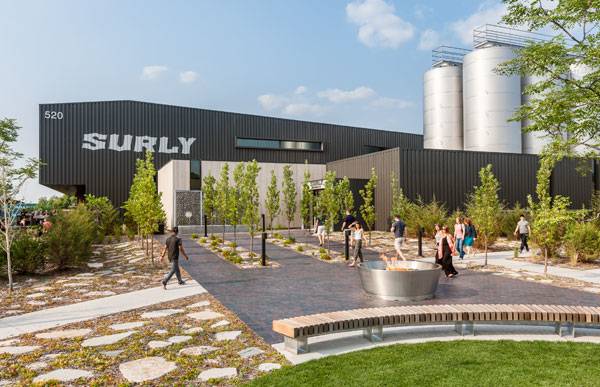 Drawing from the industrial setting of the brewery, HGA Architects and interior designers turned worn-out materials into innovative elements that give an edge to the brewery. Exposed concrete slabs were formed into retaining walls. Steel, glass, and reclaimed wood from trees blown down in a tornado were turned into table tops and metal panels, and recycled plastic Coke bottles became designer chairs.

The beer garden is surrounded by a series of gabion walls and a dense hedge of red cedars that can be segregated into three smaller pockets, providing visitors multiple choices to suit their mood. The Grove, as the name suggests, is a forest of honeylocust and serviceberry trees surrounding the flexible seating area of picnic tables and benches around a fire pit. It is reminiscent of a camping site. The crushed granite surface of the Greek-style terraced amphitheater looks over the stage and is backed by an artistic turf mound. Probably the most informal space on the site is the Spill Garden. 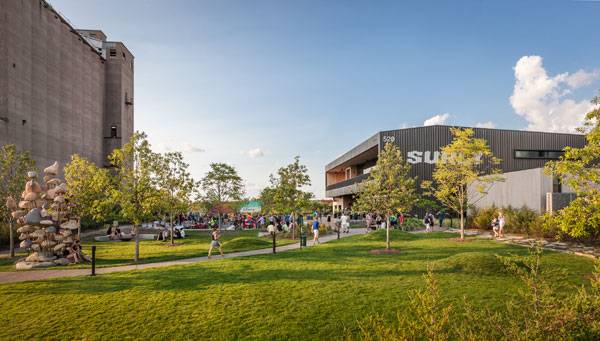 Reminiscent of an abstract painting, it is made of numerous turf landforms, fire pits, informal focal points, and perennial plants that together form one composition. The beer garden as a whole has a sense of mystery around it, piquing curiosity. As Dwyer says: “From the day the facility opened, the customer has owned the space. The building, along with a carefully choreographed tour route and curated graphics, (immerses visitors) in the Surly Destination Brewery experience — a brand in and of itself.” The design on the whole is like a work of art. The overall placement and organization of the various spaces, ranging from one-on-one dialogue areas to an assortment of community elements. Each is strategically linked with the people, as well as with the interrelationships between these individual elements, making Surly Brewery a sterling composition worth visiting. Do you think destination breweries such as Surly, where the brewing is as important as the experience and memories, are changing the design fabric? Leave your comments below. 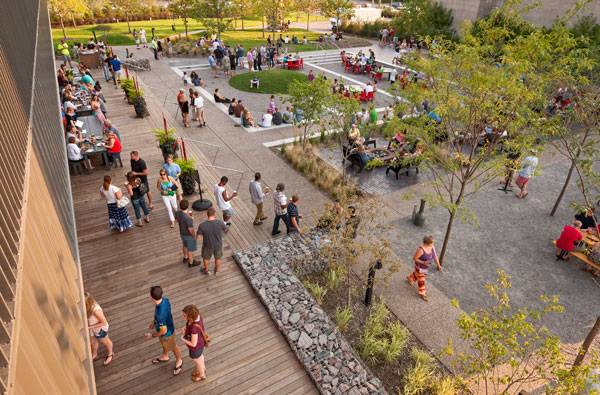