Article by Lidija Šuster Neue Meile, by Bauchplan, in Böblingen, Germany. Taking a closer look at how they use LED Technology What happens when a street is not just a physical connection between two landmarks? What if the street becomes an attraction itself rather than simple route for pedestrians? The landscape architects of Bauchplan gave us the perfect answer – linking the railway station and center of old town of Böblingen, in a way that’s more than usual. Transforming the car-friendly space into a pedestrian’s area was surely not an easy task. The landscape architects were faced with many obstacles in putting together safety, a specific location, attractiveness and comfort, and making the space both functional and beautiful at the same time. 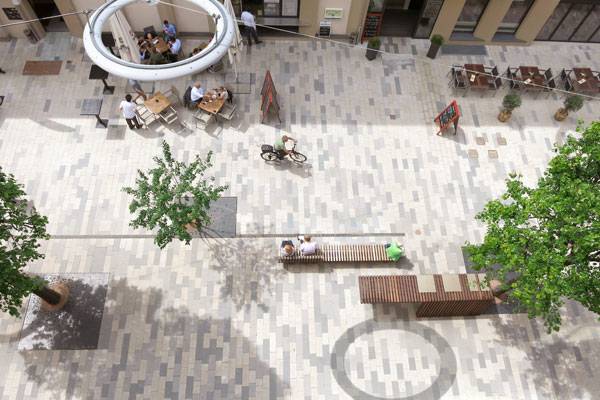 Using lighting in a different way than ordinary helps to those characteristics become conjoined, and here innovative LED lighting plays a major role. Imagine giant-sized light rings that are hovering above the ground, magically glowing when it’s night and catching your eye during the day. Sounds magnificent, don’t you think? Thanks to the manufacturer Bergmeister Leuchten and light planners at Lumen3 Lighting Design, as well as the contribution by OSRAM of the innovative LED technology, the landscape architects of Bauchplan were able to bring to life this very unique space. 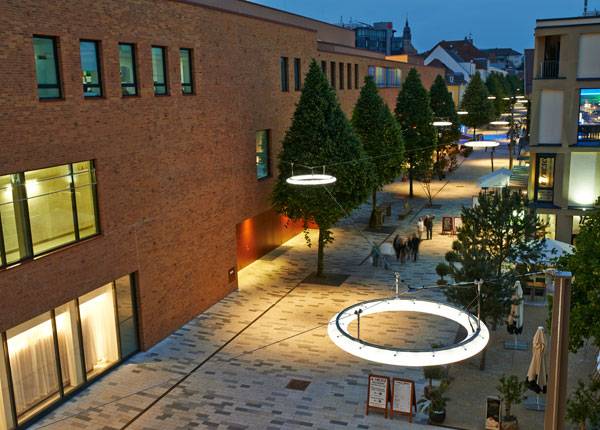 Transforming the Bahnhofstraße into Neue Meile When you think about lights in a certain area, what comes up in your mind? For sure you can think about security. And that is very important thing that people need in public spaces – a feeling of safety. If you provide them with that feeling, people will visit that space more often and actually enjoy staying there. When arranging a safe place, landscape architects are privileged to do that with unleashed imagination. 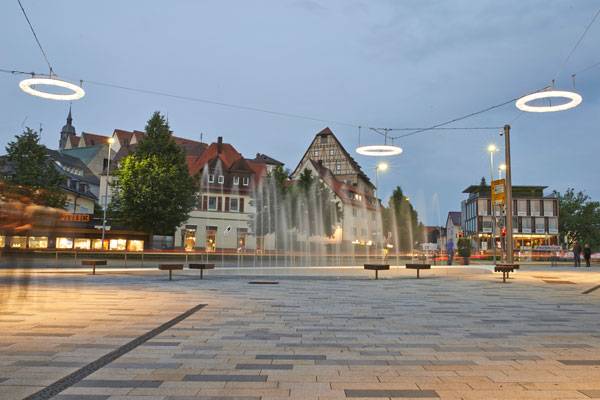 Transforming the „Bahnhofstraße“ into an outstanding pedestrian zone was quite a challenge – railway stations are, in many cities, not considered to be spaces of public events or civic attractiveness. The main goal of this project was to make an unique and striking atmosphere. Cooperation of Technology, Imagination and Sustainability The magic happens when the sun goes down – there are 24 illuminated floating rings, each 2.5 meters in diameter, welcoming the pedestrians. The most important characteristic of these rings is that this illumination supports economic sustainability by reducing urban light emissions. Meaning, an LED street light can produce the same amount of luminescence as a traditional light, but requires only half of the power consumption. 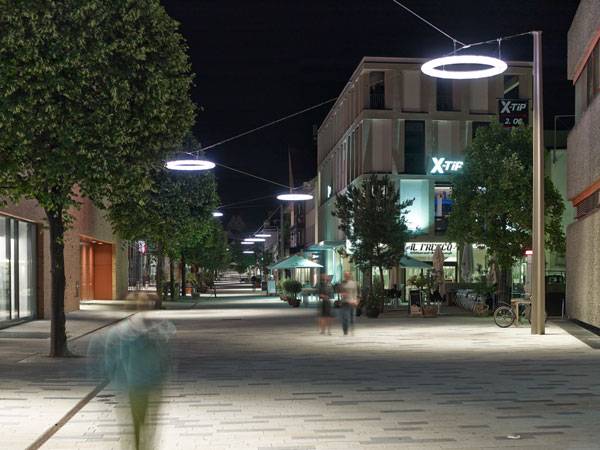 Why Use LED Lights? Also, in comparison with conventional lighting, LED lights have a two to four times longer life span. Another good thing here, for some people anyway, is that freakish-looking and spooky nocturnal insects are less attracted to LED lighting – they find more appealing the ultraviolet energy emitted by conventional lights. This is not only good for timid people, but also for the maintenance of precious wildlife. That means that insects will stay comfortably located in their natural habitat instead of being attracted to artificial lights. Their predators will also benefit, and the natural balance will be less harmed. 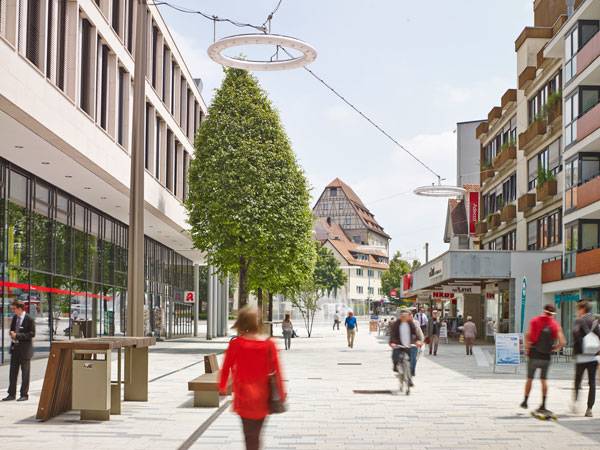 The Day and Night Experiences During the day those rounded installations are casting interesting shadows on the surface below them, but the night-time impact of this kind of illumination is guaranteed. Any space that is illuminated at night is more inviting and friendlier. Here it is also the case – when lights are on, the feeling of safety and warmth is on, too. The glimmering, semi-transparent rings (with fourteen LED spots each) are specially designed to illuminate without glare, each of them creating a rounded pool of interesting light with a different intensity. Also, they can change to any color, which makes them suitable for different atmospheres needed for special occasions or events. 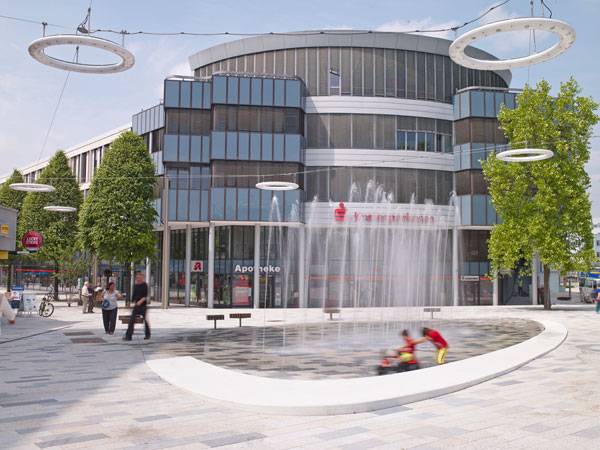 Their unusual appearance could look like some miniature UFOs that are mystically hovering above the street, but everything is left to people’s imagination and spatial perception. Enrichment with Elements on the Ground Of course, the complete atmosphere is achieved with elements on the ground. Natural stone pavement spreads all over the street with a pixel-like appearance. The numerous rectangular granite stones provide an interesting floor in various hues of cream and grey, reminding one of some hand-made tapestry attached to the ground. Water – A Vital Landscape Element Further, there is another vital landscape element that is always advisable to be included in design – and you’ve probably guessed it – water. Water has always been present in all kinds of spaces. So we have it here in Neue Meile, and it’s successfully implemented in the overall design in the form of a dry-deck fountain. 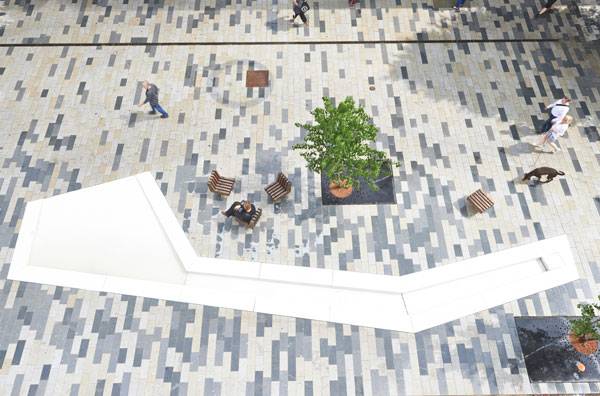 These types of fountains are very attractive and catchy for the eye, due to their ability to bring rhythm and movement to the space. They are special because they have a hidden structure, which means that we see water splashing up from the ground, but that the equipment needed for making the splashes is under ground. Neue Meile fountain has thirty jets – three rows with ten jets each. Also, the fountain acoustically affects the space and, if not totally, at least partially shuts down the annoying sound of traffic. 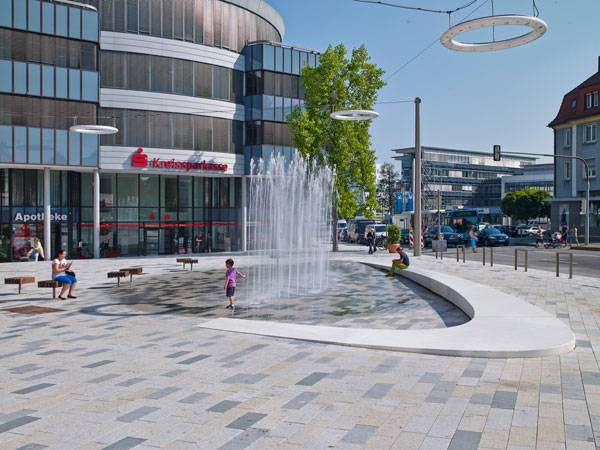 Circles, Cubes and Rectangles Considering that the objects in the air are all circular elements, down on the earth there are cubes and rectangles – and with that use of different shapes is accomplished diversity and contrast in the space. Tree grids and drainage covers are cube-shaped and follow specifically designed drainage channels. Street furniture includes bike counters, post-benches, outdoor sofas and freely rotating single seats. 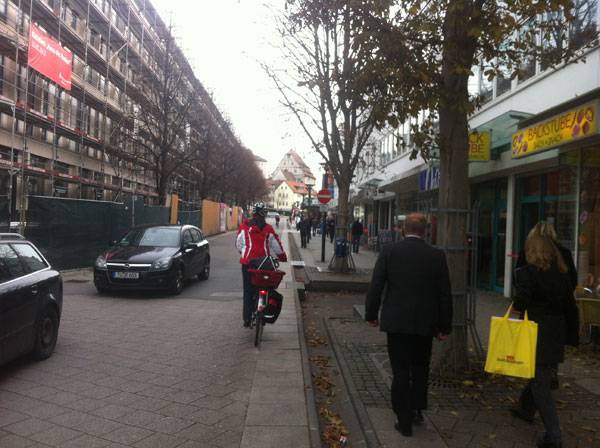 These are made of steel substructures with thermo-wood slats out of local ash timber. All of this furniture is natural-coloured – varieties of soft-brown – which follow the natural colour of wood. Long benches provide enough space for sitting, and the rotating single seats can be interpreted as equipment for kids to play on. Thanks to the good location and now rich pedestrian traffic, this space is becoming more and more popular. Its extraordinary features make it outstanding and recognizable, and that is especially highlighted with natural materials and the innovative lighting technology. What do you think, is this kind of LED technology a new way to improve the look of our streets? Let us know in the comment section below! Go to comments 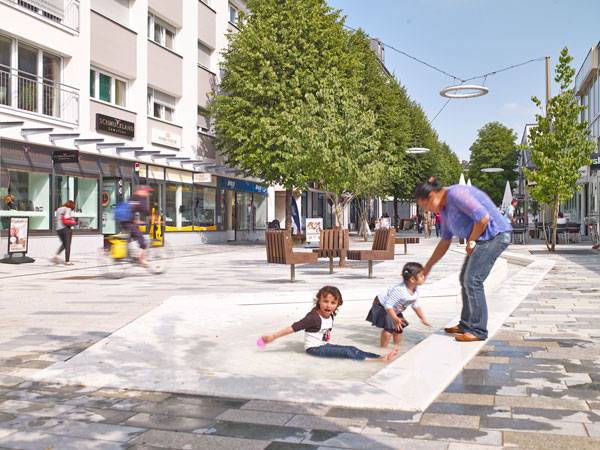