Article by Andrea Robezzati – A review of Holstebro Storaa Stream,  OKRA Landschapsarchitecten, located in Holstebro, Denmark. Finnish architect Eliel Saarinen once said, “Always design a thing by considering it in its next larger context; a chair in a room, a room in a house, a house in an environment, an environment in a city plan”. That first small change can lead to a ripple effect in an ever-growing pool. In the small Danish city of Holstebro, a competition to create a dance theater became an opportunity to redefine all of the surrounding public space. The Dutch architectural firm OKRA won the competition in 2006, and in just a few years they managed to transform this part of the city from a neglected space into a catalyst of change for future development. Let’s learn how this was possible! 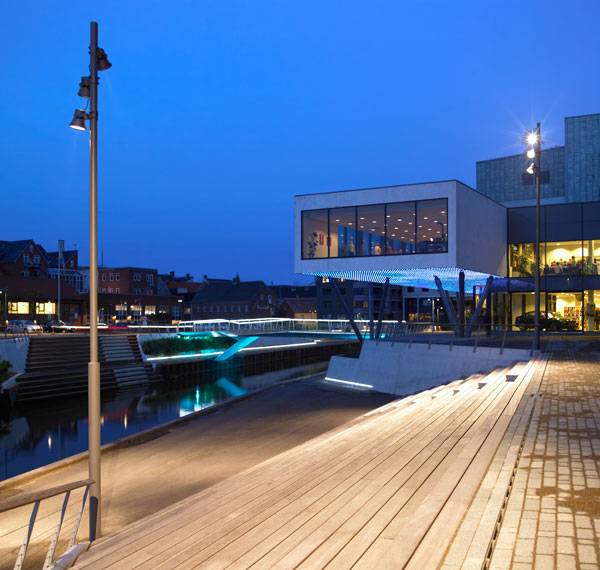 The River: When Limits Become Opportunities Storaa is a small river that cut the city of Holstebro into two parts: the north and the south. Before the project, this water space was neglected, abandoned, and dominated by the backs of commercial activities and parking lots. Time after time, step by step, the city had turned its back on the water and it became a space without life. With this project, OKRA landscape architects have transformed the river from a problem to an opportunity, from a separator to a key element. In fact, we can say that the river has become the focal point of the entire project! 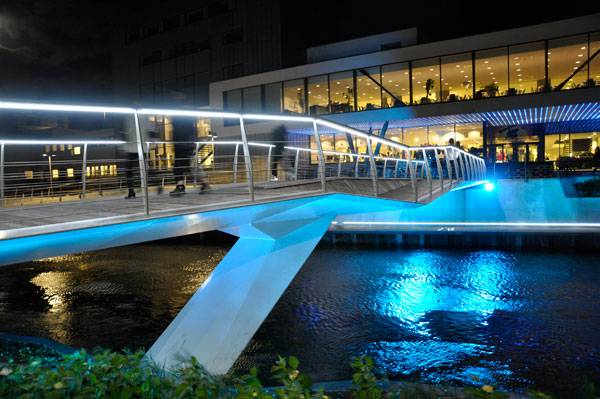 The architects have transformed the riverside from a backside with functional connections into a “place to be”; much more attractive and full of quality, linking the north and the south part of the city. Walking along the Storaa river today means enjoying a revived space, an outdoor stage that serves the city and that in the near future will be the catalyst for further development. 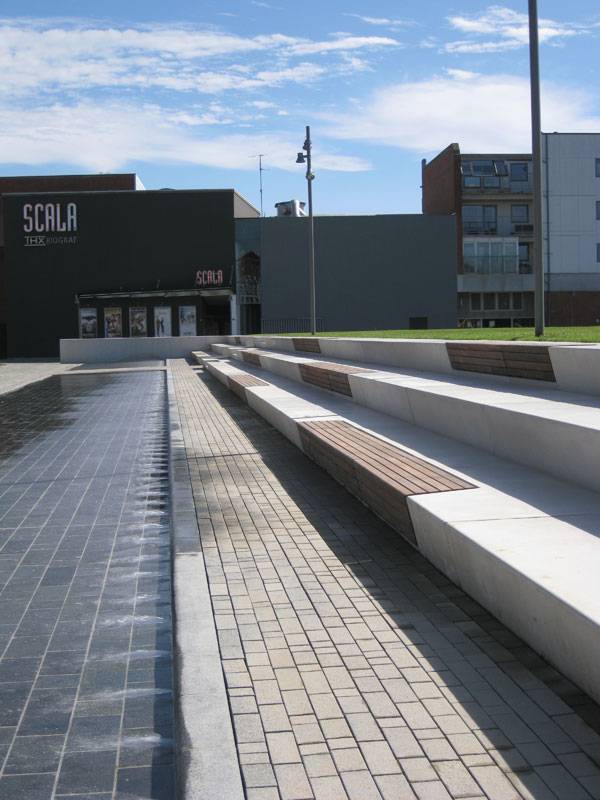 A Folding Space Today, the riverside walk along Storaa is an open theater adjacent to the river, where the scene is dominated by the bridge, the water, and a folding designed space. This sort of “sculptural space” was created by working with the idea of a continuous space where sometimes the fold is a path, sometimes a small landscaped spot, or sometimes simply a place to sit. 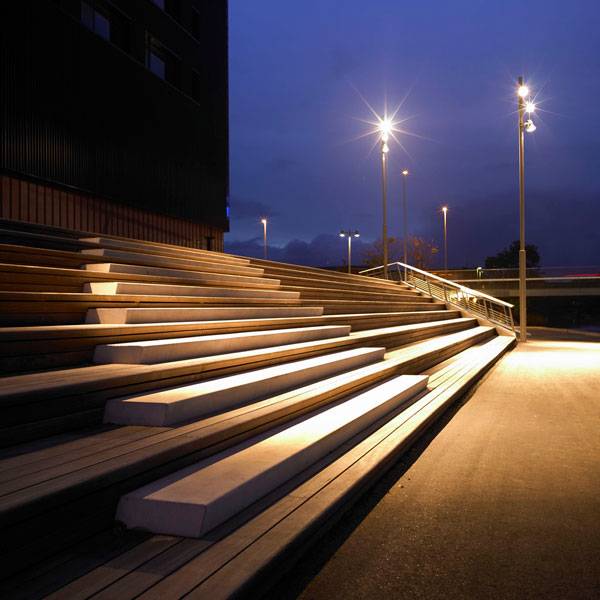 Logical routes for pedestrians and bicycles are provided in an informal way through the creation of smooth inclines that guide them in an enjoyable experience. Along the riversides, visitors can sit and just relax and watch the water flow, or on other days, watch small or large events that can take place in the newly-created spaces such as the south bank, where a stage area has been constructed, with steps to sit on. 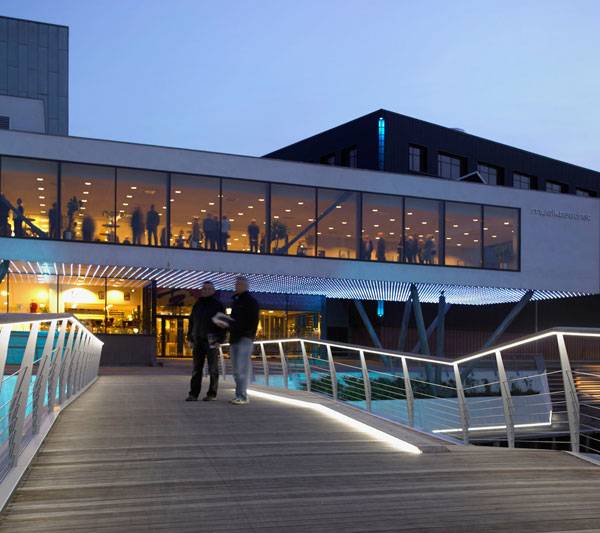 The bridge, designed in the central position, tying together the folded urban realm of both riverbanks, offers you different options, you can cross it, sit on the designed bench whilst speaking to a friend, or just watch the nice scenery from its many vantage points. 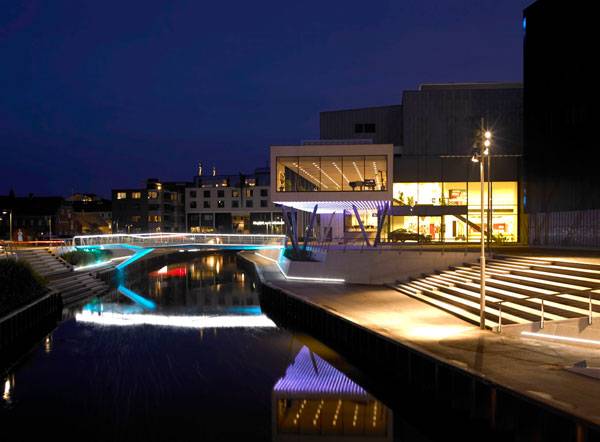 Inside/Outside If is true that landscape architecture regards outdoor projects, is also true that this is not a rule. In this project OKRA architects demonstrate that a landscape project can be something more: it can establish a strong relationship between the inside and outside space. 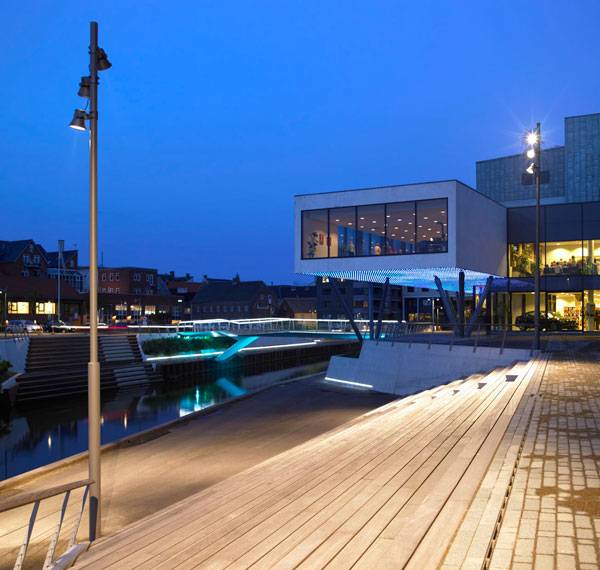 The public square located on the south side of the theater is not just an outdoor designed space but is the reflection of the inside space of the neighboring building; the public realm expresses the activities in the building. The square becomes literally an outdoor theater; a dynamic scene where people are the main actors and where the scene can change and offer different experiences. 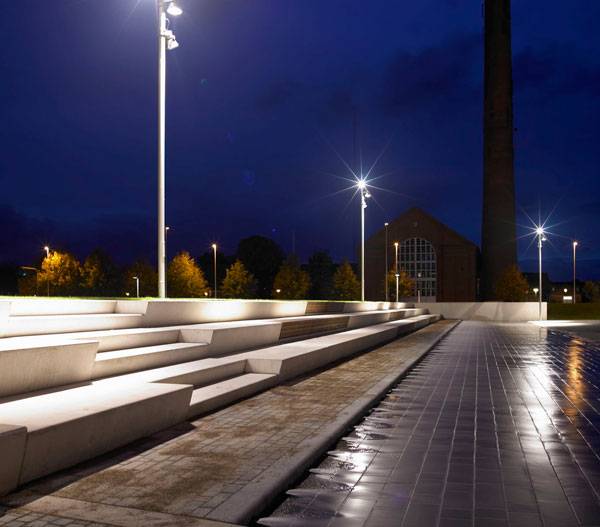 A film of water on a paved area can be a fountain or become a place where children can play. Sometimes the dynamic theater square becomes just an object to watch from the long stairs designed around the stage. These are a little bit higher than the rest of the area, keeping it free from the surroundings and free from view of cars. They are also combined with a vast dike, planted with trees on a lawn. 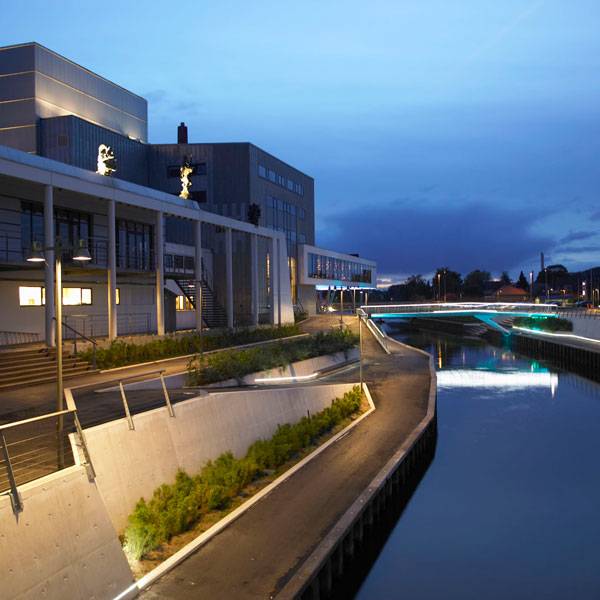 A Vibrant Space In this project special attention has been given to the lighting plan. If you take a walk during the evening along the riverside walks, what you can see is more than just direct artificial lights; the vibrant space will accompany you and keep you enjoying a positive sense of the journey. The lights contribute to the picture of the area when it presents a theater-like impact during the evening hours, especially during the winter. They reinforce the urban use of the public realm and create a sense of scenery based on a program of additional dynamic light, which plays with the visitor. Activities from the theater building can expand to the riverside and use the bridge as a stage. Really exciting!

The Power of a Single Piece

This project is a clear example how a single building – just one piece — can change the meaning of an entire neighborhood and, by extension, an entire city. Every single project is always part of something bigger, and it always establishes a new relationship with its surroundings. Again, we discover how landscape architecture is one important key for achieving a successful design for the cities of tomorrow. As OKRA has shown with this project, the goal is not just to respond to one question, but to trigger a process and have a larger vision, with the common goal of creating better cities. Are you ready to be part of this process? 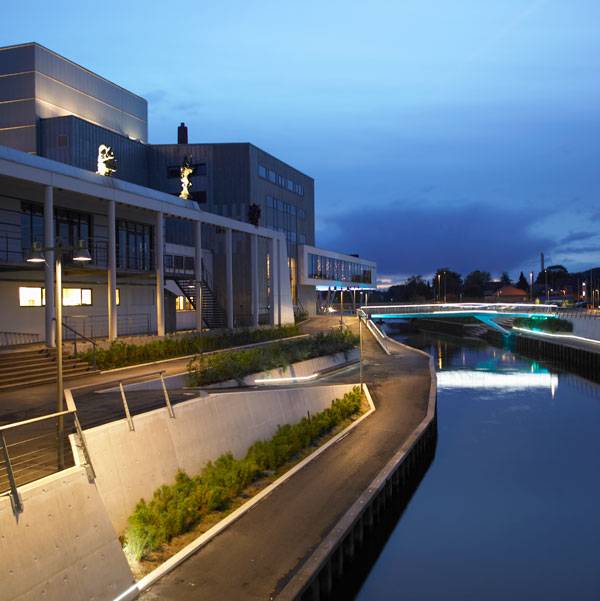