Dyslexia in Design – A deeper look at how Dyslexia has bonded with the world of design.  The lexicography of the word dyslexia translates as ‘trouble with words’ from the Greek ‘dys’ meaning ‘bad, abnormal or difficult’ and ‘lexis’ meaning ‘word’.  In popular culture the term dyslexia is primarily employed to describe children and young people who have a specific learning disability with regards to written language.  Historically, other terms used synonymously with dyslexia have included ‘word blindness’ and ‘strephosymbolia’. Both of these terms focus on the difficulties faced by dyslexics, thus defining them by what they can’t do, rather than what they can. 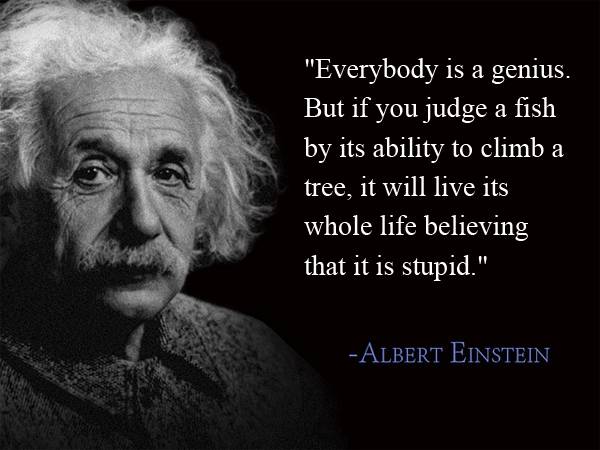 The Problem It is estimated that dyslexia affects 4-5% of the UK population. With such low figures, it is, perhaps, surprising that dyslexia remains such an important issue for learning. Difficulties in other areas of the school curriculum are not so well documented. For example, some people find playing the piano difficult. No matter how hard they try they simply never master it. Despite this lack of ability, there is no term to describe people for whom playing the piano is difficult. This is because in modern society the ability to play the piano fluently is simply not as important as the ability to read and write. The ability to read is fundamental to how we are taught at school, college, and university.   Dyslexics, therefore, might well feel disadvantaged, or marginalized by mainstream academia. Background 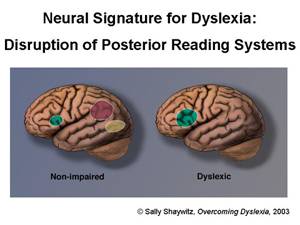 The historical understanding of dyslexia as a form of ‘word blindness’ is unhelpful. Dyslexia is much more than a difficulty with words. There are several cognitive differences between the dyslexic and non-dyslexic brain. Whilst the academic manifestations of these differences may present as a disability, there are some significant, (if specific) advantages to being dyslexic! Dyslexia is thought to be a hereditary condition which affects the temporal parietal lobe of the brain which is partly responsible for interpretation of sensory information, including visual stimuli. The image above shows two brains engaged in the act of reading. On the left a non-dyslexic brain is showing activity in a range of areas throughout the brain, whilst the dyslexic brain on the right utilizes fewer areas of the brain. A dyslexic utilizes less of their posterior (rear) brain when reading and thus uses more of their anterior (front) brain to compensate. It is the frontal sections of the brain that are responsible for emotion, problem-solving, reasoning, and planning.  These are all areas in which dyslexics have been found to be strong. Dyslexics are often of above average intelligence with good problem solving skills. Leonardo Da Vinci was thought to be dyslexic. Much of his work exhibited the tell-tale signs of being disorganized and non-sequential. However, he is generally thought of as having one of the most creative minds in history. From inventing new methods of painting (including improving oil paints and inventing a new form of fresco painting), to inventing the world’s first parachute and an early prototype of a helicopter, Da Vinci never stopped thinking and creating. Dyslexics Are Often Very Inquisitive Da Vinci is quoted as saying ‘I want to know everything’. He set about doing this by working tirelessly on art, science, architecture, mechanics and music. Albert Einstein did not talk until he was 3 years old and was generally thought of as being unintelligent, even dropping out of school early.  It is now widely recognized that Einstein was probably dyslexic. Einstein’s preferred method of working involved ‘thought experiments’. These experiments involved a little more than simply thinking about a problem and all its possible solutions until the most likely solution presented itself. Many people would describe this as ‘day-dreaming’, which is, of course, what many dyslexic children are criticized for in class! But daydreaming is an important tool for creativity. In this interview Richard Rogers (now Baron Richard of Riverside), talks about his dyslexia and overcoming his academic failings in early life, to become one of the world’s most celebrated architects. His former business partner and equally celebrated architect, Norman Foster (now Baron Foster of Thames Bank), is also alleged to be dyslexic.

Good Spatial Understanding Is Vital To Being An Architect Dyslexics often have an increased spatial awareness and are able to think of abstract objects in three dimensions. This makes them extremely attractive to employers seeking spatial awareness. It is rumored that NASA actively employs dyslexics for their spatial awareness and problem solving skills – over 50% of their employees are dyslexic. For many dyslexics, there is a real struggle and stigma attached to the traditional interpretation of dyslexia as a disability. However, in the design and creativity industry it would appear there are some distinct advantages to being dyslexic. Recommended reading: