Arkitektgruppen Cubus AS, a Norwegian office from Bergen have won a competition for a waterfront in Mo i Rana in the north of Norway. The concept: maintaining the identity of an area, but at the same time infusing it with a new pulse by carefully placing recognizable and innovative spatial elements in strategic places. Over time the transformed hotspots will start working as a continuum, offering a wide range of activities for leisure, play and inspiration. This is the main idea behind the project for the Norwegian city of Mo I Rana. The project took place on the fjord coastline bordering the town’s densely built up space, with a view to the magnificent natural landscape around.

The module-based design of the seafront promenade facilitates it for new recreational activities. The seafront promenade will be retained as a mainly natural landscape with indigenous flora and fauna. The area closer inland bordering the housing belt will be developed to a higher degree of cultivation with a park-like character with flowering plants forming the border to the gardens. The southernmost area will be laid out with trees, lawns, paths and lighting- a general green park for strolling and play. Mo I Rana’s economy has rested mainly on the industrial processing of steel and concrete. These industries have been of major importance for the growth and identity of the region as a whole, and have had a dominating influence on the built seafront, since this is where the factories lie. 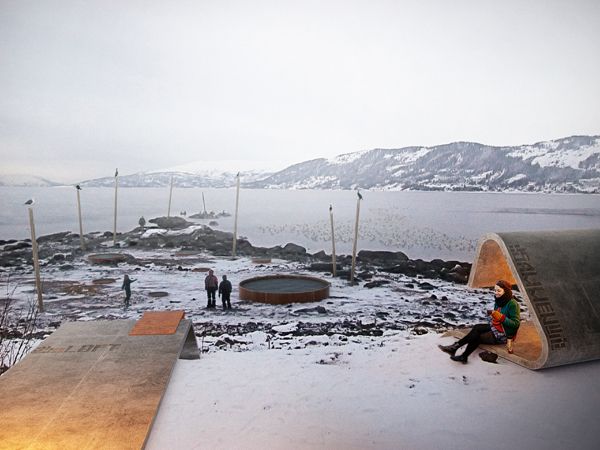 The spatial modules are aimed to be produced in the local industrial factories rather than imposing design strategies and materials from elsewhere. The proposal involves the design of a series of large scale spatial modules, used to transform the local terrain and microclimate to provide places for shelter, sitting, reclining, access, connection between levels, play and sport, as well as evoke curiosity. By allowing local knowledge and technology to be a design parameter, the project will be deeply rooted in the local identity and an expression of the pride and capability of the local community. It also allows for innovation in local industry by establishing a new production line for use in the seafront project. 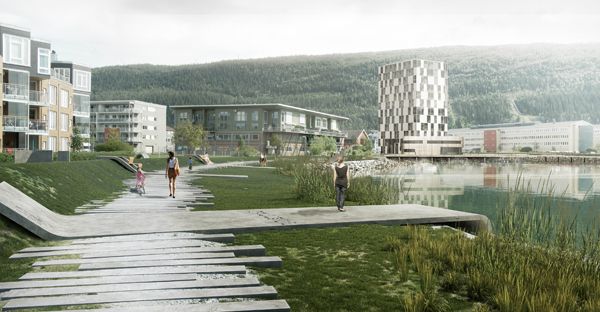 The designers’ main purpose is to strengthen the sense of identity and pride in the project through the use of traditional technology and innovative design and perhaps inspire a new wave of regeneration for both the industry and the town. The modules are used to enhance and highlight nature along the coast which also contrast with extraordinary places like the skating area. It is a path going above the fjord and also a place for brave skaters. Below: Slides of the modular components in the design.
Old construction elements form new spaces: rails, bowls and bumps. Perhaps inspiring new tricks based on old traditions. In the winter the steelworks will provide for skiing, snowboarding and sledging for varying abilities whilst also being a place to rest whilst enjoying the seaview. The two-fold function of the modules also includes the protection for the soil from erosion as well as a seating place in the sunset beach area. The new walkway provides improved access to the beach.Unlike many other projects, this one has no defined borders as the designers decide to reserve an area at the end of the seafront promenade for the future needs. It also provides more flexible and general green space with lawns, trees and lighting for walking, cycling and playing. The project is sensible to the needs of the area whilst it also evokes the creativity and playfulness inside us. The idea that we can be part of the creation of our environment as the ones that inhabit it and know it most is a truly appealing idea.