In a conversation with writer Nicholas Bueskingkeys, top plantsman, Roy Diblik explains the keys to successful low-maintenance planting. Over the past decade, Roy Diblik has become a prominent name in Midwestern perennials. He runs Northwind Perennial Farm in southern Wisconsin, which supplies some of the largest perennial wholesale companies in the area. He has never received formal education in horticulture. Nevertheless, today Chicago is sprinkled with prominent displays of his work: Lurie Garden, Shedd Aquarium, and the Gary Comer Youth Center, among others. He has become a leading advocate for a paradigm shift in the planting industry, alongside other notable plantsmen including Piet Oudolf and Adam Woodruff. 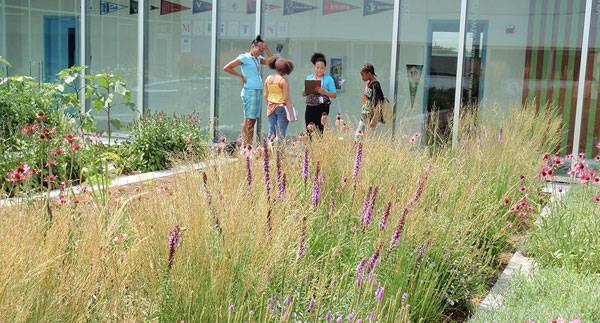 Recently, I had the chance to have a conversation with Roy Diblik . As we talked over the phone, Diblik was walking through the new renovations of Grant Park, just down Michigan Avenue from Lurie Garden. He was humble but keen-minded, and his passion for his work was obvious. “We need a philosophical change on how to make the Earth green,” Diblik told me. He said he believes society needs to move away from the heritage of inherently unsustainable gardens. The practice of cramming many high-performing exotics together—stemming from traditional French and English gardens—often results in a landscape of clashing needs. 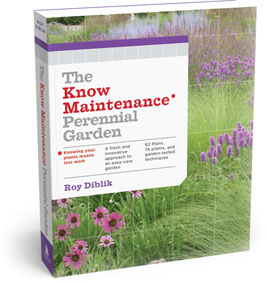 Front cover of The Know Maintenance Perennial Garden, by Roy Diblik. Pick up your copy here!

These gardens consequently require high maintenance. Diblik criticized the need to pour resources into these highly artificial, unsustainable landscapes through weeding, watering, fertilizing, and mulching. Diblik focuses on creating low-maintenance landscapes by understanding plant culture, a philosophy detailed in his book, “The Know Maintenance Perennial Garden”. We have to interpret how plants live on Earth, he urges and use that knowledge to form communities that work well together. Communities will support each other and often naturally complement each other aesthetically. Once established, they can also sustain themselves by reseeding. Dense communities cover the ground, push out weeds and create their own mulch. This eliminates major efforts in weeding and watering once a planting has established. Spring ephemerals or well-chosen bulbs can also provide competition for weeds early in the growing season, then fade into the background when perennials emerge. 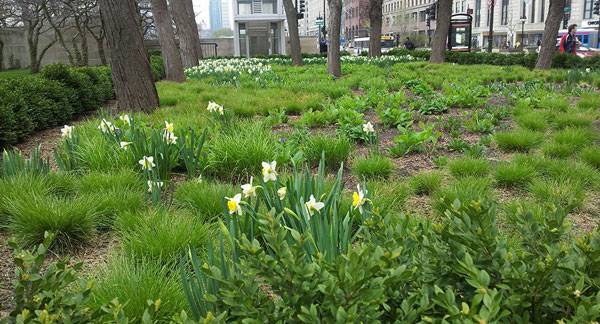 The gardens at the Art Institute in Chicago demonstrate the concept of creating herbaceous coverage in order to push out weeds. Bulbs such as the tulips sprinkled throughout the foreground and background help provide early season interest and coverage while other perennials are getting started. Image credit: Northwind Perennial Farm

What Makes a Good Man-Made Prairie

To achieve these communities in the Midwest, Diblik frequently turns to the prairie. Discussing what makes a good man-made prairie, Diblik hedges a bit. The quality of a “good” outcome can vary, he says, likening it to cuisine. Some people are satisfied with a big, juicy burger. Others would prefer to dine at a five-star French restaurant. Yes, a prairie with low species diversity is still a prairie, but it will not compare to the biodiversity and ecological benefit of a truly healthy prairie. Early in our conversation, Diblik commented that he was interested to see how the recent work on Grant Park had taken shape. He had some early involvement in the project but had eventually moved on. The concerns he had then were still there; the planting beds were much too small for seeding. 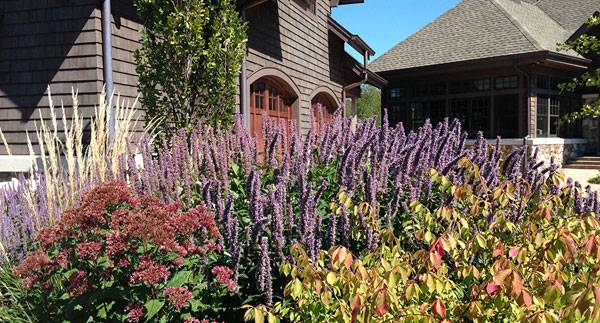 A community-based planting at a Wisconsin residence illustrates the exuberance that can be created through the mixture of color and texture in a small area. Image credit: Northwind Perennial Farm

He explained that a seed-based prairie project often looks unsightly as it matures. In the wrong context, a poorly executed project can cause pushback against the concept of naturalized plantings. Near the end of our conversation, though, Diblik noted wryly that despite his concerns, Grant Park was packed in the middle of a weekday.

How to Make Sure Seeding Works

Seeding works best in large areas in which a large diversity can be achieved through the seed mixes. Gradually, the species will eventually establish themselves where they are happiest. In small-scale plantings, the same range of species cannot be achieved. For plantings in residential beds, civic spaces, and parkways—where plugs and containerized plantings are more appropriate—Diblik recommends multi-stage planting, for maintenance and budgetary reasons. Diblik starts with plants that will eliminate work. These are plants that clump together to become the substrate of his planting matrices. In this phase, grasses and sedges predominate. Their density reduces the need for weeding down the line. In a second stage, he adds plants that add color and form to the landscape. 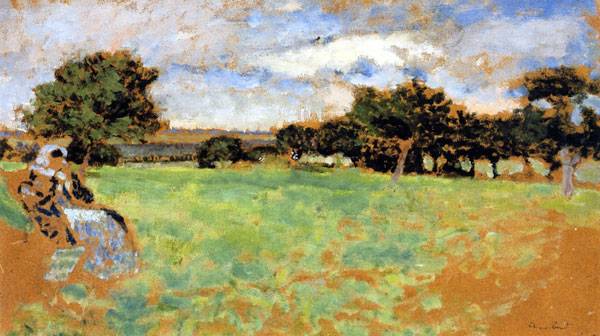 Madame Hessel Sitting in a Meadow in Normandy, by Edouard Vuillard. 1905.

When designing plantings, Diblik systematizes the plants into three general categories: background plants that unify, plants that work best in groups, and high-interest plants that can stand by themselves. Drawing inspiration from the impressionist painter Edward Vuillard, Diblik subtly mixes shades, shapes, and textures to form an overall composition.

Once the project has been installed, the work is not yet complete. Developing a healthy prairie takes more than a single burst of planting. Too often, the client, the developer, or even the designer expects instant results, an irony in a field inherently reliant on time. When seeding, it takes years of continual analysis and reseeding to get a prairie that is balanced and can sustain itself. Without continuous seeding, a few species such as Echinacea, Aster, and Solidago—the “thugs” as Diblik calls them—dominate and greatly reduce the biodiversity and aesthetic complexity of the planting. The process is not fast. Diblik says that the tweaking process could last up to 18 years from initial installation, although often it is much shorter. Diblik says he finds a certain elegance in the extended effort, calling it the “beauty of time and patience to get it right.” 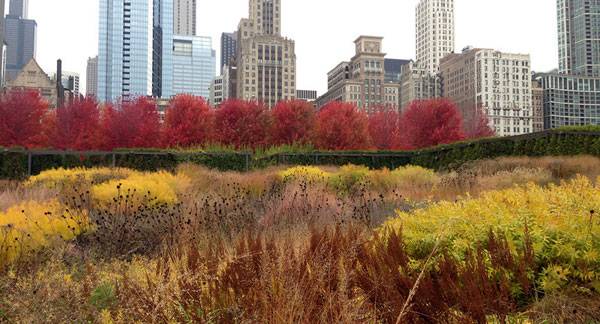 In 2004, Diblik worked alongside Piet Oudolf during the creation the Lurie Garden, which has become a poignant example of the aesthetic and ecological value of natural planting. The garden consciously mixes natives with species from around the world, emphasizing the creation of cooperative plant communities over geo-biological boundaries. 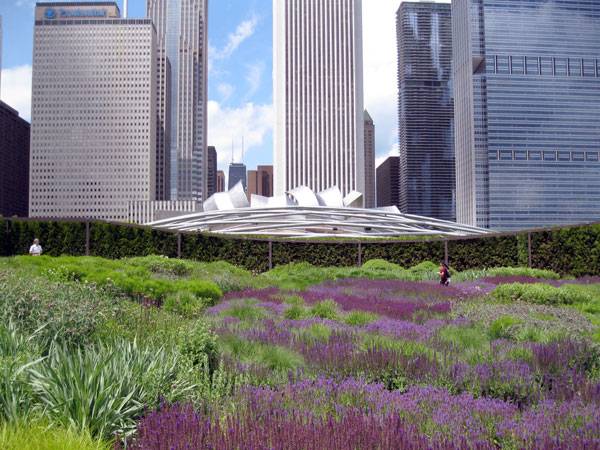 “Lurie Garden in sun” by Ruhrfisch (talk) – Photographed it myself. Licensed under GFDL via Wikimedia Commons

Diblik said the experience of working with Piet has given him hope. Projects such as Lurie Garden and the Highline are setting a new tone in the planting world. It is a change in ecological and aesthetic values that has been successful only because Oudolf intimately understands how the components work. 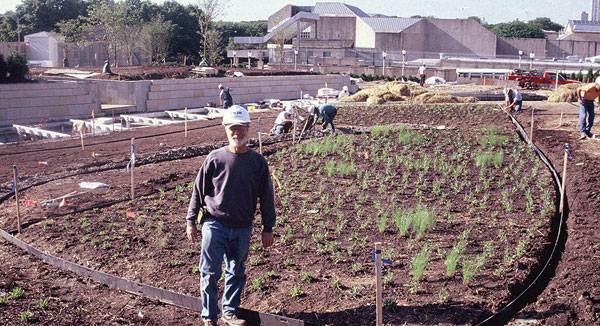 Diblik cautions, however, that creating intelligent plant communities must come from “knowing how to write.” A writer can use a lot of words without putting a good sentence together. If other designers simply copy this new style and do not understand the balance that plant communities provide, the shift in paradigm that plantsmen such as Roy are spearheading will become a parody of itself. On the other hand, if designers begin to grasp the importance of plant communities, the field of landscape architecture will move toward the creation of landscapes that demand fewer resources and provide greater ecological value to the built environment than those of previous generations. Will Landscape Architects grasp the importance of plant communities? Let us know in the comments Go to comments Recommended Reading: